Gov. Newsom's proposed cost of living increases could stave off cuts for some school districts 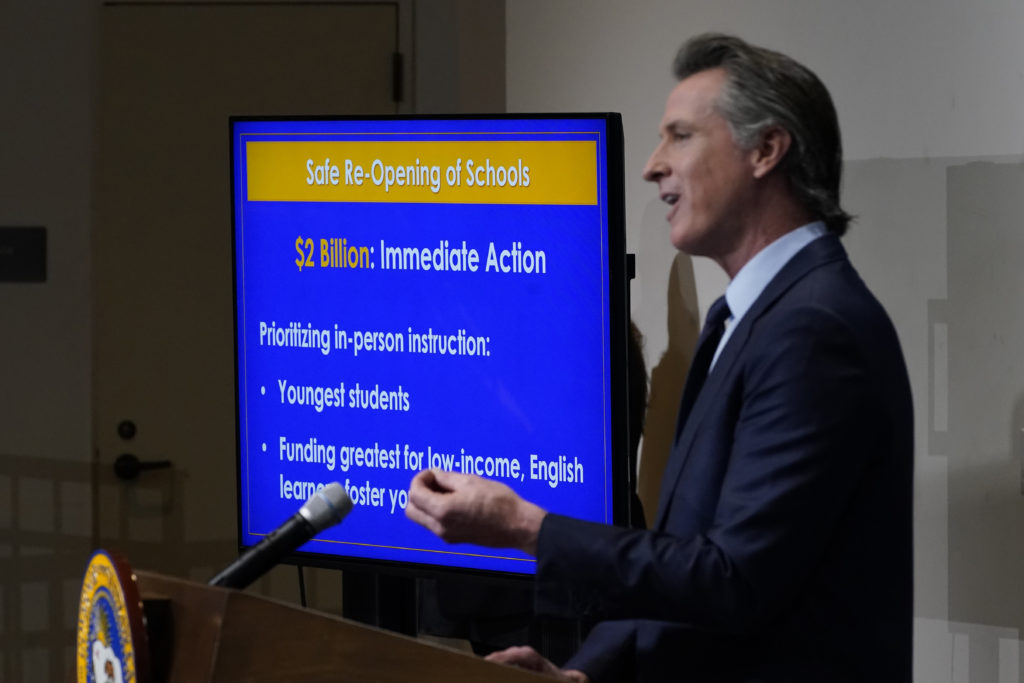 Governor’s proposed cost-of-living adjustment would be a lifeline, but experts warn that districts should not get too comfortable. 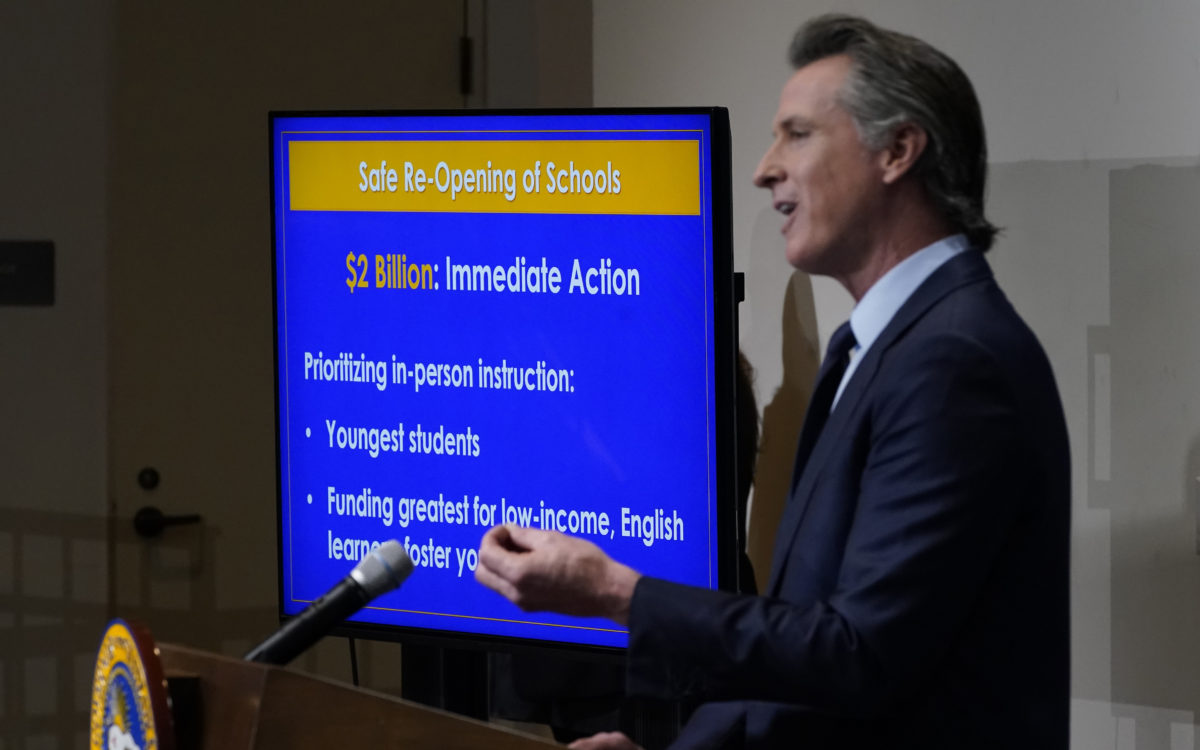 Gov. Gavin Newsom’s proposed cost-of-living adjustment for school districts — part of his $89.2 billion 2021-2022 education budget pending before the Legislature — could turn the tide for some cash-strapped districts that were bracing for budget cuts.

In 2020, when California’s Department of Finance anticipated a major tax revenue shortfall due to the pandemic, county superintendents delivered stern warnings to school districts: plan for zero cost-of-living adjustments for the foreseeable future. That would have left school districts to grapple with the added costs of distance learning but with less revenue from the state.

But even as millions of Californians lost their jobs and small businesses shuttered, stock market prices surged — driving up capital gains tax income. This helped Newsom to put forth a $227.2 billion budget — the largest in state history. Among the $89.2 billion set aside for education is a 3.84% cost-of-living adjustment for K-12 schools.

The potential extra funding would allow some districts to reverse their plans for cuts to next school year’s budget. In some cases, districts would even recoup some of the funds they had to cut over the past few years. But that respite may be short-lived, said Michael Fine, CEO of Fiscal Crisis and Management Assistance Team (FCMAT), a school finance watchdog. His organization anticipates that declining enrollment and higher pension obligations could lead to a budget “danger zone” in 2022-23. That’s also when the Department of Finance expects the state to slide into a $7.5 billion deficit.

West Contra Costa Unified won’t have to trim its budget for the next two school years if the cost-of-living adjustment is approved. Officials previously anticipated having to cut up to $15 million from the 2022-23 budget. Associate Superintendent of Business Services Tony Wold, at a Jan. 27 school board meeting, said the cost-of-living funds would essentially push the district’s projected deficit off until 2023-24. Moreover, it approximately cuts the deficit in half from around $18 million to around $9 million.

“It is a much better situation than it was in December. However, we do need to be very cautious,” Wold said. “The governor’s proposal is just that; it’s not law, and it’s not done until May.”

The extra funding would come at a pivotal time for West Contra Costa Unified. Prior to the pandemic, the 30,000-student district in the Richmond area had cut $30 million from its 2020-21 budget in order to address a debilitating $48 million projected shortfall. Those cuts resulted in eliminated positions and larger class sizes, among other impacts. In addition to the cuts, the district borrowed more than $14 million from its post-employment benefits trust, used for health and life insurance. It also drained its special reserve fund by more than $19 million to slightly more than the state-required limit for a district of its size, which is about 3% of annual expenditures.

The governor’s proposed cost-of-living increase isn’t the only extra funding districts are anticipating over the next year. Newsom also proposed $4.6 billion for summer school and extra learning time to confront the academic setbacks most students have faced during the Covid-19 pandemic, particularly low-income students and those with limited internet access. West Contra Costa Unified stands to receive about $20.4 million of that.

Newsom also seeks to have the state pay two-thirds of the $12.5 billion it owes school districts in late payments or “deferrals.” In order to make up for a shortfall in the last budget cycle, the legislature opted to defer payments to schools, essentially writing an “IOU” with the promise to make it up later when the state recuperated some revenue. This forced districts to borrow funds or dip into their special reserves in order to pay their bills and make payroll. The Legislature opted to do this instead of making cuts in funding for K-12 and community colleges in the 2020-21 budget.

West Contra Costa Unified will also receive about $24.1 million as a one-time grant from the federal Elementary and Secondary School Emergency Relief program under the CARES Act. The district is allowed to use that money to purchase technology for students, for mental health services and support, repairs and improvements to school facilities to reduce the risk of virus transmission, and to fix up or replace systems to improve the indoor air quality in school facilities.

With the expectation of a brighter financial picture, the district’s school board at the Jan. 27 meeting directed administrators to restore both the post-employment benefits trust and the special reserve fund to about what they were before this year. That would bring the district’s reserve fund to about 9% of its annual expenditures, which school board member Demetrio Gonzalez-Hoy said is “pretty normal” for a large urban district.

“It’s actually high compared to other urban districts like L.A., Oakland, San Francisco and San Diego, so I’m glad to see that we’re growing [the reserves] a little because we had to use them over the past couple of years,” Gonzalez-Hoy said at the January meeting.

Wold, however, pointed out that a 9% reserve would only cover about a month’s worth of payroll.

“Reserves are a really delicate balance; we clearly do not have enough,” said school board member Leslie Reckler. “We are just so thinly funded in our education that it’s always going to be a balancing act between what we can put away and what we can afford.”

The board also directed administrators to “park” or earmark about $24 million in the district’s general fund to soften the blow of the expected deficit in the 2023-24 school year; that money the district could end up using for other things pending board approval.

Fresno Unified would also be able to put off making cuts to next year’s budget under the governor’s proposal, said interim Chief Financial Officer Santino Danisi.

“We’re in a pretty healthy position and could have navigated it had we needed to,” Danisi said. “It would have made it more difficult to navigate some of the effects of the pandemic on our students and would have been painful in that sense to address students’ needs when we get back to campus.”

The estimated savings in 2022-23 could change, though, Wallace said, since California districts will no longer be held harmless for attendance loss. The state currently funds districts based on their attendance rates prior to the pandemic, but that practice will end in 2022-23, forcing districts to adapt.

San Francisco Unified, among other districts, has experienced an enrollment decline in recent years.

“The good news that we’re seeing for ‘21-22 is short-term, and we should anticipate the need to be careful for the following fiscal year,” Wallace said.

Fine of FCMAT identified the enrollment loss as one of three problems expected to come together in 2022-23.

Another problem is slower year-over-year growth to the Proposition 98 formula, Fine said, which determines the minimum funding levels for K-12 and community colleges. Finally, districts will also have to resume paying their full share of pension payments to CalSTRS and CalPERS. For the past two budget cycles, the state stepped in and spent about $5.5 billion toward defraying districts’ short-and long-term pension obligations.

“These three factors will create a difficult 22-23,” Fine said.