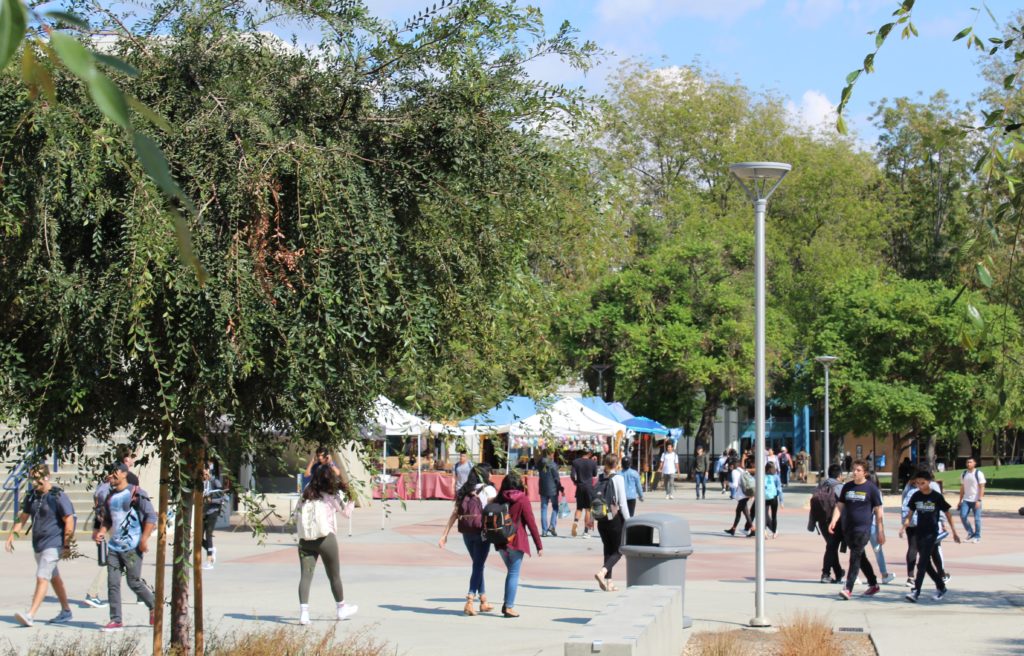 New funding would include extra financial aid for some students with children. 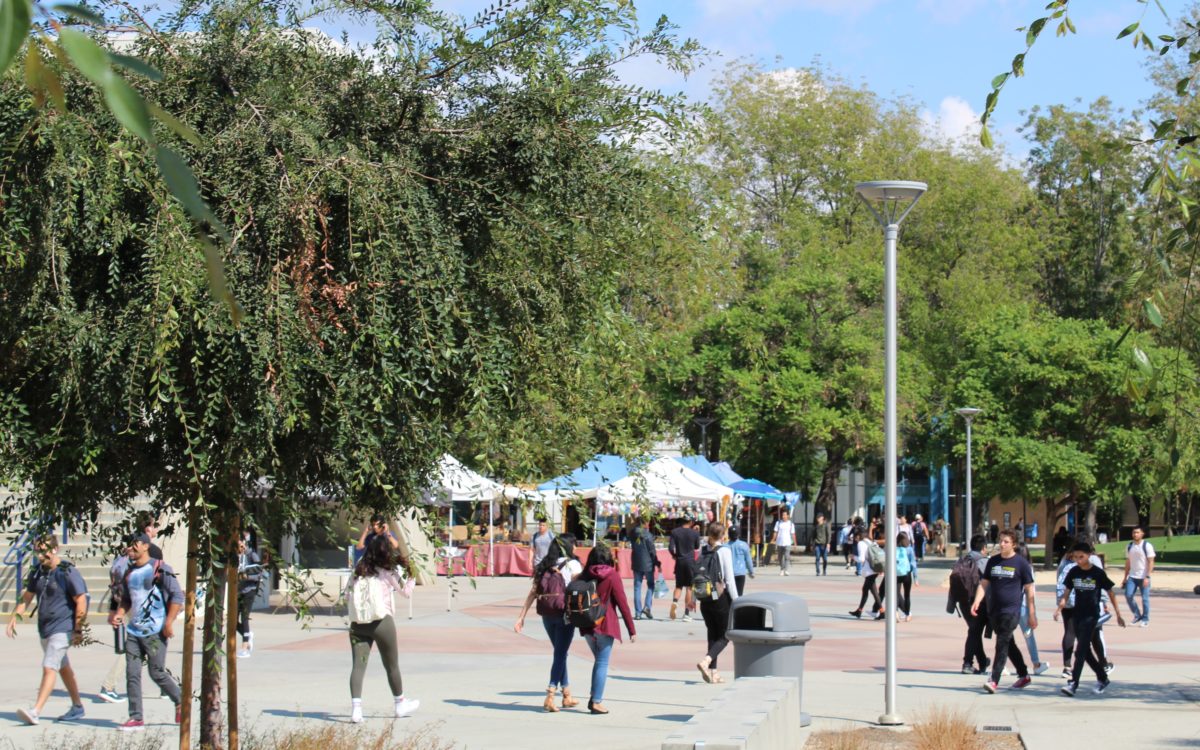 Larry Gordon/EdSource
Students on the CSU Fullerton campus in 2018

Larry Gordon/EdSource
Students on the CSU Fullerton campus in 2018

The budget also proposed substantial 2019-20 increases in funding for the ten-campus University of California and 23-campus California State University but stipulates that tuition levels stay frozen. The new governor put special emphasis on expanding mental health services for students and getting Californians with some college credits to finish their degrees.

“This marks the single largest proposed investment by any governor in the history of the university and we are extremely appreciative of Governor Newsom’s bold investment in us,” CSU Chancellor Timothy P. White said in a statement.

UC regents board chairman George Kieffer and UC system president Janet Napolitano said in a joint statement that they were heartened by Newsom’s “commitment to not only the university, but also the students and families across California who rely on adequate state investment in the outstanding education at UC.”

Newsom’s plan also would add $402 million in new funding for the state’s 115 community colleges — a significant increase, but short of the $736 million in extra funds requested by the system’s Board of Governors. Both figures include adjustments for inflation. Some of the additional money in Newsom’s budget would finance a proposed second year of free tuition for some community college students.

But with all that extra spending, Newsom’s plan still fell short of proposals to dramatically expand the Cal Grants, the state’s main financial aid program, to cover more of college students’ living costs. Support for the expansion came from the state’s community colleges, the California Student Aid Commission and student groups.

The California Student Aid Commission late last year proposed a sweeping and expensive plan to remove caps on the number of Cal Grants. The commission’s plan also called for expanding the grant sizes to cover student expenses beyond tuition, such as housing and food.

The budget would increase the amount the state spends on Cal Grants by nearly $200 million. Included in that would be new aid, worth as much as $6,000 a year, for an estimated 29,000 students across all sectors of public higher education who are parents of dependent children.

“I think they deserve a little relief, because they’re doing everything,” Newsom said of students who are parents. Later during his budget presentation, he said about the proposed new aid: “I’m really excited about this. It’s a significant cost, but I think it’s the right thing to do.”

The proposed budget also marginally expands the number of students who would receive the Cal Grant by roughly 4,000 students. But the need is greater. More than 200,000 eligible students don’t receive the grant due to caps on how many grants annually are awarded to students who start college more than a year after graduating from high school.

Lande Ajose, chair of the state Student Aid Commission, which administers Cal Grants praised the proposal for students with children. “By investing in additional grant aid for students with dependent children, Governor Newsom has proposed a path out of poverty for tens of thousands of our low-income students and families,” she said.

However, student associations representing the UC, CSU and community colleges issued a joint statement that said Newsom’s proposal “does not go nearly far enough in addressing the systemic issues related to all low-income college students’ ability to afford their education.”

Debbie Cochrane, executive vice president at The Institute for College Access and Success, an organization that has supported an expansion of the Cal Grant, agreed, but added that Newsom’s Cal Grant proposals “are important and targeted investments for some of the most vulnerable students in the state.”

Christian Osmeña, vice chancellor for finance and facilities at the state’s community college system said it will continue to advocate for a larger expansion of the Cal Grants.

A spokesman for Newsom’s Department of Finance defended the budget increases for Cal Grant. “This is the way that the governor chose to structure his proposed budget for student aid. …. It’s before the Legislature and there’s going to be additional dialogue,” said H.D. Palmer.

The new governor put special emphasis on expanding mental health services for students and getting Californians with some college credits to finish their degrees.

He proposed $300 million in extra ongoing funds for the CSU, an 8 percent raise above this year that would allow for an extra 7,000 students and cover other costs. Plus, the plan calls for an additional $262 million in one-time funds that would be mainly devoted to fixing up CSU campus buildings and building child care centers. For UC, he is seeking a $240 million hike in general funds, which is a 7 percent raise, and $138 million more for structural repairs and maintenance.

In his previous position as lieutenant governor, Newsom sat on the university systems’ governing boards and voted against tuition increases. His first budget as governor again stressed that all new funding comes “with the expectation that tuition will remain flat, access will be increased and time to degree will improve.”

In a victory for advocates of higher education expansion in the Central Valley region, he proposed $3 million to study the possibility of adding a new CSU campus, probably in Stockton. And he advocated that UC’s Extension centers, which now offer an array of certificate programs and other learning opportunities, be the bedrock of a new $15 million initiative to get Californians with some college credits but no degrees to return to school to earn degrees or certificates. Each of UC’s nine undergraduate campuses has Extension centers, mainly for older students who wish to take courses but who are not necessarily pursing a degree.

Newsom estimated that about 60,000 people started but did not receive their UC degree over the past two decades and that overall one million Californians could be helped by such a degree-completion push, including those who attended community colleges. “I want to go after those folks and get them those degrees,” Newsom said. Administration officials later said that some of that effort might involve online courses.

The budget process calls for Newsom’s office to provide more details by Feb. 1 in the form of a “trailer bill” that will be introduced in the Legislature. The budget will be scrutinized and debated by the Legislature and will surely undergo changes by the time the governor presents his revision in May. The Legislature must adopt a budget by June 15 that Newsom could sign or veto in whole or parts.

But enrollment growth may remain up for debate in coming months. The CSU had been seeking enough funding to grow its enrollment by 5 percent or about 18,000 while Newsom is proposing an extra 2 percent or 7,000. UC wants to expand its undergraduate enrollment by 2,500 but the governor offered money only to lock in funding for this year’s growth of 1,000 students.

Mental health services, housing and hunger received special attention in Newsom’s plan. In addition, across the three higher-education systems, more than $18 million would be allocated for legal aid and other services for undocumented immigrants.

Both UC and CSU would also receive $15 million to meet students’ food and housing needs.

Beyond expanding some Cal Grants, Newsom’s budget proposal calls for nearly doubling the funds — to $40 million — available for community colleges to offer a second year of free tuition to full-time students who otherwise aren’t eligible for tuition breaks meant for low-income students. An estimated 28,000 first-time, full-time students could benefit.

But colleges would not be limited to spending the $40 million on just tuition. Instead, colleges could use the money to cover student expenses like textbooks, school supplies and transportation.