Pension-cost relief will free up money for school districts next year. 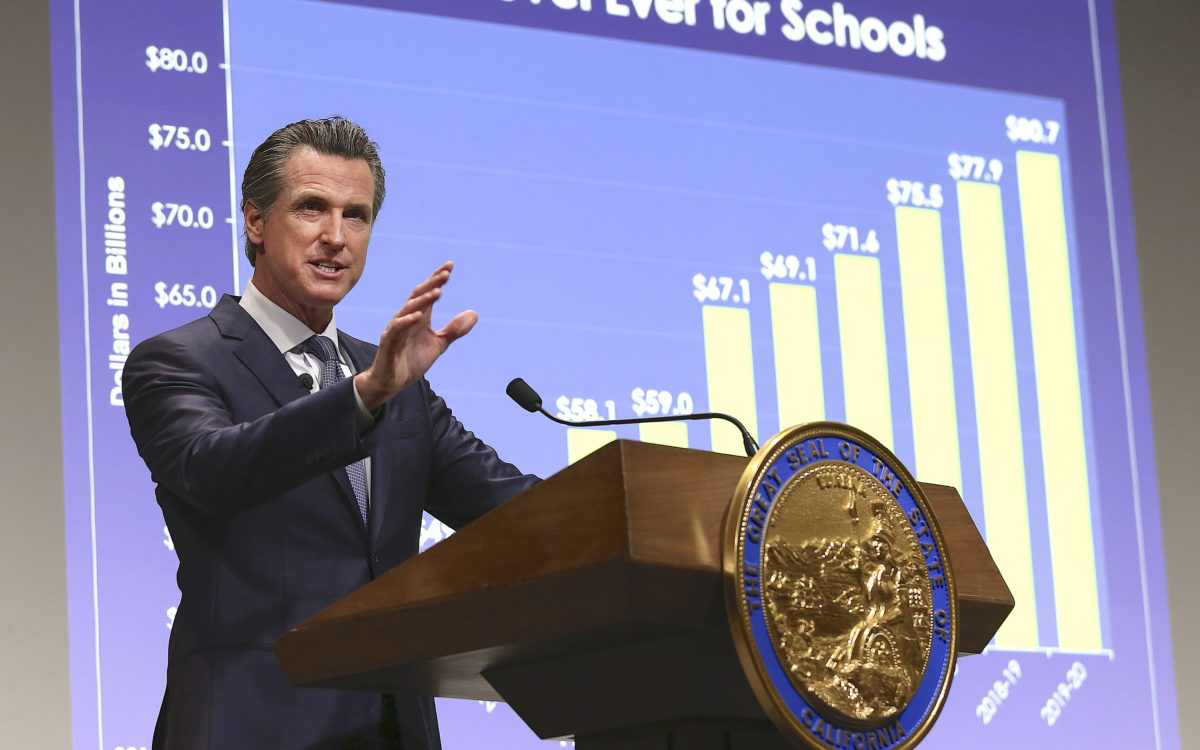 You can find the full budget by areas, here.

Using surplus money from the state’s General Fund, Newsom would wipe out $3 billion of districts’ rising obligations to CalSTRS, the pension fund for teachers and administrators, including $350 million each of the next two fiscal years. If the Legislature passes the budget as proposed, districts will be able to spend that money as they want. The remaining $2.3 billion would reduce districts’ liabilities beyond 2020-21.

The governor is also proposing $576 million more for special education — another fast-rising expense that has eaten into districts’ spending. And, with $10 million in one-time money, he would kick-start a project that Jerry Brown, his predecessor, had resisted: creation over time of a statewide database linking student information from early education programs through K-12 schools to post-secondary education and into the workforce.

Some education observers were thrilled. “The governor gets a straight A in understanding the real concerns of local districts and doing something about it,” said Kevin Gordon, president of Capitol Advisors Group, a prominent lobbying firm representing school districts and county offices of education.

“The budget exceeds our expectations,” said Edgar Zuzueta, senior director of governmental relations and policy for the Association of California School Administrators. “We applaud Newsom’s efforts on pension liabilities. This is a shift from the previous administration, which was hesitant to take on the issue of temporary relief.”

Los Angeles Unified, which faces a threat of a strike next week, gets about 10 percent of the state’s K-12 funding. Within hours of the release of the budget, L.A. Unified Superintendent Austin Beutner said that he would use the new revenue to present a new contract proposal to United Teachers Los Angeles, which is battling the district over large classes and pay.

“Our commitment to our students, families and educators is to invest this additional money in reducing class size and supporting classroom educators,” Beutner said in a statement.

Newsom showed an impressive command of the budget in a nearly two-hour presentation, filled with acronyms and program details, before an audience of state employees and news reporters. His 3-year budget is based on a forecast that the state’s 10-year economic expansion would continue — an assumption that, he acknowledged, might “send up shivers in some people’s spines.” But he said his revenue forecasts were more modest than in past years and he committed to add $6 billion to the state’s rainy day fund within three years while paying down billions of dollars in state liabilities.

Newsom had pledged while campaigning to make early education a priority. His budget includes about $1.8 billion for early learning and the well-being of children aged 0 to 5 — a historic amount.

The money will fund several projects, including:

Early childhood advocates applauded the governor for investing in a full range of programs to help children and families beginning at birth.

“I’ve been working in this field for 40 years now,” said Bruce Fuller, professor of education and public policy at UC Berkeley. “I’ve never seen a governor with this grasp of the evidence, the evidence being that if we can intervene early on in the lives of infants, toddlers and preschoolers, we can begin to narrow some of these terrible disparities that persist.”

Significantly missing from the governor’s proposal is increased funding for more subsidized child care spots or reimbursements for child care providers for children 3 and younger. Asked about that by a reporter, Gov. Newsom said “I’m not just for new slots, but for quality slots,” adding “If you have to build an addition to your home, it’s going to take time to build the addition to accommodate more members of your family.”

Funding for additional subsidized child care slots sometimes goes unused, because there are not enough buildings or providers to care for all the children who need it.

Newsom used a projected $21 billion surplus for new spending in early education and higher education without encroaching on Proposition 98, the formula that determines how much of state’s General Fund is mandated for K-12 and community colleges. Newsom is proposing a modest 3.7 percent increase for Prop. 98. State funding per student would rise by $435 to $12,003.

School groups had called for Newsom to break with past governors and raise Prop. 98 funding beyond the minimally mandated amount. Newsom didn’t, instead using pension relief to effectively do the same thing.

Gordon took that as “a sign that the governor does not believe Prop. 98 is the cap” on spending and should be raised.

The Local Control Funding Formula, Brown’s sweeping finance reform law that controls most school spending, will get most of the K-12 money: $2 billion, as a result of a statutory 3.4 percent cost-of-living adjustment. The increase in special education funding of $576 million will consume nearly all of the rest of Prop. 98. That will mark a departure from Brown’s approach, which was to give districts more one-time discretionary spending.

Patrick O’Donnell, who chairs the Assembly Education Committee, said that he was pleased special education received more money, but will negotiate to spend it differently. He wants to equalize the formula for special education funding, which, under the current outdated formula, produces disparities of hundreds of dollars per student among districts. Brown opposed the idea, pending other reforms in educating students with disabilities. O’Donnell, who sponsored a bill two years ago to revise the formula, said he might push for it again.

O’Donnell said he’d also want to see more money for career technical education, which was a one-time budget priority last year. Overall, he said, Newsom is proposing a “positive budget” that balances the importance of expanding early education and the need to reduce the state’s liabilities.

Carrie Hahnel, interim co-executive director of the nonprofit Education-Trust West, praised Newsom’s budget as “an equity-driven declaration of California’s values” for its attention to early education, commitment to the Local Control Funding Formula and college affordability.

Along with giving employers a break on pension costs, Newsom would use the surplus to pay down the state’s share of pension obligations with $2.9 billion over four years beyond this year’s scheduled payment to CalSTRS and $3 billion extra to CalPERS, the pension fund for state workers and hourly school employees. The Department of Finance says the down payments will reduce the state’s long-term obligations – $7.2 billion to CalPERS and $7.4 billion to CalSTRS – over the next three decades.