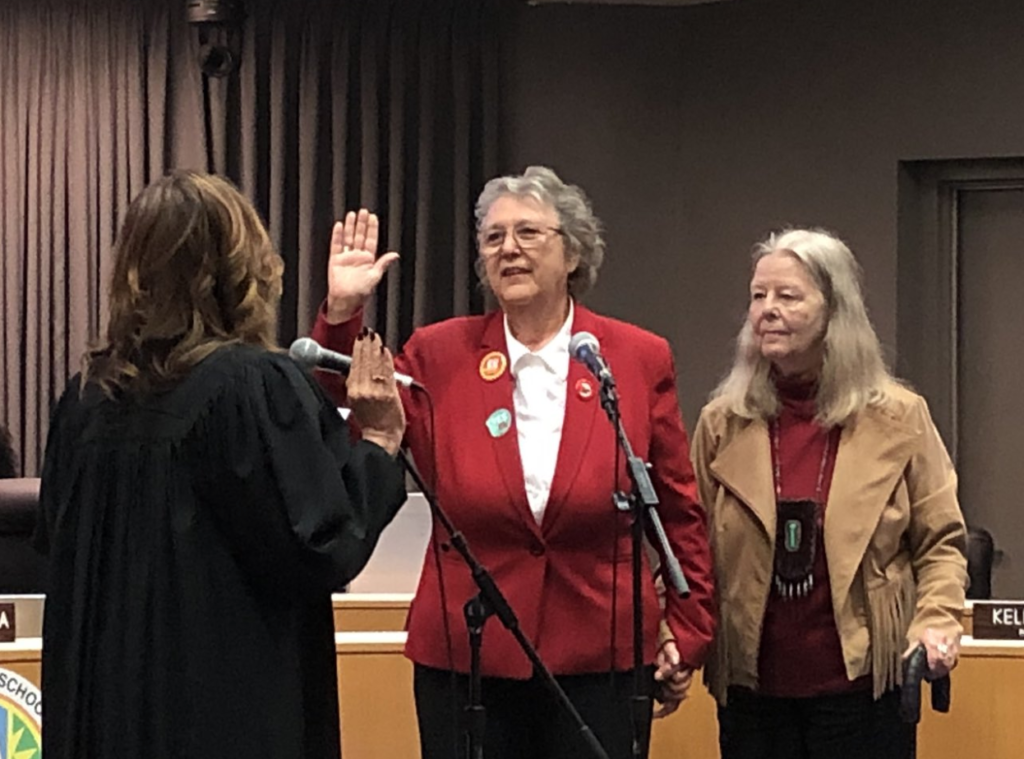 Goldberg had pledged during the campaign she would push for more funding for LA schools. 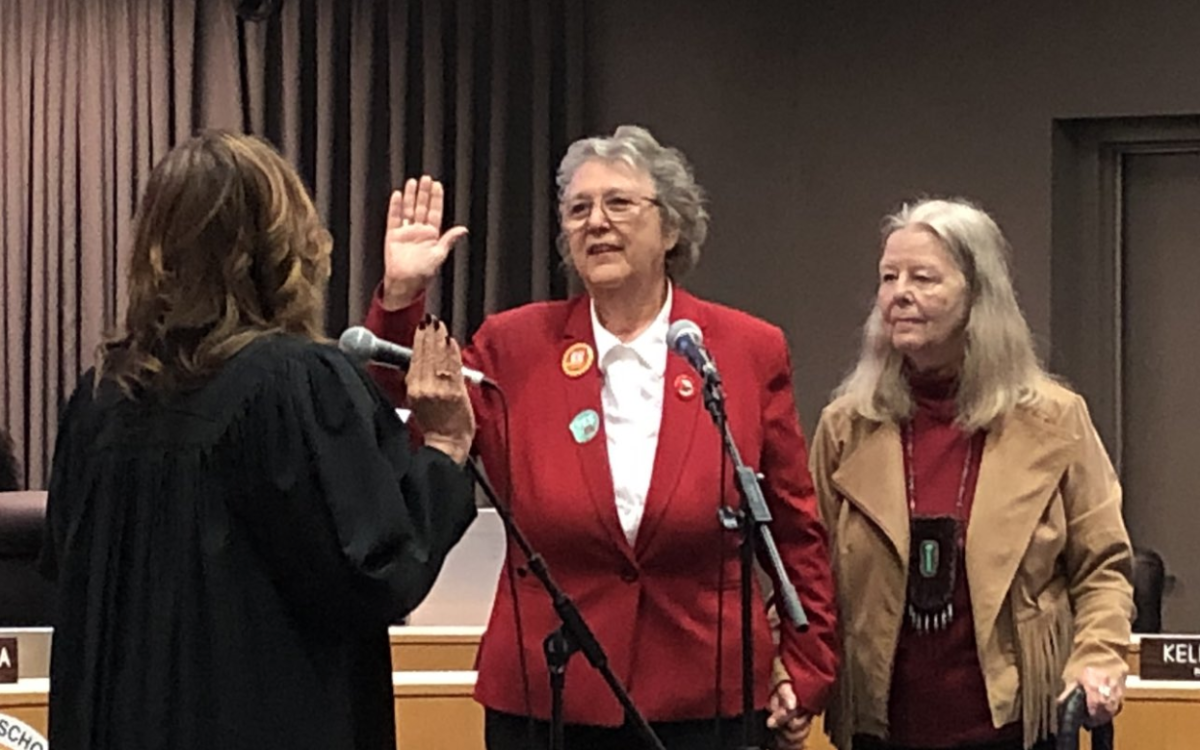 Credit: Michael Burke/EdSource
Jackie Goldberg, holding hands with wife Sharon Stricker, is sworn in as L.A. school board member on May 21, 2019 by retired Judge Teresa Sanchez-Gordon.

Credit: Michael Burke/EdSource
Jackie Goldberg, holding hands with wife Sharon Stricker, is sworn in as L.A. school board member on May 21, 2019 by retired Judge Teresa Sanchez-Gordon.

Newly elected Jackie Goldberg on Tuesday used her swearing-in ceremony to a seat on the Los Angeles Unified school board to urge support for Measure EE, a parcel tax that will be on the ballot on June 4.

The 16 cents per square foot tax, which needs a two-thirds majority to pass and is opposed by business groups, is projected to raise between $400 million and $500 million annually for LA schools.

Goldberg promoted the measure during brief remarks after she was sworn in to a board seat in front of a crowd of supporters inside the LAUSD board room on Tuesday afternoon.

In addition to pushing Measure EE, Goldberg on Tuesday also called for California to increase taxes on the state’s wealthy population.

Her comments came after she pledged on the campaign trail to push for California to spend more money per pupil if she were elected to the board. She is now carrying out a term that expires in December 2020. Goldberg, a veteran politician and community activist, won a special election runoff earlier this month, when she soundly defeated Heather Repenning, a longtime aide to Mayor Eric Garcetti.

Goldberg is filling the District 5 seat that was left open following last year’s resignation of Ref Rodriguez, the former board president who pleaded guilty to money laundering while campaigning for a seat on the LAUSD board.

Goldberg is returning to the board after previously having served on it from 1983 to 1991. That included a term as president. She also previously served on the Los Angeles City Council and in the California State Assembly.

During her campaign this year, Goldberg was supported by United Teachers Los Angeles (UTLA), the teachers’ union.

Her presence on the board may have lasting implications for the growth of charter schools in the district, the future of superintendent Austin Beutner and how the board addresses concerns over the district’s budget.

The union has been at odds with Beutner and, during their strike earlier this year, teachers called for a halt to the expansion of charter schools, arguing that they take money away from traditional schools.

Goldberg herself has criticized the growth of charter schools and vowed during her campaign to work with lawmakers in Sacramento to increase oversight of charter schools. She supports a temporary moratorium on opening new charters.

Goldberg also opposed Beutner’s appointment as superintendent, though she said recently that she plans to work with him.

Goldberg is also joining the board at a time where there are concerns over the district’s finances, with district leaders having warned that LAUSD could face insolvency within two or three years because of a budget deficit. But Goldberg has said that warnings of a crisis are overstated.