School districts in the most expensive regions of California, struggling to pay salaries that keep pace with the high cost of living, are increasingly turning to housing incentives to attract new teachers and stanch the flow of teachers from their schools.

Affordable housing projects for school employees have been built in Los Angeles, Santa Clara and San Mateo over the last 20 years. Now, with housing costs continuing to rise and new state laws that make building employee housing easier, a wave of new projects is in the pipeline.

Santa Clara County, San Jose Unified, Jefferson Union High School District, the Sonoma County Office of Education, San Francisco Unified, San Lorenzo Valley Unified, West Contra Costa Unified and Mountain View Whisman School District are among those that have approved employee housing or are considering it. All of those districts are in the Bay Area, where the rent for a modest one-bedroom apartment in the region stretching from Marin to Santa Clara County is more than double the median one-bedroom rent statewide, according to an EdSource analysis.

This special report reveals just how crushing California’s housing crisis has become for many teachers. Read how teachers are getting shut out of affordable housing especially in high-cost parts of California while many others struggle to pay the rent. See what teachers can afford to rent in your school district on our interactive app or view statewide maps showing where teachers can afford to live. Check out teacher salaries in districts across the state and read more on EdSource’s analysis and how it was done.

The analysis found the Bay Area has the largest disparity between teacher salaries and rental housing costs in the state. In 47 school districts in the region, the highest-paid teachers only earn enough to rent an affordable one-bedroom apartment, using the federal definition of affordable housing as 30 percent or less of household income.

The movement to provide affordable housing for teachers and other school employees is spreading throughout the Bay Area and into other regions of the state where the housing supply is limited or too expensive for teachers.

“This is a statewide problem,” said Dale Scott of Dale Scott and Company, a financial advisory firm that has worked with school districts to fund affordable housing. “The problem of affordability is obvious in the Bay Area and other parts of the coastal area. In the Central Valley it is often supply. There simply aren’t enough rental units for teachers and staff.”

Despite efforts to provide more affordable housing for teachers, it’s not clear that it helps keep them.

“Unfortunately, there is no research we have come across that is on point, that has specifically looked at whether housing incentives have an impact on teacher retention,” said Anne Podolsky, of the Learning Policy Institute, a research and policy organization based in Palo Alto.

Despite the lack of research, the availability of affordable housing is considered an important factor in retaining teachers. The Learning Policy Institute’s research on teacher retention includes recommendations that school districts and the state consider housing incentives, such as rent, relocation and down payment assistance, as well as discounted homes and subsidized teacher housing.

“We know that compensation could influence a teacher’s decision to be in and remain in the profession,” Podolsky said. “Think of housing as another kind of compensation.”

Dale Scott and Company advised Jefferson Union High School District officials in Daly City when they put a $33 million general obligation bond on the ballot last June to help build affordable apartments for teachers and staff. Scott said he doesn’t know of another school district that has passed a general obligation bond purely to finance an employee housing project.

The Serramonte del Rey Faculty and Staff Housing Project, built on the site of a former school, is expected to cost $50 million to $60 million, according to the district. It will break ground on the 116-unit project this summer.

Officials from more than 20 school districts in rural and urban areas have contacted Dale Scott and Company with an interest in funding staff housing through a general obligation bond, Scott said. “I think there will be a fair number on the 2020 ballot,” he said.

General obligation bonds are issued by school districts and community colleges to finance the construction of facilities.GO Bonds require approval by a majority of 55 percent or two-thirds of voters, depending on the nature of the bond.

The Santa Clara Unified School District was one of the first districts to build affordable housing specifically for teachers, opening the first phase of Casa del Maestro in Santa Clara in 2002. The second phase was completed in 2009.

The catch: Teachers can stay there only for a maximum of seven years.

The apartment complex was built on the corner of an unused elementary school site. Rents for the 72 apartments are about 80 percent of market rent, between $1,430 for a 722-square-foot one-bedroom unit to $2,195 for a 1,170-square-foot two-bedroom, two-bath unit, said Eric Dill, the school district’s chief business official.

Currently, the complex is fully occupied and has a waiting list.

Rizi Manzon is one of the lucky few who got a spot in the complex. He drives six minutes from his one-bedroom apartment in Casa del Maestro to his job as chef instructor of the Culinary Arts Hospitality and Management Program at Adrian Wilcox High School in Santa Clara.

Manzon, 39, was a chef and restaurant manager in Orange County when his former teacher at Wilcox High asked him to return to the school to run the program. That was five years ago. Since then he has expanded the career technical education program to include 120 students working their way through three levels of classes, including an on-campus restaurant.

“It’s very rewarding in a different way,” he said. “As a chef, when you are looking for those accolades, it’s for you. Slightly narcissistic I think. It’s a totally different feeling. It’s about the kids being successful and realizing their potential.”

Without the apartment, which costs $1,460 a month, Manzon said he wouldn’t be able to live in Santa Clara. A comparable unit would be about $3,500, he said. The rent consumes about 25 percent of his $76,000 annual salary.

Many California teachers have already departed to less-expensive states, exacerbating California’s teacher shortage. An EdSource analysis of Census Bureau data found that about 40,000 teachers left the state between 2013 and 2017, although it is not clear if they left because of housing costs. That was an increase of 22 percent over the previous five-year period.

“We are committed to exploring every possible way to attract and retain teachers,” said Daniel Menezes, chief of human resources for the San Francisco Unified School District. “Building educator housing puts San Francisco at the forefront of working to address both the nationwide teacher shortage and the enormous cost of living here.”

Residents of the Francis Scott Key Annex must earn between 40 percent and 120 percent of the median income in the area, or $37,000 to $150,000. The average teacher salary in San Francisco Unified is $82,000, said Laura Dudnick, district spokeswoman.

The project will be funded with a $25.1 million subsidy from the city, a $29.5 million loan and a $23.7 million low-income housing tax credit. The school district is providing the property on a no-cost long-term lease. 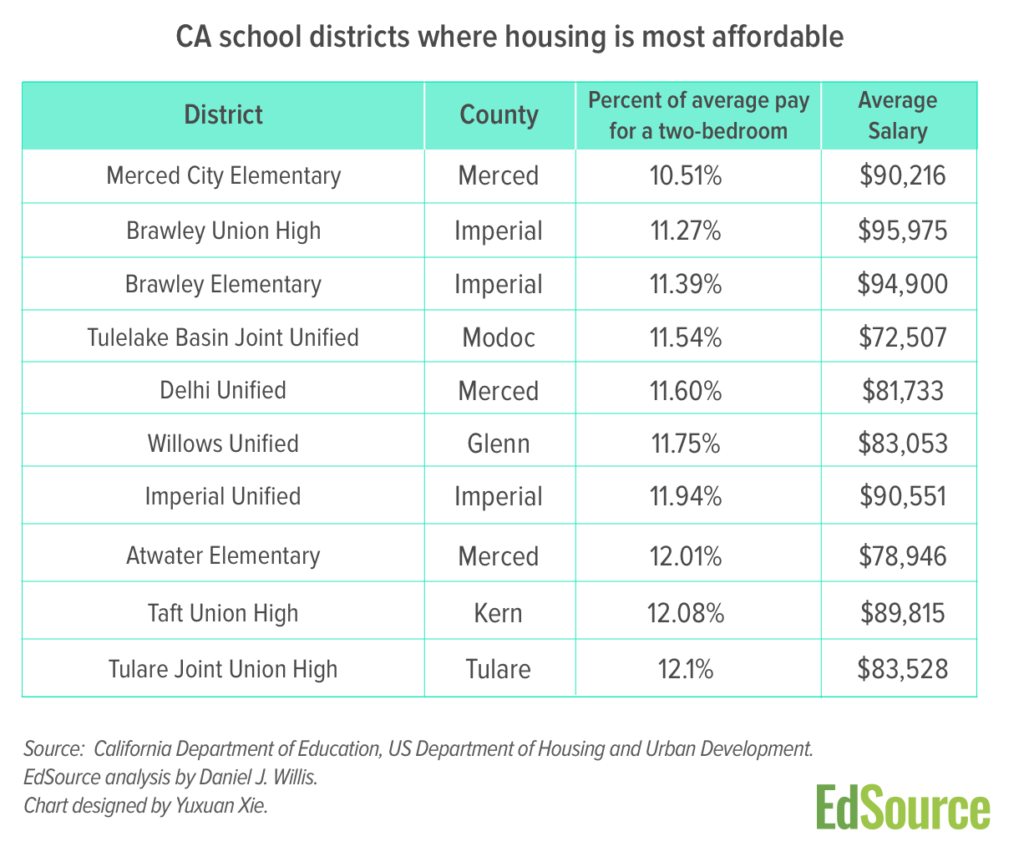 Los Angeles Unified has built three below-market apartment complexes for the district’s workforce in the last 10 years, but not without controversy. The complexes that were initially intended for teachers don’t house any.

Because the complexes were built using federal tax credits, all tenants had to meet federal income guidelines for affordable housing. Even its lowest-paid teachers earned too much to be eligible for the units, said Krisztina Tokes, deputy chief facilities executive for Los Angeles Unified.

Unable to house teachers, the Sage Park Apartments in Gardena and the Norwood Learning Village in Los Angeles now are home to bus drivers, cafeteria workers and teacher assistants, among others who work in the district. District workers occupy half of the Selma Community Housing complex in Hollywood. There are a combined 185 apartments in the three complexes.

District staff, who usually are paid less than teachers, also need affordable housing, and the district is currently studying strategies to further ease the housing crunch for employees, including building more below-market apartments for workers.

Santa Clara Unified was able to avoid the problems of Los Angeles by financing Casa del Maestro with the sale of certificates of participation, which generally enables the holder to share in the revenue of a project, in this case the rent.

“Because of that, our teachers do not need to qualify as low-income to live in our teacher housing … they just need to be our teachers,” Dill said.

Building affordable housing specifically for teachers and school employees is a little easier for districts now because of legislation passed in 2016 and 2017.

The Teacher Housing Act of 2016 allows school districts to provide affordable housing specifically for district employees and their families. The previous law required that homes or apartments be open to anyone who meets the low-income requirement if they used state and federal low-income housing funds or tax credits. 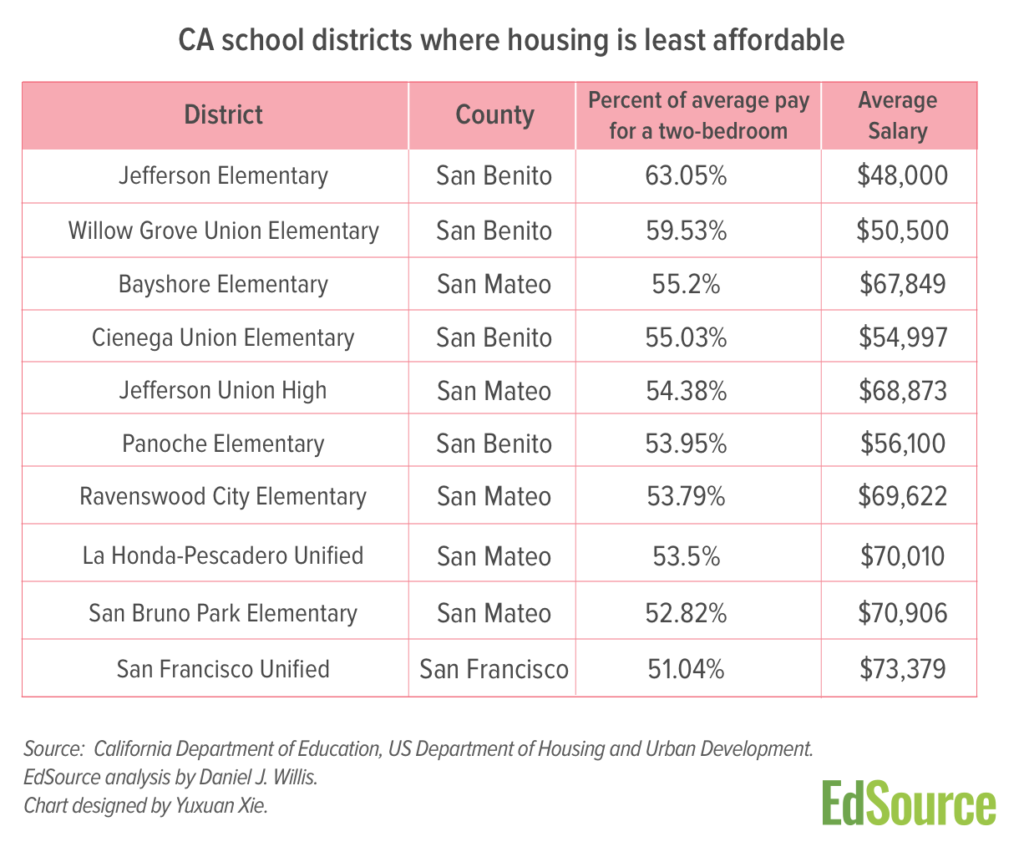 Assembly Bill 1157, approved by Gov. Jerry Brown in 2017, exempts school districts from some of the usual requirements related to the sale or lease of property if it will be used for employee housing. Districts no longer have to convene an advisory committee when they want to sell, lease or rent surplus property. The bill also exempts the district from property tax on the complex.

The idea has drawn opposition from residents of the Almaden Valley neighborhood. A petition on change.org to Save Leland and Bret Harte — two of the schools on the district list — has more than 6,600 signatures. Greg Braley, who started the petition, has said the projects will hurt the neighborhood’s property values and require students to travel farther to school.

Smith said the district loses 1 of every 7 teachers each year. Teachers who stay in the district often commute long distances to homes in less expensive areas.

“We are living in one of the most expensive areas in the U.S. It’s not just for the teachers, it’s for the staff as well,” Smith said. “We are looking for ways to help our staff live in the place they work.”

This story has been changed to clarify that general obligation bonds generally require a 55 percent majority vote to pass.