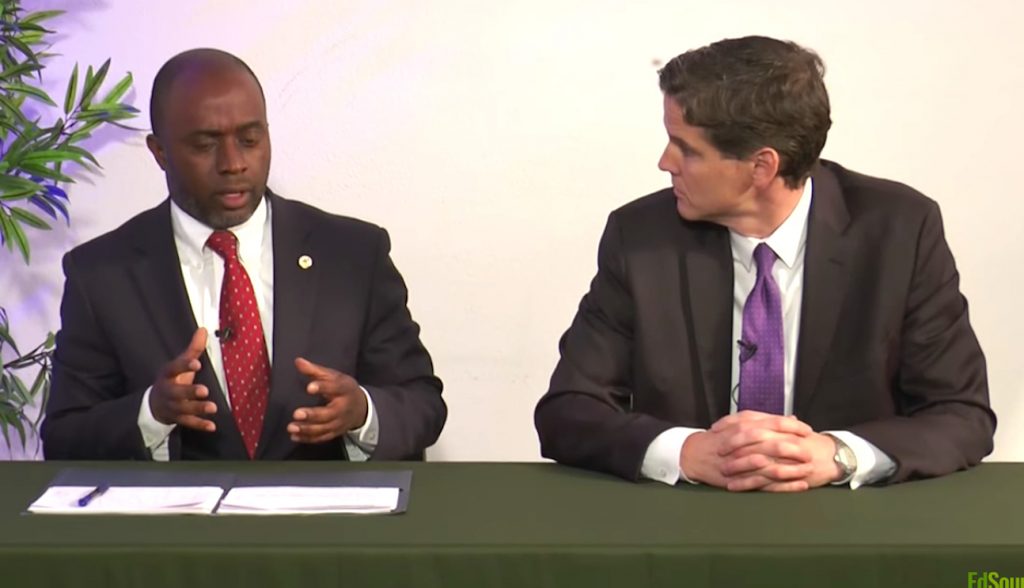 State superintendent doesn't have much say over charter schools 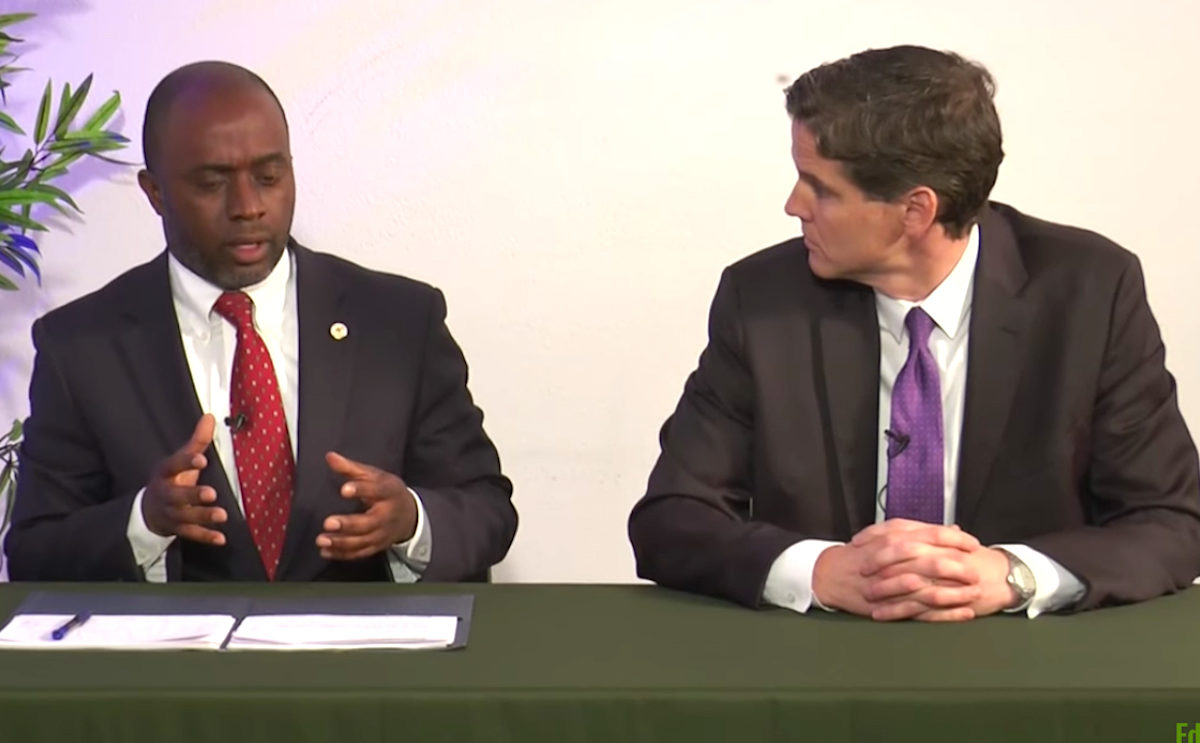 Candidates Tony Thurmond, left, and Marshall Tuck question each other during a forum webcast by EdSource in May 2018.

Candidates Tony Thurmond, left, and Marshall Tuck question each other during a forum webcast by EdSource in May 2018.

Given the head-spinning spending in the race for state superintendent of public instruction, you’d think there’s about a dime’s worth of agreement and $50 million of disagreement between Marshall Tuck and Assemblyman Tony Thurmond. Instead, in temperament and basic outlook, the two candidates are strikingly similar. And both are Democrats, although the election is non-partisan.

“Neither Tuck nor Thurmond is the caricature that their opponents make them out to be,” said Dan Schnur, longtime political observer and adjunct faculty members of the USC Annenberg School.

More about the campaigns and the candidates

What does the state superintendent do?

Truth and fiction behind the ads

Put them together in the same room, as EdSource did in May before the primary election, and then again separately last month in re-interviews for two podcasts (Oct.13 and Oct. 27), and you’ll find basic agreement on important issues. Both say they favor the big reforms set in place during the last eight years under Gov. Jerry Brown: the movement to district control, a new K-12 funding system and new academic standards.

Both Tuck, who has run both charter and a set of district schools in Los Angeles, and Thurmond, a social worker and social service administrator completing his second term in the Assembly, say they favor substantially more funding for K-12 and universal preschool. (See the updated EdSource guide on where they stand on issues that is part of this story.) Both favor giving districts the option of offering the SAT or ACT instead of the Smarter Balanced tests to 11th-graders, contrary to current State Superintendent of Public Instruction Tom Torlakson’s position.

Where they stand on the issues:

And regardless of their positions on issues, Tuck and Thurmond will have minimal authority to effect policies. The governor, Legislature and State Board of Education make education policy; the state superintendent, as manager of the California Department of Education, implements it.

Yet the state superintendent does have the power of persuasion and a high-profile position to shape debate. As a result, big-money backers — the California Teachers Association and public employee unions for Thurmond and wealthy supporters of charter schools for Tuck — have magnified the subtle and large differences Tuck and Thurmond have, not just on charter schools but other issues. They’ve also vilified the opposing candidate in a sea of TV ads and campaign mailers. Total spending in the race, between money raised by the two candidates and by independent expenditure committees, exceeds $50 million. Tuck and outside groups supporting him have more than a 2-to-1 funding advantage.

Uncertainty about the post-Brown education era adds to the tension. With his clear vision, political skills and veto power, Brown tamped down moves to restrict charter schools and tighten the Local Control Funding Formula, two issues he cared about. As the founder of two charter schools in Oakland, Brown was charter schools’ protector. He vetoed changes to the state charter school law and bills interfering with their autonomy. He has repeatedly warned legislators since its passage in 2013 that it would be premature to amend the funding formula, the landmark school financing law he championed that allocates more money to educate low-income children, foster children and English learners. With his departure, legislators and education groups will press their case for change.

Thurmond said he favors a “pause” in the approval of new charter schools while the state determines the “tipping point” of the negative impact on traditional schools from the loss of students and revenue they’d otherwise bring to districts. Thurmond represents Oakland, where the Oakland Unified School District is facing huge budget cuts and where 1 in 4 students attend a charter school.

The state’s 25-year-old charter school law precludes considering the financial impact on a district as a factor for an approval or renewal of a charter school. Senate Bill 1362, authored this year by Sen. Jim Beall, D-San Jose, would have permitted it but it died for lack of agreement on how to measure the adverse impact. But with the CTA’s strong support, it will return next year, along with other potential restrictions that Tuck’s donors see as a threat to future and current charter schools. A state superintendent who would promote those restrictions would add to their worry.

Tuck, who was the first president of Green Dot Public Schools, a Los Angeles-based charter school network, opposes a moratorium or pause on charter school approvals. And in his subsequent job as the founding CEO of Partnership for Los Angeles Schools, a nonprofit charged with improving some of Los Angeles Unified’s lowest-performing schools, he tangled with United Teachers Los Angeles. Tuck joined a lawsuit challenging the layoff-by-seniority policy that the union negotiated. He disagrees with teachers’ unions on how to revise the state’s teacher evaluation law and favors adding a year to the state’s two-year probationary period for new teachers.

At odds over funding

Tuck’s position on funding for low-income schools is troubling to the CTA. Tuck said his first act as state superintendent would be to rescind Torlakson’s 2015 guidance to school districts, which has allowed money under the Local Control Funding Formula targeted for high-needs students to be used for across-the-board raises for teachers. The CTA’s position is that the funding formula’s “supplemental” and “concentration” dollars can be used for that purpose. Tuck said these dollars instead should be used as incentives to attract talented teachers and principals only to low-performing, high-needs schools — whether with higher pay or extra resources.

Tuck’s vow to rewrite the guidance letter was one factor that led the Association of California School Administrators to endorse him. Torlakson’s directive “made things challenging” for district leaders and “seemed inconsistent with the intent of the law and with stakeholder engagement,” said Edgar Zazueta, senior director of policy and government relations for the association. District administrators would welcome guidance that is “less ambiguous,” he said.

Four years ago, the association made no endorsement in the Tuck-Torlakson race. Its recommendation for Tuck this time was controversial because members also want more restrictions on charter school growth, and the association has had “a good relationship” with Thurmond, Zazueta said. But the 28-member board of directors, representing regions of the state, decided that the state superintendent realistically has little to do with charter regulations or approvals. More importantly, he said, board members liked Tuck’s vision for transforming the Department of Education as a source of support for districts.

Administrators and teachers unions agree 80 to 90 percent of the time, Zazueta said, but in areas that they don’t, like their disagreement over a third probationary year for new teachers, the association “wants an equal seat at the table” on negotiations, and Tuck, leaders felt, is committed to providing it.

Thurmond has the solid support of the state’s unionized teachers. Tuck has the charter schools behind him. The challenge for voters is to choose the candidate they like based on issues where the state superintendent can make a difference.