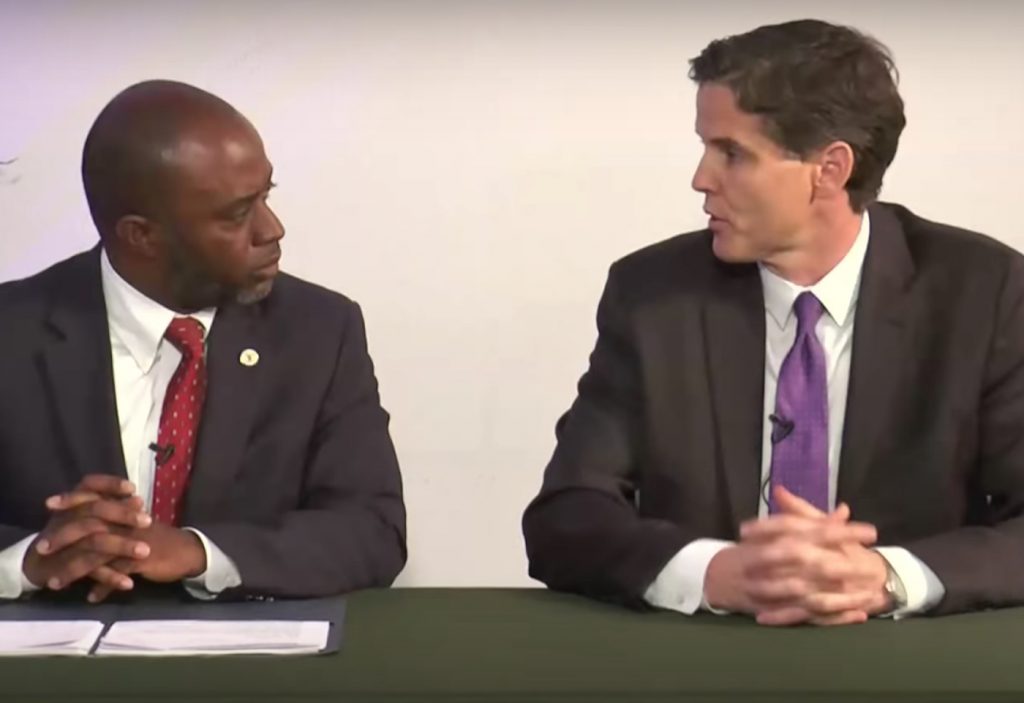 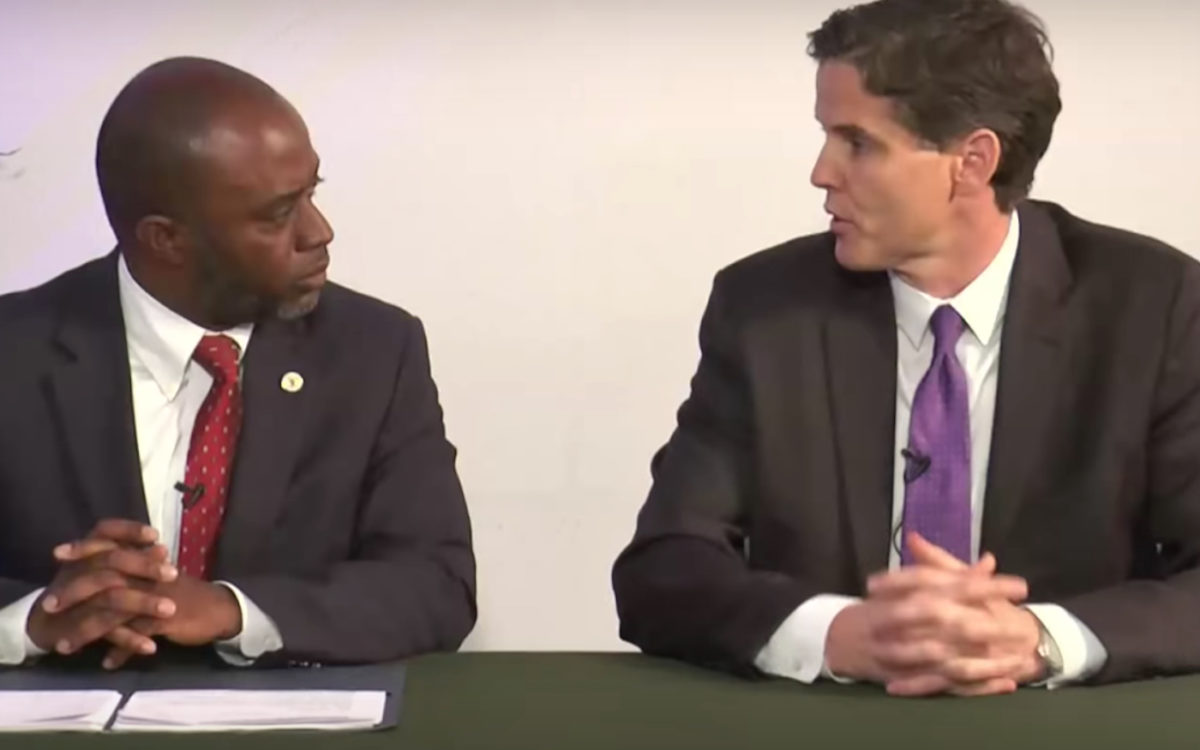 Heading down the stretch in a record $50 million campaign for state superintendent of public instruction, Marshall Tuck has a more than 2-to-1 money advantage over his opponent, Assemblyman Tony Thurmond, in combined direct contributions and funding by independent groups supporting the candidates.

Tuck raised $917,000 in direct contributions between Sept. 22 and the latest closing deadline on Oct. 20 for the candidates, bringing his total campaign contributions to $5.2 million. The $338,000 Thurmond brought in raised his total to $3.2 million. The latest report to the California secretary of state is the final one candidates will file until after the Nov. 6 election.

Since late September, funding by outside groups has swamped what candidates raised themselves, turning the election into a proxy war between public employee unions backing Thurmond and wealthy individuals, many of them charter school advocates and funders, backing Tuck. 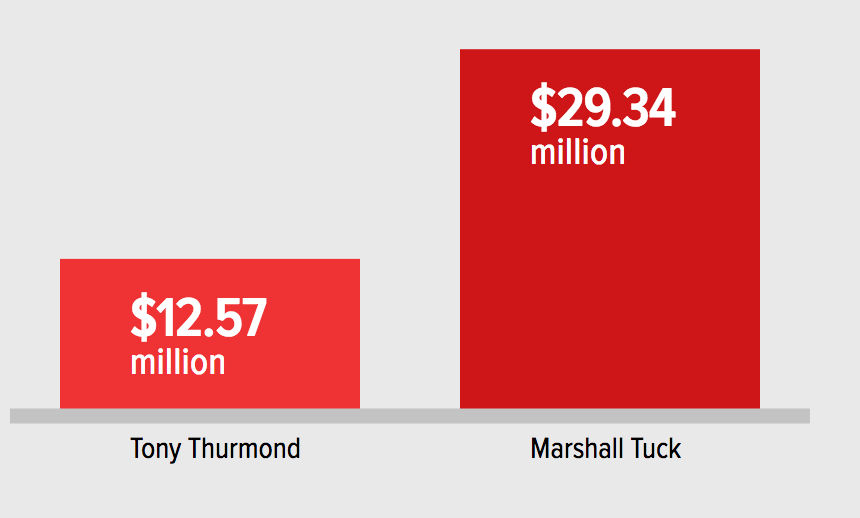 Independent expenditure committees backing Tuck brought in $15 million in the past 5 weeks, bringing the campaign total to $28.8 million, based on figures reported by the campaign.

Independent expenditure committees for Thurmond have brought $12.6 million, according to figures reported by the campaign. The union committee giving to the campaign is Educators Supporting Tony Thurmond for Superintendent Of Public Instruction 2018, Sponsored by Teachers and School Employee Organizations. Its largest contributor, donating $8 million, is the California Teachers Association, followed by the National Association of Teachers and the California Federation of Teachers.

The combination of funding by and for the candidates brings the total raised in the campaign to $49.8 million, the most expensive ever for the office, with $34 million for Tuck and $15.7 million for Thurmond, based on reported figures. It will top what had been the record: the $30 million that Torlakson and Tuck, in his first run for office, spent four years ago.

In addition to this amount, $5.5 million was spent independently  for ads and campaign mailers for Thurmond and Tuck by individuals and organizations not contributing money to a formal independent expenditure committee. About two-thirds of this spending, mainly by the California Democratic Party and the union representing prison guards was on behalf of Thurmond. Bloomfield, the biggest donor to the EdVoice for Kids PAC, personally spent an additional $1.2 million for Tuck.

Candidates’ campaigns are by law separate from independent expenditure committees and are barred from coordinating with them. There are no restrictions on how much donors can give to independent committees. Individuals can give a maximum of $14,600 in direct contributions to a candidate per election cycle, including the primary campaign.

Both Tuck and Thurmond are Democrats running for a nonpartisan position whose main responsibility, outside of having a big megaphone on education issues, is to run the California Department of Education. But the department itself has no policy-making power and limited power, in the era of local control, over local school districts or charter schools. The state superintendent earns a $175,182 annual salary. They are running to replace Tom Torlakson, who is termed out after two terms in office.

Thurmond is a former social worker, school board member and council member in Richmond. He is ending his second term in the Assembly, where he serves on the Education and Human Services committees.

Tuck is the former president of Green Dot Public Schools, a charter school organization based in Los Angeles, and CEO of the Partnership for Los Angeles Schools, a district-city initiative that runs 18 district schools. Most recently he’s worked for a nonprofit to develop effective teachers and principals.

Tuck, who has refused to accept donations from companies and organizations, has received more than twice as many contributions from small and large individual donors as Thurmond: 2,701 to 1,242. Included are the 1,848 individuals for Tuck and the 761 individuals for Thurmond who gave donations of less than $1,000 each. 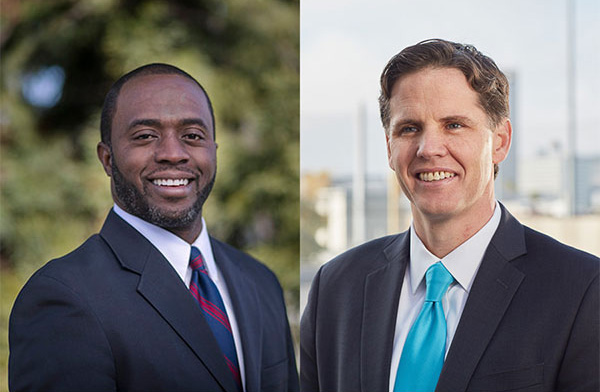 Independent committees have poured money into TV advertising, although here too the $6.5 million in ads favoring Thurmond are dwarfed by the $12.5 million for Tuck in the primary and general elections. TV ads funded directly by the campaigns are closer: $1.8 million by Thurmond, $2.5 million by Tuck.

The $4 million that independent committees for Tuck have spent on mailers is more than 10 times what Thurmond allies have spent, but they have to. The state Democratic Party has endorsed Thurmond and included his name on campaign mailings.

U.S. Sen. Kamala Harris, the first-term U.S. Senator and former state attorney general, sent an email to her supporters Thursday praising Thurmond and encouraging donations to his campaign. The message echoed the one Harris delivered in a television ad supporting Thurmond earlier this year.

San Francisco Mayor London Breed also weighed in with support for Thurmond on Thursday, as the two stood side by side at a press conference. Breed joined other Thurmond supporters — including Assembly members Phil Ting and David Chiu, who both represent the San Francisco area — in condemning a negative ad targeting Thurmond from an independent expenditure committee for Tuck. The ad blames Thurmond for the fiscal problems and low student achievement in West Contra Costa Unified during Thurmond’s one term on the board.

Thurmond and Breed said Tuck set the tone for the mudslinging and called on Tuck to disavow the independent committee’s ad. While saying he doesn’t control the content of the ad, Tuck told EdSource it accurately described problems during Thurmond’s time in office and “the board should be held accountable for that.”

Tuck has accused Thurmond of similarly distorting his record in a commercial produced by Thurmond’s campaign.

Kevin Gordon, president of the school consulting firm Capitol Advisors, said Tuck’s spending advantage is “daunting but not unexpected.” Tuck has attributed his close loss in 2014 to running out of money near the election and said he learned a hard lesson not to be in that position again, Gordon said.

Thurmond has the Democratic Party apparatus and unions’ “boots on the ground” behind him, but Tuck has made up that difference in money, Gordon said. The funding has enabled independent expenditure committees for Tuck to run a sophisticated campaign, using technology to micro-target voters with difference messages.

Tuck can play to voters in both parties in nuanced ways that Thurmond can’t, Gordon said. “Tony has to double-down on his Democratic base.”

Note: This story was updated to include an additional $5.5 million spent on behalf of organizations and individuals not contributing to an independent expenditure committee, including the California Democratic Party on behalf of Thurmond.