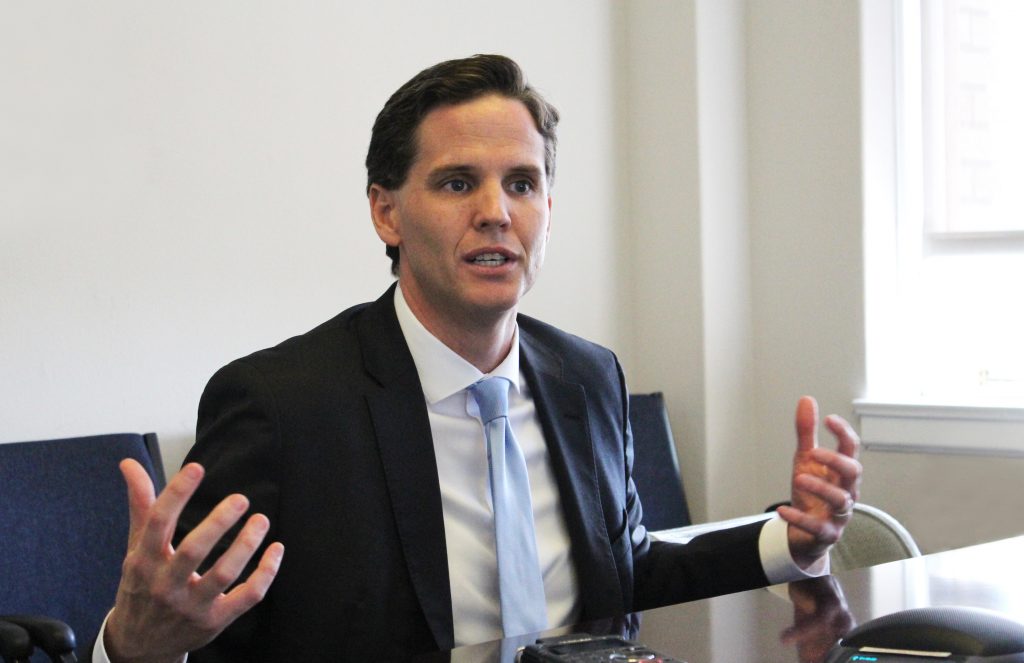 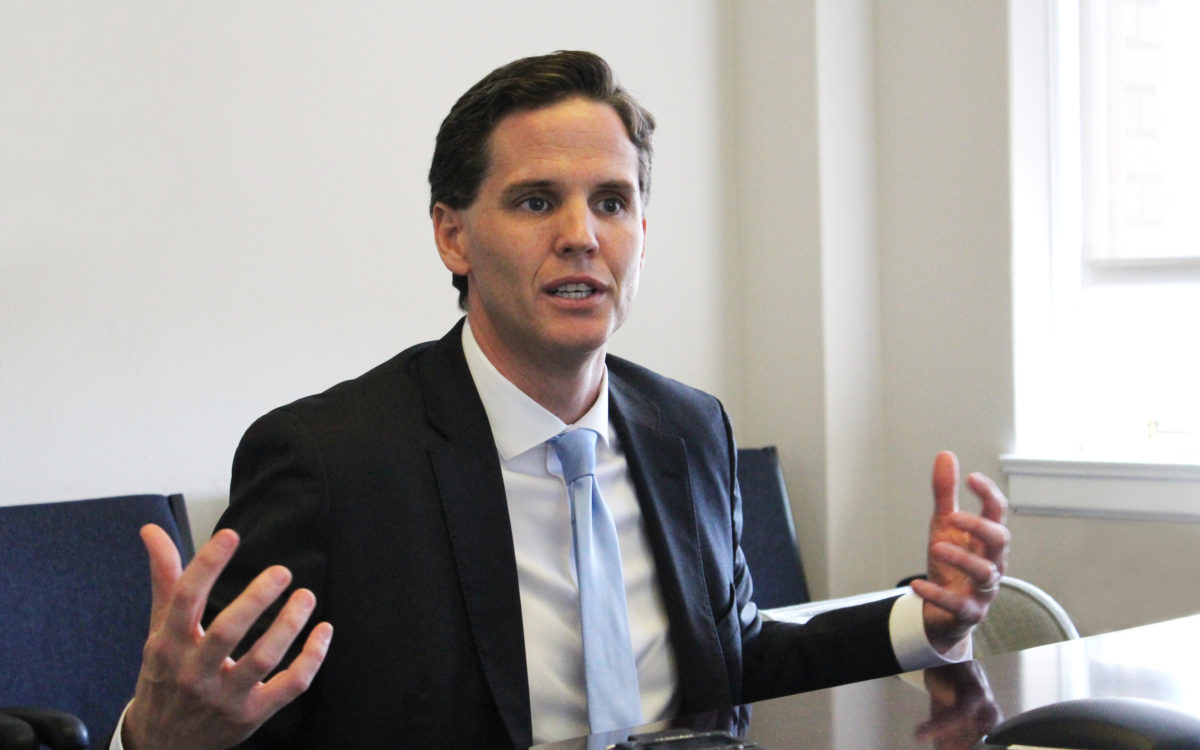 Marshall Tuck is back with the intensity that took him tantalizingly close in 2014 to upending Tom Torlakson’s bid for a second and final term as state superintendent of public instruction. Armed with his own Marshall Plan for education, he’s running for California’s top job in K-12 education to advance ideas and policies he pursued as a school executive for charter and district schools in Los Angeles.

Since losing his first campaign for elective office to Torlakson, 48 to 52 percent, Tuck, 44, has updated his detailed vision in 10,000 words with 35 subtopics on his website to “dramatically improve our public schools.” He has updated his resume to include two years as the educator-in-residence at the New Teacher Center, a national nonprofit based in Santa Cruz that works with school districts to develop teachers and principals. His son, a toddler four years ago, is finishing kindergarten in a neighborhood school in Los Angeles Unified.

But Tuck’s message is essentially the same: In California, the fifth-largest economy in the world, “we are not delivering on the promise of public education for all students” — not when more than half of the state’s 6.2 million students are not reading at grade level, and only a third are testing at grade level in math.

“A lot of people blame educators for what is going on, and that is completely wrong. Teachers did not underfund their classrooms; principals did not smother their schools in red tape,” he said during an EdSource candidates’ forum last week. “Politicians made these decisions, and that’s why we have to change the politics in education. It starts with electing an educator to be superintendent and not just another politician,” he said without naming the candidate next to him, Assemblyman Tony Thurmond.

Yes, he acknowledged in an earlier interview at EdSource, there has been progress under Gov. Jerry Brown. The state adopted better academic standards in math, reading and science. It has phased in the Local Control Funding Formula, directing more money to kids in poverty.

“There have been a couple of big shifts and we need a lot more,” he said. He elaborated on what must be done “to really move the needle”:

Speaking quickly and energetically, Tuck cites data and school strategies. “I know what it takes to turn around low-performing schools because I have done it,” he says.

Tuck entered education not as a classroom teacher but as a reform-minded administrator fresh out of Harvard Business School. The youngest of four children, Tuck was born in Burlingame, south of San Francisco, the son of a lawyer and a kindergarten teacher who taught in low-income East Palo Alto.

After graduating from San Mateo High and then UCLA in 1995, Tuck worked for the investment firm Salomon Brothers but soon became disillusioned. “I was working on paper on what was a big job, doing pretty well but I wasn’t happy at all,” he said. “I realized I had to work on stuff that was much more connected to my heart and my values. My focus is how I can help people with a better life, and in our state and our country what can change the most lives is public education.”

He quit after two years, then taught for a year abroad, in Zimbabwe and Thailand. He returned committed to improve education at home. After getting a master’s in business from Harvard, he took a job with a Silicon Valley software startup, Model N, to pay off school debt.

A year later, in 2002, he shifted to education, becoming the first president of the newly founded Green Dot Public Schools. He helped to create a network of 10 charter high schools in low-income neighborhoods of Los Angeles. Five years later, he became founding CEO of the nonprofit Partnership for Los Angeles Schools, whose goal was to turn around some of Los Angeles Unified’s lowest-performing schools with the highest dropout rates. Initially 10 schools with 15,000 students, the partnership has grown to 18 schools.

The partnership was a compromise brokered with then-Mayor Antonio Villaraigosa after his failed attempt to take over the district. A semi-autonomous district within a district, the partnership has freedom to improvise while adhering to union agreements. Tuck and the leadership team took advantage of flexibility from district rules, including the ability to raise enough philanthropic donations to boost funding by $650 per student.

To recruit more candidates to lead struggling schools, the Partnership paid principals $25,000 more; it redid the daily schedule to build in more teacher training. It started a Parent College — a parent education program offered once a month for three hours. It expanded college-qualifying high school courses and brought in health services from the community.

Tuck points to significant increases in graduation rates and drops in truancy and suspension rates as evidence that the strategies worked. A 10th anniversary report in 2017 by the nonprofit Public Impact commended the partnership’s strategies and found “strong performance” gains. “Most of the schools that joined the Partnership network — particularly high schools — have had steady gains in student achievement and other student outcomes,” the report said. “Together, the data and the changes modeled in Partnership schools signal what may be achieved districtwide to ensure that all L.A. Unified students have access to a high-quality education.”

But the report also found big variations among individual schools. And it found gains in test scores, compared with schools statewide, were small in the first three years when Tuck was CEO. Tuck said those years coincided with instability caused by massive layoffs of newly hired teachers — at some schools more than half the staff — due to district budget cuts. The gains in scores picked up in years four to six, he said, with stronger school leaders and teacher training. “The effect of professional development takes time,” he said.

Tuck said he left after 6 ½ years to run for state superintendent “because I became convinced if we don’t change some of these underlying policy issues, even with all this hard work in the field we’ll never educate all kids.”

During the two years at the New Teacher Center after his loss in 2014, Tuck worked on a teacher mentoring program in Fresno Unified for a $50 million federal innovation grant and on a principal training project in two California districts.

New Teacher Center founder and CEO Ellen Moir said she hired Tuck because he is “a smart, strategic thinker” with a track record in California. “We would meet every week and strategize together. I really respect him — he cares deeply about public education, teachers and underserved kids.”

Big donors are back

Tuck’s 2014 race for state superintendent was as expensive as it was close. The nearly $30 million raised by the candidates or on their behalf by independent expenditure committees — primarily the California Teachers Association and other unions supporting Torlakson, and by wealthy supporters of charter schools backing Tuck — set a record for the office.

The same donors are out in force again, with CTA and unions throwing more than $3 million so far behind Thurmond and wealthy charter school donors channeling $6.4 million for Tuck through an independent campaign committee run by the nonprofit EdVoice for the Kids PAC, which advocates for charter schools and changes in teacher tenure and layoff laws.

Among those endorsing Tuck are former U.S. Secretary of Education Arne Duncan, the Association of California School Administrators, four members of the Assembly and three state senators.

Like Thurmond, Tuck says more ineffective charters should be shut down. And both favor banning the operation of for-profit charter schools, of which there are only about a half-dozen in the state. But Tuck opposes a moratorium on charters and eliminating charter appeals to counties and the state board, while Thurmond supports the concept of a “pause” in approvals.

“Our state should continue to support high-quality, non-profit charter schools, especially in areas where there have been few or no high quality public school alternatives,” he writes in his action plan.

As for his post-election to-do list: His first action, he said, would be to reverse Torlakson’s 2015 guidance to districts allowing them to use money targeted for poor students and English learners for districtwide teacher raises. “That was a significant policy mistake with real implications for high-poverty kids,” he said. Instead, districts would have to use the money exclusively for high-poverty schools, to extend the school day, hire more teachers and counselors or create pay incentives to draw the best teachers to those schools.