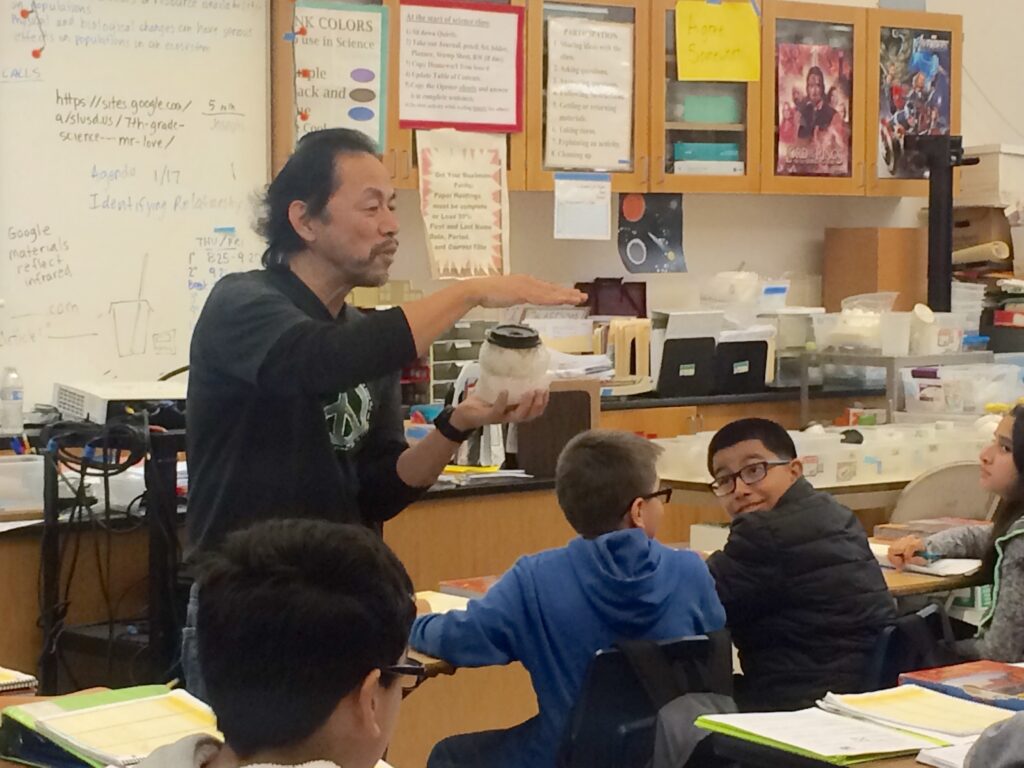 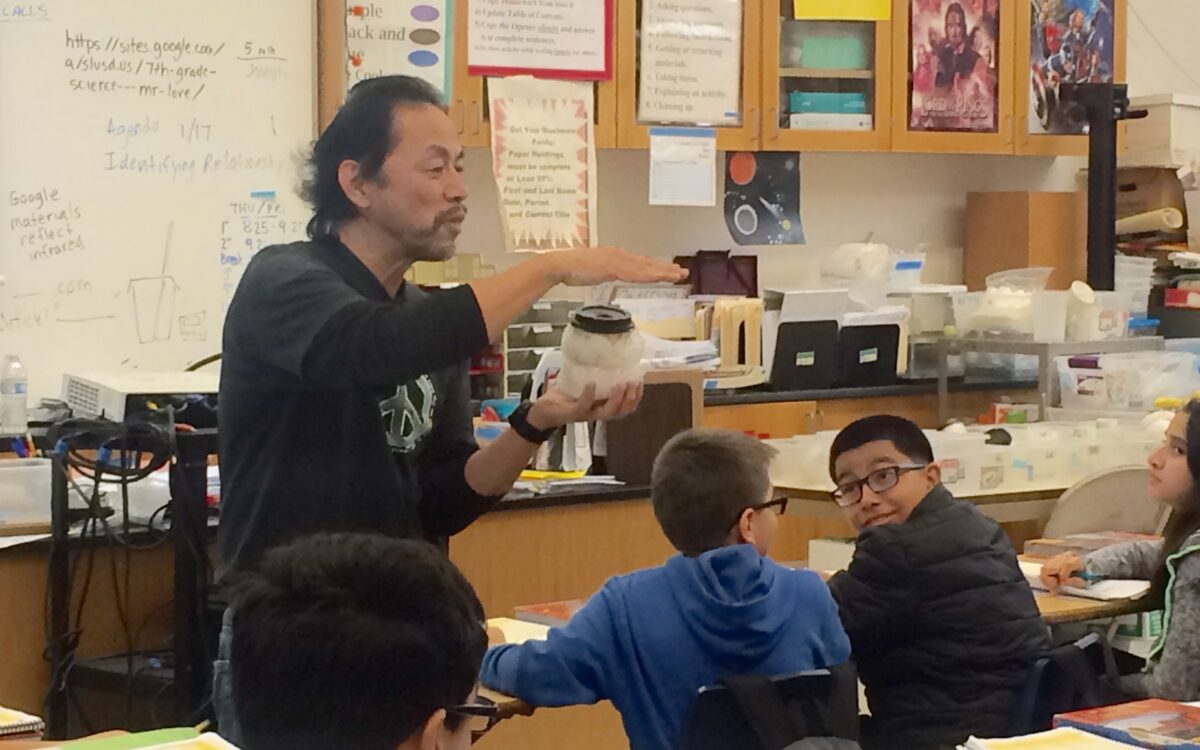 California has a far more racially and ethnically diverse teaching force than it had 20 years ago — and a more diverse one than is the case nationally. About about 1 in 3 of the state’s 305,000 teachers are teachers of color, compared to 1 in 5 teachers across the nation.

But during the same period, California’s public school student population has also become more diverse. As a result, the diversity gap between teachers and students has barely narrowed, and in some cases widened.

The results underscore the ongoing challenge that California has in creating a teaching force that mirrors the diversity of its student body.  Students of color now comprise three quarters of the state’s 6.2 million public school enrollment.

The task is exacerbated by teacher shortages being experienced by many districts, especially in hard-to-staff subjects like math, science and special education, and in urban and rural school districts, precisely those that often have the most diverse student populations.

It is not just a question of demographics. A growing body of research suggests that having teachers that mirror the racial and ethnic diversity of their students can have an impact on how well their students do academically.

A recent report from the Learning Policy Institute, a research and policy organization in Palo Alto, cites studies that found “that teachers of color boost the academic performance of students of color,” on measures such as improved reading and math scores, graduation rates and greater aspirations to attend college.

“More and more, districts are recognizing this and are looking for ways to recruit and retain more teachers of color,” said Desiree Carver-Thomas, the author of the report.

But prospective teachers must overcome numerous obstacles just to become a teacher, and districts face equally stiff challenges to retain them. “Unfortunately, the high cost of teacher preparation combined with low teacher salaries, obstacles to completing teacher preparation, and challenging teaching conditions can be especially hard on aspiring and veteran teachers of color,” Carver-Thomas said.

At the same time, she noted that there are numerous strategies to close the teacher-student diversity gap that have yielded positive results in several states that would boost the diversity of the teaching force if introduced on a wider scale.  Some are in place in California, but others have been phased out in recent years, victims of the state’s succession of budget crises.

By contrast, the percentage of Latino teachers has doubled substantially over the same period — from 11.5 percent to 20.2 percent of the teaching force. In actual numbers, that represents an increase from 31,000 to 62,000 teachers.

The proportion of Asian-American teachers also increased substantially — from 3.9 percent of the teaching force to 5.7 percent.

But because of a big decrease in the proportion of white students and the big increase in students of color, especially of Latino students, the teacher-student diversity gaps have widened in some cases.   Latino students now comprise 54 percent of the student body, and the Latino diversity gap between teachers and students has grown by 5 percentage points during that period.

Part of the problem in attempting to close the diversity gap is that recent graduates from racially and ethnically diverse backgrounds are discouraged from becoming teachers due to the cost of teacher preparation programs, which is compounded by low entry-level teacher salaries.

One reason students of color are put off from entering teaching is that they often end up with more student loans to pay off, and then have difficulties paying them down, the Learning Policy Institute report noted. According to one study, 12 years after earning a bachelor’s degree, black students nationally owed $43,000 more than white graduates. Latino students borrow as much as white students, but they default on their loans at twice the rate, according to a Brookings Institution report. Because of the relatively low teacher salaries they can expect, these high debt burdens dissuade students from entering the teaching profession.

Another challenge is that college completion rates among students of color are lower, including those in education programs.

However, there are multiple strategies that states have adopted that address the issue directly by “growing their own” teachers. California, for example, recently established a program that helps turn paraprofessionals like teacher aides into credentialed teachers. Since 2016, when the program started, over 2,000 paraprofessionals have become teachers. Half of them are Latino.  Another is the California Mini-Corps that attracts bilingual students to the profession through a range of activities, including mentoring from master teachers, monthly workshops and in-classroom experience.

Eric Heins, president of the California Teachers Association, said that multiple strategies are needed to close the diversity gap, beginning with reducing the student loan burden for prospective teachers, providing mentorship when they begin teaching, and tackling other challenges such as the high costs of housing.  “We know that if we have teachers who look like our students, it raises student learning because it gives them examples of adults who look like them, and are in successful positions,” he said. “But we have to make sure that this is a profession that is desirable to go into.”

Wesley Smith, executive director of the Association for California School Administrators, which represents about 17,000 district superintendents and other school administrators, said the issue was of “great concern” to his organization. “We have to get teachers (of color) into the pipeline,” he said.

Without sufficient role models, Smith said, “it is hard for students to aspire to something they have never seen, so let’s show them what’s possible.”

But getting teachers of color into the profession is one thing, he said. Retaining them is another. “We need to be more intentional about the supports we provide,” especially for beginning teachers. Adding to the problem is the lack of diversity among superintendents and other school administrators, such as principals who actually make hiring decisions. Smith said search firms brought in to recruit new superintendents are being prodded to diversify the talent pool they present for consideration to top district jobs.

Taryn Ishida, executive director of Californians for Justice, a nonprofit advocacy organization, said that having teachers from similar racial or ethnic backgrounds as students “helps students engage in learning. It helps them see different role models. It is high time that we started talking about the racial diversity of our teaching force and leadership in our schools.”

Several states subsidize the cost of teacher preparation, in return for a commitment to teach in high-needs schools or subject areas. The best known is the North Carolina Teaching Fellow Program, which provides over $8,000 dollars for up to four years to attend approved programs in return for agreeing to teach in the state for at least four years. Other states forgive student loans in return for such a commitment, as does the federal  TEACH program.

Another strategy is supporting teacher “residency” programs during which teachers in training spend time with mentor teachers, much like a medical resident learns by tracking an expert practioner in their field. About half of students in these programs nationally are students of color. In some districts in California the number is even higher. About two-thirds of participants in the San Francisco Teacher Residency, for example, are students of color.

Other programs help support beginning teachers so they are more likely to stay in the profession, focus on improving teaching conditions, or provide training for principals and other school administrators. Studies have shown that teachers of color in schools with a predominantly white staff are less likely to switch schools if they receive strong administrative support.

**Diversity gap refers to the difference between the percentage of teachers from one racial or ethnic group, and the percentage of students from the same group., in percentage points.
Data source: California Dept. of Education, Dataquest;
Graphic by Yuxuan Xie.