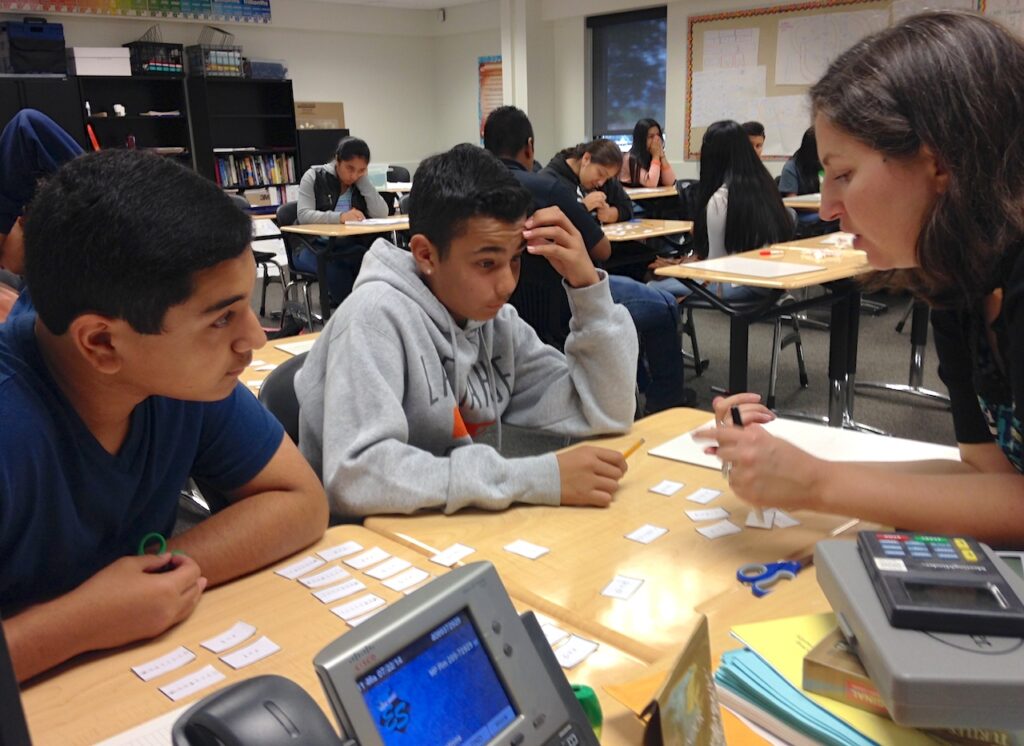 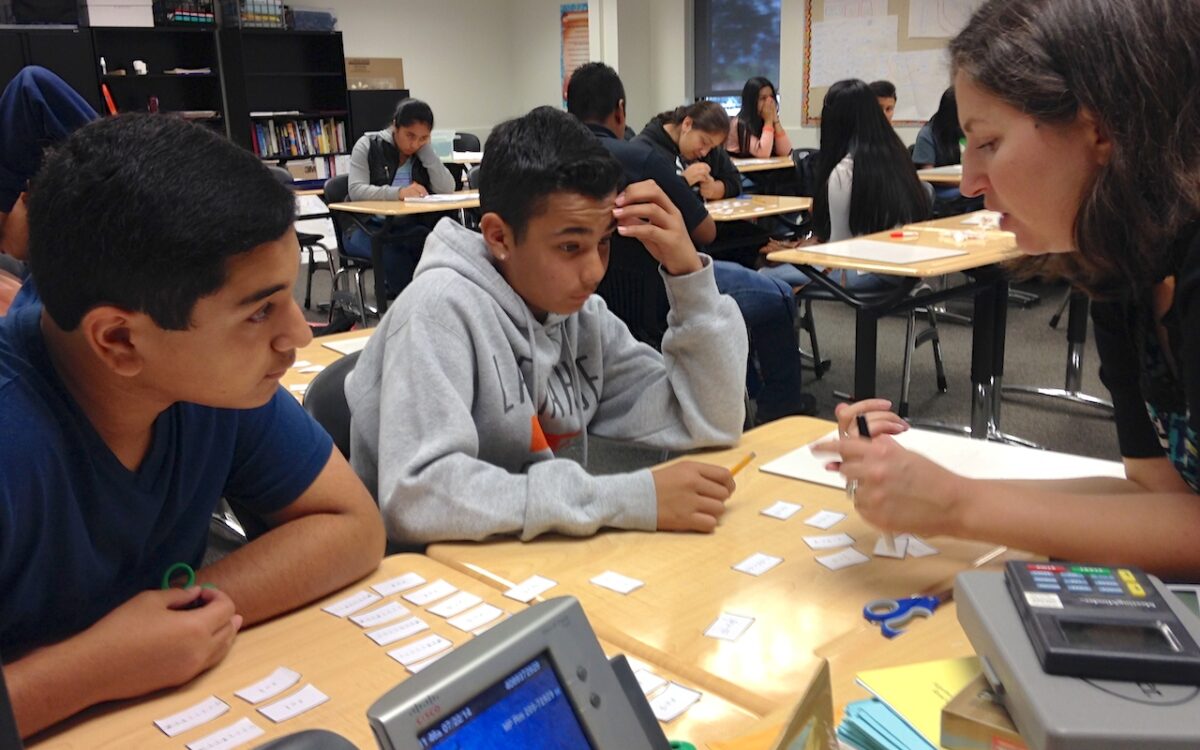 In moving to the Common Core State Standards this year, California school districts had to choose between serving up high school math as one big stew or as the curricular equivalent of separate courses. That option has created strong, sometimes passionate disagreements among parents and teachers who argue that a blended or “integrated” approach offers a clearer method of instruction and those who prefer sticking with a familiar sequence of courses. The latter group includes high-achieving districts in Silicon Valley.

A second look at acceleration

The adoption of Common Core and switch to local control have renewed the debate on when students should accelerate to take Calculus in high school and who should take advanced courses. See accompanying article.

In the “traditional” sequence, Algebra I will be taught in 9th grade, followed by Geometry, then Algebra II in the junior year, leading to pre-calculus, Advanced Placement statistics, or, if students are more advanced, Calculus in their senior year. In “integrated” math, as the name implies, the same standards for algebra, geometry, trigonometry and statistics are reassembled and woven together to show their interrelationships in three yearly courses of increasing difficulty. Proponents are also calling this Mathematics I, II, and III or International I, II and III, because, they point out, math is taught this way in most high performing nations.

California was one of 46 states, along with Washington, D.C., that adopted the nationwide Common Core standards in math and English language arts four years ago, although three states – Indiana, South Carolina and Oklahoma – have recently rescinded them, and two more states may also do so. The academicians who wrote the Common Core math standards on behalf of the nation’s chief state school officers and a bipartisan group of governors were agnostic about the two pathways for high school math. Either, if taught effectively, they said, would prepare students well for work and college in the 21st century.

Some states, including New York, have chosen the traditional sequence, while others, including Utah and West Virginia, have chosen the integrated approach. In adopting the Common Core and subsequently approving a set of frameworks or guidelines for implementing them, the California State Board of Education decided that school districts should decide which pathway works best for them.

There is no current count of which approach districts are choosing. A questionnaire by the California County Superintendents Educational Services Association in fall 2013 found slightly more districts choosing integrated (34 percent) than traditional (26 percent) but 40 percent hadn’t yet decided. Among California’s largest districts, Los Angeles Unified, Long Beach Unified and – for at least next year – Fresno Unified are going with the traditional sequence while San Diego Unified, San Francisco Unified, Sacramento City Unified and Santa Ana are going with integrated math.

Among the proponents of integrated math is David Foster, the executive director of the Silicon Valley Math Initiative, which trains teachers and provides testing resources to districts, charter organizations and private schools. Common Core’s K-8 curriculum is already integrated, he said, introducing concepts of algebraic thinking (problems involving division and multiplication), fractions and geometry (areas of rectangles) in early grades, and then gradually adding complexity in middle school. Only in American high schools, he said, are Algebra and Geometry segregated, with a gap of a year separating beginning and advanced algebra and trigonometry.

“It makes a lot more sense for students to learn some Algebra this year and some next year, than to say, ‘Stop, do Geometry and then go back to Algebra,’” he said.

Barbara Schallau, the subject area coordinator for math in East Side Union High School District in San Jose, agreed. The district is transitioning to integrated math starting this fall. “All students would be better off going through an integrated pathway because it allows the development of concepts over time,” she said. “There is continuity and, more importantly, students revisit topics at a higher level, when they are more mathematically mature.”

Schallau is confident that the new Common Core 8 th grade math, which will include some of what had been covered before under Algebra I, will give students a solid grounding for high school math. Before, she said, students who initially struggled with Algebra I in 8th grade would become frustrated and hate math after repeating it once, sometimes twice in high school. Because high school students will view three years of integrated math as a package, not discrete courses, more will graduate qualified to attend the University of California or the California State University, she predicts. And more, she hopes, will go on to take pre-calculus or AP statistics.

There’s also agreement that Common Core will be a heavy lift for teachers, who will be asked to do more coaching and less lecturing from the front of the class.

Although some East Side Union math teachers are as optimistic, some are skeptical. Catherine Duhring, a fifth-year Algebra and Geometry teacher at Mount Pleasant High who is leading the school’s transition to Integrated I, said she is excited about Common Core’s potential to engage students in real-world problems and challenge their passive approach to learning math. “Some kids just want to memorize the tricks to solving problems. I want them to make sense of math, to persevere to find answers on their own so they can say with confidence, ‘I can handle this.’”

But her colleague at Mount Pleasant, 20-year veteran Sudhir Karandikar, says it is unrealistic to expect students in a standard class period to learn skills and procedures in multiple math domains and do project-based learning. “There will be far more engagement in theory but there also could be more frustration,” he said.

Safer option for a challenging transition

Duhring and Karandikar do agree that implementing Integrated I in the coming year will be difficult. They expect incoming 9th-graders who have not benefited from Common Core math in 8th grade will have big gaps in knowledge. And they will be teaching on the fly, developing lesson plans for an open-source curriculum, the Mathematics Vision Project, developed in Utah. “It’s very overwhelming,” Duhring said. “Every time I think about it my brain shakes.”

“In an ideal sense, I agree integrated is a stronger approach to math,” Lianides said. But there’s no data to show that integrated will get better results, he said, especially in the transition, when all districts are struggling to train teachers in the new standards and find adequate textbooks and materials. Asked for their views, about 60 percent of teachers responding in Sequoia favored the integrated approach. Lianides recommended traditional and the five-member schools board backed that choice, 3-2.

For Lianides and Barry Groves, superintendent of the Mountain View-Los Altos High School District, where 20 percent of students come from low-income families and 70 percent of graduates go on to four-year colleges, the decision to stick with the traditional sequence was pragmatic.

“We’ve had a lot of success with the current math program in getting kids ready for college,” Groves said. Making accommodations within an existing curriculum instead of starting from scratch to build a new one removes a layer of complexity and creates one less worry for teachers who already are feeling pressure, he said.

But districts that choose traditional could be missing an opportunity,said Gina Dalma, senior education program officer for the Silicon Valley Community Foundation. The foundation has underwritten discussions between K-8 feeder districts and high school districts throughout Silicon Valley about Common Core math options. Dalma worries “there will be no impetus to change instruction,” which is necessary to effectively implement Common Core, with its dramatically different mix of content and skills.

“Integrated math is more of a refresh – an opportunity to rethink how kids are placed and start with a clean slate,” she said. She is concerned that without that clean break, the traditional sequence will perpetuate the status quo, including the tracking of students, a practice based on the assumption, starting in early grades, that minority kids and English learners can’t handle advanced math courses.

Like Schallau, a firm believer in the value of integrated math, Marchbanks predicts that districts will consider switching to the integrated pathway “once we demonstrate that kids will do well and college acceptances won’t be hurt.”

UC, CSU are agnostic on pathways

When it comes to the math debate, there is common ground.

Supporters of both pathways say that each approach, by stressing problem solving over memorization and mastery of procedures – a common criticism of California’s math standards – will be very demanding. In a presentation before the State Board of Education, Chris Dell, director of K-12 Mathematics and Technology for the Shasta County Office of Education, characterized Common Core’s focus on a deeper understanding as a shift from “how to why.” ­There’s also agreement that Common Core will be a heavy lift for teachers, who will be asked to do more coaching and less lecturing from the front of the class.

“I had not one request from a parent to go integrated,” said Barry Groves, superintendent of the Mountain View-Los Altos High School District. “I got many questions from parents worried we might go integrated.”

Compared with the old Algebra I, both Integrated I and Common Core Algebra I will assume that students know more at the start of the year and will take students further by the end of year. That’s because Common Core’s 8th-grade math will cover topics previously offered in California’s version of Algebra I.

Both pathways are acceptable for admission to the University of California. Twice over the past year, the UC faculty board that oversees high math school courses has said it doesn’t prefer one option over the other.

But that didn’t mollify many parents in the wealthier districts of Silicon Valley, where students compete to get into the top University of California campuses and private colleges. For those parents, the traditional path was the safer option. “I had not one request from a parent to go integrated,” said Groves. “I got many questions from parents worried we might go integrated.” None of the private schools in the region are choosing integrated, Groves said, another factor behind their decision.

Foster characterized the parents’ perceptions as, “We are winning, so don’t change the rules. We already can get kids to go to Stanford and MIT.” Parents who know how to help their students with Geometry didn’t understand the rationale behind Integrated II and why it might be better for their kids, he said.

But Foster also acknowledged that in the end, what will matter most will be implementation in the classroom, not the choice of pathway.

“Nobody has ever said standards change education or teaching,” he said. “Class size does not matter, what curriculum you use does not matter. All that ever matters is teaching. And so will this help teachers be better at teaching? I hope so.”