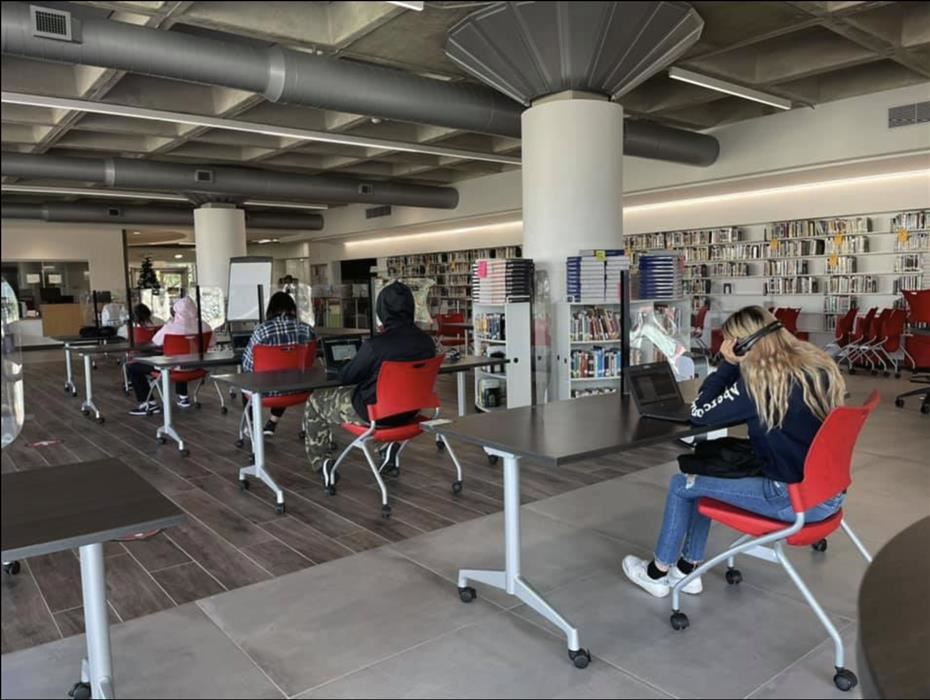 Fear of coronavirus remains widespread despite growing access to vaccines

Students who are learning English as a second language have priority to return to in-person class at some school districts in California, but many are still staying home because their parents fear the risk of Covid-19 infection is too high.

For English learners, live instruction and small groups can offer more opportunities to practice English, a critical part of learning the language. Teachers have tried to maintain the additional communication that English learners most often benefit from — speaking and interacting with peers and teachers — in order to help them learn to speak, read and write fluently. But it remains a difficult task to virtually recreate the level of support that English learners need as they learn a new language.

More than a year into distance learning, school officials and researchers fear that English learners are among the students experiencing the highest levels of learning loss. A recent report from Policy Analysis for California Education, a Stanford University-based research organization, compared assessment results between fall 2019 and fall 2020 and found that English learners and low-income students in California “are falling behind more compared to others.”

“Average learning loss estimates mask the reality that some students in California are suffering much more during this time than are others,” the report’s authors concluded. “Without aggressive and bold actions, these students may never catch up; any funding or support designed to mitigate learning loss must be targeted specifically to the students who need it most.”

To help support English learners, the state named them one of the groups of students school districts must prioritize for in-person learning. They also included students who are homeless, in foster care or who have been chronically absent from online class.

Still, many families contacted by EdSource are choosing to keep their students at home for the remainder of the school year because they fear infection, even as they gain access to vaccines that protect against Covid-19 infections.

In California, low-income, Latino and immigrant communities have been hard-hit by infections and deaths related to Covid-19. During the last half of 2020, Covid-19 deaths among Latinos were up to eight times higher than among non-Hispanic whites, according to a study by UCLA’s Center for the Study of Latino Health and Culture.

“That’s an increase of over 1,000%,” Los Angeles County Public Health Director Barbara Ferrer said during a press briefing at the time.

In Oakland Unified School District, where English learners comprise 31% of the district’s student population, all students from transitional kindergarten to 6th grade have the option to come back for a few hours of in-person instruction a couple of days a week. However, English learners can come back even if they are in middle or high school.

Still, about half of English learners in elementary school remain in distance learning, according to Nicole Knight, executive director of English Language Learner and Multilingual Achievement at Oakland Unified. About half of the students are also opting out of in-person learning at Oakland International High School, where all students are newcomers who recently arrived from another country.

“We are maintaining the distance learning program to the greatest extent possible, in great part because we have these large groups” opting out of in-person learning, Knight said.

Maria Jimenez isn’t planning on sending any of her six children, ages 5 to 17, back to in-person classes at Oakland Unified. The youngest, a kindergartner, is still learning English.

“It’s too much of a risk, and they only get two hours a day for one more month of school before the year ends,” said Jimenez, whose husband is currently unemployed and cares for the children during the day.

Students enrolled at Baldwin Park Unified School District in Los Angeles County’s San Gabriel Valley will begin returning to their classrooms this month, and English learners are one group of students that will be offered additional in-person support. But Charlene Fried, who teaches high school students who are learning English as a second language at Sierra Vista High School in the district, said many have indicated they will not return to their classrooms.

“I would imagine that most of the kids are going to remain in distance learning,” she said. “When I talked to my kids, they all said, ‘We want to be back; we miss you.’ But now they’re saying, ‘Our parents are afraid for us.’”

Fried said she has seen the disproportionate impact of Covid-19 on immigrant households because many of her students have had grandparents or other family members who got sick.

“A lot of my students live with multiple generations, so we have to deal with this every single day,” Fried said.

Despite the challenges of distance learning, Fried says her students are eager to learn and are progressing in their language skills. Some of her students have returned to their native countries, such as Mexico and El Salvador, but still attend class virtually every day.

Los Angeles Unified, which has over 120,000 English learners — the largest number of English learners among California school districts — offered in-person, one-on-one tutoring for English learners for a short period of time during the fall semester. Shortly after, rising Covid-19 transmission rates shut down all in-person activities across the district.

“Learning English while learning to read and while learning content… it is a completely different demand for an English learner than it is for let’s say an English-only child who already speaks English,” Acosta Stephens said. “So the need that an English learner has to do all of these things simultaneously requires that we have additional support services for those students who may not be making progress.”

Since February, the district has offered additional instruction time for English learners as they prepare to take their yearly English language assessment, known as the English Language Proficiency Assessment for California. This additional support has been held entirely online, but it will be moved to in-person as Los Angeles Unified schools slowly reopen throughout the month of April.

Each school decides the type of support to offer, depending on students’ needs. That can include one-on-one tutoring or small group instruction, which is provided after school or on Saturdays.

“Each school determines based on the number of English learners and the need. Is it small group, or do we need to pivot and provide one-to-one?” Acosta Stephens said.

So far, however, it’s unclear how many English learners will actually join in person. The latest results from the district’s ongoing reopening survey show that 35% of middle school students and 25% of high school students whose families have responded to the survey will return to their classrooms. The results do not provide a breakdown of student demographics that would indicate how many of those students are English learners.

If all remaining families who have not responded to the survey choose to stay online, only 24% of middle school students and 16% of high school students will return to their classrooms in person.

The program was temporarily shut down by the end of the year as Covid-19 rates rose in Santa Ana, which is predominantly an immigrant and working-class community, but has since reopened and expanded to more schools in the district.

It will remain the only in-person option available to students until the summer. Santa Ana Unified is the only district in Orange County that will remain online for the entirety of the current spring semester. Among the county’s districts, Santa Ana has been the hardest-hit by Covid-19.

Even as rates of Covid-19 decrease and vaccination rates increase in California, parents remain wary of sending their children back to classrooms.

Mireya Pacheco’s 6th-grade daughter is an English learner at Acton-Agua Dulce Unified School District, in Los Angeles County’s San Fernando Valley. She attends in-person sessions for support and tutoring one day a week for 45 minutes in a small group for English learners with only two other students. However, Pacheco is not ready to send all of her children back to school in larger groups or for longer periods per day.

“I’m afraid they will get infected. I’ve heard stories of infection, and I have friends who were sick, and a family member in Mexico died of Covid,” Pacheco said. She said that growing access to Covid-19 vaccines does not change how she feels about in-person learning. “So for the time being, I’ve decided not to send them back to school until next school year.”