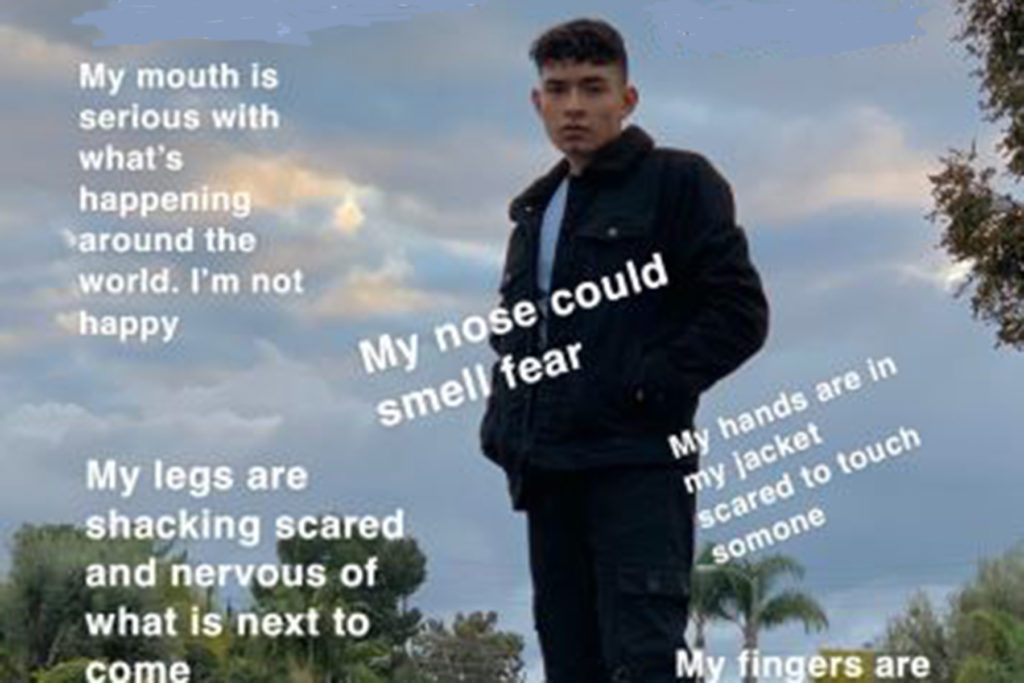 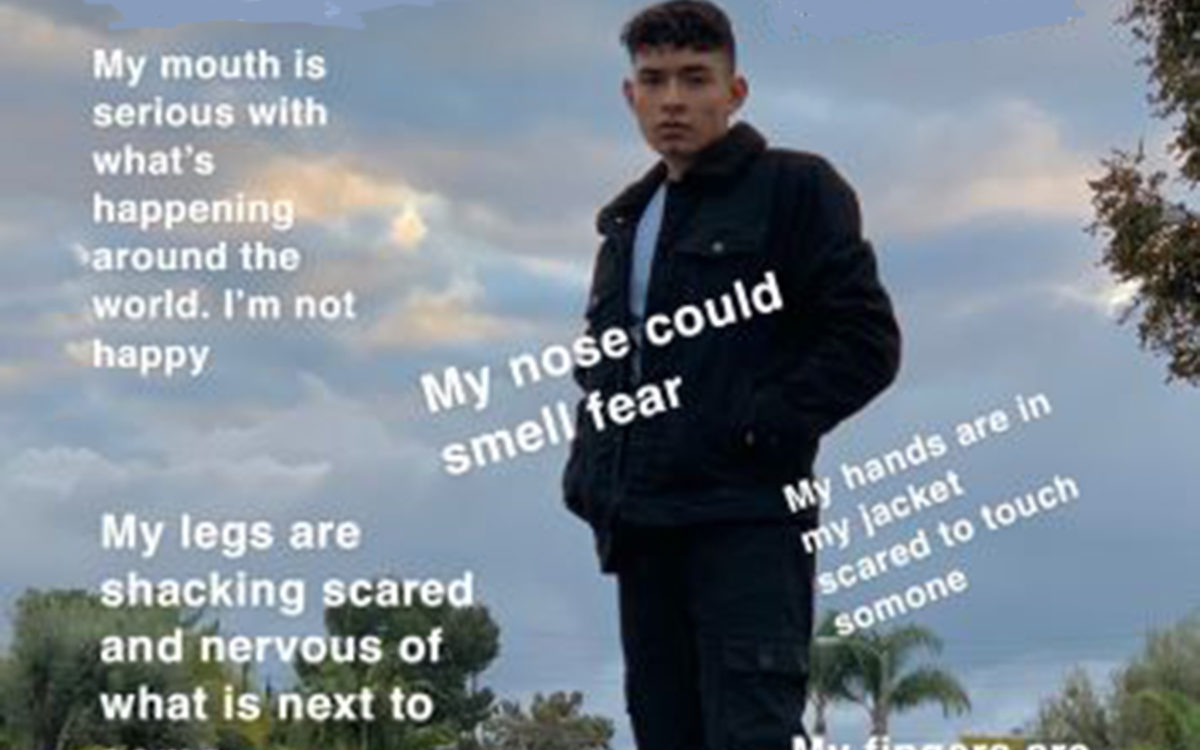 Photo courtesy of Charlene Fried
Students in Charlene Fried's class in Baldwin Park used pictures to write about how the coronavirus impacted them.

Photo courtesy of Charlene Fried
Students in Charlene Fried's class in Baldwin Park used pictures to write about how the coronavirus impacted them.

When schools across California canceled in-person classes in the spring, some students lost crucial opportunities to learn and practice their new language — English.

About one-fifth of students in California are learning English as a second language, and most of their classes are only in English. In order to learn to speak, read and write fluently, they need additional language classes and many opportunities to practice speaking and interacting with peers and teachers, which can be difficult remotely.

Researchers and advocates for English learners say during distance learning, schools need to prioritize live instruction and small groups. They also need to work with families in their native languages to support learning at home and provide social-emotional support to ease anxiety and stress caused by the pandemic.

But many researchers, parents and teachers are worried that students learning English are not getting the help or the language instruction they need.

“As a former English language learner myself, I can say that we are definitely not doing a really good job at addressing our English language learners,” said Paulina Martínez-Pérez, who teaches ninth- and 10th-grade biology at the high school campus of the Chula Vista Learning Community Charter School in San Diego County. Martínez-Pérez said she isn’t speaking about her school specifically, but about English learners statewide.

“I’m terrified to see the research of academic proficiency of our ELL students and our students with disabilities, post-Covid-19,” she said. “It’s going to be really bad.”

Martínez-Pérez said she currently has 16 students who are not considered fluent in English, including a handful of students who recently immigrated from other countries right before the pandemic began. Normally, she said she would have paired these students up with classmates who could sit next to them and help them with English text, in addition to spending time herself during class helping them one-on-one, but it has been difficult to do that remotely.

She said it’s also hard to virtually create the language-rich environment that she knows is necessary for students who are learning English.

“Your walls need to be dripping with language. Content and language need to be everywhere — on your walls, on your board, in their notebook. All of a sudden you cut that, students are in their home with no access to that language, and all they see is the screen,” Martínez-Pérez said.

All districts were required to submit reports to their county superintendent on how they conducted distance learning in the spring, including how they met the needs of English learners.

According to an analysis released in September by Californians Together, a statewide coalition focused on improving education for English learners, 4 out of 10 districts with large proportions or numbers of English learners included little to no explanation of how they were providing English language development. In addition, they found that almost a third of districts did not mention translating communications for families of English learners.

“For us, it’s a precursor for what they hopefully want to improve and hopefully not do the same,” said Shelly Spiegel-Coleman, former executive director and now strategic adviser for Californians Together.

“Spring was an emergency; we understand that,” she said. “But if you just deliver to the whole class, and you don’t identify individual students and individual cohorts of students that have special needs, starting now, we’ll see the same thing we saw in spring.”

Teachers, district leaders and parents across California said that instruction has improved for English learners since the spring, but there are still many challenges.

Cecilia Casas, a mother in Firebaugh, near Fresno in the Central Valley, said her children speak both Spanish and English but have not yet been classified as academically fluent in English by the school district. She is worried her children — ages 9, 12 and 15 — are not getting as much time with teachers to ask questions or get help with classwork during distance learning.

Casas speaks Spanish only. She and some other parents who are not fluent in English said they have trouble helping their children because all of the work is in English, and they haven’t received much information in their native languages from schools about how to help.

State law requires districts and charter schools to develop a “Learning Continuity and Attendance Plan” for this school year, including an explanation of how they will address students with unique needs, including English learners, foster youth and low-income students. However, the plan template does not explicitly ask districts to explain how they will provide English language development, and the state has not set a minimum number of live instructional minutes for English learners. Both are practices advocacy organizations would like to see included as requirements.

“CDE recognizes that the pandemic has had a disproportionate impact on our English learners and is committed to providing resources to support English learner, immigrant, newcomer and migratory students during distance learning,” wrote California Department of Education spokesman Jonathan Mendick in an email. Mendick pointed out that the department has developed a webpage with resources for distance learning for English learners, and he said the department reviews school districts and charter schools to make sure they comply with federal and state requirements.

Several large districts, including Los Angeles Unified, San Francisco Unified, Oakland Unified and Fresno Unified, reported they prepared guidance for teachers on how to address English learners’ needs during the pandemic, and some designed distance learning lessons specifically for English learners. Still, there are challenges.

“We do still have large numbers of students who aren’t engaging regularly, particularly our newcomers,” said Nicole Knight, executive director of English Language Learner and Multilingual Achievement at Oakland Unified. “Imagine not having stable housing or being in a small place with multiple families. Our older kids, many of them have to work. Many of our students need to care for younger siblings. That’s very real and definitely, absolutely is a barrier to this work.”

Some teachers are coming up with new assignments focused on helping students cope with the pandemic and at the same time practice and develop their English skills. Charlene Fried teaches high schoolers who are learning English as a second language at Sierra Vista High School in Baldwin Park Unified, in Los Angeles County. Her students designed superheroes to save humanity from the coronavirus, using 10 adjectives and 10 verbs in English. She said writing the stories helped her students learn grammar, and discussing the stories with their classmates helped them practice talking and listening, essential for learning a new language.

“I want my kids to create, not consume; invent, not mimic. It’s so easy to consume and mimic when you’re behind a screen,” Fried said.

Her students also used photographs and pictures of themselves to write about how the coronavirus pandemic has affected them and made books about their families sheltering in place. She has students share their work in small groups in breakout rooms, select the best story in each group, and then hold an “awards ceremony” for the whole class — in which the winners have to give an acceptance speech — before presenting their work. All of this is designed to get students talking and sharing with each other in English.

“They’re really creative. I don’t want that creative spirit to die or that sense of community,” Fried said. “The grammar is embedded inadvertently, so they aren’t just memorizing verbs.”

Anna Pilhoefer, a literacy teacher at Cleveland Elementary School in Santa Barbara Unified, said the pandemic made her realize she needs to communicate more with parents and guardians.

“To be behind a screen teaching in English and Spanish has been really taxing on me as a teacher. Often at the end of the day I feel like turning off my computer and just crying,” Pilhoefer said.

She said she has had to make phone calls and send text messages on weekends and evenings to reach parents or grandparents, but it has paid off to have the support, especially with younger students. “I can’t be the be-all end-all. There has to be another adult who is there in the process,” she said.

Pilhoefer says she’s learned other lessons from distance learning, too — some students who are normally hesitant to talk out loud are using the chat feature, and she said she has found virtual breakout rooms easier to manage than multiple small groups in a classroom with 30 or more children.

Teachers and parents said breakout rooms also have disadvantages — a teacher can only supervise one group at a time; whereas, in a classroom, they might be more aware of what is happening in every corner.

“Our teachers are doing magic with our kids, little and big,” said Elizabeth Orozco, a mother in Nuevo, a rural community in Riverside County. “The biggest challenge I see is that in a classroom, a teacher can separate the children into groups or have an aide or a parent volunteer help the rest of the group while they help the English learners, or vice versa. But how do you help that teacher now?”

Pilhoefer said Santa Barbara Unified is planning on bringing small groups of students with unique needs back to the classroom, including some English learners.

“We can try as much as we can on Zoom, but they really need to be in a community of learners,” Pilhoefer said. “I truly believe that those kids need to be physically in school. We need to take health and safety seriously, but I think they need the one-on-one or the two-on-one support.”