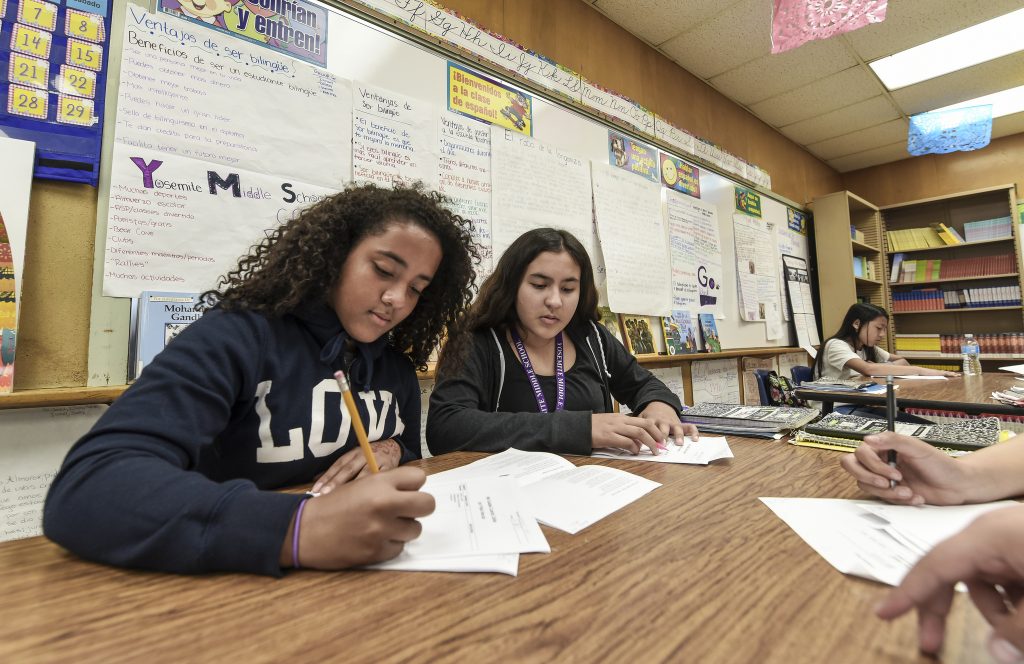 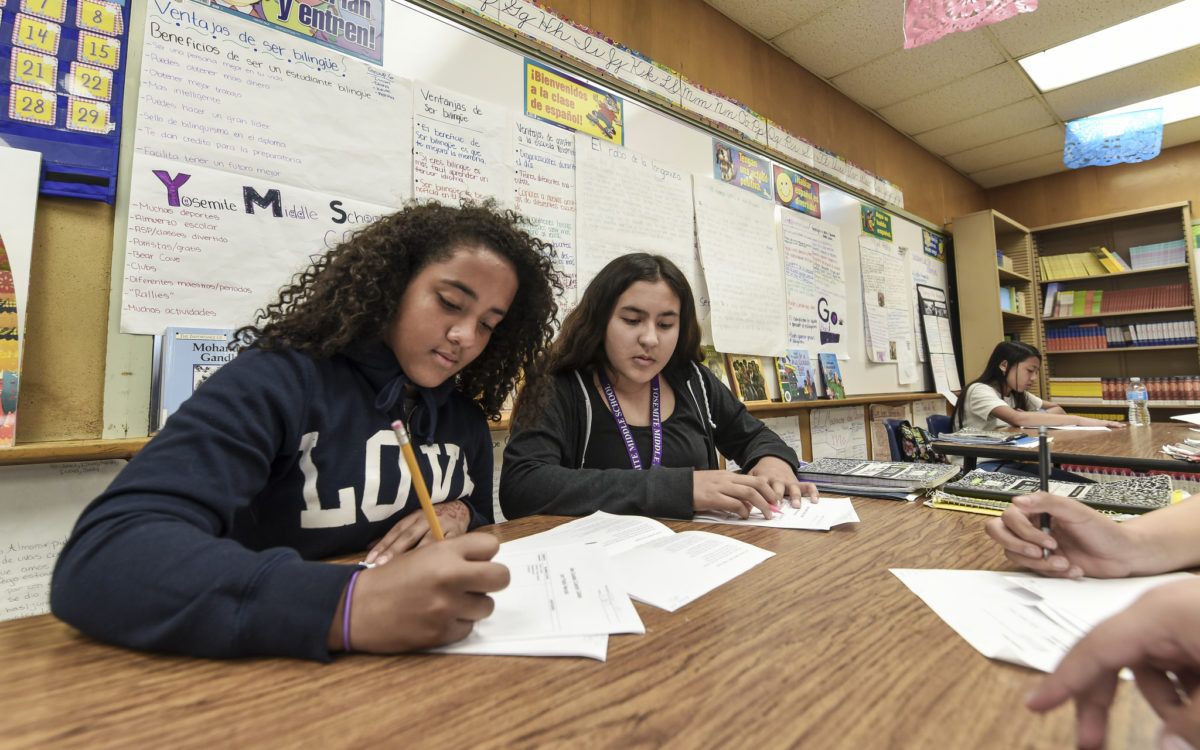 A decade after a landmark report on English learners, California still has a long way to go to help students learn English.

The coalition Californians Together released a new report Wednesday on long-term English learners, defined as students who have been enrolled in school in the U.S. for more than six years, but who have not yet achieved full academic fluency in English.

Research shows most students who speak a language other than English at home become proficient in English within five to seven years. Those students who take longer are at risk of never becoming fluent and missing out on academic content in other classes unless schools do more to support them.

The report, titled “Renewing Our Promise: Research and Recommendations to Support California’s Long-Term English Learners,” is a follow-up to a landmark report on long-term English learners, “Reparable Harm: Fulfilling the Unkept Promise of Educational Opportunity for California’s Long Term English Learners,” written by researcher Laurie Olsen and released by the same organization in 2010. That report, still hailed by many educators today, was the first to put a name to the phenomenon of students who spend years in English-language schools without learning English.

In the new report, “Renewing Our Promise,” Californians Together finds that the numbers and percentage of long-term English learners have decreased, from 52% to 46% in 2019-20, the last year for which data is available. But that decrease is not sufficient, according to the authors, Manuel Buenrostro and Julie Maxwell-Jolly.

“At the rate that we’re going, we’re still going to have way too many long-term English learners unless we continue to put pressure on the system and do more to change the way that we are working with our English learners,” Buenrostro said. “And we want to make sure that there’s a lot more urgency with the work that needs to be done for these students.”

“Ten years from now, we cannot be writing another report that finds that this is still an issue, because we know how to undo it, we know how to prevent it, and it’s just gone on too long,” said researcher Laurie Olsen.

By surveying 107 California school districts, which are among those with the greatest number or percentage of English learners, the authors found that many school districts are using what they call “research-supported practices” to help students become fluent faster. According to the report, many districts are making sure long-term English learners take courses they need to attend college and providing mentors and instructional aides. Still, they also found many districts are not doing enough to provide assistance in students’ home languages, professional development about the needs of long-term English learners, and instructional materials designed specifically for these students.

The report highlights seven school districts that are using strategies that the authors believe could be replicated in other districts in the state to help students become fluent faster. Buenrostro said they chose these districts based on their numbers of long-term English learners and based on math and English language arts standardized test scores for English learners and students who were previously English learners but have recently been recognized as fluent in English.

Garden Grove Unified School District has teachers and other staff “shadow” English learner students for a day, going with them to different classes to see what their experience of school is like.

“Something they’ve learned from the shadowing is that a lot of times the students might not even be speaking in class, right? So their experience might be one where they’re not really practicing language as much,” Buenrostro said. “That’s important because it gives you a data point about the student experience. But it also allows them to learn more about the culture. How is the student navigating throughout the school day? Do they have classmates that they can relate to, that they can speak to? Are they sitting in front of the classroom? Are they being called on by the teachers often?”

Several school districts now have English language courses that are specially designed for long-term English learners, recognizing that their language needs are not the same as those of students who recently arrived in the country and do not speak English at all. Buenrostro applauds these courses, but he said districts should make sure they are still giving English learners access to rigorous content in other areas.

“If we are going to have specialized courses for English learners, we want to make sure that they’re rigorous. We want to make sure, especially at the middle school and high school level, that they are part of a pathway for students to be college and career-ready. That is very important,” Buenrostro said.

Elk Grove Unified School District, near Sacramento, analyzed data on English learners and found that they were not as involved as other students with career technical education pathways, in which students learn technical skills for a career at the same time they learn academic content. Teachers in the district also reported that students who had been English learners for many years were not very engaged in their English language classes. Students appeared to be discouraged by still having to take English classes, in part because having to take those classes sometimes prevented them from being able to take electives or career pathway courses.

“We all teach English, no matter if I am a science teacher or I am a math teacher, we are all responsible for the English language development for all of our students,” said Lucy Bollinger, director of English learner services for Elk Grove Unified School District.

So the district began a computer programming class for eighth grade long-term English learners, in which students received computer programming and English language development in the same class. The students programmed small robots, GiggleBots, to follow simple commands. Lucy Bollinger, director of English learner services in the district, said the program truly engaged the students, in part because they were excited by the subject.

“They were looking forward to it, they were curious, it was driving them to ask questions, to try out new things, to even get past roadblocks or things that were challenges. That can sometimes shut any student down, but especially our long-term English learners,” Bollinger said.

To improve their English and learn more content at the same time, long-term English learners need to be talking with each other purposefully about what they are learning, Bollinger said. For example, they should be talking about texts they are reading, asking questions, using evidence and evaluating other students’ reasoning.

Bollinger said the district is also putting a lot of effort into providing professional development for teachers about how to best teach English learners, even when they do not specialize in teaching English.

“All students, no matter their level of English, should have access and be able to interact in their core classes,” Bollinger said. “We all teach English, no matter if I am a science teacher or I am a math teacher, we are all responsible for the English language development for all of our students.”

Buenrostro said it is especially important to look at what districts can do at the elementary school level to help students learn English within six years, before they become long-term English learners. The report highlights the work of Oak Grove School District in San Jose, for example, which expanded its dual-language immersion programs and uses the Sobrato Early Academic Language model, which teaches young children complex vocabulary, in both English and children’s home languages, and has been shown to help students become fluent in English.

Olsen, who wrote the first report on long-term English learners 10 years ago, said it is clear reading “Renewing the Promise” that the response was not enough.

“Reading the report, you get that picture that there are places that are really doing great, inspiring things, but there are far too many places where students are still being left behind in ways that could be avoided and should be avoided,” Olsen said.

Olsen hopes that the new report can spark more districts to invest in strategies like those highlighted by Californians Together, especially strategies at the elementary level.

“I would like to see more attention on preventing this from happening. It’s harder to undo the harm than it would be to prevent it,” Olsen said. “Ten years from now, we cannot be writing another report that finds that this is still an issue, because we know how to undo it, we know how to prevent it, and it’s just gone on too long.”