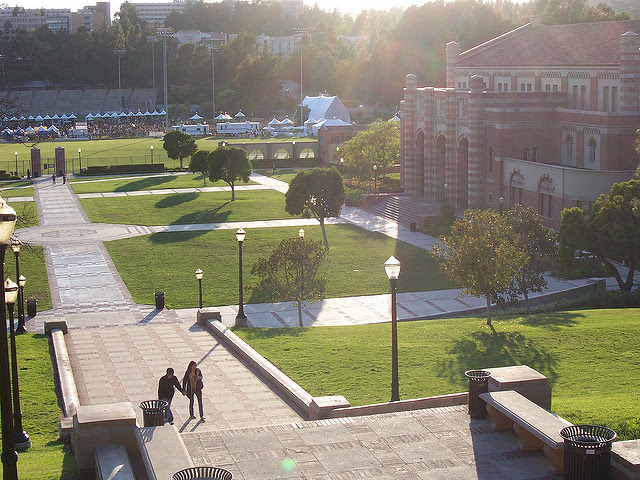 UC admits its most diverse class in its history

As universities across the state consider how to increase diversity on campus, the University of California’s fall admission class has the highest percentage ever of Latino students.

UC announced Thursday that it had offered a record number of Latino students admission to its nine undergraduate campuses for this fall. The students now comprise UC’s largest ethnic group of admitted freshmen, increasing from 34% last year to 36%.

UC did not disclose, however, how many of those students have indicated that they will enroll. In this pandemic time of mainly online classes, some UC campuses may see enrollment drops in the fall.

“This has been an incredibly challenging time as many students have been making their college decision in the midst of the Covid-19 pandemic,” UC President Janet Napolitano said. “UC continues to see increased admissions of underrepresented students as we seek to educate a diverse student body of future leaders. The incoming class will be one of our most talented and diverse yet, and UC is proud to invite them to join us.”

The admissions data is preliminary and reflects offers made as of June 23. The numbers will change as universities admit students from the system’s waitlist. This year, the UC System decided to admit as many students as possible to meet enrollment targets and student preferences. Because of the coronavirus pandemic, system officials said they’re seeing more students decide to enroll closer to home or delay going to college. That has allowed the campuses to reach deeper into the waitlist for students.

The campuses also admitted 28,074 transfer students, an increase of 1,374 including the largest-ever class from the California Community Colleges system. The campuses accepted 76% of all applicants, the same level as last year.

Alyssa Sierra, 17, and a Latina, was admitted to UC San Diego and UC Davis. A graduate of John F. Kennedy High School, in Granada Hills, Sierra initially planned to attend a private school in Massachusetts, but because of the Covid-19 pandemic, she will enroll in the San Diego campus to study computer engineering.

“It’s awesome that I’m able to go to school when many other people don’t have the opportunity to attend colleges, especially UCs,” she said. “I’m very grateful for having this opportunity and I hope that this encourages other Latinos to go for whatever it is that they want to pursue because although we don’t have the upper hand we’re still able to accomplish a lot.”

UC increased its admission offers to underrepresented groups, including Blacks and Latinos, by 4,678 for a total of 33,225 — a 16% increase from last year.

UC’s announcement about admitting more students from underrepresented groups comes as Californians prepare to reconsider the state’s affirmative action ban. The repeal effort is now known as Proposition 16 and will appear on the Nov. 3 ballot. Last month, the UC Regents announced their support for repealing the ban, so they could consider race, gender and ethnicity in admissions and hiring.

Nestor Fletes, 18, is one of the Latino students admitted to UC Berkeley and UC Santa Cruz, but will ultimately attend Cal State LA. He said the CSU campus is closer to home, and he wants to get a job while he figures out what to study. Still, he’s happy that he had the option to consider a UC campus.

“I feel really good about it,” Fletes said. “I know some people in my school were not even able to apply but I at least had the choice to go to a UC. I feel accomplished.”

The UC system also increased the number of admission offers to low-income students from 40% in 2019 to 44%. The number of offers to California freshmen who would be the first in their families to attend college increased from 44% to 45% this year.

“This year reflects our continued commitment to having one-third of our new students comprised of transfer students despite challenges from the pandemic,” said Han Mi Yoon-Wu, UC’s executive director of undergraduate admissions. “We have seen steady increases over the past several years of admitted transfer students and will work hard to continue this upward trend.”

Actual enrollment numbers will be released in December.