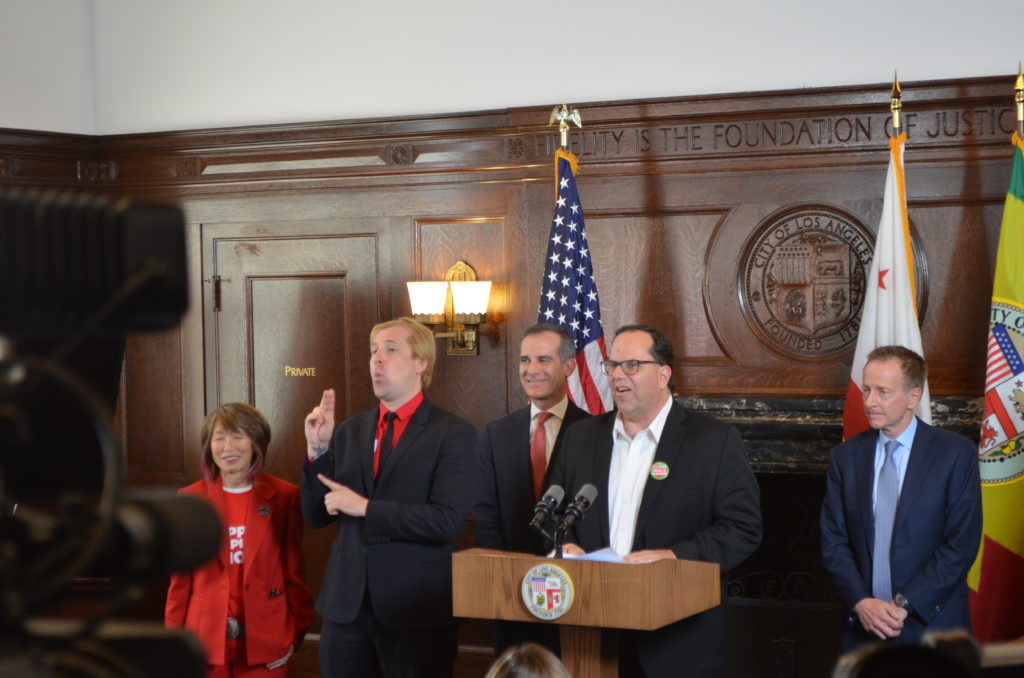 One year after about 30,000 Los Angeles teachers went on strike, the head of United Teachers Los Angeles looks back at the strike, which took place from Jan. 14 to Jan. 22, 2019,  as setting the stage for change. In an interview with EdSource, UTLA President Alex Caputo-Pearl credited the strike for paving the way for more charter school regulation in California and for the election of Jackie Goldberg to the L.A. Unified school board, among other things. Caputo-Pearl also discussed the district’s finances and relations between the union and the district.  To read about the district’s perspective, read this EdSource interview with Superintendent Austin Beutner.

The following is a lightly edited transcript of the conversation.

EdSource: In your view, did the Los Angeles strike spark statewide teacher activism? If so, how?

Caputo-Pearl: We’ve been meeting with Oakland and other urban unions in California for a number of years. So there was some coordination with  (the Oakland teachers’) strike. The main reflections of activism immediately after the L.A. and Oakland strikes was activism around the charter bills (AB 1505, which gave districts more authority to reject charter schools, and AB 1507, which closed a loophole allowing charter schools to operate in districts where they aren’t authorized). There was a major mobilization in Sacramento in May around the charter bills. And then a lot of that activism has funneled into Schools and Communities First, where we’ve got unions in a much better position now, having looked at the L.A. and Oakland strikes and learned from them to build structures within their own unions, to get the signatures for and ultimately get the votes for Schools and Communities First. (EdSource note: Schools and Communities First, also known as the “split-roll” initiative, will likely appear on the November ballot and would amend Proposition 13’s restrictions to raise taxes on commercial and business properties but not homeowners.)

EdSource: Were you surprised that there weren’t more teachers’ strikes across California?

Caputo-Pearl: There were additional strikes in some smaller districts. And certainly the wave has continued nationally. Denver went on strike shortly after we did and West Virginia did another statewide walkout. Of course, there was the Chicago strike. We work very closely with Chicago. The Little Rock strike was a very momentous thing. So the national wave has definitely continued and with strikes being a major part of it.

EdSource: Did the L.A. strike have any other statewide impact in your view?

Caputo-Pearl: There was the signing of AB 1505 and AB 1507. While there was a lot of good work that went into that, there is no question that the L.A. strike drove a lot of that, in that Newsom set up his committee that ultimately led to 1505 and 1507. He set up the committee a week after the strike.

EdSource: Shortly after the strike, UTLA supported Jackie Goldberg in the special election for L.A. Unified’s District 5 board seat, which Goldberg ultimately won in a May runoff. How much do you think the strike helped her campaign, and what impact has she had on the board?

Caputo-Pearl: Jackie herself constantly says that her victory was powered by the strike. And there was a reason that at all of the city rallies that we had, Jackie Goldberg was one of the speakers. So absolutely the strike played a major role in that election. That said, of course, Jackie Goldberg is a very powerful and charismatic and accomplished lawmaker and brings a ton of credibility. So that obviously helped her as well. But yes, the strike absolutely made a difference. And Jackie has made a big difference even in the short time she’s been on the board. She has picked up an issue that we raised four years ago, which was that the L.A. school district was giving charter schools a sweetheart deal when they allowed a charter school to co-locate on a public district campus, but then didn’t use all the space that was allocated to them. They’re supposed to pay a fee for that overallocation. And for years, the district did not collect that, to the tune of millions and millions of dollars left on the table. We did a protest on that, a series of protests on that about four years ago. The district didn’t move on it. Jackie Goldberg has moved on that. It’s now district policy to collect those overallocation fees.

EdSource: How would you assess the state of the district’s finances? Can they afford to follow through on the promises made in the teachers’ contract?

Caputo-Pearl: I’d say two things. One is the same thing we said throughout the strike, which is the district does have money in an oversized reserve right now to create a temporary pathway toward what schools need. But to make that permanent, we do have to get the (split-roll) initiative done to get California out of 43rd place out of 50 states in per-pupil funding. The second thing is, the district did use a significant amount of the reserve to pay for the agreement that came out of the strike, but it also still has substantial reserves. So in terms of the re-opener bargaining that we’re going to be starting this month, where we’re re-opening on three articles (in the agreement) — salary, special education and staffing, with a focus on mental health staffing — the district has money to meet those demands. So our line is pretty much the same. There’s district money to continue to create a temporary pathway, but the permanent pathway is to take on the issue of state funding.

EdSource: During the strike, you said you disagreed with a financial analysis that said the district was at risk of going insolvent by 2021-22 because of deficit spending. Do you still think those warnings are overstated?

Caputo-Pearl: I still look with skepticism on the district’s doomsday predictions. The district is not going to go bankrupt by making a good agreement this year that brings in more mental health support, more special education support and allows educators to have good health care. That said, we should expect more for something as important as public education. We should expect more than just enough to get by in terms of mental health support and special education support and class size reduction. And that’s why Schools and Communities First is so important. There is only a certain amount of time that can pass where a big major urban district like (L.A. Unified) survives when the state is at 43rd out of 50 in per-pupil funding.

EdSource: How would you characterize current relations between the union and the district?