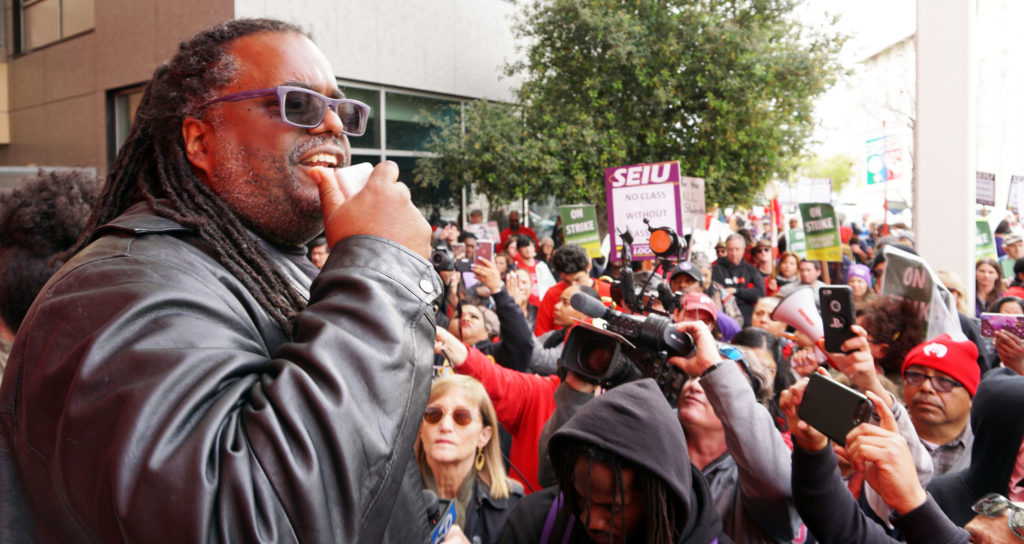 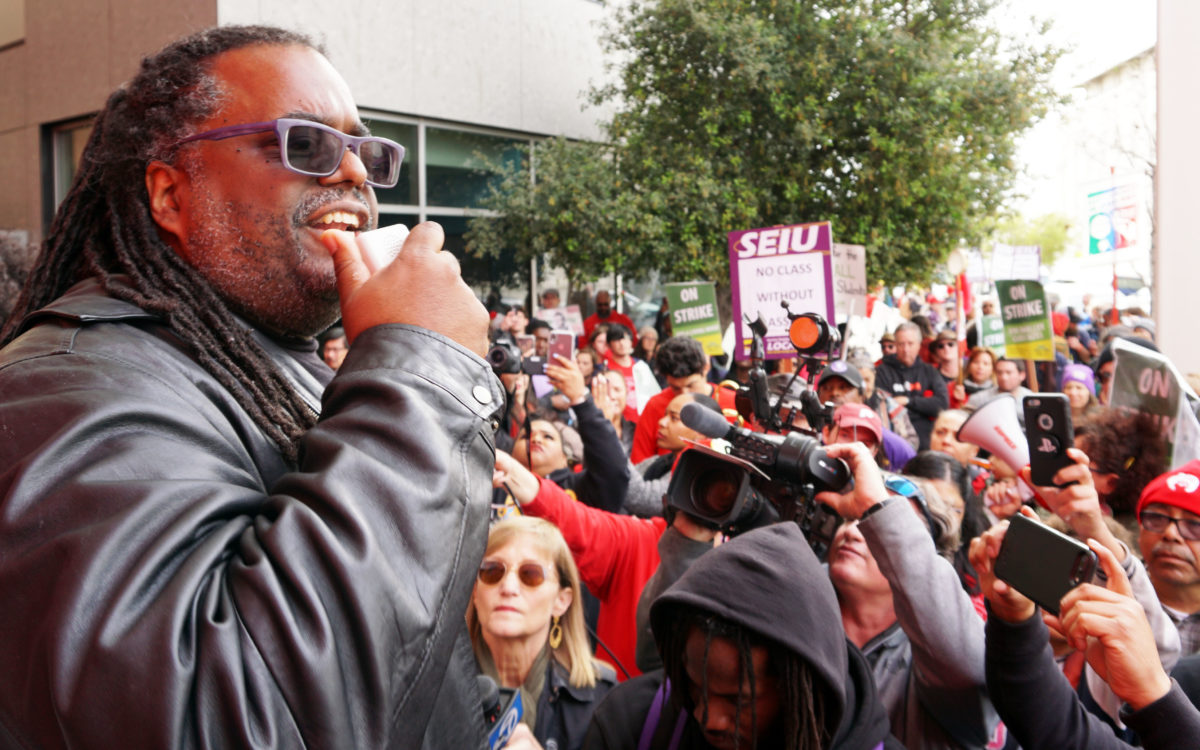 After a weeklong strike, teachers in the Oakland Unified School District have approved a four year agreement with the district that includes an 11 percent salary increase, a 3 percent bonus and addresses teacher demands for smaller classes, more support staff and a five-month moratorium on school closures.

On Sunday afternoon, 58 percent of the nearly 2000 teachers who cast ballots at the Paramount Theater in downtown Oakland voted to approve the contract, but 42 percent, a surprisingly large number, voted against it.   A separate vote on the 3 percent bonus, which essentially will compensate teachers for their lost wages during the strike, was approved by a 64 percent to 36 percent margin.

Teachers returned to their classrooms on Monday although there remains some opposition to the contract terms. The district confirmed that some 30 teachers of a staff of 95 called in sick at Oakland High School. It was not immediately known how many normally call in sick.

“My hope is that this new contract demonstrates our commitment to recruiting and keeping the best teachers in Oakland,” said school superintendent Kyla Johnson-Trammell .”We know that not all members were fully supportive of the contract terms. I  understand the sense of urgency to fix all of our long-standing fiscal and systems issues, but the reality is that it will take a few years to stabilize the district.”

Teachers’ union President Keith Brown, in announcing the agreement, called the strike historic. “We have achieved so much in the seven days of our historic strike in Oakland, in spite of an employer who has said that the sky is falling, that they could not pay for a living wage, they could not pay for lower class sizes,” he said.  “They couldn’t make the investments for needed student support such as nurses, counselors, psychologists and speech therapists.”

The agreement ends a seven-day strike that rallied community support and teacher support from charter schools and other districts.

The union, the Oakland Education Association, described the agreement as including “a win in every major proposal” that the union made.

Board president Aimee Eng said in a district press conference that the agreement is an investment in teachers that “strikes a balance with the fiscal sustainability we need.” Both the union and district thanked State Superintendent of  Public Instruction Tony Thurmond and Assemblymen Rob Bonta, D-Oakland, for playing an integral role in hammering out the deal.

Superintendent Kyla Johnson-Trammell said the strike was “difficult for our city,” but she hoped the agreement “showed teachers how appreciated they are.”

She added: “Now, we hope all of us can focus on healing…We need to be conscientious about how we rebuild trust.”

But some union and community members were not ready to stop picketing outside a planned board meeting where $20.2 million in cuts that would help fund the agreement were to be voted on. As they read details of the deal on their cell phones, some yelled, “Vote no!” and “hold the line!”

Picketers blocked board members from entering the building and forced the cancellation of the meeting, the second time in a week that protesters blocked board action. A new date had not yet been set as of Friday evening. 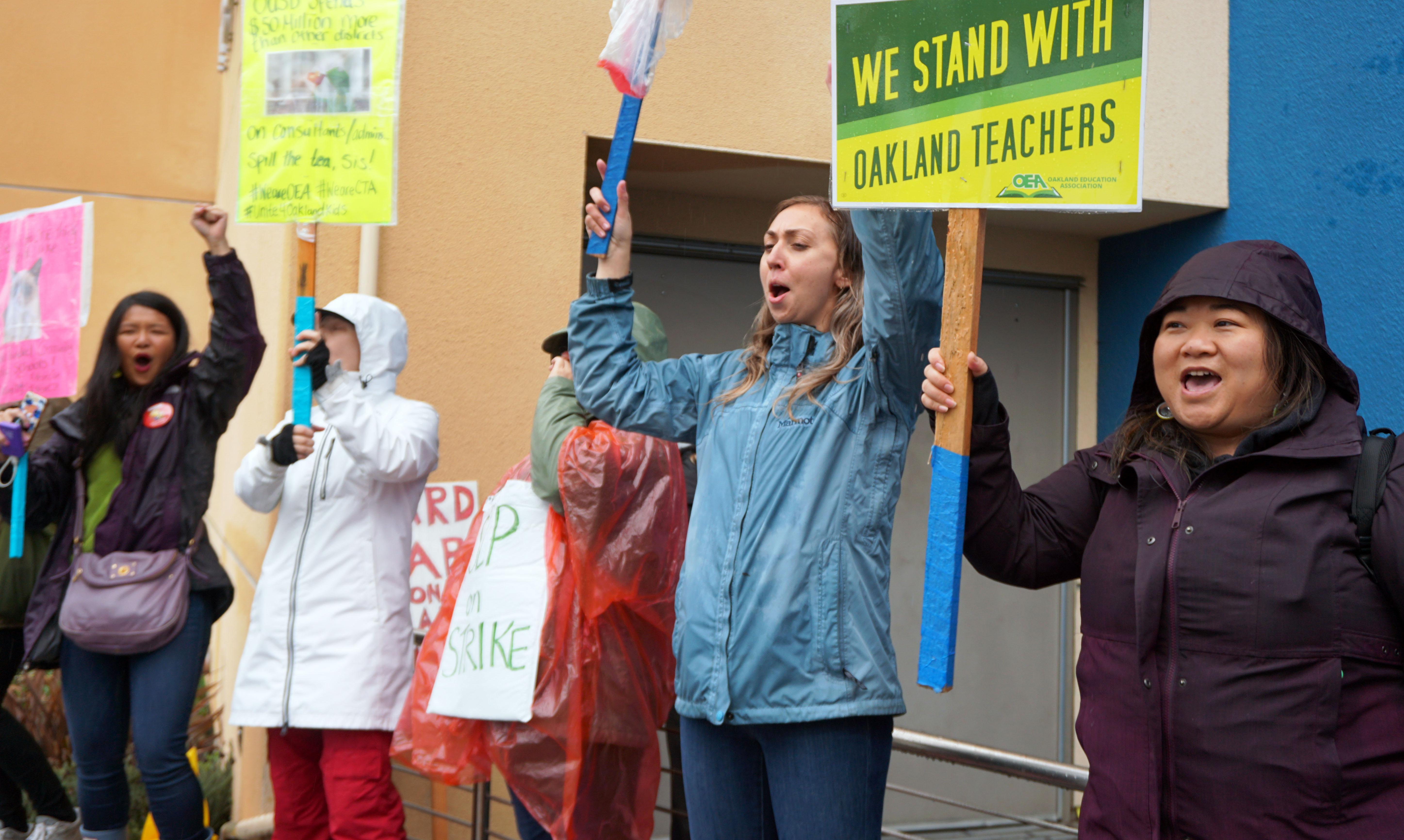 Mark Airgood, union secretary, shouted through a megaphone: “We just need to stand strong, keep the picket lines up and reject this agreement. It is not enough.”

Airgood, in a break with the union’s leadership, said he was especially disappointed in meager class size reductions and in the school closure moratorium, which is actually moot because no schools were planned to be closed in the next five months anyway. Johnson-Trammell confirmed that the district will follow through will its plans to close Roots International Academy at the end of this school year, since the board has already approved that.

And although the district has claimed that most of the budget cuts planned were needed to cover a looming deficit, Johnson-Trammell said both the district’s state trustee and the Alameda County Office of Education were aware of the agreement. She did not express any concerns regarding their willingness to approve it.

She noted that the district ended up agreeing to a 11 percent raise, lower than the 12 percent over three years that the union had demanded.

The bonus is retroactive to cover last year and teachers will receive a 3 percent raise this year, followed by a 2 percent raise in 2020, a 3.5 percent raise Jan. 1, 2021 and a 2.5 percent raise effective June 30, 2021, which would be paid in the 2021-22 fiscal year. Johnson-Trammell said she expected the planned cuts to pay for the contract agreement this year and next year, but did not say whether additional budget cuts would be needed in future years to pay for the raises, noting that the district must look at budget “adjustments” every year.

Each 1 percent pay increase for teachers costs $1.9 million. But since other employees will also get “me too” raises, the total cost for each 1 percent is $3.5 million for a total contract cost of $38.5 million, not including the bonuses and other new expenses related to the agreement.

Thurmond and County Superintendent of Schools Karen Monroe both released statements emphasizing the need for more state funding for education to help districts meet the needs of students and teachers.

Thurmond said he was “committed in the coming years to continually work with districts, the governor and Legislature on identifying new and permanent funding sources to help districts lower class sizes; increase staff; and support students, teachers and parents throughout the entire state.”

Monroe, who must sign off on the agreement, also stressed the importance of getting students back into their classrooms as soon as possible “with teachers who are valued, supported and better compensated for the tremendous work they do.”

She added: “Without a doubt, Oakland has difficult decisions ahead in order to land in a more stable and fiscally healthy place. Reaching this agreement with the Oakland Education Association is a significant step.”

Brown said Eng had agreed to bring forward a resolution seeking a statewide moratorium on charter schools similar to the one passed by the Los Angeles Unified school board after teachers in that district recently went on strike. The board has already adopted Legislative priorities that outline its desire for a cap on new charter schools in fiscally distressed districts such as Oakland.

Johnson-Trammell said the resolution would likely incorporate the same principles already outlined in those priorities.

“The growth of charters, fueled by money and power from outside our community, has caused economic and educational instability to existing district and charter schools,” the letter says. “The continued proliferation of schools is preventing all of our students — both district and charter — from receiving the supports they deserve. That is why we are calling for an immediate stop to charter school growth in Oakland.”

It goes on to say that charter school educators “are particularly concerned that some of our own organizations continue to irresponsibly push for expansion” as the district considers “disruptive school closures.”

Many teachers who signed the letter are part of a network of educators called the Bay Area Charter Organizing Network, which includes both union and non-union charter school teachers from 15 charter schools in Oakland and is part of a statewide group called California Charter Educators United, said Andy Marshall-Buselt, who teaches at Leadership Public Schools, which shares a campus with the district-run Castlemont High.

About 30 percent of students in Oakland attend charter schools. Oakland Unified says that it has too many schools and not enough students to fill them, so it may close or consolidate up to 24 schools in the next five years to save money and reinvest in the remaining schools to improve their quality.

Assemblyman Bonta said in a statement that he has worked with Eng, the broad president, to develop a resolution that will help ensure that the district improves its community involvement “when hard choices about closures or consolidations of schools are being considered.” He said he would continue to work with the union and district ”to expand on this in the months to come.”