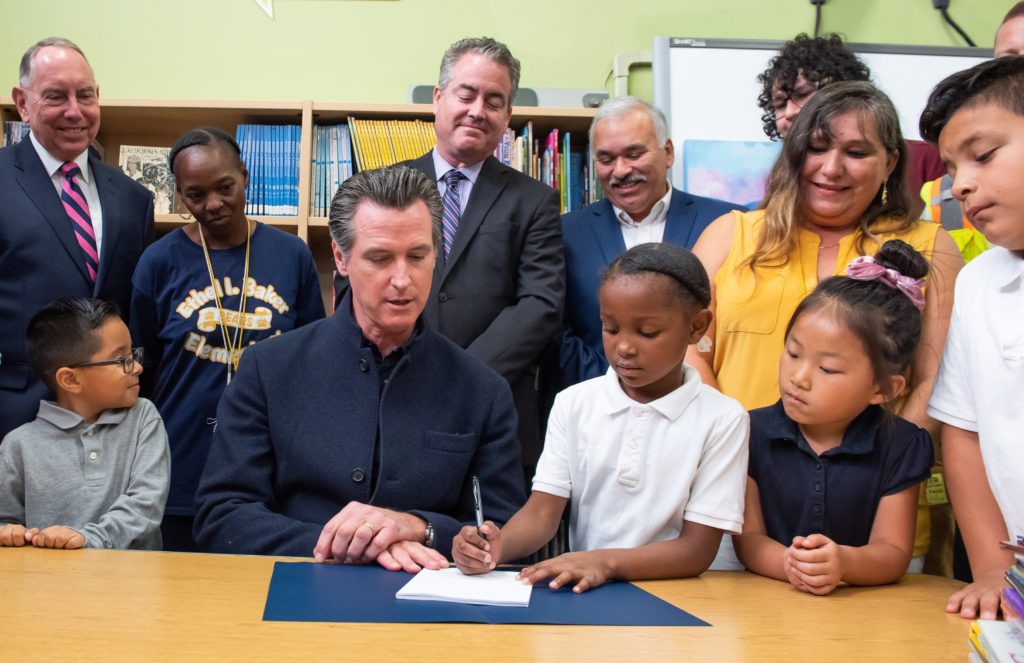 He funded beyond the minimum, struck deals on charter schools and building aid 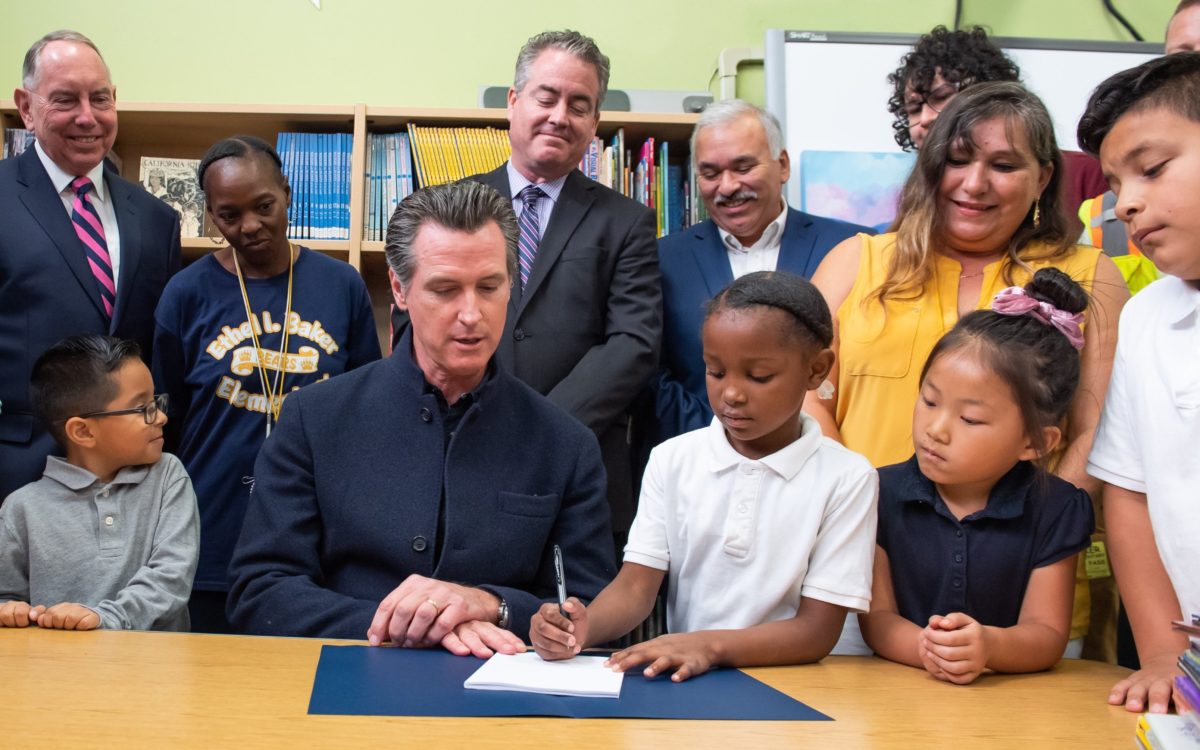 Gavin Newsom wasn’t pressed during his 2018 campaign for governor to be specific about his education goals or how he’d raise taxes for the additional revenue that he agreed schools need. Well-assured of election, he didn’t have to. He faced a weak opponent in Republican John Cox after vanquishing opponents in the primary. Plus, K-12 education wasn’t a central issue in the election.

But in his first year in office, Newsom partially made good on education positions he highlighted on his website and in a questionnaire for EdSource. These include making early education a priority, funding incentives to hire more teachers and creating the framework for a database to track students from pre-K to higher ed. In 2019, he also made decisions that sometimes surprised, and largely pleased, education groups and advocates and that distinguished him from his predecessor, Gov. Jerry Brown. 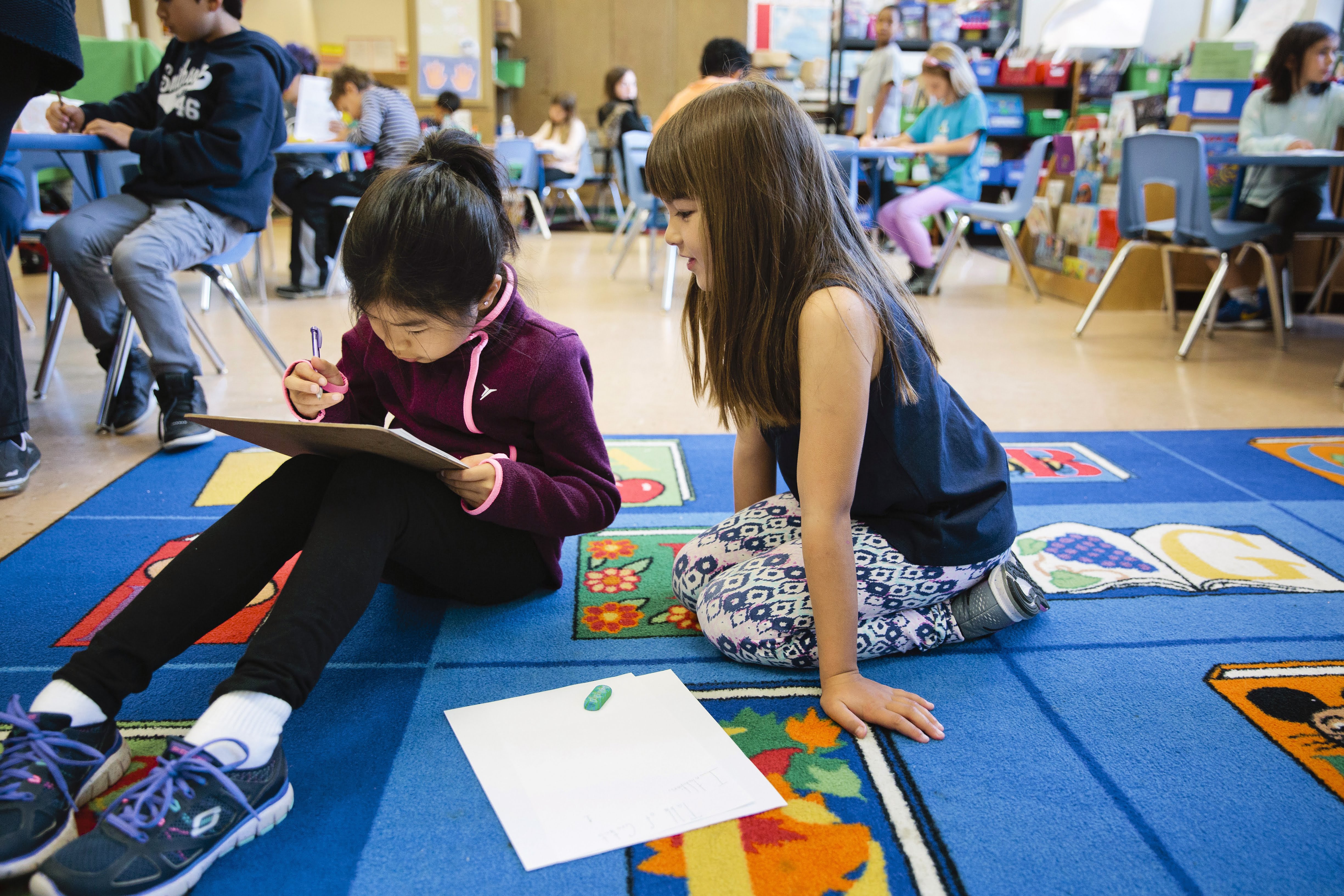 “Following Brown was going to be tough,” said Kevin Gordon, president of Capitol Advisors Group, an education consulting firm in Sacramento, “but if anyone thought a rookie governor would be weaker and more timid, they were sorely mistaken.”

“In education, Newsom established independence from Gov. Brown,” said former Assemblywoman Joan Buchanan, a Democrat from Alamo who chaired the Assembly Education Committee in 2013-14. “He has been what I expected. He has never been afraid to move forward but he also is a businessman who understands the need to balance budgets.”

As Newsom enters his second year in office, here is a look back at some of the commitments he made, key actions he took and some promises still awaiting action.

On his campaign website, Newsom wrote, “If we are serious about closing achievement gaps and income gaps, we must get serious about closing the opportunity gap and that begins with doubling down on the readiness gap by emphasizing prenatal care and the first three years of a child’s life. Gavin will work to address the inequities in our public education system, connect our early childhood, K-12 and higher education systems and develop incentives to attract highly qualified educators.”

Early education: As he had promised, Newsom made child care and early education a priority, committing more than $2 billion, much of it in one-time money. Newsom expanded funding without encroaching on the K-12 budget by using other General Fund dollars.

Data: With a $10 million budget appropriation, Newsom has set in motion what Brown had opposed: the creation of a longitudinal data system linking information on children from infancy through college and into the workforce. It will connect existing data systems so that lawmakers and policy makers can answer fundamental questions, like which early education investments pay off long-term and which community college reforms increase college completion rates.

Teacher shortage: Adding to efforts that Gov. Brown included in his last budget, Newsom included $90 million in scholarships for 4,500 new teachers in high-demand subjects, such as special education, math and science, in low-income districts where they are most needed. That could be a down payment for more funding this year.

Newsom’s first-year budget did not include initiatives to address inequities, other than to direct most new money toward the Local Control Funding Formula, which targets additional funding to districts based on their numbers of low-income, foster and homeless students and English learners.

During the campaign, Newsom had called for more charter school transparency — requiring that charter schools comply with the state’s open meeting, public records and conflict of interest laws. He accomplished that through special legislation as one of his first acts as governor.

In response to the EdSource questionnaire, he said he favored allowing school districts to make a charter school’s potential financial impact “a consideration, but not a deciding factor” in the approval process. That became the most debated change in a substantial rewrite of the law that Newsom’s aides negotiated. Charter advocates and opponents signed on to the compromise while debating whether it went too far or not far enough.

K-12 budget: Newsom repeated on the campaign trail that he viewed funding under Proposition 98, the formula that determines the portion of the state budget dedicated to K-12 and community colleges, a “floor but not a ceiling.” He indirectly went well beyond Prop. 98’s minimum funding in his first budget by directing $3.1 billion from the General Fund for short- and long-term relief for districts’ employee pension contributions.

“The pension relief was a big help for districts,” said John Gray, president of School Services of California, a Sacramento-based consulting firm for districts. “Newsom was unafraid to use the General Fund to reduce districts’ cost pressures.”

School construction bond: As a condition for placing a $15 billion school construction bond on the March 2020 ballot, Newsom insisted that legislators and school districts change the existing system for distributing state building aid from a first-come, first-served basis to a formula that prioritizes help for small and rural districts and provides additional dollars for districts with low tax bases and high-needs families.

Dan Schnur, a professor at the University of Southern California’s Annenberg School of Communications and UC Berkeley’s Institute of Governmental Studies, said Newsom’s unexpected demand “may have been his most outstanding accomplishment in education” in 2019. “This was the first time a governor of either party worked to make sure low-income communities were not pushed to the end of the line” for a share of bond money, he said.

Later start of school: Newsom didn’t let on until he signed it that he favored a bill that would delay the morning start of school. Jaffe of the PTA, which supported the bill, said Newsom showed he was willing to look at the research and listen to pediatricians. Edgar Zazueta, senior director of Policy and Governmental Relations for the Association of California School Administrators, said the signing showed school groups needed to do a better job explaining the challenges in implementing the law. Another important take-away, he said, is that “as opposed to Brown, a commitment to local control is not the end of the conversation for Newsom.”

Key appointment: Brown had nominated author and education scholar Linda Darling-Hammond to chair the California Commission on Teacher Credentialing. Newsom named her president of the State Board of Education to succeed Michael Kirst, another emeritus professor of education at Stanford University. Some conservatives demurred, but Buchanan expressed the common reaction: “It was a great move.”

In his first year, Newsom didn’t make inroads toward that goal. And, short of diverting general-purpose funding for districts, he would probably need significantly more money.

In his EdSource questionnaire responses, Newsom answered “yes” on whether he agrees with the California School Boards Association on setting the goal of raising base funding per student by 60 percent — to well above the national average. Xilonin Cruz-Gonzalez, the association’s new president, said the organization recognizes it will take a multi-step, multi-year process to achieve that goal. This year, it and other school groups will be turning to Newsom to guide the way.