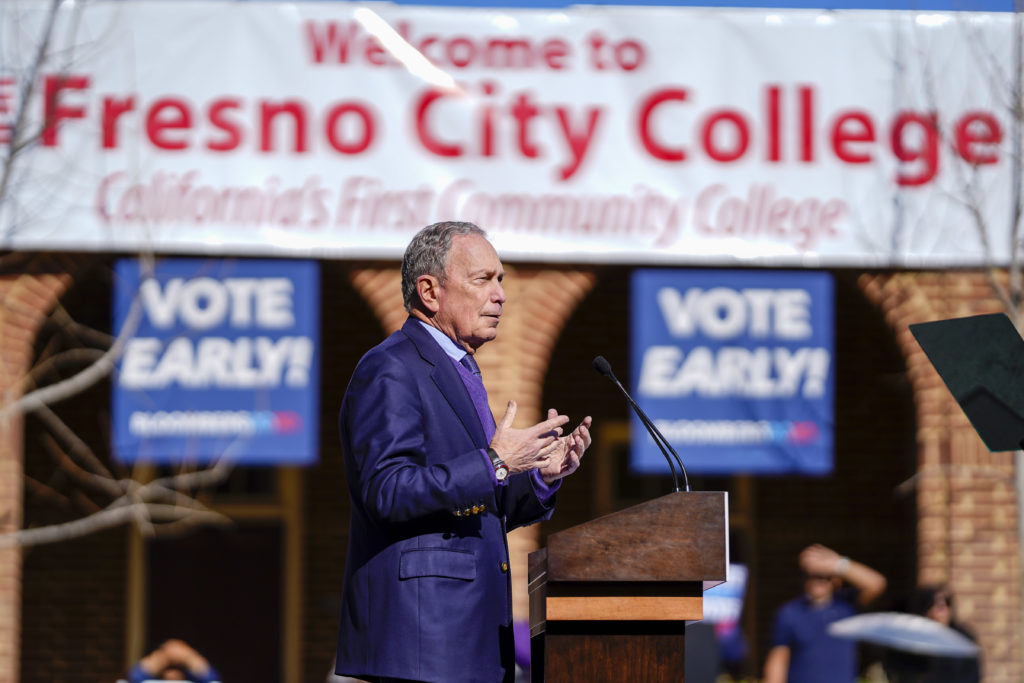 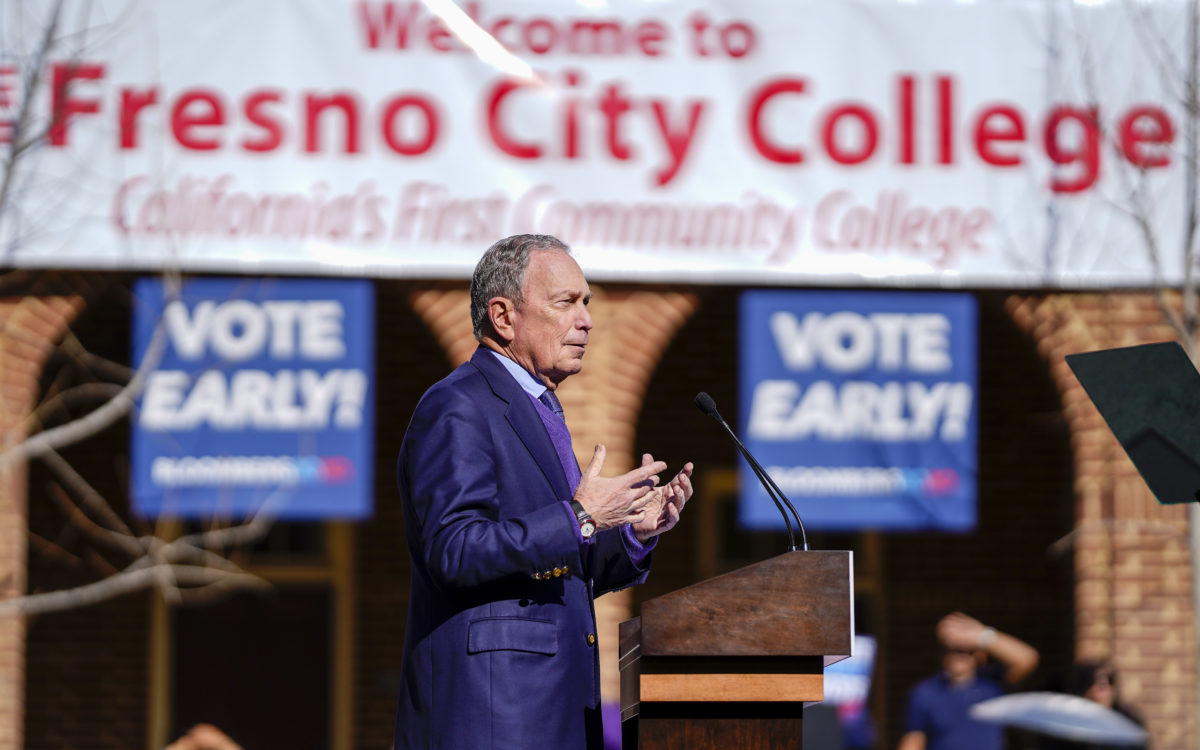 If there is one issue on which Michael Bloomberg and Donald Trump agree, it is on the value of charter schools.

One difference is that Bloomberg does not appear to back using taxpayer funds to underwrite tuition for private and parochial schools, as Trump does. Another is that Bloomberg has actually been able to implement his pro-charter agenda, when he was mayor in New York City, and in backing pro-charter causes and candidates in other states, most notably in California.

He has been one of a cadre of billionaires who have poured money to expand charter school in the state — including Reed Hastings, the founder and CEO of Netflix, L.A. philanthropist and businessman Eli Broad, and Walton family members associated with the Walmart empire.

Bloomberg has also spent heavily on other issues involving children. He has contributed tens of millions of dollars in California to local initiatives related to children’s health, most notably on local initiatives in the Bay Area to levy taxes on soda and to ban vaping products.

But his support of charter schools could present a stumbling block in his ability to attract support from labor unions in his presidential campaign — most especially teachers’ unions which in states like California represent a powerful element of Democratic activism in terms of money and on-the-ground organizing.

Speech to NAACP, Reprinted in Education Next, July 2019,

It is also not an issue Bloomberg gives any indication that he will try to avoid.

“Mike has always supported charter schools, he opened a record number of charter schools as mayor of New York City, and he will champion the issue as president,” Stu Loeser, a campaign spokesman, told Politico last month.

In fact, last July in a speech to the NAACP, and before he had decided to run for president, Bloomberg conceded that while charter schools aren’t the “be all and end all,” and they are only one piece of a larger public education strategy, they offer a “model that can work nationally.”

Among all the Democratic presidential candidates, he is the most zealously pro-charter — and because of the clout he has wielded with his money, either through his foundation or him personally, and as mayor of New York, has actually had the ability to begin to implement his vision.

It’s unlikely Bloomberg will able to avoid the issue in California. Charter schools are currently one of the most hot button issues on the education policy agenda. Gov. Gavin Newsom made signing a charter transparency law one of the first items on his political agenda, and then spent a good deal of time forging a compromise between unions and charter school interests that fell short of the moratorium some local unions and school districts had called for. But the compromise will give school districts greater leeway to deny a charter application than they have had in the past.

And despite the compromise, charter schools are again an issue in the upcoming board elections in Los Angeles Unified, which is still recovering from a teachers’ strike a year ago in which the impact of charter schools on the district’s finances fueled teacher dissatisfaction — and activism.

Just two years ago, Bloomberg contributed $3.5 million to support the Quixotic and eventually unsuccessful gubernatorial campaign of former Los Angeles Mayor Antonio Villaraigosa against then-Lt. Gov. Newsom. Bloomberg funneled the money through an independent expenditure committee created to back Villaraigosa by the advocacy arm of the Charter Schools Association of California.

At least since 2012, he has contributed each year to independent expenditure committees set up by the California Charter Schools Association Advocates. These funds have been used to back candidates for the state Assembly and Senate, as well as local school board races — typically for candidates viewed as most likely to support charter school expansion in the state.

In 2014, he also contributed $500,000 to an independent expenditure committee backing Marshall Tuck in his unsuccessful bid to unseat then-State Superintendent of Public Instruction Tom Torlakson. Tuck, who was formerly president of Green Dot, an L.A.-based charter management organization, was heavily backed by charter advocates.    Since 2016, Bloomberg has also supported the advocacy arm of Go Public Schools, a multi-issue education organization that backs charter schools in Oakland, to the tune of $550,000, according to state election records.

But a small number of local unions — notably United Teachers Los Angeles, the largest local teachers’ union in California, along with teachers’ unions in Oakland and Richmond — have endorsed Bernie Sanders.

Unlike other billionaire backers of charter schools, Bloomberg actually has had a political platform to implement his vision. During his 12 years as mayor of New York City, the New York City schools, under the leadership of Chancellor Joel Klein, whom Bloomberg appointed, charter enrollments soared from 4,442 students in 18 charter schools to 183 schools serving 71,422 students.

Some of those schools ended up being among the highest-performing in the state as measured by test scores aligned with the Common Core standards, Bloomberg pointed out at the time. He continued to underscore that point during his speech last July to the NAACP, which has called for a moratorium on charter school expansion.

In New York City, he said,  “we showed that when charters are granted carefully and overseen rigorously, the results can be incredibly impressive among millions of kids, giving them the opportunity to succeed and pursue their dreams.”

He also was able to get in a barb about Trump’s Secretary of Education Betsy DeVos, another prominent backer of charter schools.

“Some states,” he said, “have done a particularly poor job in holding charters accountable for performance,” singling out Michigan, the home state of Secretary of Education Betsy DeVos.  “That’s because conservatives, including Betsy DeVos, have allowed failing charter schools to continue to operate. And that is wrong, and it hurts children and we should not tolerate it.”

On the campaign trail, Bloomberg has issued detailed plans for early childhood learning, career and technical education, and college access and affordability. But he has yet to publish a separate plan for K-12 public schools, and his website makes no mention of charter schools. Campaign spokeswoman Rachel Nagel told EdSource that Bloomberg will likely release his K-12 plan “over the next few weeks” and “in it he will support the creation of innovative public schools, both district schools and public charter schools.”

For now, he is an outlier on the Democratic campaign trail in terms of his full embrace of charter schools.

Both Sen. Elizabeth Warren and Sanders, for example, have called for an end of federal funding for charter school expansion, among other restrictions on charters.  Former Vice President Joe Biden, generally a charter school supporter, has not spoken much about them but recently said for for-profit charters “siphon off money from our public schools, which are already in enough trouble.”  Pete Buttigieg opposes for-profit charter schools, says there should be “considerably more oversight” of nonprofit ones, and expresses “skepticism” about the value of expanding them at a time when so many district-run schools are underfunded.

When it comes to children, Bloomberg has spent much more in California on causes related to their health than he has on charter schools.

He was by far the biggest backer of the successful efforts to tax soda and other sugary beverages in Oakland and San Francisco in 2017, contributing $18 million to both campaigns, according to Forbes magazine.  He was also a major backer of a similar successful campaign in Berkeley in 2014, which resulted in the first soda tax in the nation.

He also contributed at least $3 million to the successful 2018 proposition in San Francisco to ban flavored tobacco products, intended to curb teenage vaping. It was one of the most comprehensive prohibitions of its kind in the nation. He contributed $7.1 million to defeat an industry-sponsored proposition last year intended to overturn the ban. That made him by far the largest contributor.

But those issues are not as politically salient or as emotional as charter schools have become in Democratic circles, so it is not clear how much mileage Bloomberg will get from his involvement in them, at least in California. In a prescient article written last July, Douglas Harris from the Brookings Institution, a center-left think tank in Washington D.C., argued that if no candidate emerges with a majority of votes prior to the Democratic convention “institutional power players like unions will have an outsized role.”

If the former mayor is still in the race by then, and it comes down to a brokered convention, his support for charter schools will be unlikely to help his bid for the nomination.