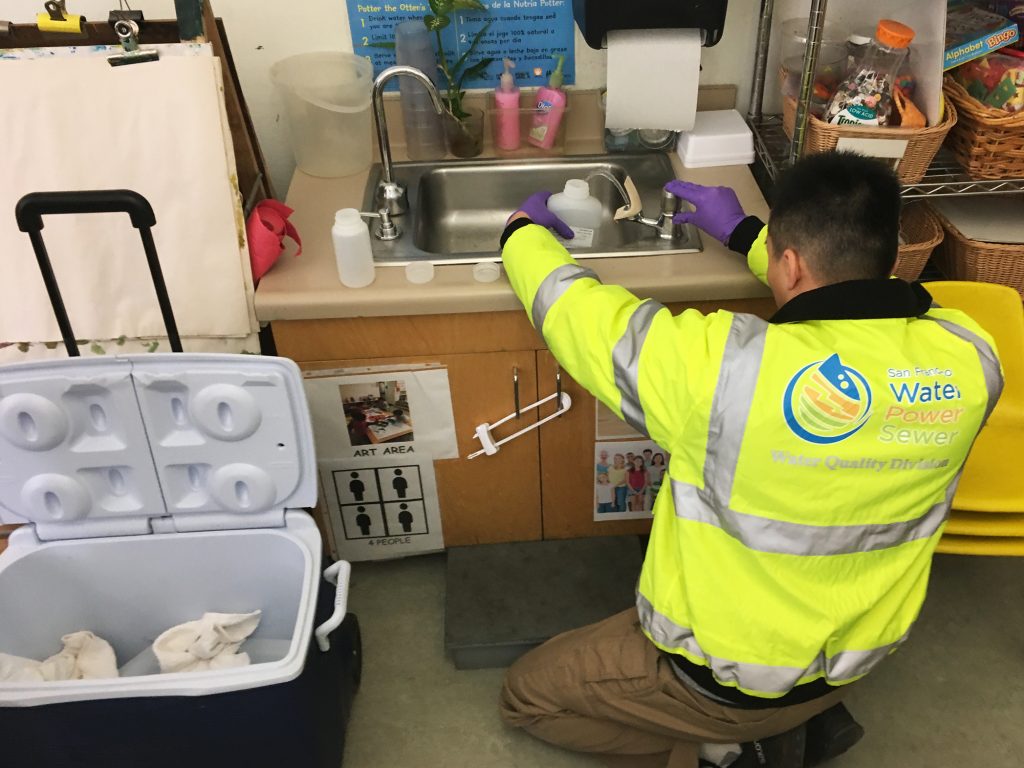 $150 million would be set aside for testing and remediation.

Water Quality Technician Weldon Ng takes a water sample from a classroom sink in San Francisco. Prompted by a state law, schools across California are testing their water for lead.

Water Quality Technician Weldon Ng takes a water sample from a classroom sink in San Francisco. Prompted by a state law, schools across California are testing their water for lead.

The first significant state funding to test and remove lead from drinking water in California’s schools is included in a state construction bond that will appear on the March 2020 ballot if Gov. Gavin Newsom signs the bill that the Legislature passed on Friday.

A year ago, EdSource wrote in depth about the threat that lead in water posed to California’s schoolchildren in  “Tainted Taps: Lead puts California students at risk.” The series included a searchable data base and an interactive map with test results in every school that had been tested up to that point. EdSource will update the data once they are analyzed.

The proposed $15 billion bond for preK-12 and higher education would set aside $150 million in priority funding to test for lead and replace water fountains and other sources with high levels of it. Schools that require more extensive lead removal efforts, such as replacing a contaminated water line, could seek supplemental funding of up to 10 percent of the value of a school renovation project covered by the bond. The state would pick up 60 percent of the cost.

Until now, “there has never been a comprehensive plan for lead remediation, only for identifying the problem,” said Eric Bakke, legislative advocate for the California School Boards Association, who pushed for including the money in the original version of Assembly Bill 48, authored by Assemblyman Patrick O’Donnell, D-Long Beach. “The issue has been on my radar for years.”

Both houses of the Legislature passed the bill on Friday, the final day before adjourning for the year, following a week-long negotiation with Newsom’s staff. Newsom has until Oct. 13 to sign it.

Ingesting even small amounts of lead can stunt children’s brain development, lower IQ and put children at greater risk for learning disabilities, among other problems, according to the Centers for Disease Control and Prevention. Lead enters water from corroded pipes, fountainheads, faucets and other plumbing fixtures. Lead also poses an environmental threat in the soil, abandoned industrial buildings and old residential construction, particularly in low-income communities.

Bakke said that he expects the dedicated $150 million and the added ability to use modernization funding should be sufficient to remove lead in every school water source, based on the current state and federal lead limit of a maximum of 15 parts per billion, set by the U.S. Environmental Protection Agency.

Physicians and health advocates agree that level may be too high, as lead levels below the state standard can post a serious health hazard. Some school districts, including Oakland Unified, San Diego Unified and recently Los Angeles Unified, have set a target of 5 parts per billion — the federal limit for producers of bottled water. Stating there is no safe level of lead in water, the American Academy of Pediatrics recommends no more than 1 part per billion. Berkeley Unified has adopted that standard. Ensuring that lead doesn’t exceed that level would require installing and regularly replacing filters on every tap every six months, Bakke said.

“We know there is no safe lead level. Schools ought to work to remove that source of lead for these kids,” Dr. Jennifer Lowry, chair of the American Academy of Pediatrics’ Council on Environmental Health, told EdSource in its 2018 series “Tainted Taps: Lead puts California students at risk.”

O’Donnell’s original version of AB 48 called for two bonds: the first one in March 2020 followed by a second bond in 2022. Bakke said he envisioned using money in the second bond to cover lead remediation down to 5 parts per billion. The new version of AB 48 funds only one bond, although Bakke said that he is confident that the Newsom administration supports moving toward a 5-parts-per-billion limit in schools.

However, H.D. Palmer, spokesman for the Department of Finance, which participated in the negotiations over AB 48, said last week he was not aware of any discussions over revising the lead limit, and the administration has made no commitment beyond what’s in AB 48.

Two years ago, the Legislature passed a law requiring the testing by July 1, 2019 of up to five outlets — but not every fixture — in all schools built before 2010. Water utilities must do the tests for free, with districts responsible for repairs, although public schools in low-income communities could apply for assistance through a $9.5 million state grant program. The current law requires only one round of testing; other states require continual testing at intervals ranging from annually to every six years.

Lazear Charter Academy in Oakland, Nimitz Middle School in Huntington Park, near Los Angeles and Marjorie H. Tobias Elementary in Daly City reported lead levels of more than 1,000 parts per billion. Officials there attributed the high counts to fixtures that had been shut down for weeks or months, allowing lead to accumulate in the stagnant water.