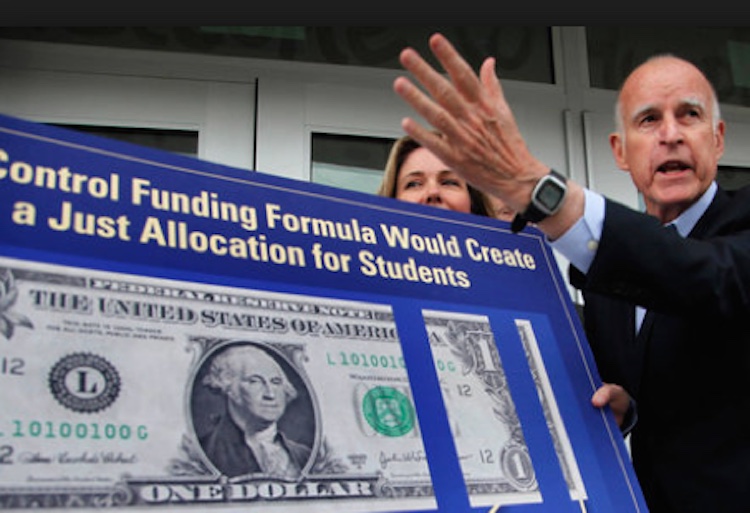 When Gov. Jerry Brown leaves office he will leave behind a set of sweeping education reforms that occurred during his governorship, representing what many education leaders consider the most extensive shakeup of California’s K-12 public education system over any comparable period in the state’s history.

There is a broad consensus that Brown’s most important contribution to education is the Local Control Funding Formula, the landmark school finance reform law that he muscled through the Legislature in 2013.

The law was introduced to replace what almost everyone agreed was an irrational and incoherent system of funding cobbled together over four decades. He eliminated dozens of so-called “categorical funds” — funds earmarked for special programs and purposes ranging from dropout prevention to buying textbooks — that added to districts’ bookkeeping nightmares and hamstrung them in spending their funds.

Perspectives on Gov. Brown’s major contributions to education — and what is yet be done

Brown did not achieve these results alone. Many of the ideas came from a close set of advisers, such as Michael Kirst, the Stanford University professor and longtime president of the State Board of Education, and Sue Burr, a current board member. The board, whose members Brown appointed, and the California Department of Education were crucial to turning Brown’s core ideas into actual policies that could be implemented in nearly 10,000 schools serving over 6 million children in the most diverse state in the nation.

But it is impossible to imagine these reforms happening without Brown’s unique philosophy of education rooted in his Catholic education, including training at a Jesuit seminary, and the drive he brought to push through a series of difficult and politically fraught reforms.

As a result of the law, school districts now all get a base amount of state funds. In addition, every school district gets additional funds — so-called supplemental and concentration funds — based on the number of low-income students, English learners, foster and homeless children it serves, and on the view that it costs more to educate these students.

As its name implies, the law also devolves greater powers to local districts to decide how to spend those extra dollars. It mandates that all key interest groups — from school employees to students and parents — be involved in the decision-making process.

John Affeldt, managing attorney of Public Advocates, a public interest law firm, called the Local Control Funding Formula Brown’s “crowning legislative accomplishment.” Because of it, he said, “California now has one of the nation’s most progressive school funding formulas and a new focus on both equity and community engagement in local decision-making.”

Ryan Smith, CEO of the Partnership for Los Angeles Schools, which manages 10 public schools, called it a “tectonic shift in fiscal policy that shifted the education equity discussion from talk to action.”

Similarly, Carl Cohn, who served on the State Board of Education for several years, said the new funding formula “successfully provided major new resources for historically underserved students without a protracted legal battle, and reminded everyone that if those same students are going to be rescued, it will be done by those closest to them at the local level, not by state capitals or the federal government.”

John Rogers, director of UCLA’s Institute for Democracy, Education and Access, said simply, “Brown has overseen an unprecedented expansion in K-12 funding that has used equity as its core distributional principle. I call that redemption.”

At the heart of the reform is a requirement that districts draw up a Local Control and Accountability Plan, or LCAP, in which districts lay out their goals for the coming year and explain how they will target state funds for their low-income students and other high-needs children.

Instead of the old Academic Performance Index, a single number based almost entirely on standardized test scores, California came up with a completely new and more multi-dimensional way of showing how well or poorly a school or district is doing.

Parents and others can now consult a multi-colored “dashboard” — officially known as the California School Dashboard — to see how their schools and districts are doing on multiple measures. It uses not only test scores but other indicators, such as suspension and graduation rates and whether students are being prepared for college and the workplace.

The reforms also signaled a radical departure from the top-down punitive mindset of California’s Public School Accountability Act of 1999 and the 2002 federal No Child Left Behind law to one in which the state provides support in a variety of ways to help districts improve, rather than punishing or stigmatizing them for failure.

A key element of the reform strategy was to give new powers to county offices of education to help school districts improve. The state even created a new agency — the California Collaborative for Educational Excellence — to implement this “support” mindset.

On the curriculum side, Brown also backed the introduction of the Common Core standards in English and math, the most significant curriculum reform in decades, and allocated billions of dollars to support its successful implementation. California also was a leader in adopting new science standards, the Next Generation Science Standards, which are still being rolled out across the state.

Despite his skepticism of testing, Brown went along with administering the Common Core-aligned Smarter Balanced assessments in English and math, which 3.2 million California students take each spring. These tests represented a radical departure from the old California Standards Tests, which were essentially pencil-and-paper multiple choice tests. The Smarter Balanced tests are taken online and are “computer adaptive,” which means that students get easier or more difficult questions depending on whether they answer a preceding question correctly or incorrectly.

Rolling out these tests — and all the other reforms — was a massive and complex task in a state with 1 in 8 of the nation’s public school students. After some initial technical problems, administration of the tests has proceeded relatively smoothly. Remarkably, unlike many other states, there has been very little opposition from teachers or parents to the tests.

Along the way, Brown clashed with both the Obama administration and later the Trump administration, who tried to get California to conform to federal regulations in ways that would have undermined California’s own reforms. California eventually prevailed, with its reforms intact.

In a huge victory, Brown was also able to convince California voters to approve Prop. 30 in 2012, a temporary tax increase hat resulted in billions more dollars for schools and community colleges, mainly through increased taxes on high-income earners in California and a 1/4 cent sales tax. It was the first major tax increase that voters had approved since the tax cutting Prop. 13 in 1978 that plunged California into the lower ranks of state spending on education.

Although Brown was neutral on Prop. 55 in 2016, the successor to Prop. 30, voters approved extending the  higher income tax.  As a result of these new revenues, along with the state’s drastically improved economy, the average amount spent on each student in California schools has increased during Brown’s term — from $8,382 in 2011-12 to $11,548 in 2016-17, the most recent figures available.

The big question now is whether these reforms will have their desired effect. There are some promising signs of improvement.

Graduation rates have improved. Suspensions rates have declined dramatically. Math and reading scores of California students on the National Assessment of Educational Program, or NAEP — often referred to as the “nation’s report card” — are improving at an above-average rate. More students are qualifying for admission to the University of California and the California State University.

Perhaps most significantly, research by Rucker Johnson of UC Berkeley and Sean Tanner of the Learning Policy Institute found that every additional $1,000 per student a district received in funding through the Local Control Funding Formula resulted in the equivalent of approximately seven more months of learning. Because math scores increased more among low-income children than all children, if those improvements are sustained over time they would help narrow the achievement gaps between low-income and higher-income students, the researchers found.

At the same time, the promise of Brown’s reforms has not been fully realized.

Achievement gaps, at least as measured by the Smarter Balanced test results, are still substantial, and among some subgroups have actually widened. On average, less than half of California students met or exceeded the standards in both reading and math in the latest round of testing in 2018.

Central to the concept of local control is whether county offices of education will have the capacity to provide the necessary support to schools that the framers of California’s reforms envisioned. Carl Cohn, who stepped down as director of the California Collaborative for Educational Excellence last summer, said “the major unaddressed issue is whether the counties will be able to shed their historical compliance-driven approach and emerge as talent centers that districts will see as their first choice for help and support.”

Under Brown’s watch, California has begun to narrow the gap in state spending on students compared to other states. According to the most favorable calculation, California ranks 32nd in spending.

Michael Kirst, who will leave the state board at its meeting on Jan. 9 in Sacramento, worries about whether schools and teachers have the capacity to ensure that the Common Core and other academic standards instituted during Brown’s governorship are effective in improving instruction and education outcomes. “I think that’s really the job of the next administration,” he said.

Ultimately, the success of the Brown era of reform will be measured by the success of the Local Control Funding Formula. “Part of the LCFF’s promise was to ensure that dollars intended for disadvantaged students are used to provide additional services for these students,” said Jonathan Kaplan, a senior policy analyst for education at the California Budget and Policy Center. “The major unfinished business is defining the state’s role in ensuring that this promise is kept.”