Small rise in California’s math and reading scores in 2018 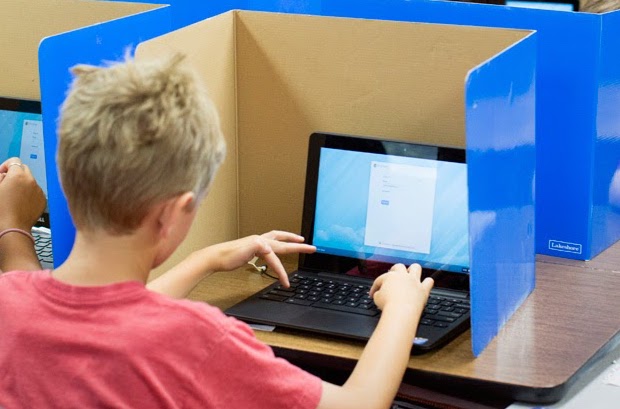 In 4th year of testing, 11th graders do poorly while 3rd and 4th graders continue gains

Scores on the state’s standardized tests rose slightly overall in 2018, increasing in all grades but 11th, the only high school grade to take the test, where a big drop countered the big growth in early elementary grades. In English language arts, about half of students overall met or exceeded the standards — the equivalent of proficiency — while 39 percent met or exceeded standards in math.

Find your district's and school's results

EdSource has made it quick and easy to search for a school’s or a district’s 2018 Smarter Balanced scores — and how much they rose or fell from last year. Go here for the database and here for statewide results.

The state released the results of the fourth year of tests on Tuesday. Students took the tests last spring. Test scores are among the indicators of school and district performance on the California School Dashboard, which will be updated with the 2018 Smarter Balanced results later this year. 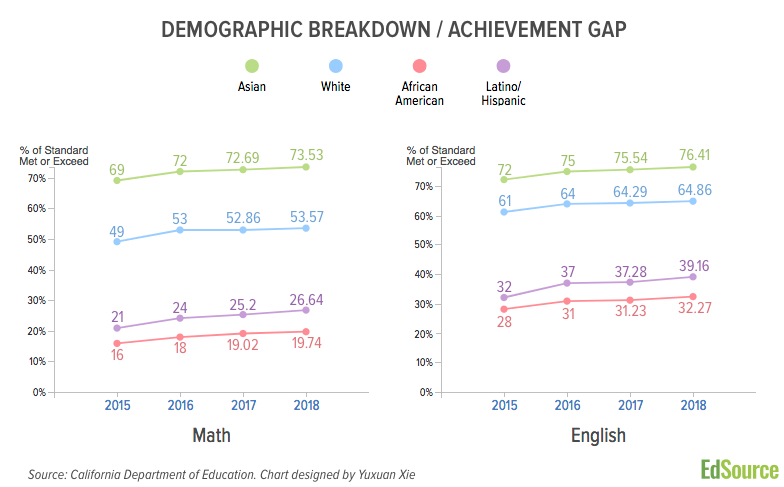 This year’s results drew differing interpretations. Michael Kirst, president of the State Board of Education, and Edward Haertel, professor emeritus at the Stanford Graduate School of Education and a specialist in assessment, found nearly double-digit four-year gains in 3rd and 4th grades particularly encouraging (see graphic). These students were instructed in the Common Core standards in math and reading since they started school, Haertel wrote in an email, and benefited from the training their teachers received. The switch to Common Core happened after many middle and high school students were past the early grades.

“That our younger learners who have experienced standard-aligned instruction since kindergarten are improving faster is encouraging,” Kirst said in a statement.

But Arun Ramanathan, executive director of Pivot Learning Partners, a nonprofit organization that works with schools on improvement strategies, said it was “distressing” that students’ scores in general have flattened since the second-year bump in upper elementary and middle school. He attributed this to poor implementation of Common Core standards and the selection of low-quality materials.

“The state has to look at whether the implementation strategies have been right,” he said. “We know more than five years ago about the effective levers of change.” 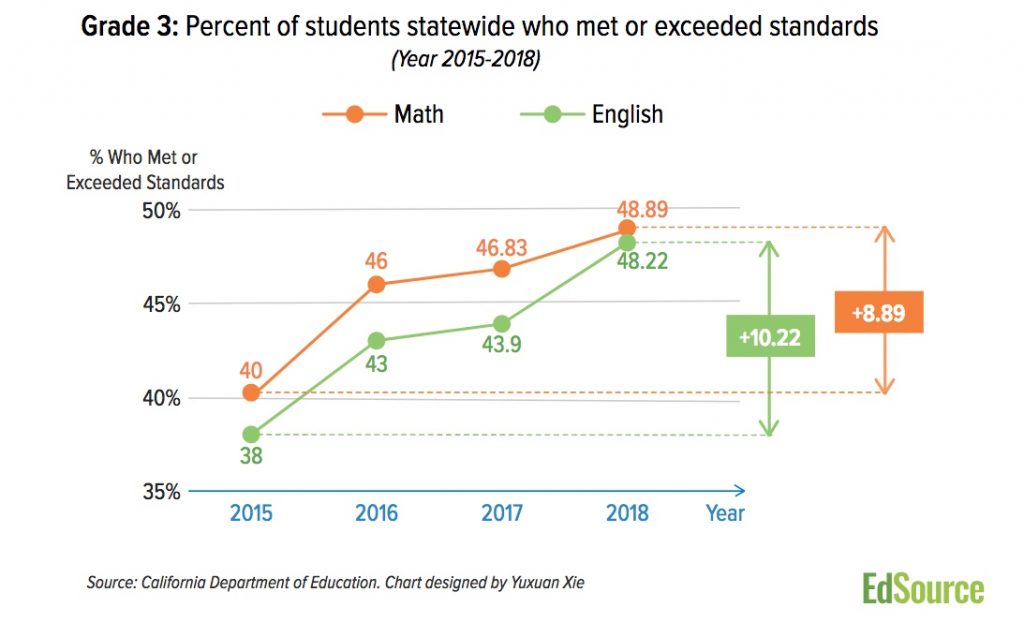 No one knows precisely why, but both Ramanathan and Haertel acknowledge a lack of motivation could be a factor. High school juniors are focused on tests that matter to them for getting into college: Advanced Placement, SAT and ACT. Results on Smarter Balanced count only as school and district accountability measures. Dozens of districts now offer SAT or ACT for free during the school day and they support replacing Smarter Balanced with those tests in 11th grade, though Gov. Jerry Brown last week vetoed a bill that would to let them do that.

Jeanette Conchas, a guidance counselor at Dominguez High in Compton Unified, which offers free SAT and ACT to juniors and seniors, said the school has tried pep rallies and efforts to instill pride in beating the scores of the previous year’s juniors, with little success. She estimates only 40 percent of students “at most take the test seriously.”

“We made sure they all finish the test,” she said, but some students finish a four-plus hour test in an hour.

The state said that for the fourth straight year, fewer than 1 percent of students in all grades did not take the Smarter Balanced tests due to a parental exemption — a figure that is lower than in other states. But there were a few notable exceptions, particularly in 11th grade. In Palo Alto Unified, only 39 percent of students took the English language arts test and 34 percent took the math test.

A quick survey of Sacramento County districts indicated small upticks in scores in some of the larger districts. One that did better than average is 32,000-student Twin Rivers Unified, where 85 percent of students are from low-income families. While still below the state average in achievement, the number of students at or above standards rose 4.1 percentage points in English language arts and 2.7 percentage points in math this year.

“Last year we were able to provide some really targeted support to our schools in math,” said Lori Grace, Twin Rivers associate superintendent of educational services.

The school district hired a Southern California company in May 2017 to supply supplemental materials, coaching and professional development for kindergarten through 8th-grade math teachers at 34 schools. The coaches worked with teachers every six weeks, trained administrators and held parent information nights, she said.

In its press release on the Smarter Balanced scores, the California Department of Education cited several districts with success stories, including Brawley Union High School District in Imperial County, which requires writing every day in every class. Earlier this year, EdSource reporter Theresa Harrington explained the program.

Since its adoption five years ago, the Local Control Funding Formula has targeted low-income and English learners with extra funding: 20 percent additional per student and more to districts with high concentrations of those students. The funding formula also shifted responsibilities for decision-making to local districts, including implementation of new academic standards.

One of the studies to examine the rollout of the standards in the recently released Getting Down to Facts project found encouraging signs from teachers and principals whom researchers interviewed. “There were strong signals from teachers in high poverty schools that they were seeing improvement” in teaching and in training in the standards, said Susan Moffitt, a political science professor at Brown University, the lead researcher. Considering the “sea change” that California has simultaneously undertaken with the Common Core and the funding formula, big improvement could take a decade, she said. “We see a little improvement as remarkable,” she said.

Bill Lucia, president and CEO of the advocacy nonprofit EdVoice, drew the opposite conclusion. “The Local Control Funding Formula has brought our schools over $200 billion since it was passed four years ago, and all we have to show for it is a one-point increase in student achievement. There is no excuse for such abysmal outcomes,” he said in a statement. 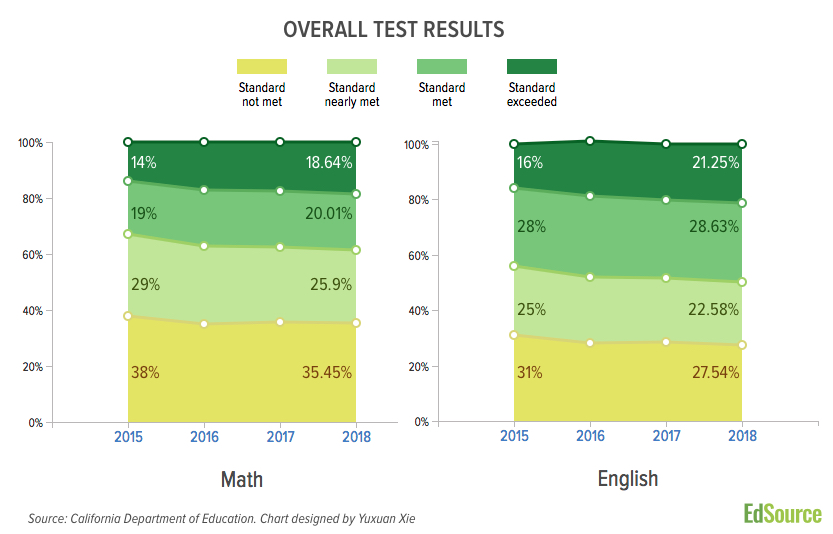 Most states have switched from the way California  measures  yearly progress in testing, which compares the percentage of students in a school or district who scored proficient with the percentage of proficient students in the same grade the year before. That method doesn’t take into account students who have made considerable improvement but didn’t reach proficiency nor does it credit  students who continued to progress beyond the point of proficiency. A better way is to track the annual growth in scores by all students as they proceed through years of school. The State Board of Education plans to switch once it agrees on one of several methods of measuring student growth.