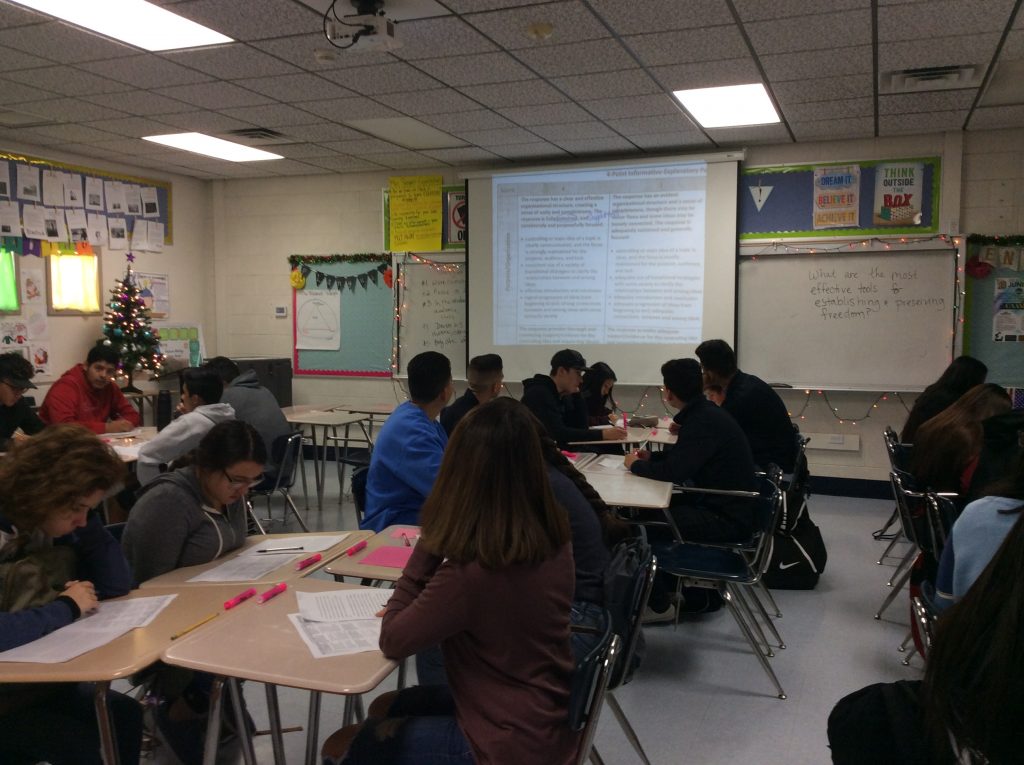 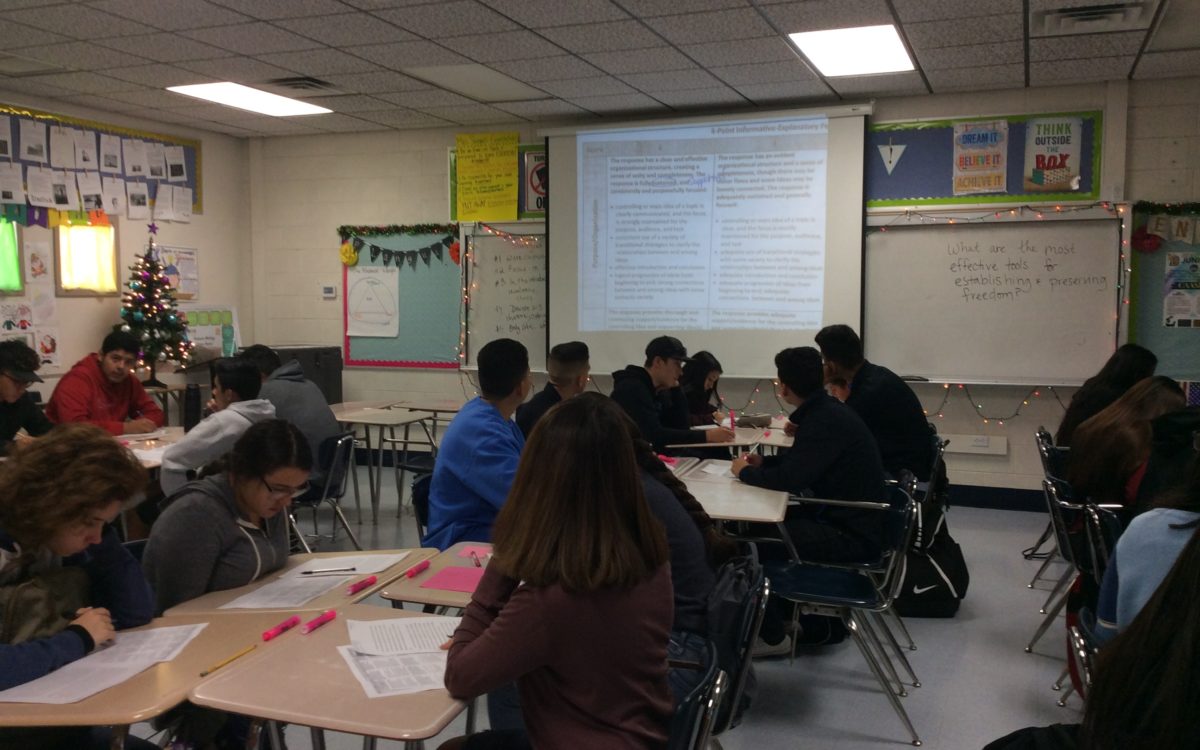 Jesse Sanchez, principal at Brawley Union High School in Imperial County, was alarmed when four years ago he read proposals seniors submitted for voluntary end-of-year projects on topics such as nutrition and community service.

“What I was reading wasn’t making any sense,” said Sanchez, principal of the main high school in Brawley, a town in a remote desert region of California a half–hour drive from the Mexican border. What worried him most was the poor quality of students’ writing, which showed some lacked the ability to make coherent arguments for projects they wanted to do to earn a special graduation sash and a note on their transcripts recording project completion. Sanchez responded by creating a school-wide program that requires all students to write regularly in every class, including P.E., where earlier this year, students wrote about what they had learned regarding muscle anatomy and weight training.

The writing program helped spur a culture shift throughout the Brawley Union High School District, which includes a continuation high school for students who are behind in credits and a community day school for students who have behavior or attendance problems. The culture shift included comprehensive teacher training and staff teambuilding, new classes, and stressing the importance of standardized Smarter Balanced tests in English language arts and math to students.

Over the past three years, the school, which serves about 1,670 students, has seen its scores soar on these tests aligned to the Common Core standards, which high school juniors take each spring.

It’s a significant achievement for the Brawley high school, where 74 percent of students are low-income; 22 percent are learning English; and 10 percent are migrants, who change schools during the year to follow their parents’ work in agriculture or other industries.

What the school has accomplished through its writing initiative — bolstered by districtwide teacher training and teambuilding — could serve as an example for other schools and districts seeking to raise students’ academic performance.

“I think our professional development with the Imperial County Office of Education could be a model for others,” said Bonnie Munguia, the Brawley district’s director of curriculum and instruction. “What is so powerful is that our teachers in all four core areas are receiving professional development from a group of coordinators who talk to each other and help make connections… Students are seeing similar strategies and common language in most of their classes.”

In an EdSource analysis of Smarter Balanced test scores, the school and district went from below the statewide average in English language arts in 2014-15 to just slightly below that average in 2015-16 to scoring above the average last year. In math, the district was among the top 25 with student populations over 250 that showed the highest growth from 2015-16 to 2016-17, but it is still a bit below statewide averages.

The district serves an agricultural community 120 miles east of San Diego and 25 miles north of Mexico. Many of the residents in the area work on ranches, cattle feed and solar farms or in the two nearby federal prisons outside of town. Many teachers and administrators are homegrown alumni who are especially invested in success of their students, who are 89 percent Latino, 9 percent white, 1 percent African-American and 1 percent Asian or other designation.

Driving home the point that district teachers and administrators care about students, staff dressed as superheroes in a “Hope Squad,” asking themselves, “If not us, then who?” as part of a mini-Olympics style competition. The competition was in the high school gym at the end of summer vacation to create excitement for their shared vision of meeting all students’ needs, said Superintendent Simon Canalez, who took over district leadership in 2015, after previously serving as high school principal.

“I thought it was the perfect opportunity for us to focus on coming together as a team and to build collaboration and support for one another,” said Canalez, stressing how far the district has come since it started its teambuilding efforts last year. “We had to open up instructional practice, not just think, ‘It’s me in my classroom by myself.’”

“We’re getting staff buy-in because we know there are so many students who need so much more,” Canalez said. “We know student engagement is the key — building relationships and rapport with students.”

Canalez practices what he preaches by dishing out lunch in the high school cafeteria. After serving lunch on a recent day, Canalez chatted with students.

“Did you get your application in?” he asked Alyssa Bravo, 17, a senior applying to U.C. Davis.

Bravo and other seniors said they appreciate changes the school and district have made to better prepare students for standardized tests, as well as for college and careers. The school-wide “brief writes” program, which requires students in every class to read about a topic and then write about it, has helped them to practice the same kind of writing required on state tests, they said.

This year, teachers assign articles from newspapers, magazines or other sources for students to read related to their classes, which has helped pique students’ interest, said Heidi Gutierrez, 17. For example, she said her culinary arts class read an article about a food safety scare at Chipotle restaurants after a sickness outbreak.

The school is tweaking its writing program each year, based on student and teacher feedback, Sanchez said. All teachers are receiving training in grading writing assignments according to a rubric that requires students to respond to a question by restating the issue, answering the question, citing sources, and using evidence to support conclusions.

English teachers also use a rubric aligned with the state’s Common Core standards, placing extra emphasis on elaborating arguments, said Danielle Seeger, who teaches 11th-grade English. Writing skills, she said, help students to intelligently communicate their ideas, which is “valuable in any field.”

The school’s writing emphasis played a major role in its improved English language arts scores on Smarter Balanced tests, especially in the achievement areas of writing and finding and presenting information. Three years ago, only 6 percent of the school’s students scored above the standard in writing, while 17 percent performed above the “research and inquiry” standards. By last spring, those scores had jumped 28 and 18 percentage points respectively.

To help motivate students to put their best efforts into doing well on the Smarter Balanced tests, educators visit each class of to explain the benefits of meeting or exceeding standards. Those could include the ability to take college-level classes at California State Universities without needing remedial courses, showing mastery in up to two of six subjects required to receive a Golden State Seal Merit Diploma, receiving a blue or gold letterman jacket patch, and meeting “basic skills requirements” for teaching jobs instead of needing to take the California Basic Educational Skills Test, or CBEST.

One of the most popular incentives for students to do well on the state tests is a credit of up to $80 toward costs for prom, “Grad Nite” or yearbooks if they meet or exceed the standards. English teacher Laura MacKenzie said these incentives inspire students to take the tests seriously.

“Now, students are more motivated extrinsically and intrinsically,” she said. “They didn’t care before, so they didn’t try.”

“It’s made me feel more proud of coming to this school.”

Brawley Union has been named to the Advanced Placement District Honor Roll seven years in a row by the College Board, which recognizes districts that show increased course offerings and participation by diverse students, while maintaining or improving AP test scores.

Despite this progress, the school has a way to go.

While it has posted a 97 percent graduation rate for the past three years, only about 1 in 3 students fulfilled the A-G course requirements for admission to the University of California or California State University compared to 45 percent statewide. And although the school has made significant improvement in math, its scores are still slightly below the 11th-grade state average.

The district is continuing teacher training in math and adopted a curriculum that integrates algebra, geometry and other math concepts every year.

Next year, the district will require three years of math for graduation, instead of two. It offers after-school tutoring and added a Financial Algebra class for juniors that covers interest rates and bank accounts and could count toward graduation.

Sanchez said he is proud of his staff and students, who have embraced the writing initiative and other changes. The school’s transformation, he said, was especially apparent when he saw students writing during P.E.

“That gave me goose bumps,” he said.