In race for governor, Newsom and Cox offer competing views on California education 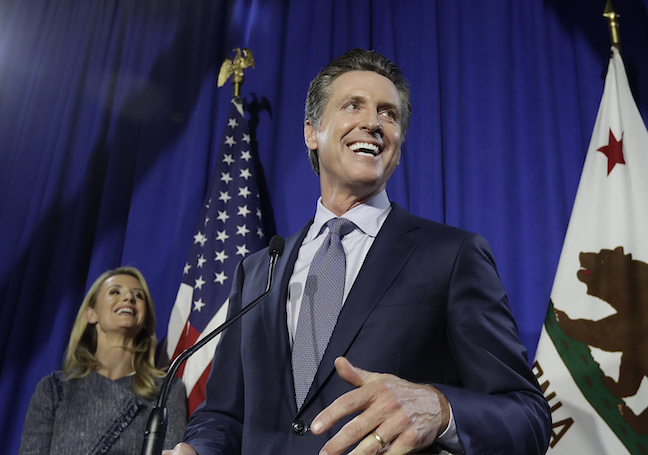 Offering an expansive view of California’s education system that extends from before birth into the workplace, Lt. Gov. Gavin Newsom last night pledged to deliver on what he called a “cradle to college promise for the next generation” along with setting a goal to “end child poverty in California.”

In speech to supporters in San Francisco Tuesday night after coming in first in California’s primary race for governor, he said the state needed to “reinvest” in its public education system, and begin treating teachers “like the heroes that they are.”

He made his remarks after dealing a devastating blow to the gubernatorial bid of former Los Angeles Mayor Antonio Villaraigosa, who was knocked out of the race after coming in third behind both Newsom and GOP businessman John Cox. Newsom received 33.3 percent of the vote, to Cox’s 26.4 percent and Villaraigosa’s 12.9 percent.

Villaraigosa’s poor showing came despite an endorsement by the California Charter Schools Association Advocates, and $23 million in spending to boost his campaign by an independent expenditure committee that the charter schools organization established. Most of those funds came from multi-billionaires with a long history of backing charter schools.

In his speech, Newsom referred to his severe dyslexia that made attending school a torturous experience, and has fundamentally shaped his views on education.

His policy positions differ dramatically from those of Cox, whom he will face in the November general election. Cox rejects the idea that California needs to spend more money on public education. In his speech to supporters last night, he blamed Newsom for the “mismanagement” of the state’s public schools.

“It wasn’t President Trump who gave us one of the most expensive and failing school systems in the country,” he said. “It is criminal to deprive children of the education they deserve.” Raising a theme he brought up repeatedly on the campaign trail, he said extra taxes approved by California voters at the ballot box in recent years are not going into the classroom, but instead are going “into administration and pensions.”

He also argued for the “school choice” agenda similar to what Trump and his Secretary of Education Betsy DeVos are pushing. “We need to give parents and children the education they deserve, and that means more charters, giving parents more choice and encouraging home schooling,” he said.

And instead of increasing funds for higher education and boosting student aid to make it more affordable for students, as Newsom promised, in an April interview with EdSource Cox said colleges should trim their budgets and require professors to teach more classes as a way to reduce costs. “You don’t make things more affordable by handing out loans and subsidies to people,” he said.

In his interview with EdSource, Cox also reversed socially conservative positions on education he took during his brief campaign for president in 2007. Cox said then that he was concerned about a “problem with transvestites who want to be school teachers,” and supported a proposal that would cut off federal funding for schools that “expose our children to homosexual propaganda.”

Newsom outlined his education reform plans in considerable detail in response to a 12-question questionnaire EdSource submitted to him last month. Read his full responses here. Cox did not respond to the questionnaire, but his views on education can be found in this EdSource article.

Newsom said he offered “a new way of thinking about education as a lifelong pursuit.” “Our role begins when babies are still in the womb and it doesn’t end until we’ve done all we can to prepare them for a quality job and successful career,” he wrote.

His plans start with expanded access to prenatal care, developmental screenings and child care, as well as universal pre-kindergarten education for all 4-year-olds. They continue with large increases in K-12 funding — Newsom has thrown his support behind a proposal to raise per-pupil spending by 60 percent. And they extend into higher education, as Newsom calls for increased funding for California’s public colleges and universities, as well as a more generous state financial aid system to make college more affordable for students.

Asked by EdSource how he would fund universal pre-school, for instance, Newsom did not directly answer. He wrote, in part, “I am committed to identifying the resources to ensure a robust early education system.”

Despite Newsom’s extensive and detailed education platform, it is unlikely that education will be a major issue in the campaign itself, said seasoned political observers Bruce Cain, a political science professor and director of the Bill Lane Center for the American West at Stanford University, and Mark DiCamillo, director of the UC Berkeley IGS Poll.

Instead, issues that Cox will raise, such as immigration and the state’s gas tax — and other taxes generally — will be far more prominent, while Newsom will tie Cox to Trump, who is more unpopular in California than almost any other state, said DiCamillo.

But education advocates will be looking closely at Newsom’s positions on education because it is a certainty, barring some political catastrophe, that Newsom will be California’s next governor. In that role, he will have considerable clout to implement his policies in a variety of ways. The governor appoints the 11-person State Board of Education, which is the state’s key policy-making body for education. His annual budget has an impact on how much money goes to schools and how it is spent.

Newsom’s trouncing of Villaraigosa represented a major victory for the California Teachers Association and other teachers unions who had endorsed him. Early in his career Villaraigosa had worked for the United Teachers of Los Angeles, the union representing teachers in the Los Angeles Unified School District. But as state Assembly speaker and during his tenure as L.A. mayor he emerged as a leading critic of the unions. His endorsement by charter school advocates and the millions they poured into the gubernatorial campaign only deepened the hostilities.

“Educators are excited that a champion of our public schools is on the path now to become our next governor,” CTA president Eric Heins said. “Newsom’s clear victory tonight shows that California’s democratic process is not for sale.”

Villaraigosa’s inability to secure a place in the November election “was a huge defeat for charters,” said Kevin Gordon, president of Capitol Advisors, a prominent Sacramento-based education consulting firm. He said the charter groups that organized against Newsom “just emptied the piggy bank on the governor’s race with a big bet. Newsom pledged to be reasonable on charters, but he won’t forget the money raised by the charter school association against him.”

But Sherry Bebitch Jeffe, a professor in USC’s Sol Price School of Public Policy, said it was oversimplifying to say that Newsom’s victory over Villaraigosa was a blow to charter schools, and that there were many other reasons to explain Villaraigosa’s third place showing.

Stanford’s Cain pointed to Villaraigosa having been out of office for a number of years, that his support among Latinos didn’t materialize to any significant degree, and he didn’t draw in independent or moderate Republican voters to support him in the primary.

Despite the financial influence of their supporters, charter schools themselves weren’t an issue in the race, or one most voters cared about, Jeffe, Cain and DiCamillo said,

The silver lining for charter school supporters in yesterday’s election, Jeffe said, is that Marshall Tuck, the candidate they endorsed for state superintendent of public instruction, had come out ahead of Tony Thurmond, who is backed by teachers unions.

Tuck and Thurmond will face each other in the November runoff, and the funds that wealthy charter backers might have spent on Villaraigosa, had he made it onto the ballot, may well now go to Tuck.

Regardless of the outcome of the Tuck-Thurmond race, however, Newsom is overwhelmingly favored to win in November, and the positions he has taken on education now carry enormous weight. “The Republicans are not nominating an Arnold Schwarzenegger,” Cain said. “It looks to me like it’s going to be a runaway race for Gavin.”