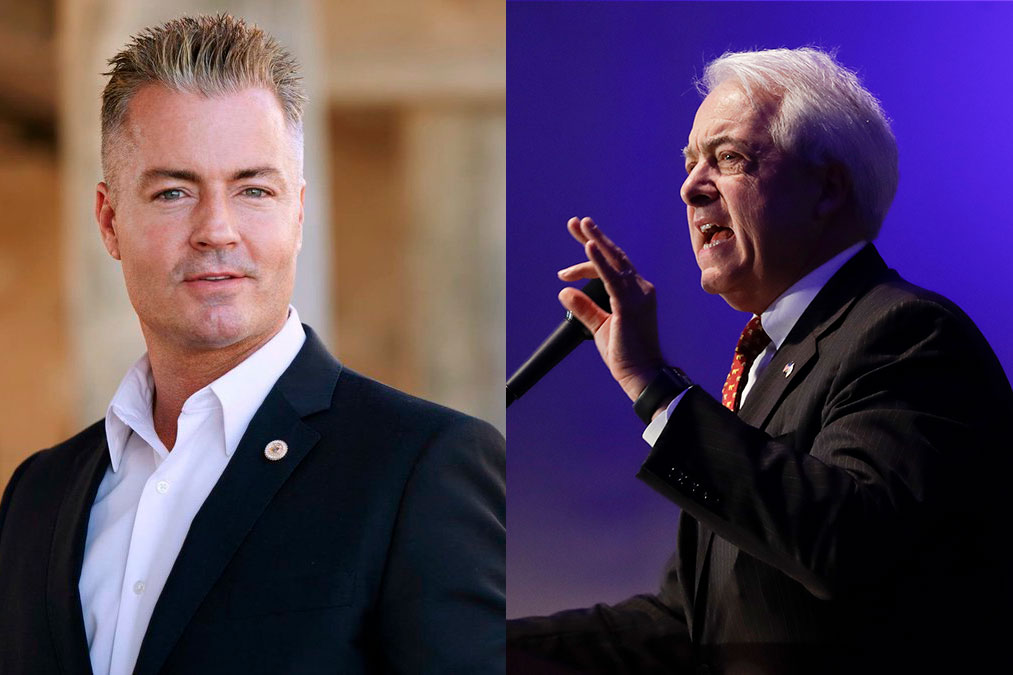 The Republican candidates for governor of California are offering voters vastly different plans for education compared to their Democratic rivals and Gov. Jerry Brown.

John Cox, a businessman from Rancho Santa Fe in San Diego County, has a proposal that he says will reduce the power of teachers’ unions and interest groups. Orange County Assemblyman Travis Allen wants to repeal a state law requiring children in schools to be vaccinated and cut education funding for undocumented students, despite court rulings that have found such restrictions unconstitutional.

The GOP candidates’ path to winning the gubernatorial election — already difficult in a state where registered Democrats outnumber Republicans by more than 3.6 million — may have just become even harder. Neither Cox nor Allen won support from enough delegates at the state GOP convention in San Diego over the weekend to win the party’s nomination.

If neither man finishes in the top two of California’s open primary in June, November’s general election would become a contest between two Democrats.

In interviews with EdSource, both Cox and Allen rejected the idea that California needs to spend more money on public education and pledged strong support for charter schools.

“This state spends upwards of $60 billion a year on education and it’s controlled for the most part by politicians and, frankly, the unions that control in many ways the politicians,” Cox said. “I want to put the parents in charge. I want to make it a consumer effort again.”

Allen said, “It’s time that we bring real reform to California’s schools and break the iron grip of the unions who have failed to adequately educate our children.”

Under California’s unusual primary system, the two top vote-getters in the June 5 primary, regardless of party affiliation, will go on to face each other in the November general election.

The most recent poll in the race, from UC-Berkeley’s Institute of Governmental Studies in April, showed Cox in second place among the six major candidates for governor, with the support of 18 percent of respondents. Allen was a close third at 16 percent. They trailed Democratic front-runner Gavin Newsom, who had 30 percent, but were ahead of Democratic former Los Angeles mayor Antonio Villaraigosa, at 9 percent.

The poll had a sampling error of plus or minus 3.5 to 4.0 percentage points. It was conducted by culling email addresses from voter rolls and sending those likely voters invitations to complete the survey online.

The Republican candidates are trailing their Democratic opponents in fundraising. Campaign finance records show Cox’s campaign raised $1.6 million between Jan. 1 and April 21 of this year and had $1.2 million cash on hand at the end of the filing period. Cox has been his own biggest donor, having spent $4 million of his money on the campaign since he launched it last year.

John Cox: Outsider says he is candidate of change

“John Cox is a businessman — not a politician,” reads the opening line of a biography on his campaign website. That hasn’t been for lack of trying: Cox, an attorney and accountant, ran unsuccessfully for Congress twice in his home state of Illinois and launched a campaign for president that ended before the primaries in 2008. He moved to California a decade ago.

Cox’s plan to get politics out of education – and to reduce the power of lobbyists and unions in California more generally – is called the “Neighborhood Legislature.” It would split the state into legislative districts of 5,000 to 10,000 people, resulting in a legislature with thousands of representatives who Cox says would be less reliant on fundraising and interest groups.

Cox spent another $2.3 million of his own money on a campaign to get the “Neighborhood Legislature” proposal onto the November ballot, but a review found the effort did not collect enough valid signatures to qualify.

Cox said he does not believe California needs to increase education funding.

“They have increased education spending incredibly over the last seven years and it keeps going into administration, it keeps going into pensions. It’s not going into the classrooms and that’s a problem,” Cox said. “No business in the world would keep throwing money into a system where it’s not producing results.”

Cox said there are studies to back up his claims but he did not cite them. He also pointed to a San Francisco Chronicle story about a high school senior in San Francisco Unified who advanced through high school despite failing every course.

He would foster that competition through support for charter schools and by providing parents with vouchers they could use to send children to private schools.

“We need to give parents all over the state — in the inner city, in the barrios — we need to give those parents the same choice of an education that wealthy parents have,” Cox said.

Cox is in sync with President Donald Trump’s education priorities, although he did not vote for Trump in the 2016 election. He says now he approves of the job Trump has done since taking office.

On higher education, Cox said he would not increase funding for the state’s public university systems to avoid tuition hikes. He said he would make college more affordable by cutting spending at colleges, such as by requiring professors to teach more classes.

While his run for president was brief, statements Cox made on education during the campaign have come under criticism as he runs for governor. During the 2007 Values Voters Debate, Cox voiced concerns about “this problem with transvestites who want to be school teachers” and argued that the Republican party should support homeschooling and school choice so “we won’t have to deal with that.”

He also answered “yes” to a question asking if he would support a bill to cut off federal funding to schools that “expose our children to homosexual propaganda.” Cox said he would not give the same answer to that question today and that he no longer views transgender teachers as a problem.

Travis Allen: Accountability, not money, is answer for schools

Allen says a lack of accountability — for students, teachers and schools — is to blame for what he describes as a failing education system in California.

Schools today aren’t sufficiently testing students, Allen says, and as a result, “Too many children are being advanced through the system without a proper education.” His solution: Test students at the start and end of each school year and use those tests to determine whether the student can advance to the next grade.

Allen, a Southern California native and ardent Trump supporter who has represented his coastal Orange County district since 2012, was ranked the most conservative member of the California Assembly in 2016, according to the American Conservative Union. The group found Allen voted with its recommendations 94 percent of the time, the most of any Assembly member, on a range of bills, some of which relate to education.

Those changes — not increased funding — will turn around California schools, Allen said.

“Since Jerry Brown has been in office, (education) spending has increased by over 50 percent, and yet our children are still ranked among the worst in the nation in terms of achievement,” he said. A spokeswoman for Allen cited a 2016 state ranking from the finance site WalletHub that placed California 47th in reading test scores and 46th in math. “The answer isn’t just throwing more money at a broken system. The answer is reforming the system.”

The Supreme Court ruled in 1982 that restrictions to education funding for undocumented students are unconstitutional. California’s Proposition 187, an initiative voters approved in 1994 stripping undocumented immigrants of access to many social services, including public education, was similarly found unconstitutional.

“California taxpayer dollars should only be used for the benefit of California citizens,” Allen said. “When our schools are ranked among the lowest in the nation, it makes absolutely no sense to provide taxpayer dollars for people who are not even in our state legally.”

He called for a tuition freeze at California’s public colleges and universities and said California should audit spending by those systems and change their leadership before providing new higher education funding.

Allen criticized University of California System President Janet Napolitano for a state audit that found she held $175 million in undisclosed reserves and said he would fire Napolitano on “day one” if he were elected governor.

The governor does not have the authority to directly fire the UC System president. That power lies with the Board of Regents, whose members the governor appoints to 12-year terms. There are currently five vacant seats for gubernatorial appointees on the 26-member board, though Brown could fill those positions before his term ends. None of the current governor-appointed Regents’ terms are set to expire in 2019. The governor serves as an ex-officio member with full voting rights.

Allen dismissed any suggestion that his standing is being affected by a closed inquiry into his conduct in 2013 as a state assemblyman.

Allen was among seven state lawmakers named in confidential documents describing allegations of sexual harassment. The Legislature released the documents in February under public pressure, according to the Mercury News, which reported that one woman complained about Allen squeezing her shoulders and being “unnecessarily close.” Another said he “petted” her hand. Allen was counselled in 2013 and the matter was closed.

Allen has denied that his conduct was inappropriate and said he does not believe the allegations are negatively affecting his campaign. He said his behavior “could never been construed as anything other than friendliness.”