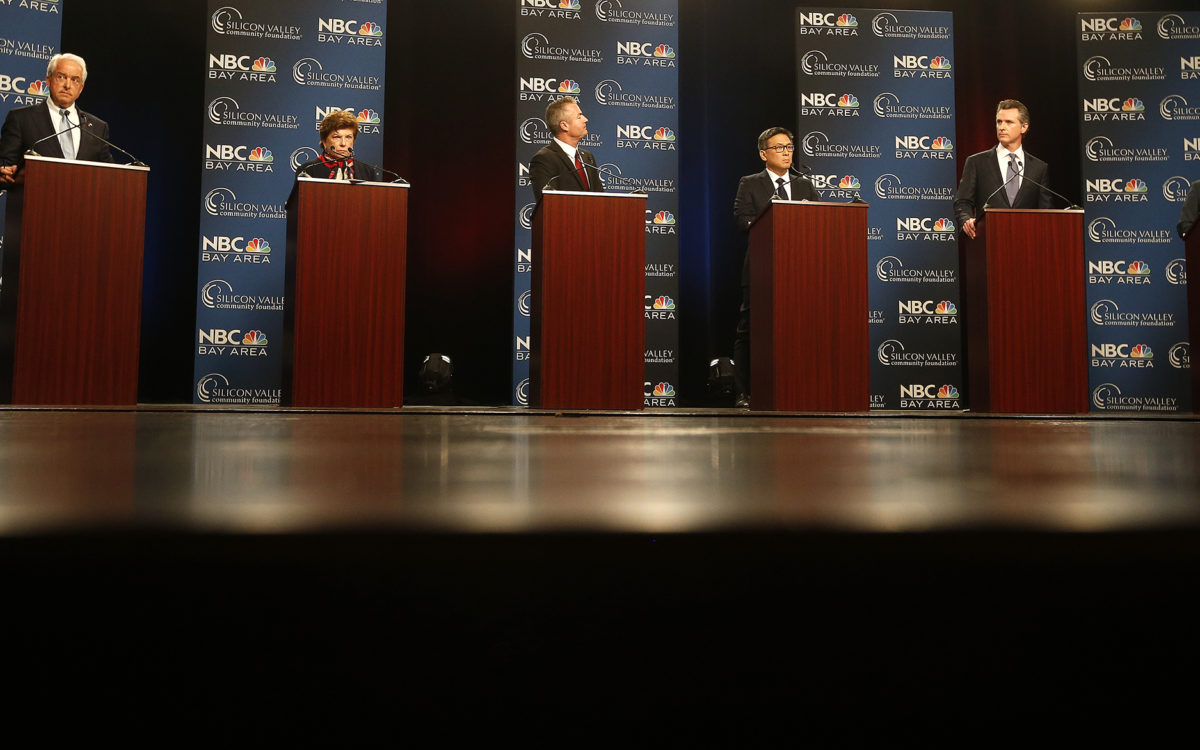 The Democratic candidates for governor of California reaffirmed their support for universal preschool during Tuesday’s gubernatorial debate in San Jose, pledging that they would work to make it a reality if elected.

By contrast, their Republican counterparts opposed the idea of providing state-subsidized preschool for all low-income California 4-year-olds.

All six leading candidates — four Democrats and two Republicans — participated in the event, which was sponsored by NBC Bay Area and the Silicon Valley Community Foundation. The foundation’s Center for Early Learning launched a multi-million-dollar “Choose Children” campaign last September calling for the next governor to make early childhood education a priority.

Participants also touched on high pension costs facing school districts and the current strike of some workers in the University of California system. But early education was the education issue that the candidates discussed in the most detail during the 90-minute debate.

Without giving details as to what kinds of preschool programs he would endorse were he to be elected governor, Lt. Gov. Gavin Newsom said the state should go beyond preschool. He stressed the importance of supporting children and their families during the first three years of life, as well as services for expectant mothers.

“We need to focus on prenatal care, we need to focus on building the architecture of the brain in those first three critical years,” Newsom said. “This must be a top priority for the next governor of California.”

Gov. Jerry Brown has resisted pressures during his eight years in office to expand state-funded preschool to all low-income children, citing the high cost of doing so as a barrier. Brown has increased funding for subsidized preschool and child care, however, and the state established a new “transitional kindergarten” class for some 4-year-olds but doesn’t offer universal preschool.

Paola Reyes, an anchor for the Bay Area Telemundo affiliate KSTS, asked the panelists if the state should provide preschool for all students, including those who are undocumented.

“As governor I will focus on early childhood education for every child,” former Los Angles Mayor Antonio Villaraigosa said. “We have the largest percentage and largest number of undocumented children in the United States. We give them an education; they’ll pay us back in a great economy and good jobs, spending more taxes. I’m all for it.”

State Treasurer John Chiang described himself as a “strong and firm believer in early childhood education,” and said he supports universal preschool.

Former State Superintendent of Public Instruction Delaine Eastin cited research that she said shows “the steepest curve of learning for a brain is zero to 5.”

“Of course we should have universal preschool,” she said.

Seeking to differentiate himself from his Democratic opponents, Newsom pointed to San Francisco’s Preschool for All program, which got underway the year he became mayor in 2004.

“I’m the only person on this stage who actually did it — fully implemented universal preschool as mayor of San Francisco,” Newsom said. “It’s a developmental necessity and we need to advance it for the rest of the state.”

Newsom himself has four children 8 years old or younger.

Despite K-12 education consuming approximately 40 percent of the state’s general fund and higher education billions of dollars more, both issues took a back seat for much of Tuesday’s debate to other topics, such as housing, immigration and the importance of “character” in the race.

None of the Democratic candidates detailed how they would pay for statewide universal preschool. Under the debate’s rules, one candidate was given one minute to answer a question and the others had 30 seconds to respond.

Neither of the two Republican candidates, businessman John Cox and Assemblyman Travis Allen, R-Huntington Beach, backed universal preschool. Cox said he would focus on reducing the state’s cost of living, “So that parents can afford their own education for their kids at early ages.”

Allen pushed back against the idea of California providing universal preschool for undocumented students, repeating his view that the state’s education dollars should only be spent on legal residents.

“California’s education system is for the benefit of California’s citizens first,” Allen said.

He also took issue with the concept of state-funded early childhood education and California’s education system more generally, describing the state’s schools as failing sources of “leftist propaganda.” His answer drew laughter from the debate audience.

Voting by mail began this week ahead of the June 5 primary. The candidates who finish first and second in the primary, regardless of party, will advance to the November general election.