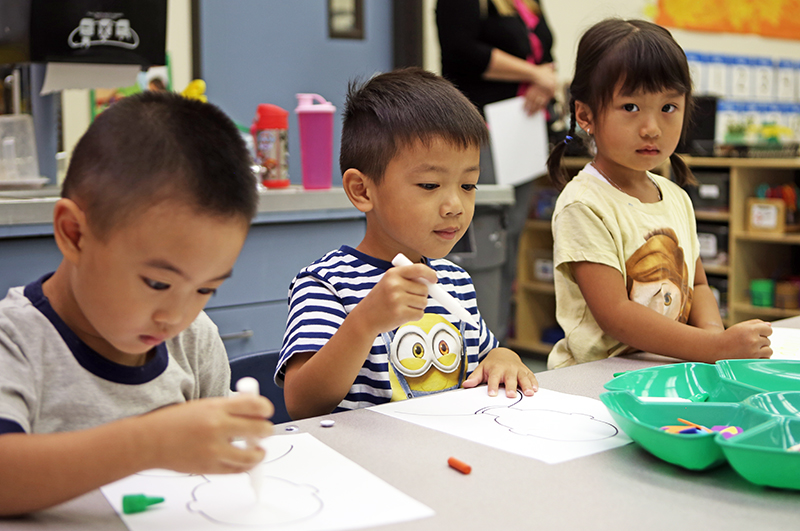 In what would be a significant shift from Gov. Jerry Brown’s position on early education, the four leading Democratic candidates running to replace him next year say they are committed to offering universal preschool in California.

Under Gov. Brown’s watch, California has increased the number of subsidized preschool and child care slots, as well as access to an early kindergarten grade called transitional kindergarten for some 4-year-olds. But much to the frustration of early education advocates, Brown has rejected pressures to expand preschool to all low-income 4-year-olds, mainly citing the costs of such an expansion as the major impediment. In a setback for advocates two years ago, Brown vetoed what was called “The Preschool for All” legislation (Assembly Bill 47).

But at an October event in Sacramento organized by Advancement Project California as part of its “Birth to Five Water Cooler” gathering, Lt. Gov. Gavin Newsom, former Los Angeles Mayor Antonio Villaraigosa, State Treasurer John Chiang and former State Superintendent of Public Instruction Delaine Eastin all agreed that universal preschool was essential not only for children, but for the state.

In addition, all four agreed that early education workers are underpaid, that the state should provide greater support for children long before preschool, and that they would be willing to look at reform of Proposition 13 or the state’s tax structure to generate funds to underwrite an expansion of early education programs. The candidates did not spell out what they meant by universal preschool, but it generally is understood to mean ensuring access to high quality preschool for all 4 year olds, with the state subsidizing the costs for low-income children.

Because it is virtually certain that a Democrat will succeed Brown, their comments suggested that the cause of universal preschool will get a major boost under the next governor. “The event demonstrated there’s a chance we’ll find an early learning champion who will value the importance of high-quality early learning programs for all of California’s kids with teachers who are compensated fairly,” said Patricia Lozano, executive director of Early Edge California, an advocacy organization promoting expanded early education programs.

Several public opinion polls indicate considerable support for expanding access to preschool. For example, an EdSource poll earlier this year showed that nearly two-thirds of parents of young children think the state should be doing more to allow children to attend preschool.

“It is terrific to see the gubernatorial candidates recognize the importance of committing to voluntary universal preschool for all 4-year-olds,” said Karla Pleitez Howell, director of educational equity for Advancement Project California. “It is scientifically proven that the early years of life are the most important for learning.

Newsom, the former two-term mayor of San Francisco who is currently the front-runner based on early polls, described universal preschool as a “developmental imperative” for the state. “It’s not a nice to have,” he said. “It is a must-have in the world we are living.”

He pointed to the “preschool for all” program established in San Francisco while he was mayor as evidence of his commitment to the issue. The program, which began in 2014, offers free or reduced price preschool to all low-income 4-year-olds in the city funded by a special tax approved by voters.

He also noted that he has young children of his own, ages 1, 3, 5 and 8. “You have an opportunity next year to elect a governor that has four of his own kids, that’s experiencing those realities in real, who is not just ‘interested’ in these issues, but is truly passionate and committed to these issues,” he said.

But Newsom said broadening the tax base is critical to being able to underwrite expansion of early childhood programs. “We can actually tax the economy that exists today, not the economy of 100 years ago, which is our current tax structure,” he said. “There have been a lot of proposals even beyond ‘tax reform,’ and that includes the issues of oil-severance tax and other opportunities to be a little more creative.”

Former LA mayor  and Assembly speaker Villaraigosa similarly declared his support for preschool at the Advancement Project California event. “I’m committed to it,” he said. “Almost every Western industrialized nation has some form of early child care. We ought to join the club.”

Villaraigosa said preschool is a right every child should have and not just a privilege for some. Children who are often left out are “disproportionately poor and disproportionately people of color,” he said. “We need to make sure those kids have the resources they need to compete with those who grew up in more affluent homes,” he said.

Villaraigosa said he supports raising taxes when appropriate. “I would be willing to raise taxes if necessary and cut other programs where necessary because I intend to be the governor who implements universal preschool,” he said.

He said reform of Prop. 13 is needed, but that he would prefer it be done through the Legislature rather than going to voters to do so through the initiative process. He said the Legislature should re-examine California’s “broken” tax system. “I’ve spoken out against it my entire life in public service,” he said. “I think the Legislature is up to the task, particularly now that we have a two-thirds majority in both houses.”

As to how the state could pay for it, he said the state could find the money if it made early childhood education a priority, but it would call for making tough choices.

“The children pay the price when the adults get the budget wrong,” Chiang said. Prioritizing the state’s youngest learners means ensuring state dollars are spent efficiently and that districts are accountable for how monies are spent, he said, citing audit findings as an example of aggressive fiscal management.

Chiang made a point of saying that he would support expanding full-day preschool programs, in part he said because it is much harder for low-income parents to have their children attend part-day programs. Under Gov. Brown, the state increased funds substantially for full- day programs, but most children are still in part-day programs.

“We can’t have this system today where you have kids going in for half a day,” Chiang said. “That creates lack of access, especially for low-income folks, who have to take public transportation, who can’t leave (their jobs) in the middle of the day.”

Delaine Eastin, who was the elected state superintendent of public instruction from 1994 to 2002, lamented that California lags behind states like Florida, Georgia and Oklahoma in offering universal preschool, while leading the nation in its spending on prisons. “For someone born in California, it breaks my heart,” she said.”Prison is an expense,” she said. “Preschool is an investment.”

“We have research that shows if we spent more money on preschool, we wouldn’t have as many people on welfare, unemployment, or in jail,” she said.

Eastin said she would go to the voters to reform Prop. 13. But she also argued that the two-thirds vote local governments need to get parcel taxes on real estate approved must be revised. “The truth is, we let you fix the building with a 55 percent vote, but it requires a 66-2/3 vote to staff the building,” he said.

All four candidates agreed that workers in early education programs, including preschool teachers, need to be paid more.

Newsom said that increasing wages for early childhood education workers is key to improving program quality. “It would be reasonable to expect or require workers to have higher credentials, but that would mean paying higher wages.”

Villaraigosa also agreed that early childhood education workers are underpaid, but that additional pay should be tied to better training and preparation. “If we want the best and the brightest, we’ve got to pay them more, and we’ve also got to train them more. And I’m committed to doing that, because I think training is a key issue for early child care.”

Eastin said the United States compared unfavorably to other countries in how much they pay early education workers. In France, she noted, preschool teachers have the same level of education and the same pay as elementary school teachers. “It’s time for us to do that in California.”

Chiang said that early childhood educators in California are “severely under-compensated.” “We ought to pay educators the appropriate salary so that they can have a decent standard of living,” he said. In addition, he said, investing in professional development programs is important so that more teachers can “obtain the advanced degrees needed to run quality early care programs.”