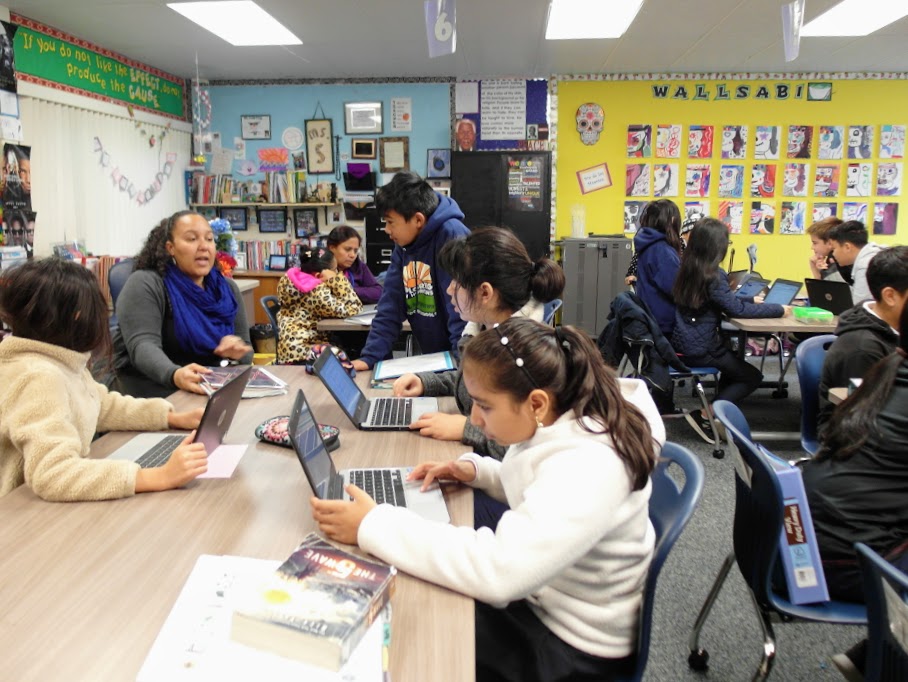 California has implemented a number of new policies in recent years to promote computer science education, but it still has a way to go, according to a report released by the Code.org Advocacy Coalition Thursday.

“2018 The State of Computer Science Education, Policy and Implementation,” outlines how well states have executed policies meant to increase the number of computer science classes taught at schools over the last 18 months.

The coalition, which promotes computer science education, is made up of more than 40 industry, nonprofit and advocacy organizations. The report has been released annually for three years.

“California is sort of in the middle of the pack,” said Alexis Harrigan, director of state government affairs at Code.org. “I would like to see California leading. Given the amazing innovation, I’m surprised that California isn’t leading the country.”

The study looks at nine policies designed by the coalition to increase access to computer science classes for all students.

States that adopt any one of the nine policies show an increase in the percentage of high schools that teach computer science, according to the study.

Harrigan said she is enthusiastic about the progress California has made, particularly the adoption of California’s computer science standards by the State Board of Education on Sept. 7. The standards, while not mandatory, are expected to increase the number of computer science classes taught in California classrooms.

“We at Code.org are really excited about the standards,” Harrigan said. “I think what makes it significant is that California is the largest state to have ever done K-12 computer science standards.”

Harrigan said that while she would have preferred mandatory standards, it is a step in the right direction.

California is working on completing another of the recommended policies – a state strategic plan. The State Board of Education heard recommendations from the California Computer Science Strategic Implementation Plan Panel at its September meeting. The panel was created to make sure teachers are prepared, schools have enough resources and the state’s new computer science standards are implemented fairly and effectively.

Instead, teachers who want a computer science credential generally have to take professional development courses from county offices of education or through their school districts, she said.

The California Department of Education is expected to turn those recommendations into an implementation plan, which the board is scheduled to consider for adoption in March 2019.

Assemblyman Patrick O’Donnell, D-Long Beach, chairman of the California State Assembly Committee on Education, could not comment on the report or its recommendations on Wednesday. O’Donnell has not seen the report and has not had a chance to consider the proposals, said Sophia Kwong Kim, O’Donnell’s chief of staff.

Among those surveyed, the states with the lowest numbers of schools that taught computer science are Louisiana, 16 percent; Mississippi, 18 percent; and Florida, 19 percent.

Females in California are less likely to earn a degree in computer science than their peers. California schools, like other schools across the nation, offer fewer computer science classes in communities with more low-income families and in rural areas, according to research in”2018 State of Computer Science Education.”

The “K-12 Computer Science Access Report,” included in the report released by the Code.org Advocacy Coalition Thursday, was launched in Sept. 2017 and did not collect data in previous years.

Offering students access to computer science courses  is an equity issue, Harrigan said. Computing is the number one source of new jobs in the U.S., with 500,000 open jobs nationwide, according to the report. California alone has 70,000 open computing jobs, Harrigan said. The  average salary for a computing job is $110,000, while the average statewide salary is $56,000.

“Computer science is one of the best ways to support our students who want to graduate from high school and college with high-paying jobs,” she said.

Harrigan said computing jobs are generally open for months and often have to be filled by people from outside California — often people in the U.S. on immigrant visas.

“That is one of the most common stories. You have students who are underemployed and don’t have opportunity, and businesses have to import talent from other countries and other states,” Harrigan said.

Despite the need for people to fill those jobs, U.S. schools often don’t provide computer science classes for all students, according the report. Of 24 states surveyed, only 35 percent of high schools in the U.S. teach computer science.

“We cannot let a generation of students — particularly those from underrepresented backgrounds — leave the K-12 system without some exposure to computer science,” the report states. “Pursuing an access agenda to K-12 computer science provides policymakers a rare opportunity to address equity, workforce, and education issues on a bipartisan basis. We must continue the bipartisan support and momentum we have seen for this critical subject.”