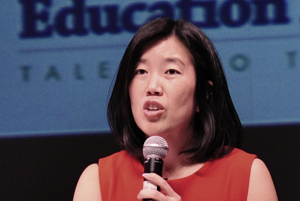 UPDATED NOV. 22 at 2:15 p.m. Pacific Time:  Michelle Rhee says she “is not interested in pursuing a position” in the Trump administration.

If Donald Trump is seriously considering appointing Michelle Rhee as his secretary of education, a deal breaker could be her strong endorsement of the Common Core standards in English and math.

On Saturday, Trump met with Rhee as well as Betsy DeVos, the former chair of the Michigan Republican Party and a strong supporter of charter schools. She is married to multibillionaire Dick DeVos, the son of Amway cofounder Richard DeVos.

Rhee, the former chancellor of the District of Columbia schools, and DeVos are the only two potential secretary of education candidates who have been publicly identified as having visited with Trump himself. While Rhee has been much more public in her support for the Common Core, DeVos supports or sits on the boards of a number of organizations that back the standards.

In many ways, Rhee would be Trump’s ideal candidate. She would send a signal of disruption rather than accommodation to the education establishment. She has been fearless in taking on teachers unions. She is a genius at generating media attention (note the  iconic 2008 Time magazine cover of her holding a broom, a metaphor for sweeping out teachers she deems ineffective).

She supports merit pay for teachers, charter schools and providing taxpayer-funded vouchers that could be used by parents to send their children to private schools – all positions Trump has taken as a candidate. Like Trump, she would target these vouchers to low-income families, unlike some others in the GOP who think they should be made available to all families regardless of income.

Her appointment would also add much-needed diversity to the all white-male tilt of his appointments so far. Rhee is also a Democrat, and Trump could point to her as an example of bipartisanship in the selection process, should he wish to send that signal.

The problem is that during the campaign, Trump repeatedly called for ending the Common Core standards. He particularly went after Jeb Bush, perhaps the most prominent GOP supporter of the standards, on those grounds.

“I’m a tremendous believer in education,” Trump said in this video he issued nearly a year ago. “But education has to be at a local level. We cannot have the bureaucrats in Washington telling you how to manage your child’s education. So Common Core is a total disaster. We can’t let it continue.”

His statement reflected a misunderstanding that the Common Core standards are mandated by the federal government. It is true that the Obama administration encouraged states to adopt them by giving states that adopted “a common set of high quality standards” extra points in competing for a grant from the multibillion dollar Race to the Top fund. But ultimately it is up to states whether or not to adopt them.

Nonetheless, Trump’s opposition is the reverse of Rhee’s consistent and very vocal advocacy on behalf of the Common Core – in some cases hand in hand with Jeb Bush. In a May 2014 interview with Bret Baier on Fox News, she vigorously defended the Common Core, pointing to the poor performance of U.S. students on international tests like the Programme for International Student Assessment (PISA).

“Unless we increase the standards and expectations for our kids, we’re going to continue to fall further and further behind,” she said.

StudentsFirst, the now defunct Sacramento-based organization Rhee founded, made the Common Core a central part of its platform of reforms. The organization issued a lengthy policy brief that lamented the “unfortunate defect” that each state has different standards. The Common Core standards, it argued, were necessary “to address and close the learning gaps among states and hold U.S. students to academically challenging, rigorous standards on par with their international counterparts.”

But just as Trump appears to be retreating slightly from some of his hard-line positions on issues like building a physical wall on the Mexican border, it is quite possible that he will modify his opposition to the Common Core standards.  The opposition to the Common Core has already become more muted in several states that have essentially rebranded the standards by calling them something other than “Common Core,” adapting some of the standards, but retaining their commitment to a new set of standards to guide instruction.

At this point, there are more questions than answers. Will Trump make opposition to the standards a litmus test for whomever he chooses to head the U.S. Department of Education? Just how much does he know about the standards? It is possible that as he finds out more about them, he may modify his public opposition to them.

Many parents’ views on the Common Core are shaped by the experience their children may have had with the standards in their schools. But Trump’s 10-year-old son Barron attends Columbia Grammar and Preparatory School, a private school in Manhattan founded in 1764. Because private schools don’t have to adopt the standards, it is unclear whether Trump will have learned about the Common Core through his son’s experiences.

Being a New Yorker, his views have most likely been influenced by the unraveling of the Common Core standards there, where implementation of the standards were in fact disastrous. That was essentially the view of a blue ribbon panel appointed by Gov. Andrew Cuomo, headed by former AOL Time Warner chief Richard Parsons, that concluded that implementation of the standards and the administration of the tests aligned with them “were rushed and improperly implemented …The result has been disruption and unneeded anxiety in our schools and for students, parents and educators.”

In California, by contrast, roll-out of the standards has proceeded relatively smoothly, and with a fraction of the popular and parental opposition experienced in New York.  That has also been the case in many other states where implementation has stayed out of the media limelight.

Nonetheless, the prominence of Rhee and DeVos as possible secretaries of education has some opponents of the Common Core worried. They are alarmed that Trump might abandon his promises to do away with the standards.

After Trump met with DeVos over the weekend, the transition team issued a statement saying that the two had “focused on the Common Core mission, and setting higher national standards and promoting the growth of school choice across the nation.”

In describing the meeting between Trump and Rhee, however, the transition team said they “enjoyed an in-depth discussion about the future of education in our country. This included the possibility of increasing competition through charter and choice schools. They also brought up the idea of merit pay for teachers going above and beyond in their classrooms.”

The lack of a reference to the Common Core in their discussion was conspicuous by its absence.

Want to get regular articles like these delivered to you online each day?  Sign up for a no-cost subscription to EdSource Today, or other EdSource publications, here.