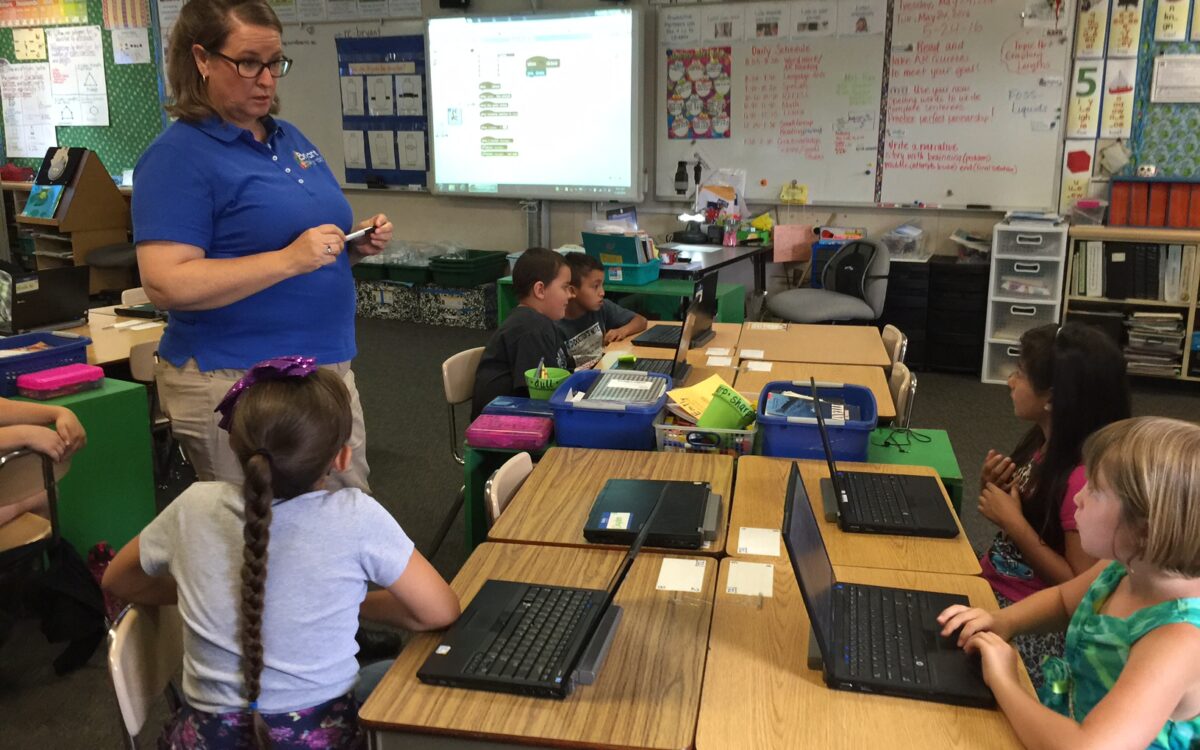 Coming on the heels of President Barack Obama’s Computer Science for All initiative, an alliance of Southern California districts is pooling resources and ideas to boost lagging enrollments of California students in computer science classes.

The consortium, which serves 272,700 students, is the biggest alliance of schools in California that is trying to increase access to computer science education, and is notable because it is based outside established technology hubs such as the Bay Area and San Diego. By forming the Inland Empire Code Consortium in March, the Riverside Unified School District and 10 other districts east of Los Angeles are seeking to increase the number of students in computer science courses, especially girls, African-Americans and Latinos. They also want to increase the number of students in the region training for local openings in tech and computer-related industries.

“The significance of this Inland Empire CS for All consortium of school districts is that it is bringing the conversation around the importance of [computer science] education outside of our tech bubbles,” said Vivian Chan, a computer specialist with Girls Who Code, a national nonprofit dedicated to closing the gender gap in technology.

Last week, Chan attended a summit hosted by the consortium, which also invited executives from the Pentagon, Google, Lockheed Martin, the Alliance for California Computing Education for Students and Schools, or ACCESS, and the U.S. Army Research Laboratory.

Some of the summit participants from Southern California’s defense industry talked about using the consortium as a possible pipeline to recruit future workers. Imran Bidiwala, an engineering manager with Lockheed Martin, said workers are needed to develop and build military jets and aeronautical projects. He said most openings at his company’s facilities, located north of Los Angeles, require a background in science, technology, engineering and math, or STEM.

The school districts in the consortium – located in a huge eastern swath of suburban Los Angeles from Pomona Valley to San Bernardino and Riverside – all have large numbers of Latinos and students who qualify for free and reduced-price meals. More than 61 percent of Riverside Unified’s population is Latino, while the consortium districts with the highest percentage of Latinos are the Pomona Unified School District, with 86 percent, and Ontario-Montclair School District, with 89 percent. Both of those districts joined the consortium this month.

“One of our goals is to expose kids to coding and establish a tech hub that in the future draws students back who’ve been educated in the tech field,” said Lea Deesing, who is the city of Riverside’s chief innovation officer. “We want available jobs here so that they stay.”

President Barack Obama’s Computer Science for All initiative grew out of his 2016 State of the Union address, in which he emphasized the importance of every student being offered the opportunity to take “the hands-on computer science and math classes that make them job-ready on day one.” Earlier this month, the White House pointed to the Inland Empire consortium as an example of an alliance of schools that responded to the call.

In March, Code.org, a national nonprofit working to expand access to computer science for women and Latinos by working with school districts to provide teacher training, partnered with the consortium in a three-year agreement to jump-start the initiative. Since then, more than 150 teachers in the consortium have been trained to teach coding, said Riverside Unified Superintendent David Hansen. During the past year, Riverside Unified has gone from teaching coding to 50 students in two after-school programs to teaching more than 3,000 students districtwide, Hansen said.

He said the consortium has not yet calculated how much it spent on training this year – given that this is its first year of operation. He would only say that “tens of thousands” of dollars has been paid out by the consortium, mostly to Code.org.

Code.org trainers are paid from funds designated in each district’s Local Control and Accountability Plan, or LCAP, which is a road map used by districts in California to manage finances, Kong said. The LCAPs outline specific goals for all students, and under the funding law must outline how they will improve services for English learners, low-income students, and foster and homeless youth.

Code.org provides educators to train teachers at the high school level, while the districts provide their own training to elementary and middle schools, Kong said. Code.org partnership manager Carina Box said that her organization provides curriculum and administrative support, free of charge to the consortium.

One of the goals of the consortium is to help meet the demand for tech workers. The Bureau of Labor Statistics projects there will be 531,000 additional openings for computer and mathematics-related jobs in the United States by 2024, an increase of 13 percent from the number of those jobs that existed in 2014.

“We have a deficit [of qualified job applicants] in these areas,” said Jennifer Vaden Barth, a program manager for Google CS First, which is currently working with the consortium to introduce computer science coding to students through CS First clubs in 4th through 8th grades.

The consortium plans to apply for two Google-funded computer science grants: IgniteCS, which provides up to $10,000 in funding and resources to groups of college students to mentor high school students in their community; and CS4HS, a Google program that trains teachers in how to create computer science curriculum. That grant is valued at $35,000.

The consortium is already working to expose kids in grades K-2 to the Massachusetts Institute of Technology’s Scratch coding language, a basic building block program to create stories, games and animations. They are also teaching Google’s CS First, another coding language, in 3rd and 4th grades. And the districts have participated in Code.org’s Hour of Code, a one-hour introduction to computer science designed to demystify coding and show that anybody can learn the basics.

These coding programs are a small but significant step for the economy of the Inland Empire region, said John Husing, chief economist for the Inland Empire Economic Partnership. A lot of the tech jobs in the region, which was hard hit during the recession, are still unfilled, and local businesses still can’t find qualified applicants, partly because the population is so poorly educated, Husing said.

In the Inland Empire, an estimated 47 percent of 4.5 million adults over 25 years old have no postsecondary education, he said. It’s the least-educated region in Southern California, and only behind the Central Valley – the region with the state’s lowest level of education – by 4 percentage points, he said.

Those numbers are driving the Inland Empire consortium to increase the number of students who are college and career ready. In the local economy, that means training for tech jobs in the highly automated warehouse and logistics industry – which is booming throughout the Inland Empire – and others involving software services and installation, Husing said.

Lea Deesing, who is the city of Riverside’s chief innovation officer, also heads SmartRiverside, a nonprofit coalition launched in 2006 that promotes tech education in part by offering high-tech business grants, free computers and training for low-income families, and coding classes for students.

“One of our goals is to expose kids to coding and establish a tech hub that in the future draws students back who’ve been educated in the tech field,” Deesing said. “We want available jobs here so that they stay.”

The region got another boost last spring when the White House picked Riverside and the surrounding community to join the TechHire Initiative, a nationwide effort to connect residents with the training they need for information technology jobs. TechHire’s goals are aligned with SmartRiverside and the Inland Empire Code Consortium, said Steve Massa, the city of Riverside’s economic development coordinator, who played a lead role in getting the TechHire designation.

“We are building a talent pool,” Massa said.

Chris Catuara, a technology mentor with the Ontario-Montclair School District, said his school district joined the consortium because it wants its students to be part of that talent pool.

“A lot of the kids in Pomona, Ontario and Montclair area never leave their block,” he said. “They walk from their house to school, and back. When they hear about computer science, they don’t even know what that means. I want these kids to have options when they leave here.”

In Ontario-Montclair, 86 percent of students receive free and reduced-price meals, 37 percent are English learners, and 89 percent are Latino.

“With this consortium, you are exposing the kids to something that they might not have known existed before,” Catuara said. “These kids come from poor homes and they need exposure so they can make informed decisions about what they’ll do in life,” he said.