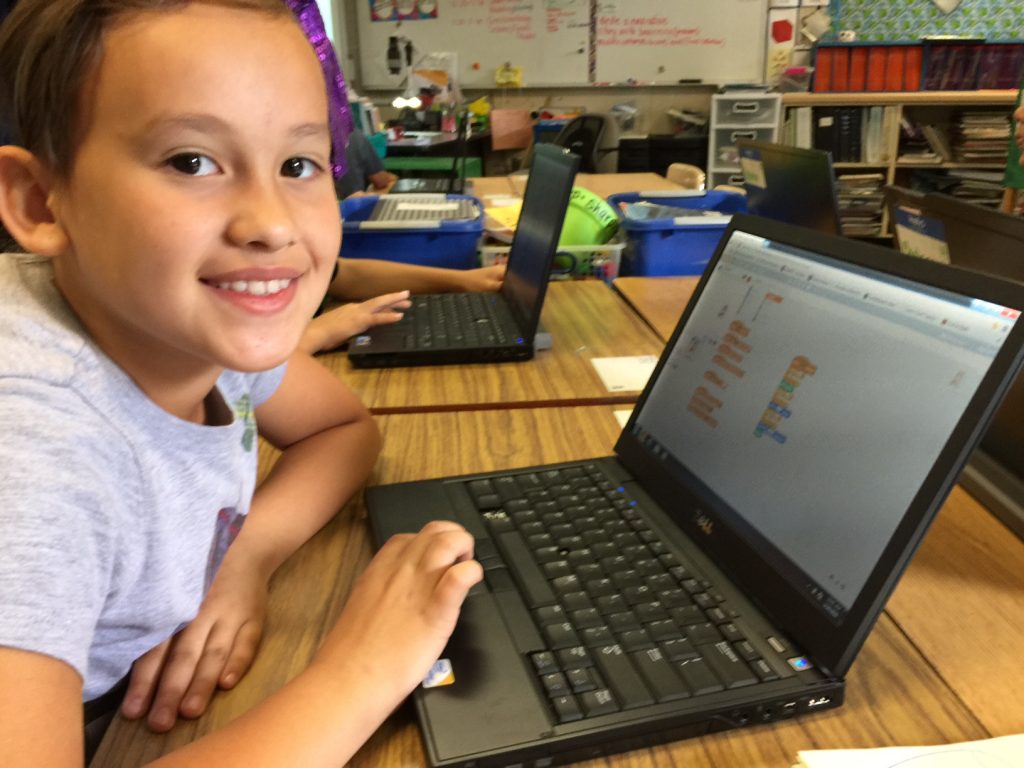 PAT MAIO / EDSOURCE TODAY
Abigail Guisa, an 8-year-old 2nd-grader at Bryant School of Arts and Innovation in Riverside, works on her "Scratch" computer program as part of the district's beefed up approach toward putting more computer science instruction in the hands of kindergarten through 12th-grade students.

PAT MAIO / EDSOURCE TODAY
Abigail Guisa, an 8-year-old 2nd-grader at Bryant School of Arts and Innovation in Riverside, works on her "Scratch" computer program as part of the district's beefed up approach toward putting more computer science instruction in the hands of kindergarten through 12th-grade students.

After years of lagging behind Arkansas, West Virginia and several other states, California is expanding computer science in public schools across the state and training teachers to teach it.

“It is somewhat surprising that California is not ahead in computer science, considering that is where Silicon Valley is,” said Amy Hirotaka, director of state government affairs of Code.org, a national nonprofit working to expand access to computer science and to increase participation by women and minorities.

But Hirotaka and other advocates of expanding computer science say change may finally be coming in California, pointing to state-based groups and others who are pushing for a broad policy shift that would put computer science instruction into more public school classrooms. While the efforts underway are largely disconnected, they are creating a critical mass that could hasten statewide action. They include:

“I think there is so much momentum with computer science, and that there are so many resources available to move it along,” said Julie Flapan, executive director of the Alliance for California Computing Education for Students and Schools, or ACCESS,  “We’d like to see this happen sooner (rather) than later.”

“I’d say we are in the beginning stages of a formalized process of developing standards for computer science, or maybe even a framework,” said Lauryn Wild, commission chair for the Instructional Quality Commission executive committee.

Among those leading the charge is the Instructional Quality Commission, which advises the State Board of Education on curriculum and instruction.

Among those leading the charge is the Instructional Quality Commission, which advises the State Board of Education on curriculum and instruction. The commission, which is vice chaired by former State Superintendent of Public Instruction Bill Honig, recently consulted with national experts on Next Generation Science Standards and computer science about ways to include examples of common practices used in computer science in California’s new science framework.

“I’d say we are in the beginning stages of a formalized process of developing standards for computer science, or maybe even a framework,” said Lauryn Wild, chair for the Instructional Quality Commission.

The commission plans to meet on June 20 to review the revised NGSS proposal and send it to the State Board of Education, initiating a second, 60-day “field review,” from June 28 to Aug. 29. A previous comment period ended in January.

The Computer Science Teachers Association is leading the way in developing computer science standards, and a coalition of educators, state representatives and school districts is working to develop an overarching framework for bringing computer science into all K-12 grades. The group begins its final review of the proposed framework June 8-28.

The framework will provide overall guidance for a new computer science curriculum, while the standards will outline detailed student performance expectations at specific grade levels, explained Pat Yongpradit, chief academic officer of Code.org, and one of the framework drafters. Code.org has partnered with nearly 30 school districts in California and 100 of the largest school systems in the United States to make computer science part of the core curriculum in public education.

“They are a rallying point for computer science,” Yongpradit said.

In 2014, Gov. Jerry Brown signed Assembly Bill 1539, which directs the Instructional Quality Commission to consider the development of computer science standards and make a recommendation to the State Board of Education by July 2019. It is a “permissive bill,” which means it is not a requirement or meant to be mandatory.

This fall, the commission could begin a formal process to draft standards that reflect those being developed by the Computer Science Teachers Association, Wild said.

The Legislature also is currently considering a proposal, Assembly Bill 2329, that would create a computer science advisory board of educators, government officials, industry leaders and nonprofits to develop a strategic plan. It was sent to the full Senate for consideration on June 1. The advisory board, if approved, wouldn’t be formed until next year, at the earliest.

Los Angeles Unified, Oakland Unified, San Francisco Unified and Riverside Unified, among other school districts, aren’t waiting for guidance from Sacramento. They are creating computer science curriculum pathways from elementary to high school, with several collaborating with national groups on funding for courses and teacher training.

One example is Bryant Elementary School in Riverside Unified, a school district in the Inland Empire, east of Los Angeles. Five years ago, the school was in danger of closing due to declining enrollment, budget cuts and low test scores. Enrollment had fallen to 270 students, and it ranked 27th among 29 elementary schools in the district on California’s Academic Performance Index, a former measure of academic progress.

It has since hired an instructor who teaches computer science curriculum for 40 minutes a week at every grade level in the K-6 school. There are also before-school and after-school computer clubs.

In the early grades – K-2 – kids are exposed to MIT’s Scratch coding language, a basic building block program to create stories, games and animations. In 3rd and 4th grade, they advance to Google’s CS First, which is another coding language program for students. In Bryant’s final two grades, the instructor teaches Code.org’s Hour of Code, a one-hour introduction to computer science, designed to demystify code and show that anybody can learn the basics.

“It was a failing school,” said Principal Lari Nelson, who began turning things around by adopting the Core Knowledge Curriculum, a program that builds cultural literacy by weaving history, science and literature together with art and music. She also renamed the school Bryant School of Arts & Innovation. Today, enrollment stands at 420 students.

Another key factor in Bryant’s turnaround: Bryant has become a leader in piloting and implementing computer science curriculum, which district leaders cite as an example of their broader efforts to bring a more robust computer science program to other schools in Riverside and eight nearby districts.

“I started with computer science classes in kindergarten. I like it because I get to learn something new, one time each week, about technology,” said Abigail Guisa, 8, a 2nd-grader at Bryant. “I want to become a technology teacher, because if I can learn something, then someone else can, too.”

The school is an integral part of the Riverside district’s bigger plan to create a computer science pathway for K-12 grades, said Renee Hill, Riverside’s assistant superintendent in charge of instructional support.

“Our work with Code.org is an effort to make coding experience available to each and every student,” said Hill, whose district serves 42,000 students.

“Most states don’t yet have education standards on what would be taught and at what grade level,” said Hadi Partovi, a tech entrepreneur and founder of Code.org. “Without standards, it will be hard to make progress in a state as large as California.”

The urgency to expand computer science curricula is rooted in the fact that information technology is one of the fastest-growing job sectors across California and the nation.

The U.S. Bureau of Labor Statistics projects there will be 531,000 openings for new computer- and mathematics-related jobs in the U.S. by 2024. By 2018, 51 percent of all STEM jobs are projected to be in computer science- related fields.

Code.org estimates that California currently has more than 77,300 open computer jobs with an average annual salary of $105,622 – nearly double what jobs pay outside of the state. Yet California has struggled to fill those jobs, with only 3,500 computer science graduates in 2014, only 15 percent of them females.