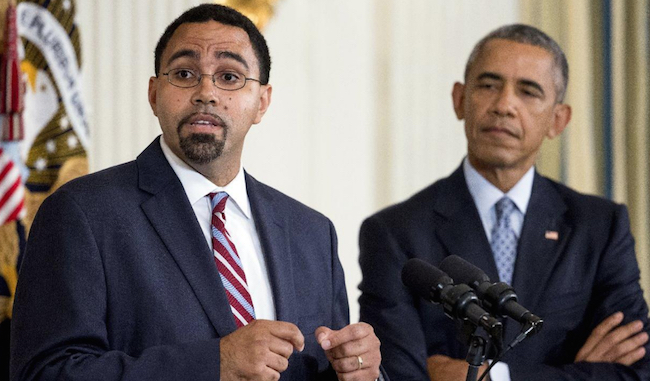 The U.S. Department of Education released final regulations Monday for the Every Student Succeeds Act that back away from earlier drafts on school rankings and other issues that California’s education leaders had loudly criticized.

The lengthy regulations, which mark one of U.S. Secretary of Education John King’s final acts, have been a continual source of conflict with state officials and with U.S. Republican Senate leaders. On Monday, Sen. Lamar Alexander, R-TN – who as chairman of the Senate education committee was instrumental in ESSA’s passage in 2015 – reiterated his previous threat to overturn the earlier draft rules, which he characterized as intrusive and overreaching. But he added in a statement to Education Week, “I will carefully review this final version before deciding what action is appropriate.”

The biggest compromise welcomed by California officials deals with how states will determine which low-performing schools will require “comprehensive” intervention and which will need lighter forms of state assistance. (Go here for a summary of the final regulations.)

The new federal law incorporates some of the factors besides standardized test scores, such as student suspension rates, that the State Board of Education has included in its new school and district accountability system. But the draft regulations required states to give schools an overall or “summative” rating, like an A-F grade, based mainly on test scores.

That plan clashed with the state’s more complex “dashboard” that avoided a single ranking and gave more weight to a half-dozen factors, including a new metric measuring readiness for college and careers.

The final rules will allow states like California to use a data dashboard instead of a single index to identify the lowest-performing schools, and to use a minimum of categories indicating whether schools need substantial or targeted assistance or no help.

State board President Michael Kirst and State Superintendent of Public Instruction Tom Torlakson had detailed their disagreements with the draft rules in a 10-page letter in August. ESSA applies only to low-performing schools, not school districts. In their letter, they said that, unless amended, the regulations “will derail the significant progress being made in our state towards creating a single, aligned system” that would meet both federal and state requirements. The new rules should enable the state board to take a more unified approach.

In an email Monday, Kirst indicated he was encouraged by the final regulations. “The new regulations appear to provide more flexibility in some important areas that California recommended in its response letter to the draft regulations. More time is needed to assess the precise language in today’s announcement,” he wrote.

But he also cautioned that there are changes that “appear to have gone further” than the draft regulations. One requires states to give schools a low rating if at least one student subgroup, such as low-income or special education students or an ethnic or racial group, is persistently low performing. Civil rights groups will welcome this requirement, which will capture far more than 5 percent of schools, but Kirst questioned whether it is consistent with the law itself.

The new regulations appear to give California more flexibility on a related issue. ESSA requires states to evaluate schools on five factors: annual test scores in math, English language arts and science; growth in those scores over time; high school graduation rates; the rate of progress of English learners in becoming proficient in English, and a nonacademic factor of a state’s choice. The draft regulations limited the impact of other factors in ranking a school.

The final rules would appear to allow states to include other metrics, such as the percentage of students who pass Advanced Placement tests, if justified by research. This could enable California to give greater weight to its career and college readiness indicator, which the state board is in the process of creating.

The final regulations extend – from July to September – the deadline for states to submit their plans for complying with ESSA and to push back the starting date for determining which schools need assistance until the 2018-19 school year. ESSA governs how states can use federal education funding, including Title I, which allots $2 billion to California for low-income children. The state board, which is about to begin a lengthy planning process for the money, had sought the delay.