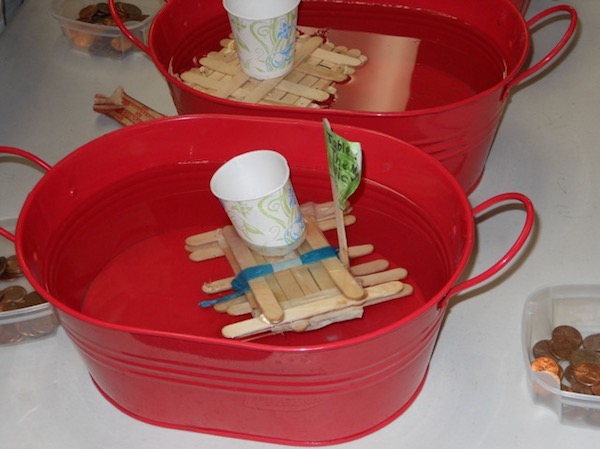 Louis Freedberg/EdSource Today
Students' rafts – part of a project based on the book "Hatchet" by Gary Paulsen – are put to the test in tubs of water.

Louis Freedberg/EdSource Today
Students' rafts – part of a project based on the book "Hatchet" by Gary Paulsen – are put to the test in tubs of water.

The young-adult novel “Hatchet” – about a boy who learns to live in the wild after surviving a plane crash – has been a staple of elementary-school English classes for years. But this year Sara Siebert taught it with a twist.

She assigned her fifth-graders at the Santiago Elementary School in the Santa Ana Unified School District to build rafts out of popsicle sticks, string, duct tape and glue to recreate part of the book in which the boy uses his only tool – a hatchet his mother gave him before his departure – to build a raft.

In the process, the students not only gained new appreciation for the novel but drew on their math skills to measure and design their materials, and deepened their knowledge of science by learning about buoyancy and solubility.

As part of their efforts to help students meet the Common Core State Standards, adopted in 43 states including California, teachers in Santa Ana and elsewhere throughout California are increasingly turning to the strategy of “project-based learning” as exemplified in Siebert’s raft-building exercise.

Interviews with educators in five other school districts and one charter network being tracked by EdSource Today as they implement the Common Core suggest the strategy is becoming more popular in classrooms throughout California.

In addition to Santa Ana, school superintendents in Elk Grove, Garden Grove, Fresno, San Jose and Visalia, as well as the chief academic officer of Aspire Public Schools, a charter network with 35 schools throughout California, all said that their schools have either recently increased the time students spent on project-based learning as a direct result of the Common Core standards or redesigned existing projects to better align with the new standards. The voluntary Common Core standards, which cover math and English Language Arts, emphasize critical thinking and hands-on activities to help students master the subject matter.

“The relevance of a project really inspires kids to look deeper and actually allows more complex problem-solving activities to go on,” said Chris Wheaton, superintendent of the Visalia Unified School District. “So that’s why I think we’re seeing more of it.”

The Common Core standards include explicit expectations that students learn how to work together, acquire skills to solve real-world problems, and persist in doing so – all core components of project-based learning,

“They don’t realize how hard they are working. They are collaborating with peers. They are able to be creative. They are disagreeing along the way, but from those disagreements comes better work. These are all skills they will be able to use throughout life,” said fifth-grade teacher Sara Siebert.

The challenge for teachers is that projects that truly help students meet the Common Core standards take a lot of thoughtful planning, said Linda Darling-Hammond, a professor in Stanford University’s Graduate School of Education and chair of the California Commission on Teacher Credentialing.

“The teacher has to think about what kids need to do to execute a project successfully, to be ready in case a student is going down a dead-end, and be able to design ways for the student to demonstrate his or her learning,” Darling-Hammond said.

In Santa Ana, project-based learning – in the form of what the district calls performance tasks – has been fully integrated into the school curriculum, such that teachers are expected to include such tasks in every subject area. To prepare them, over a two-year period nearly four dozen so-called CLAS teachers – Certificated Learning and Achievement Specialists – on special assignment helped coach teachers on all aspects of Common Core implementation, including performance tasks in every unit of study.

Seibert has gone further than what district officials require, making projects a central part of her 5th-grade curriculum.

For example, when students studied astronomy, she had them read both fiction and non-fiction texts related to the issues they studied. Students then had to research a planet and work with a partner to create an alien out of materials they found that could populate that planet, and then present their alien to their classmates.

“They don’t realize how hard they are working,” Siebert said. “They are collaborating with peers. They are able to be creative. They are disagreeing along the way, but from those disagreements comes better work. These are all skills they will be able to use throughout life, in their future jobs, in friendship and relationships.”

In a particularly vivid example of California schools’ new attention to project-based learning, the San Jose Unified School District has spent $150,000 over the past year to train 70 teachers at Lincoln High School to focus more heavily on interdisciplinary projects.

“This is really helping us to transition to the Common Core, and to help students acquire all the skills the new standards require – to communicate, collaborate, think critically, and be creative,” said Lincoln High Principal Matthew Hewitson.

Students have completed “hundreds” of projects, Hewitson said. Physics and algebra students, for instance, have used their math skills to design theater sets, while English and social studies students have produced an online magazine tackling the issue of cultural notions of beauty, how fashion models are portrayed, and the resulting impact on high schoolers’ self esteem.

“Every project has a driving question that leads to a product, or a solution to a social issue or a proposed answer to some sort of research question,” Hewitson said. Students, he added, are challenged “to behave as we all do in the real world on a daily basis, collecting information from multiple sources, analyzing, making judgments, and working with others to produce something useful.”

“At its best, a project will get students deeply involved in exploring a content area, so that they feel like they understand the issues deeply and can demonstrate their learning in ways that are engaging and ideally have an audience beyond the teacher,” Darling-Hammond said.

The idea behind project-based learning long predates the Common Core.

The concept, if not the name, first came into use more than 100 years ago, when education reformers challenged the rote memorization style of learning then standard in most public schools. The earliest advocates of what was initially called “experiential education” included William Heard Kilpatrick, a professor at Teachers College of Columbia University, who in 1918 wrote a book titled “The Project Method.”

Another major influence in the development of project-based learning has been the work of Benjamin Bloom, an educational psychologist credited in 1956 with proposing a taxonomy, or classification, of teaching goals. Bloom placed “knowledge” at the base of a pyramid of cognitive levels, which rose, in turn, to include comprehension, application, analysis, synthesis and evaluation.

At its higher levels, the taxonomy “moves you more toward project-based learning that requires synthesis and problem-solving, as opposed to rote recitation, where you told me the answer, I memorized it and I recited it back to you,” said Santa Ana Unified School District Superintendent Rick Miller.

Early practitioners of project-based learning devised imaginative ways to capture students’ attention. In Winnetka, Ill., in the 1920s, school superintendent Carleton Washburne taught first-graders about the postal system by having them create a school post office and encouraged fourth-graders to learn about astronomy by viewing the night sky through a telescope and building a solar system to scale in the school gym. Washburne also organized “student corporations” that offered hands-on experience with working-world pursuits. Kids bred chickens, rabbits and hamsters to sell, worked in the school cafeteria, and made loans through a student credit union.

Project-based learning and the Common Core, webinar by the Association for Supervision and Curriculum Development

“Kids go in-depth into a topic they’re interested in and they research it, and then they do a formal presentation to an outside audience about what they learned,” Darwish said.

The surging interest in project based-learning has inspired considerable professional development efforts and work by specialized consultants. About 650 educators from 15 countries attended a dedicated conference on project-based learning in Napa last year, called PBL World. The June conference, to be held in Napa again this year, is sponsored by the Buck Institute of Education, which specializes entirely in project-based learning.

“Teachers are inviting administrators to come into the classroom, because they have as much excitement as the kids have,” she said. “It is a big deal.”