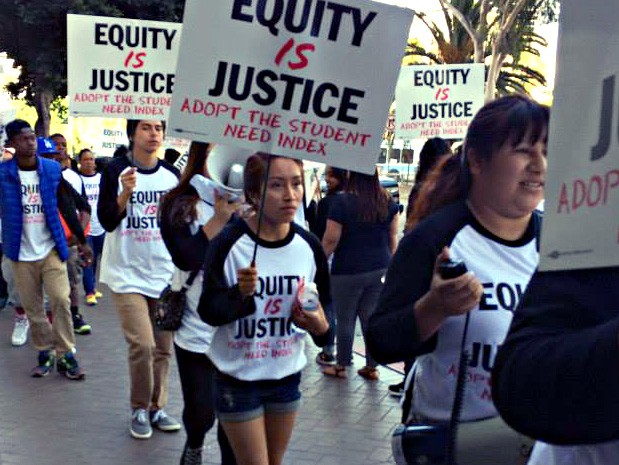 The Los Angeles Unified School District will begin using a new student need index to direct additional funding to the neediest schools under a plan expected to be adopted by the school board today.

Under the state’s new Local Control Funding Formula (LCFF), districts receive supplemental grant funding based on their numbers of “high-needs” students – low-income students, English learners and foster youth. Districts in which these students make up at least 55 percent of enrollment receive concentration grant funding in addition to the supplemental funding.

During the 2013-14 school year, L.A. Unified received about $700 million in supplemental and concentration grant funding, which it distributed to schools throughout the district, according to the LCFF.

But going forward, the bulk of those additional funds – expected to be about $138 million in 2014-15 – will be allocated to schools according to a new student need index. Currently, if a student is in more than one high-needs category – such as a low-income English learner – that student would only be counted once. This is referred to as an “unduplicated count.”

In the new index, the district will rank schools based on a “duplicated count” – counting students twice or more if they fall into more than one category. The district is also adding a fourth category: homeless students. Schools are ranked on the index based on the duplicated count divided by the total number of students. Those with the highest number of high-needs students will be on the priority list for funding.

Supporters of this approach say that schools that serve the most students with multiple needs are typically located in impoverished communities. Those students need more resources than low-income students residing in higher-income neighborhoods. Less than a third of L.A. Unified schools are expected to receive the extra funding next year.

“We acknowledge that this year is a down payment” on efforts to improve all schools, school board member Steve Zimmer said. “We will revisit the index on an annual basis and determine need. As more funding comes in, we hope to reach a larger set of schools over the years.”

Community-based organizations in East and South Los Angeles rallied supporters to testify in favor of the student need index at the last board meeting on June 9. With a 5-1 vote, with board member Tamar Galatzan opposed, the board approved a resolution supporting the index. The final adoption of the index is set for today, when the board votes on the Local Control and Accountability Plan, which establishes district spending under the new funding formula for the next three years.

Nancy Meza, an organizer with InnerCity Struggle, called the vote “historic” because “it is one of the few times that those directly affected by the L.A. Unified budget have had influence in budget decisions.”

The organizations had proposed including attributes of the students’ communities in determining the school’s ranking on the index, such as the level of gun violence, access to healthy food and full-service health clinics, and the number of parks and play spaces in the neighborhood. But Edgar Zazueta, the district’s chief of staff for external affairs, said when district staff looked into the issue, there was essentially no difference in the ordering of schools if they relied on the duplicated student count alone or included the community factors.

Although some people, including Galatzan, oppose the index, saying that it shortchanges low-income, English learner, foster and homeless students who are attending less needy schools, the vast majority of advocates for low-income students have been supporting L.A. Unified’s approach.

“We know that this is not a lot of money,” said David Sapp, director of education for the ACLU of Southern California. “The district can’t do everything it needs to do to meet the needs for all needy students. Differentiating is a sensible approach and consistent with equity principles.”

Sapp said many other districts are using the funds for select schools, but he doesn’t know of any district other than L.A. Unified that has developed a need index and is basing the index on duplicated counts. “This weighted approach is only being done by L.A. as far as I know,” said Sapp, who is in the process of reviewing spending plans for a large number of districts.

Zimmer acknowledges that many schools in the district he represents will not qualify for funding during the next three-year cycle, but he believes the index is the best way to distribute limited funds.

Under the Local Control Funding Formula, “we are charged to eradicate the myth of fairness,” Zimmer said. “The promise of equality of opportunity is really betrayed by the vast inequities of resources that are available to children depending on where they live – in a resource-rich or resource-barren community. Although many, many factors contribute to the differences in educational outcomes, community resources just can’t be ignored any more.”