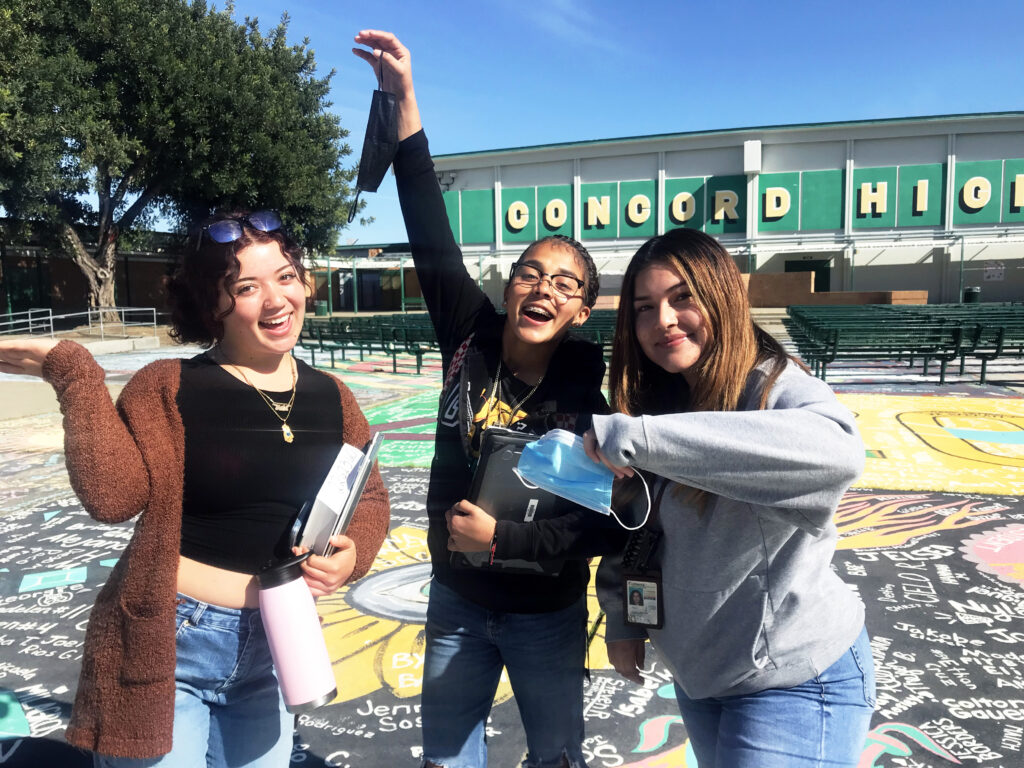 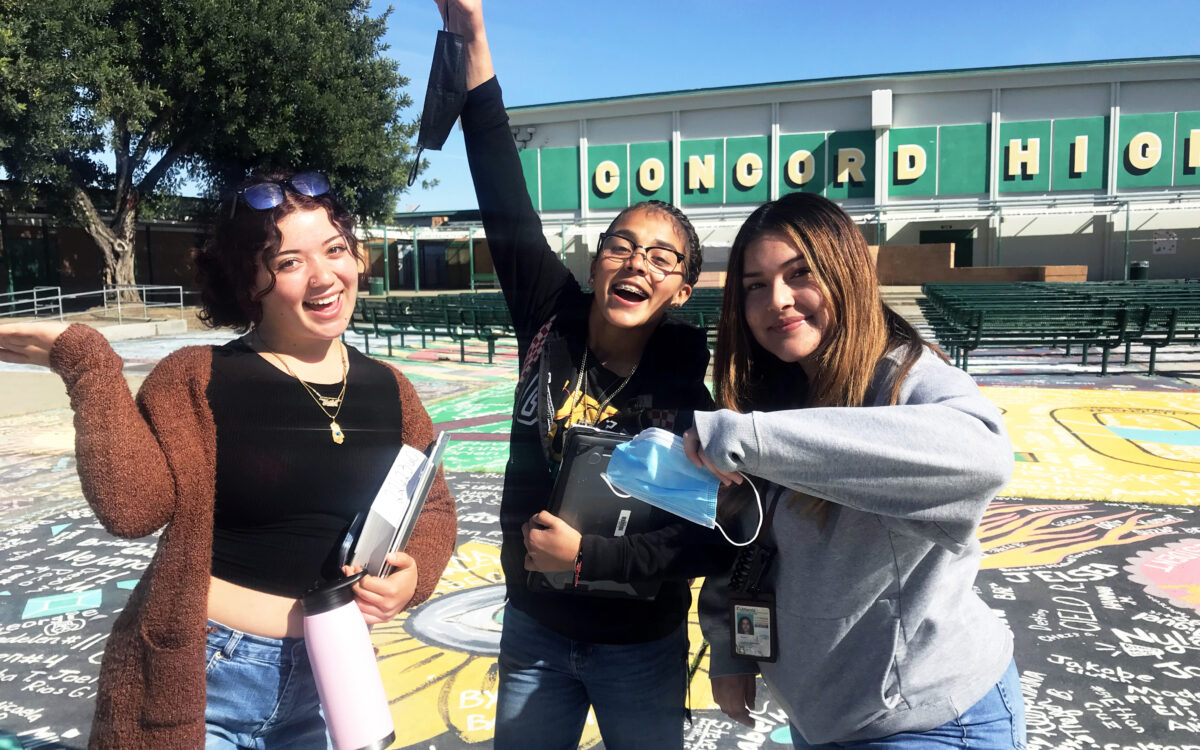 Credit: Carolyn Jones / EdSource
"I feel like I can finally breathe." That was the sentiment at Concord High School in Contra Costa County on Monday, when Kaila Murillo (left), Jacqueline Tamayo (center) and Karen Jauregui blissfully flung off their masks on the first day face coverings were made optional in their district.

Credit: Carolyn Jones / EdSource
"I feel like I can finally breathe." That was the sentiment at Concord High School in Contra Costa County on Monday, when Kaila Murillo (left), Jacqueline Tamayo (center) and Karen Jauregui blissfully flung off their masks on the first day face coverings were made optional in their district.

At Concord High School in Contra Costa County, about 70% of students wore masks Monday, at least some of the time, said principal Rianne Pfaltzgraff. Most of the staff also chose to keep their mask on, but some were still elated that masks were no longer required.

In at least one class, teachers held a “mask reveal” where students flung off their masks and looked at each other’s faces for the first time. Junior Kaila Murillo was amazed at how different her friends looked than she expected. The eyes and ears offer only a glimpse of a person – so much is expressed in the nose and mouth and smile, she said.

Even if they kept everyone safe, masks were a major inconvenience, Murillo said. They fogged up your glasses, they were stifling if you had allergies, they made your skin break out, and they were intensely uncomfortable during those hot Concord afternoons, she said.

“I threw all my masks out this morning,” she said. “It felt great. It felt like summer’s almost here. It feels like you can finally breathe.”

Karen Jauregui, a junior, said she was ecstatic to breathe freely and see her friends’ faces, some for the first time. But she wore her mask during first period out of respect for her teacher, who has an underlying health condition.

“At first it was a little scary to not wear a mask, but almost everyone I know has had Covid and gotten better, and I’m fully vaxxed,” she said. “So it feels low risk.”

California’s mask mandate went into effect in the summer of 2021, as most school campuses prepared to reopen after being closed for more than a year because of Covid-19 concerns.

The end of the state mask mandate Monday was a turning point for school districts, many of which have been besieged by anti-mask protesters at school board meetings and on campuses. Now school districts and county health offices have the authority to decide whether to continue to require masks on campuses. Many districts eagerly retired the mandate.

At Nevada Joint Union High School District, everyone’s step got lighter Monday, Superintendent Brett McFadden said. The district defied the state mandate and made masks optional for students on Feb. 22, after anti-mask protests began erupting at campuses. But with the state removing the mask mandate for all students and teachers, Monday was the first day that the staff could come to class without a face covering. About 75% of students and staff did not wear masks, he said.

“Now that we are in an optional mode, we aren’t having to enforce it – which takes time and effort,” he said. “Now we can concentrate more on interacting with kids and getting back to what we are good at – providing instructional leadership to kids.”

California’s two largest school systems have yet to lift their mask mandates. San Diego Unified will end the requirement April 4, following the district’s spring break, while Los Angeles Unified is still negotiating with its teachers union about lifting the mandate. LAUSD Superintendent Alberto Carvalho said he favors following the state’s decision to strongly recommend masks be worn in schools but not to mandate them.

South San Francisco Unified School District’s board voted last week to keep its indoor masking mandate until at least April 18, although it did remove the requirement that students wear a mask outdoors. District officials will consider Covid-19 case rates and other public health data before deciding whether to recommend masks instead of requiring them.

Some districts are waiting until after spring break to lift indoor mask mandates. Oakland Unified, Sacramento City Unified and Davis Joint Unified plan to lift their mandates in mid-April. District leaders have expressed concern that there could be a post-spring-break surge similar to the increase in cases after the winter holiday break.

West Contra Costa Unified officials announced Saturday – after conferring with its unions – that masking would be “strongly recommended but no longer required,” at high schools, middle schools and district offices. The district will continue requiring masks at elementary schools through April 15, when students return from spring break.

District officials wanted to “move cautiously,” not knowing the vaccination rates of elementary students, said district spokesman Ryan Phillips. The district knows that 87% of students ages 12 and older are vaccinated.

San Francisco Unified adopted a similar plan, allowing masks to be optional at high school and middle schools, but requiring them for elementary schools through April 2, after spring break.

Oakland parent Sarah Jackel said she had a hard time explaining to her kids why one had to wear a mask to school Monday and the other didn’t. Her 5-year-old son attends a private preschool, which lifted its indoor mask mandate, and her 7-year-old daughter attends a school in Oakland Unified, which is keeping its mask mandate through April 15 over concerns of a surge after spring break. Officials said the district will “assess the continued need for the indoor mask mandate following spring break, after consulting with our labor partners and other stakeholders.”

Jackel said she favored the mask mandate earlier in the school year but believes it is time to lift it now. She wants the district to follow public health guidance that allows the removal of masks. “I am disappointed they are delaying that decision to consult with labor when our kids so desperately need a return to normalcy,” she said.

At Concord High School in the Mount Diablo Unified School District, Jacqueline Tamayo, a junior, opted to keep her mask on, at least temporarily.

“I’m still a little worried about another outbreak,” she said. “I think we need to respect people’s health needs, so before class I’m asking the teachers if they’re comfortable with us wearing masks or not wearing masks.”

Things are quite a bit different at Newport Harbor High School in Newport Beach, where physics and astronomy teacher John Brazelton said only about 15% of his students wore face coverings Monday.

Brazelton, a cancer survivor at increased risk of severe illness or death from Covid-19, is still masking. He is concerned about future waves of Covid and about the long-term effects of the virus, which leave some patients with a lifetime of medical issues.

Redwood Middle School sixth grade teacher Amelia Brown said she also would continue to wear a mask to school. The last time the mask mandate was lifted the state experienced a surge of cases, Brown said. She intends to wait two to four weeks to ensure cases remain low before removing her mask.

Brown witnessed one instance of a student pressuring another to remove her mask Monday. She tried to counter that by explaining to students that they should follow their parents’ instructions about whether to wear a mask.

Brown did enjoy seeing the faces of the students who chose not to mask. “It was fun to see everybody’s faces. I did enjoy that,” she said. “When I knew it (the mandate) would be lifted I explained that I would continue to wear my mask.”

She said that about two-thirds of the students at the Napa school continued to wear a mask on Monday. Latino students, who make up 66% of the student population, overwhelmingly continue to mask, she said.

Even some students in more conservative parts of the state had trepidation about removing their masks Monday. Alexis Tinnin, a freshman at Frontier High School in Bakersfield, plans to continue wearing her mask in school to stay safe and healthy, especially since she is an athlete preparing for track season. She said that she is concerned that the lifting of mandates might prompt a rise in Covid cases. The current Covid rates cause her concern.

“I feel like it’s still not safe,” she said.

She said she expects that most students at her school will take the opportunity to go without masks now that it’s not required.

Frontier High sophomore Heidi Zaurbekova will keep her mask on to protect her sister, who is disabled.

“We still have so many students in classrooms, and it could spread easily,” she said.

On Monday morning, the majority of the students at Frontier High School in northwest Bakersfield had bare faces, though some had their masks handy as they approached classrooms.

The scene looked vastly different at another high school on the other side of Bakersfield. Most students at Mira Monte High School in southeast Bakersfield wore masks as they exited their cars on campus.

The communities on opposite sides of town have experienced roughly the same rates of Covid over the past two years — about 30% of residents have reported positive cases, according to Kern County Public Health data. However, the communities were affected by Covid in different ways.

Latino families living in the neighborhoods surrounding Mira Monte High School were more likely to be hit hard by earlier, deadlier waves of Covid in 2020 compared with those in the affluent northwest Bakersfield community where Frontier High School is situated.

Mira Monte’s student population is 90% Latino compared with Frontier’s population, which is 50% white and 35% Latino.

Mira Monte sophomore Carolina Mejia was visibly excited that she could remove the mask, which she says caused her skin to break out and hampered her breathing.

Mira Monte senior Romero Carranza said he would keep his mask handy for areas on campus where it gets crowded with students, such as the line for lunch. However, he said a lot of the classes that he is in are pretty empty, so he doesn’t plan on wearing it there. Either way, he said it’s important to respect those who are wearing masks.

This story was changed to clarify that the Oakland Unified School District will consider lifting its mask mandate after April 15 and after consulting with its labor unions.