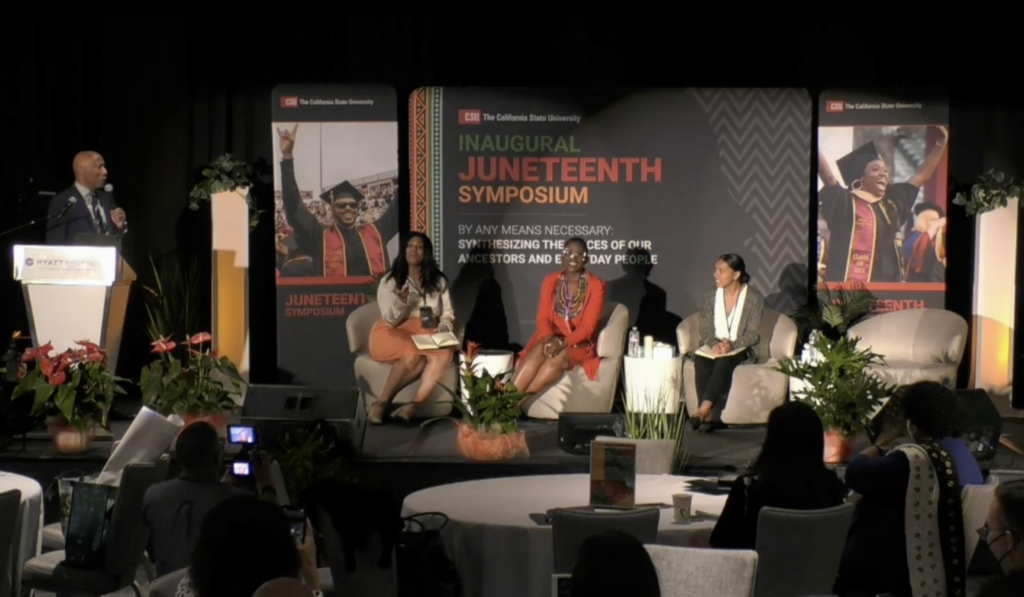 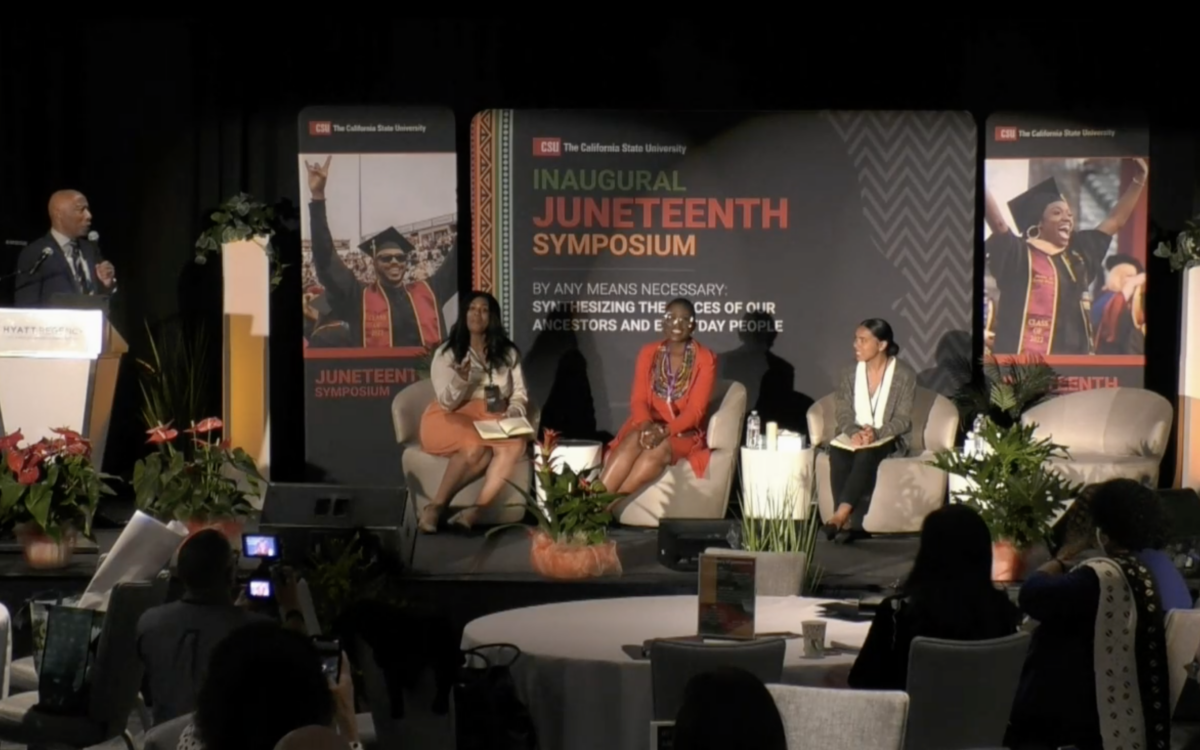 The symposium, which was hosted in person and virtually by CSU Dominguez Hills on Wednesday and Thursday, featured Princeton University professor and author Cornel West, Grammy Award-nominated singer and actress Angie Stone, University of Southern California professor Shaun Harper, UC Irvine professor Michele Goodwin, California Secretary of State Shirley Weber and other academics and student advocates from across the state.

“We want to set the standard for what all of higher education in this nation ought to be thinking about in celebrating this Juneteenth holiday,” said Thomas Parham, president of the Dominguez Hills campus, located south of Los Angeles. “I want us to start with the fact that there is a lot of folk who look at diversity, equity and inclusion in the context of demographics … we kind of check the boxes and say we’re making diversity progress.”

“The question we want people to interrogate is, given these demographics, how have the policies and practices of our institutions and agencies changed?” he said.

People who spend time on campuses are seeing more people from different ethnic, racial or religious backgrounds, but policies and practices remain the same, Harper said.

“Until we do right by Black people, everything that we do in the name of racial justice will fail.  It will be incomplete,” Harper said.

“Even when we get Black people in the system, you don’t feel like you are able to be Black, so you don’t lean into your authentic self that will allow you to have the greatest benefit for Black students,” Bush said, adding that the California Master Plan for Higher Education needs to be redesigned to more closely improve education for Black people.

During the symposium, Secretary of State Shirley Weber, who started her career as a professor at San Diego State University, said as a college graduate, she never thought she would be fighting the same battles for education and voting rights that her grandfather did.

“Juneteenth never stood as a celebration but rather as a stark reminder of our country’s continual struggle to have its civil rights laws and edicts align with the action of providing the freedom, the opportunity and social justice mandated,” she said, adding that educators must better prepare citizens of their role in understanding our democracy.

“It is not OK when only 37% of the population votes over the last two years,” Weber said.

Weber, who pushed for ethnic studies requirements across the state’s higher education sectors, and was an advocate of eliminating standardized testing, said she told Gov. Gavin Newsom that if he wants to fight institutional racism the first place to start is the “ivory tower” of academia.

Other than the state’s community college system, the CSU reaches nearly every student in the state, Weber said. And with that power, the system has a “unique opportunity to push forward, not with the same old rules and regulations that we’ve had for years to produce the same old folks, but for so many who are left behind and left out.”

The system also has a responsibility to the K-12 system, as the largest trainer of future teachers and educators, Weber said, adding that California has the fifth-largest economy in the world but routinely ranks in the 40s and 50s for K-12 education and funding.

“That is embarrassing,” she said. “I deal with members in the Assembly that won’t put their own children in public schools. Why? Because they want them to be successful. That is a reality we have to face.”

Parham said there’s no one solution to solve the issues or problems the symposium addressed, but he hopes people across the CSU will really examine their own campuses and policies and make intentional improvements.

“How can the system, the largest system of public higher education in all of America … develop programs that massively assert the dignity, worth and humanity of African-descent people, staff, faculty, students?” he asked.