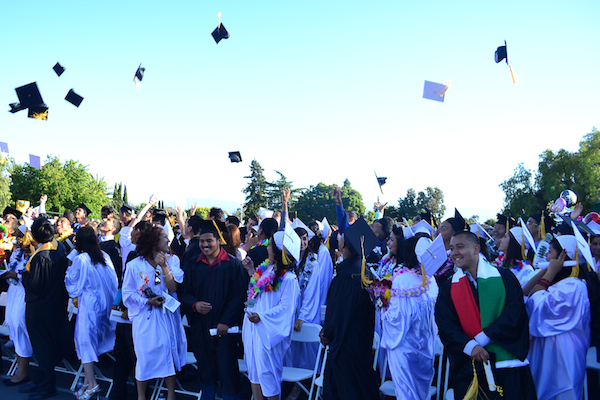 72% of Latino undergraduates attend community college, but only 2% transfer within two years

The number of students of Latino descent who are applying, attending, and graduating from public colleges and universities in the state has increased in recent years, but more needs to be done, according to a report released Tuesday.

In a Campaign for College Opportunity report, the number of Latinos who identify as male are graduating within four years from the California State University system has doubled over the past five years from 9% to 18% and the corresponding number of females from 15% to 29%. And in 2021, for the first time, admission rates for the University of California system from these students, identified as “Latinx” in the report, are projected to exceed those of white students.

The report, entitled “The State of Higher Education for Latinx Californians,” also shows that the number of Latinos in the workforce with academic degrees increased steadily over the past 13 years, that college attendance among Latino Californians has risen over the past decade, and that the number of these students with high school diplomas or similar credentials has increased in the same time frame.ina students attending and graduating from college does not yet reflect the state’s population.

While the increases are noteworthy, the number of people of Latino descent comprise 39% of the state’s population and 43% of all undergraduate students attending community college and public universities in California, making them the single largest racial and ethnic group in the state.

Yet only 14% of those adults in the state have a bachelor’s degree, comprising just 1-in 4 students in the entire University of California system, according to the report. What’s more, half of adults who identify as being of Latino descent who have attended college do not earn a degree.

“In a state where Latinx residents are the largest ethnic group, and where 48 percent of 18-to-24-year old residents are Latinx, an undergraduate population that contains at least 25 percent Latinx students at every campus should be the norm,” the report authors wrote.

The report states various reasons for these barriers, such as high poverty rates and a high number of first-generation students who may have less support and guidance from family members as they go through college.

“Attending college was such a big deal for me since I was the first in my family to attend, graduate, and further my education,” said Lizbeth Anahi Ibarra, who was quoted in the report. She grew up in South Central Los Angeles and experienced homelessness during high school. “Through my UC experience, especially as a Latina, I quickly learned that it was important for me to figure out how to navigate a system and find support from people who understood me.”

Some recommendations from the report authors to continue improving representation at institutions of higher education include making required courses known as  A-G the default curriculum in California high schools. Students who have not fulfilled all A-G requirements are ineligible for admission to the 23 campuses of CSU and the nine undergraduate campuses of UC.

They also recommend that college leaders, such as governing bodies and presidents, commit to “identifying, hiring, retaining, and promoting Latinx faculty” at the state’s public colleges and universities. The report also documents low rates of faculty from Latino descent at the state’s three largest university and college systems.

During the 2018-2019 school year, for example, only 16% of faculty at the California Community Colleges were Latino even as students who identify similarly make up 73% of the student population in the system.

During the same school year, there were less than 1,000 tenured or tenure-track faculty from Latino descent in the California State University System.

And at the University of California, there were only 661 full-time faculty of a total of 18,863.

“This lack of faculty diversity hurts students of all races and ethnicities, depriving them of exposure to a diversity that reflects the state—and world— beyond their campuses,” the authors wrote.

According to the report, Latinx Californians who were born in the United States are twice as likely to hold a college degree than those who are born elsewhere, and they are also more likely to hold a high school diploma.

The report’s distinction is clear: These students attending college in California have made immense progress in accessing higher education, but “there are still disturbing gaps” by race/ethnicity and gender.  The report also notes they have one of the highest rates of leaving college without a degree.

“Being Latino in the U.S. often has us choose between the importance of education or work… At one point, I did consider dropping out because of how lost I felt, but it was my peers and faculty who really made the experience worthwhile and memorable,” Hedrick K. Flores Del Cid, who attended Cal State Dominguez Hills, shared in the report. “I succeeded at CSUDH because of my support system on and off-campus.

The report puts a spotlight on the 116-campus California Community College system where the majority of Latino students begin their higher education. Yet, only 2% transfer within two years; 16% after four years and 32% after six years.  “A primary reason that Latinx Californians have lower rates of attaining a bachelor’s degree is a direct result of a broken transfer process,” the report concludes.

The recommendations include support for reforms that ensure “equitable placement” of students in for-credit college-level English and math courses with support so the students can succeed. The report also recommends identifying strategies for “intentionally closing racial/ethnic and gender gaps in enrollment and completion to degree, certificate, and transfer.”