Gov. Newsom touts California as 'getting kids back in the classroom' in State of the State speech 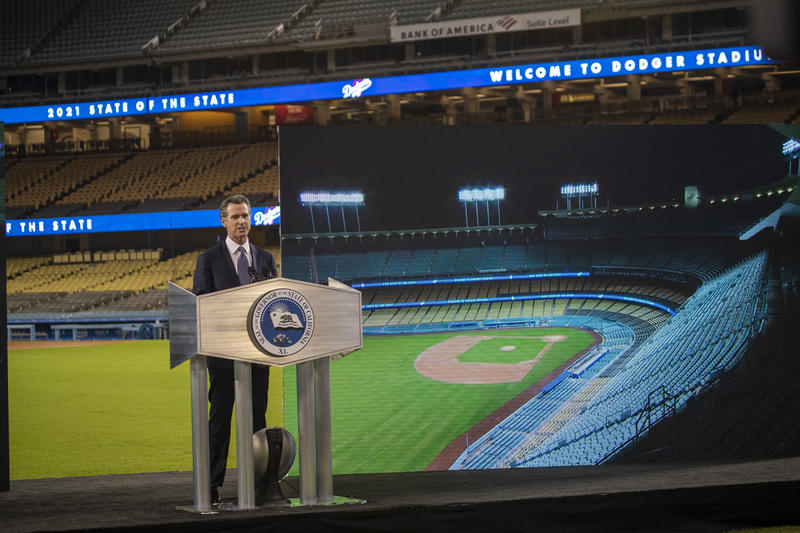 Credit: Allen J. Schaben/Los Angeles Times/Polaris
Gov. Gavin Newsom delivers his third State of the State address to the Legislature and public virtually from an empty Dodger Stadium in Los Angeles on March 9, 2021. There is no in-person audience at the outdoor location and public health guidelines are strictly observed.

Credit: Allen J. Schaben/Los Angeles Times/Polaris
Gov. Gavin Newsom delivers his third State of the State address to the Legislature and public virtually from an empty Dodger Stadium in Los Angeles on March 9, 2021. There is no in-person audience at the outdoor location and public health guidelines are strictly observed.

As the Covid-19 pandemic continues to shape California in multiple ways, Gov. Gavin Newsom said Tuesday night he wouldn’t be satisfied “until everybody is back in school” and pledged to invest record amounts in education this year.

In his third State of the State speech, delivered in an eerily vacant Dodger Stadium, now being used as a mass vaccination site, Newsom said that 7,000 of California’s more than 10,000 schools are either opening or planning to open in April.

“There’s nothing more foundational to an equitable society than getting our kids safely back into classrooms,” he said.

Newsom delivered the speech against the backdrop of a likely recall campaign and anger from a growing number of parents frustrated at the pace of school reopening in California — an issue that could play a part in the outcome of the campaign.

He also did not mention that while more schools are opening, the return to class in many districts is happening perilously close to the end of the school year and, in most cases, for only part of the school day, often in just the elementary grades.

“Look, we’ve made mistakes; I have made mistakes,” he said, without specifying the mistakes. “But we own them, learn from them, and never stop trying. After all, that is the California spirit.”

His only apparent reference to the recall campaign was to take a jab at “California critics who are promoting partisan power grabs and outdated prejudices.”

He said that since the pandemic started, “uncertainty has been the only thing we could be certain of.”  Now, Newsom said the state is providing certainty, including “certainty that we are getting kids back in the classroom.”

Almost exactly a year since most schools hurriedly closed for in-person instruction, by far the majority of students in California are still studying via distance learning. While many parents prefer that their children remain in distance learning, Newsom along with health officials have come under fire from a growing number of parent groups and others for setting too high a bar for schools to reopen and not pushing back sufficiently against teachers’ representatives who have set an even higher bar for teachers to return in many districts.

But Newsom argued Tuesday that massive progress has been made in opening schools for in-person instruction in recent months and weeks.  As recently as December, he said, many schools were contemplating what he called “an alarming decision” to give up on in-person instruction for the remainder of the year.

“In the few short months since — working together with parents, teachers, and school leaders — we have turned the conversation from whether to reopen, to when,” he said.

In many school districts, negotiations with teachers unions have proceeded at a tortuous pace, as school employees sought more safety protections. However, even in Los Angeles, a tentative agreement announced late Tuesday between the district and United Teachers Los Angeles pointed the way to school openings, albeit only beginning in when school employees are fully vaccinated.  For teachers who haven’t been vaccinated yet, that would put their return toward the end of April at the earliest.

As a parent of four young children, Newsom said he understood why parents are frustrated with what he called the “fatigue of what my youngest son calls Zoom school” and “the loneliness of missing their friends.”

He referred to the $6.6 billion just approved by the Legislature in emergency spending to invest in schools, and said that in the first week of his plan to reserve 10% of all vaccines for teachers and school employees, some 210,000 people have already been vaccinated.

“Imagine having to give a State of the State speech at a time when California is embroiled in a pandemic,” he told EdSource.

Thurmond said “it seems every district is trying to open to make the most of the time that’s left for in-person instruction.”  At the same time, he said he recognized that while there is optimism, there is also frustration.

“This is the anniversary of the most difficult year of our lifetime,” he said. “We are not in a position to celebrate, but there is reason for hope.”

State Board of Education Linda Darling-Hammond echoed Thurmond’s comments, saying “momentum is building across California for the safe return of students, teachers and staff to the classrooms they have so sorely missed.” She pointed to the recent pact announced between L.A. Unified and its teachers as especially significant.

She credited Gov. Newsom for making a “bold commitment” to ensuring that schools have the resources to surround students with the social-emotional, mental health and academic support they will need to thrive in a post-pandemic world.”

Expressing optimism about the future, she said “there will be many joyful days ahead as children and educators come back together in person once again.”

Open Schools California, the parent group pushing for schools to reopen immediately, was less positive.  The group issued a statement “applauding Gov. Newsom for reducing the COVID-19 daily case rate and rolling out one of the most effective vaccine distribution programs in the world.”

But it also said “there is absolutely no reason not to reopen every school, for five full days, now for all grades. Science says it’s safe to reopen. We need Gov. Newsom to act today by executive action, just as many of his peers have done, and send millions of California children back to school immediately.”

In his only reference to higher education in his address, Newsom pointed out that California has more scientists, engineers, researchers and Nobel laureates than any other state. “To keep this conveyor belt of talent moving, we will keep on investing in UC, CSU and community colleges,” he said.

Education was just one of the issues Newsom addressed in his speech. He spent much of the address describing what California has done to stem the pandemic, how California has vaccinated more people than any other state, and why, despite the more than 50,000 people who have lost their lives to the virus, the death rate in the state is lower than most other states.

He also referred to California’s efforts to deal with the homeless crisis: “While we acted swiftly during this pandemic, we are mindful that these tent cities on our sidewalks and the encampments along our freeways simply remain unacceptable.”

For a full transcript of Gov. Newsom’s third State of the State speech, go here.