A look back at Austin Beutner's tenure as LA Unified superintendent 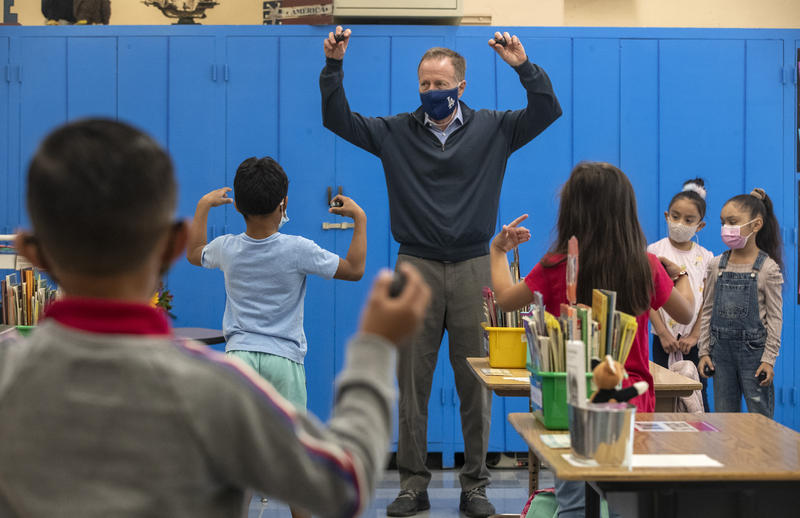 Austin Beutner, now in his final day as superintendent of the nation’s second-largest school district, has been alternately praised, denounced and, finally, thanked for his three years as a “crisis manager.”

From the get-go, the Los Angeles Unified school board’s decision to hire Beutner in May 2018 was controversial. He had a background in business, investment banking, politics and nonprofit leadership but no experience leading a school, district or classroom.

He is the son of immigrant parents, like many of the students attending L.A. Unified schools. But he made his fortune in the private-sector finance world, unlike most of the families whose children attend the school district he has led. At the state’s largest school district, encompassing over 700 square miles across a culturally diverse county, nearly 80% of families live in poverty.

The district’s own board of education was divided when he was hired on a 5-2 vote.

Today, he leaves the position after leading the district of over 650,000 students through a historic teacher strike, a fiscal crisis and a global pandemic. And he leaves one week after the school board approved a record $20 billion budget for the 2021-22 school year.

“He was in many ways a crisis superintendent,” said Myrna Castrejón, president and executive director of the California Charter Schools Association.

Beutner began his superintendency in May 2018 at a time when the school district predicted it would be placed under state control within two years due to increasingly weakening finances. The district’s fiscal state was often given as a critical reason for hiring a superintendent with a background in business and investment banking.

“Our financial challenge is real, and it has the potential to devastate this district if we don’t take urgent action; Austin Beutner is well-prepared to address the fiscal crisis we are facing and put us on a more sustainable path,” Kelly Gonez, the current school board president, said at the time of his hiring.

While Beutner previously served on an L.A. Unified task force and founded a nonprofit that offers free eye exams and eyeglasses to children, his lack of direct experience in leading a school or school district was a sore point from the onset of his three-year tenure.

In the same statement regarding Beutner’s hiring, Gonez added: “His limited educational background is a significant issue, and I fully expect him to work with the board and our talented district leaders to fill in those gaps to the extent possible.”

One of his initial proposals required working closely with the board and other key players. He sought to decentralize the district from a single, central headquarters into 44 teams, each of them responsible for addressing the needs of the communities in which they are located. The teams, proposed in 2018 and rolled out in 2020, are called Communities of Schools.

The initiative and Beutner’s ability to work closely with the school board to see it through are credited by some as part of his legacy as superintendent.

“Throughout his tenure I think our advocacy efforts in Sacramento were more successful than they had been for some time, we made progress in decentralizing the District into smaller ‘Communities of Schools,’ reined in some of our long-term financial liabilities to put more resources into classrooms, and piloted promising early literacy efforts that we will continue to grow,” said Nick Melvoin, one of seven L.A. Unified board members.

With Beutner less than a year into the job, the district’s teachers went on strike for the first time since 1989. The dispute was over class sizes, salaries and staffing levels.

In the middle of negotiations, the district said its “financial situation is simply not sustainable. Unless something changes, Los Angeles Unified will be insolvent by 2021 when it will have depleted the $1.8 billion reserve.”

The union, however, contended that the district was exaggerating its fiscal woes in an effort to undermine union demands and tagged Beutner as a superintendent who promoted “secrecy, wealth, and privilege”. After a week on strike, the union and the district reached an agreement and teachers returned to the classroom.

Working relations with the district’s unions remained contentious after the strike. Over two years later, however, Beutner indicated that the relationship between the district and the unions representing its members was in better shape.

“You build trust by doing; it’s not the saying, it’s the doing,” Beutner said. “And I know that we’ve better relationships with our labor partners than we’ve had in a long, long time.”

About a year after the strike and negotiations were resolved, a global pandemic arrived. Beutner was swiftly granted emergency authorization powers, allowing him to fast-track decisions that normally would require board approval. In the past year, he launched several programs as a response to the pandemic: Covid-19 testing, meal distributions, Covid-19 vaccinations.

Some have praised Beutner’s decision-making in the face of an unexpected challenge for which the long-term impacts and consequences were unknown in its early days.

“Not every leader is suited to every moment,” said charter school association President Castrejón. “I think that Los Angeles was really fortunate to have Austin at the helm in this moment through the pandemic because he was able to really sort of cut through what the normal lanes are for educators.”

Others have remained concerned that his decisions, particularly those regarding distance learning, may exacerbate the long-term impacts of the pandemic.

During the fall, a class-action lawsuit filed against the school district alleged that L.A. Unified’s plan for distance learning was failing to provide students with an education that meets the requirements of California’s state constitution by offering less instructional time than other large school districts. Much of the criticism in the lawsuit was placed on distance learning agreements reached between the district and the teachers’ union.

“At bottom, the distance learning side letter agreements negotiated by the LAUSD and UTLA have violated students’ fundamental right to basic educational equality and disproportionately harmed low-income, Black, and Latino students,” reads a recent demand letter from the plaintiffs. “The plainly deficient terms of those agreements, as well as the resulting declines in student attendance, grades, and assessment scores, clearly establish that the District has failed to provide its students with the education they deserve in their time of greatest need.”

A preliminary injunction hearing is expected soon, according to the plaintiffs. The district budget, they added, “fails to invest in and guarantee students the additional instructional time that the case says and the district has said that students need to recover.”

Plus, amid the pandemic response, Beutner has grappled with responding to long-standing concerns from a coalition of students, families and community members regarding the presence of police on school campuses and issues of equity for the district’s Black students. The coalition includes Students Deserve, InnerCity Struggle, Community Coalition, among others.

As Beutner presented his proposed budget for L.A. Unified last year, the coalition demanded that a portion of the school police budget be redirected toward programs focused on meeting the needs of Black students. After multiple board meetings, during which the coalition consistently provided public comment, the school police budget was cut by $25 million by way of an amendment added by some board members to the superintendent’s budget.

“There have been some positive things that have happened, but they’ve largely happened because students, parents, teachers, community members have fought for them and not because Austin Beutner thought them up or thought that they were good ideas,” said Joseph Williams, executive director of Students Deserve. “What we saw is that Superintendent Beutner blocked over and over and over again policy changes that were demanded by the community.”

As such, some community members, including Williams, see Beutner’s departure as an opportunity for the school board to appoint a successor with “a viewpoint of equity.”

Some of the challenges that Beutner faced, said board member Melvoin, “were anticipated, others were not, and there were fires that needed to be put out pretty much from day one — including literal wildfires that affected our school communities.”

And while no superintendency can be fully predictable, some, like charter school association President Castrejón, referred to Beutner’s position as a “crisis superintendency.”

“He’s lived through three years of crisis management that placed incredibly high and visible demands on Austin,” she added.

When asked how he weathered the crises and maintained relationships with other key players in the district, he said it came down to trust.

“I’ve worked alongside the board as one voice to talk about where we want to go and how we get there,” Beutner said. “When you have seven board members all going in different directions or our school district and their labor partners are not aligned, it’s hard to make progress. But we are aligned.”

His advice to his successor includes keeping a strong focus on working on behalf of students and families.

“It’s easier to say than to do sometimes, but keep it short and sweet. Ignore the politics, focus on the kids,” he added. “Find the things that are working and try to accelerate the pace of progress.”

In a send-off during his final school board meeting last week, a few former critics joined in warmly celebrating his time as superintendent.

“We didn’t start out well, but I’ve changed my mind completely,” said board member Jackie Goldberg. “You were the right man, at the right time, for the right job, and you did it with such energy, indefatigable energy.”

While there’s no indication of what he might do next, Beutner has hinted that a next chapter will soon arrive for him.

“I don’t idle well … that’s not me as a person,” he said. “I’m sure the next chapter will be some way I think I can make a difference for others.”