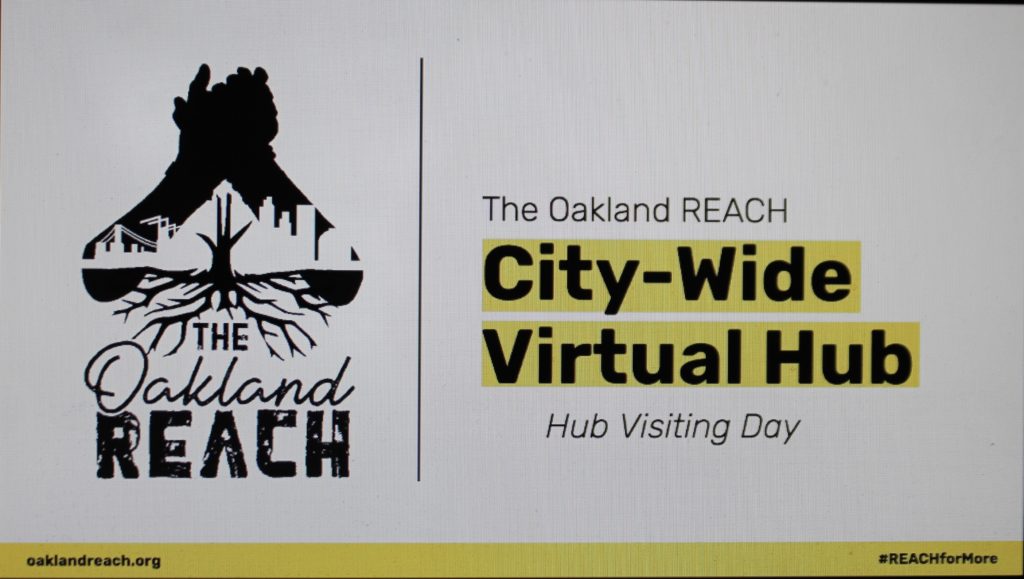 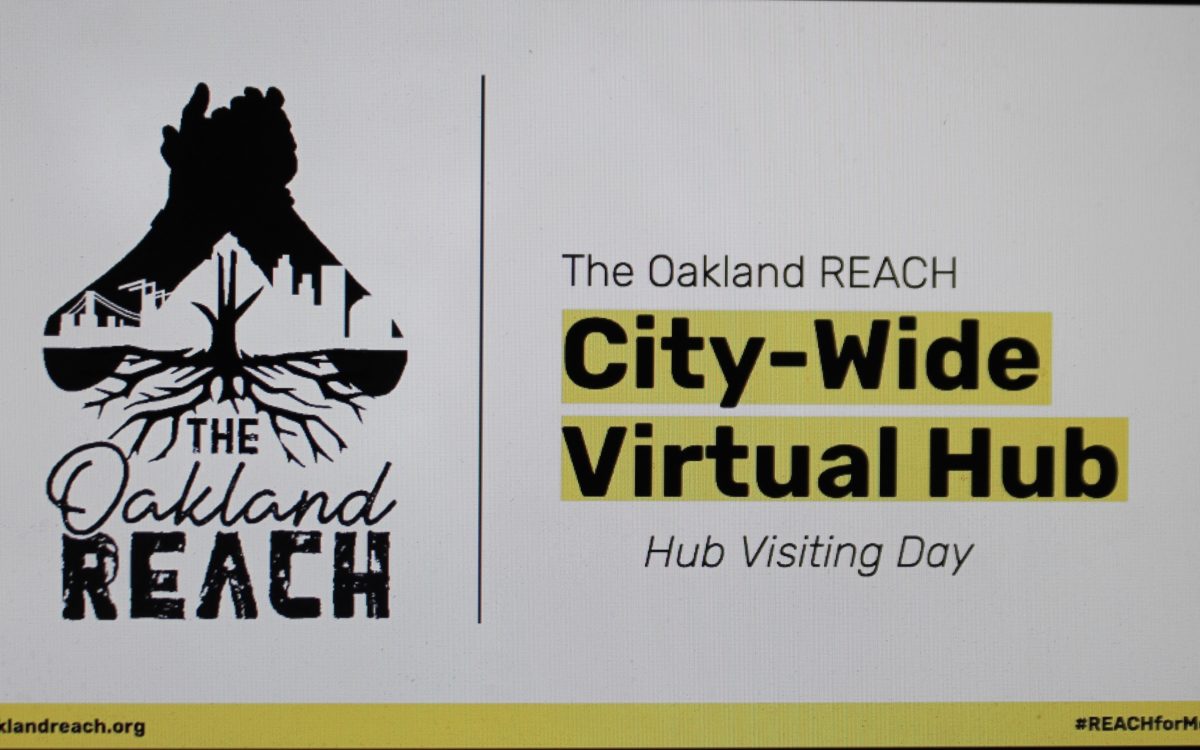 Oakland parents worried that their children may not get enough live instruction this fall may find help from a community group that provided summer instruction and is mapping out plans to offer a similar enrichment program this fall.

“We are fundraising and building at the same time,” said Lakisha Young, CEO of the nonprofit Oakland REACH organization, referring to the fall program.

Listen to EdSource podcast to hear Young talk about the Oakland REACH program.

Oakland REACH aims to help families who don’t have the resources to hire teachers for so-called “learning pods” to help their children reclaim what they missed last spring during distance learning and keep up with their classes this fall.

The group calls its program a “hub” because it is a central community resource that offers academic, as well as other resources in a “one-stop” virtual environment tailored to families’ needs, Young said.

She is surveying families to assess their needs, she says, while also fundraising and talking to other organizations that may be able to partner with them, as well as to people who are willing to volunteer. Young says she could use funds from their operating budget to launch the program in early September for interested families, including the approximately 180 students who participated in the summer program.

The scale of the fall program has not yet taken shape because it depends on how many families want to participate and the services they want, as well as partnerships with other groups and funding. “All of those things will come together,” Young said Monday.

The group is building on the positive feedback the program got this summer from the families who participated in the five-week online sessions taught by 14 credentialed teachers from Oakland Unified and city charter schools, Young said.

One feature of the program is to pay parents a stipend to help ensure that they are monitoring their children’s work. The program paid parents of students in the K-2 program $500 for the five-week summer program, and $250 to parents of students in grades 3-8. Young said she wants to continue providing stipends to parents in the 2020-21 school year as an incentive for them to participate in the program, as well as to help struggling families pay their bills during the Covid-19 pandemic.

The hub includes a family sustainability center, which distributed devices and internet access to families before the summer program began, as well as “family liaisons” who work with families to help set up email accounts, explain how to use Google Classroom and offer other support as needed. Young said the group plans to expand its family center to include workshops on topics families have said they would like more information about, such as student learning, healthy living, financial literacy and how to access resources to help pay for rent, utilities and food.

Many parents told program organizers that their children did not receive the same level of instruction or tech support from their district or charter schools after they closed in March and converted to distance learning.

The K-2 students in the summer program that ended Friday focused on literacy in the mornings and a martial arts program in the afternoon, while students in grades 3-8 worked on reading, writing and math in the mornings, followed by martial arts, cooking, science or creative writing. Phase 2 would likely supplement the instruction students receive from their district or charter schools, Young said, adding that the group will be mindful of how much screen time students are involved with each day.

“We want to be able to build a hybrid situation where families are feeling like they’re going to get quality,” Young said, adding that she’s hoping to partner with other groups locally, statewide or even nationally to offer one-on-one tutoring for students who are falling behind, as the program expands. Although distance learning classes in Oakland Unified are scheduled to start Monday, the district is still negotiating how it will deliver instruction with its teachers’ union and is still coordinating the distribution of computers and hotspots to families that need them, leaving parents worried about how children will be taught, Young said.

“We’re trying to make sure our families get access to instruction no matter what happens,” she said, explaining that the hub could offer an after-school type of program to families whose children will attend district or charter schools.

If some parents don’t believe Oakland schools are meeting their children’s needs, Young said the hub could also consider taking on the role of a “community school” similar to one operated by the Black Panthers decades ago to serve Oakland families. In a pandemic setting, the school would provide “wrap-around supports,” but in a distance learning environment. Other cities, she said, are also looking at the hub model with an interest in replicating it, although she acknowledges that the community school model is still in development.

Parents and grandparents whose children and grandchildren have benefited from the hub’s summer program say they look forward to continuing to participate in the fall, especially since they are not sure how much live instruction they will receive from their district or charter schools.

“I loved it,” said Carolyn Bims-Payne, whose sons Jaylen and Michael Lee — who are going into fourth and seventh grade — participated in the program. Bims-Payne said she was pleased by how engaged they were in the live virtual instruction, compared to the lack of live interaction they had with their district teachers after schools closed last spring.

“It’s a close community with the teachers, which is extremely important, and the smaller class sizes is vital as well,” Bims-Payne said, noting that her sons’ district classes included at least 28 students, while they had about 15 classmates in the hub. 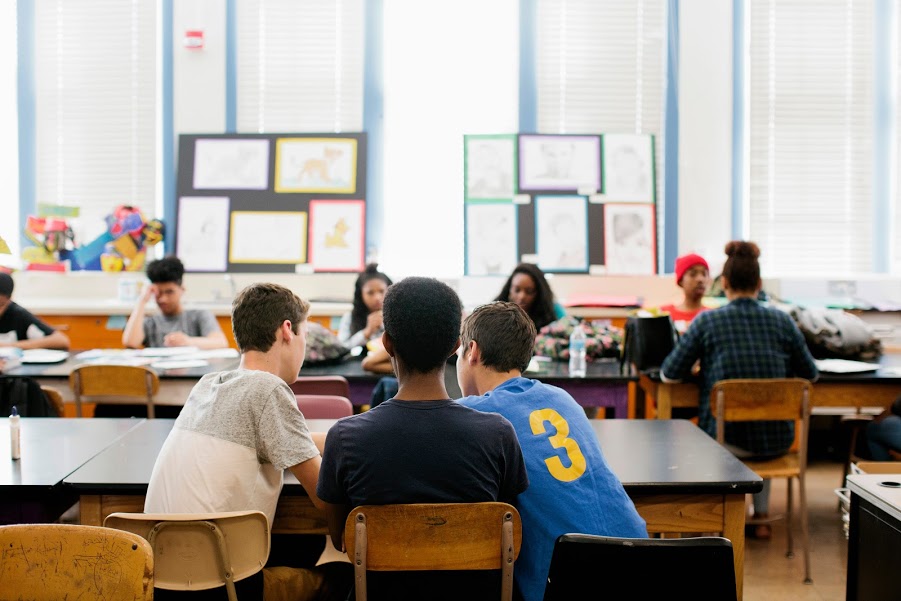 Even before the Covid-19 crisis, a stark achievement gap existed in Oakland, with students of color lagging white and Asian students.

Fewer than one-quarter of Black and Latino students in Oakland Unified met grade level standards in English language arts and math on 2018-19 state Smarter Balanced tests compared with half of Asian students and nearly three-fourths of white students.

Math scores were even lower, with just 12% of Black students and 17% of Latino students meeting the standards, compared with 49% of Asian students and 65% of white students. Add to that the fact that a similar percentage missed out on distance learning last spring, leaving many students with no instruction due to a variety of reasons, including lack of access to computers and the internet, or lack of communication from their schools. 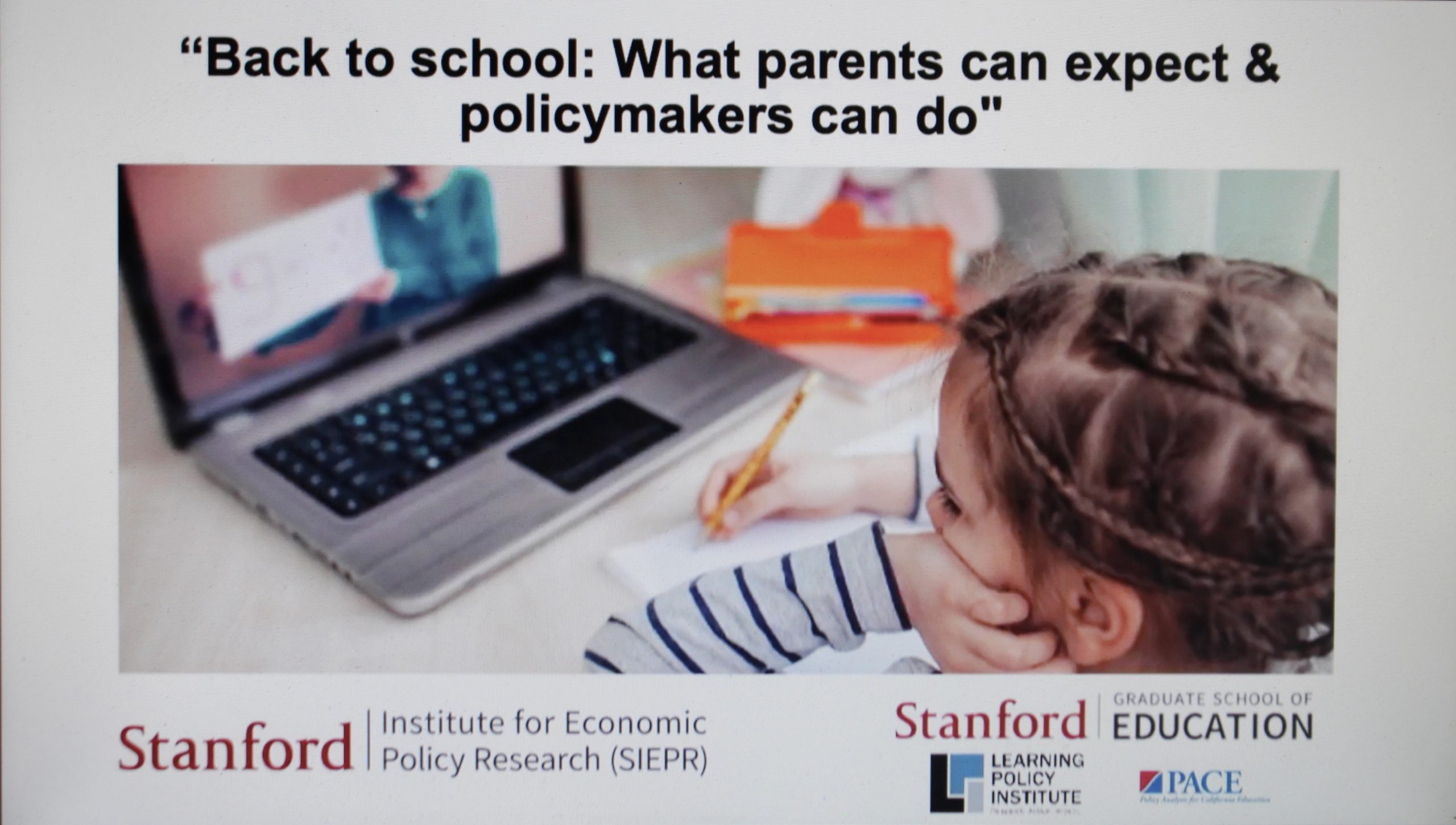 Young said the hub provided devices and hotspots to families that needed them as part of its budget for the summer program, which was about $300,000. More than $140,000 paid for teachers’ salaries, Young said, and the budget also covered 10 family liaisons.

Funding for the hub and the organization’s “REACH Relief Fund” to help families with other needs during the summer came from an array of major area foundations and donors, including many who contribute to the group’s annual budget of about $1.5 million, Young said. She hopes to build on this support and to explore new funding possibilities to expand the hub, including partnering with the district or tapping into state funding for educational resources, she added.

District school grandparent Guy Robinson said he wants his grandchildren to participate in the hub in the fall, based on the help they received during the summer. He said they had difficulties trying to navigate the online learning offered by their schools in the spring, in part due to lack of communication from the school. In contrast, the family liaison in the hub kept him connected and was ready to assist if he needed help. He said the hub has helped his grandchildren “become more responsible and more self-motivated,” and “to work independently.”

In a recent virtual hubclass, students in Dave Philhower’s fourth-grade English language arts class read and discussed an article about the life of the late civil rights icon, Rep. John Lewis and then worked on “quick writes” highlighting some main points. Philhower gently nudged students to add more details, such as mentioning Lewis’ role in the march from Selma to Montgomery or asking them for a “specific” example of a time when Lewis demonstrated that he was a hero.

Meanwhile, second-graders in Camille Gasoscos’ class learned to read, spell and write words such as saw, old, gold, cold, put and tan. Gasoscos held up the words written in large letters on strips of paper and asked each of her students to read and spell them, following her finger as she pointed to the letters.

Antoinette Howard, whose two grandchildren participated in the hub, said she felt involved because she sat with them and listened to the online lessons and watched their face-to-face interactions with teachers and other students.

Young said the key to the program’s success is that it was designed for Oakland families based on their needs. She said established educational systems, such as local and state agencies, should also focus more on what parents and students need.

“This pandemic has pushed really critical conversations in this educational system,” she said. “It really is sparking dialogue and innovation that I think is just long overdue.”