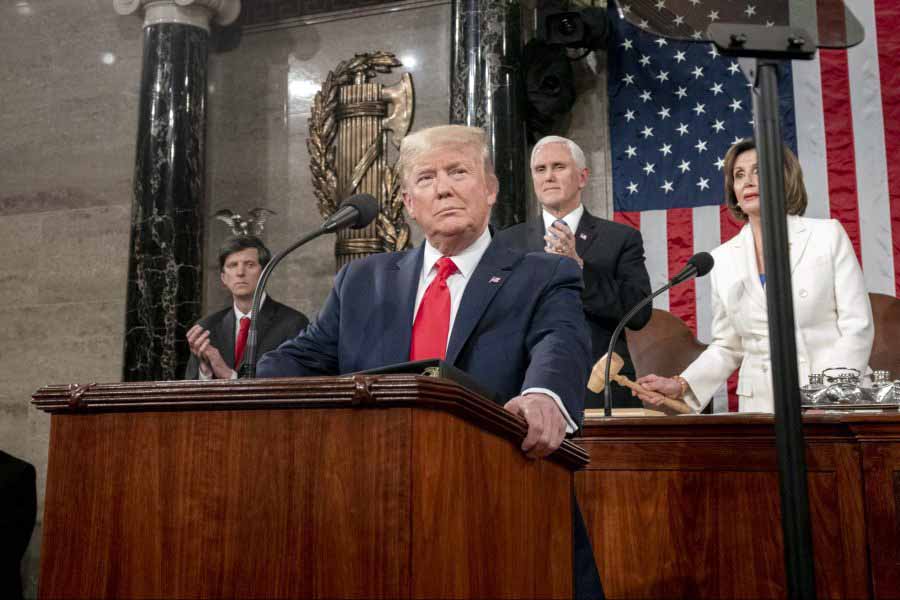 President calls on Congress to approve the Education Freedom Scholarships and Opportunities Act.

President Trump is trying once again to put the almost dormant issue of school choice, which had been a prominent issue in his election campaign, into circulation again — without any chance that it, or any variation of it, will emerge from Congress.

For the second year in a row, he used the State of the Union speech to revive the issue, devoting more time to it than in last year’s address. This time he called on Congress to approve the Education Freedom Scholarships and Opportunities Act authored by Sen. Ted Cruz, R-Texas, which would provide tax credits to individuals and businesses that made contributions to scholarship funds that could be used to underwrite tuition at private and parochial schools, among other things.

No child, he said, should be trapped in “failing government schools,” using the term used by many on the conservative right to disparage public schools.

“The president did not offer a serious plan to reverse the chronic underfunding of public education,” Scott said. “Instead, he touted a $5 billion private school voucher program that would function as a tax break for corporations and the wealthy. House Democrats will not waste time on proposals that undermine public education.”

In the presidential box in the House gallery was Philadelphia 4th-grader Janiyah Davis and her mother, Stephanie. Pointing to her amid applause, Trump said Janiyah had been denied a chance to go to a “school of her choice” because Pennsylvania Gov. Tom Wolf, a Democrat, had vetoed a proposed expansion of the state’s Opportunity Scholarship Tax Credit Program. The White House’s website claimed that she is on a waitlist of 50,000 students to get a scholarship through the program.

Trump’s charge was only partially true. Wolf had vetoed a bill that would have increased the available tax credits by $100 million from $160 million. Wolf, however, had approved legislation to increase funding for the program by a more modest $25 million, to $185 million.

Amid applause, Trump said that Janiyah’s “long wait is over. I can proudly announce tonight that an Opportunity Scholarship has become available, it’s going to you, and you will soon be heading to the school of your choice,” he said, without any indication of who would provide that scholarship, and how much it would be worth.

Not surprisingly, leaders of the nation’s largest teachers’ unions rejected Trump’s proposal. “Donald Trump once again put the agenda of Betsy DeVos, the least qualified Secretary of Education in U.S. history, front and center in his State of the Union by renewing his push to divert scarce funding from the public schools that 90 percent of students attend into private school voucher programs,” said Lily Eskelsen García, president of the National Education Association. Randi Weingarten, president of the American Federation of Teachers, blasted what she called Trump’s “antipathy for public education.”

Trump came to office calling for a $20 billion school choice program. Just weeks before the 2016 presidential election, he promised a program that would provide vouchers to low-income children to attend whatever schools they chose — charters, private schools or public schools — without giving any indication of where those funds would come from. He said that within 100 days of being elected, he would introduce what he called the School Choice and Opportunity Act. No such legislation was introduced.

In fact, this is a notable item on Trump’s agenda on which he has gotten absolutely no traction, at least on a federal level. The once-rapid growth rate of charter schools has continued to decline, as have private school enrollments. There are no figures on enrollments in homeschooling and other school choice options since his election.

At least in part because of the availability of charter schools in the state, private school enrollments have plummeted, from a high of about 648,000 two decades ago to about 480,000 last year.

On other education fronts, Trump called on Congress “to support our students and back my plan to offer vocational and technical education in every single high school in America.” He also pledged “that every citizen can have access to high-speed internet service, including and especially in rural America” and touted his administration’s support for what he described as “record and permanent funding” of historically black colleges and universities.

As EdSource has reported, there are areas throughout California, but especially in rural communities, where teachers do not give homework because students lack access to internet service at home.

He also raised the perennial issue of school prayer, saying it should be allowed under the U.S. Constitution. “We cherish religion,” he said, in remarks likely to appeal to evangelical Christian supporters who constitute an important segment of his electoral base. “We lift our voices in prayer, and we raise our sights to the glory of God.”

The following are President Trump’s remarks on education in his 2020 State of the Union address:

The next step forward in building an inclusive society is making sure that every young American gets a great education and the opportunity to achieve the American Dream. Yet, for too long, countless American children have been trapped in failing government schools. To rescue these students, 18 states have created school choice in the form of Opportunity Scholarships. The programs are so popular that tens of thousands of students remain on waiting lists. One of those students is Janiyah Davis, a fourth-grader from Philadelphia. Janiyah’s mom, Stephanie, is a single parent. She would do anything to give her daughter a better future. But last year, that future was put further out of reach when Pennsylvania’s Governor vetoed legislation to expand school choice for 50,000 children.
Janiyah and Stephanie are in the gallery this evening. But there is more to their story. Janiyah, I am pleased to inform you that your long wait is over. I can proudly announce tonight that an Opportunity Scholarship has become available, it is going to you, and you will soon be heading to the school of your choice!
Now, I call on the Congress to give 1 million American children the same opportunity Janiyah has just received. Pass the Education Freedom Scholarships and Opportunity Act — because no parent should be forced to send their child to a failing government school.
—-
My budget also contains an exciting vision for our nation’s high schools. Tonight, I ask the Congress to support our students and back my plan to offer vocational and technical education in every single high school in America.
To expand equal opportunity, I am also proud that we achieved record and permanent funding for our nation’s historically black colleges and universities.
—-
My administration is also defending religious liberty, and that includes the constitutional right to pray in public schools. In America, we do not punish prayer. We do not tear down crosses. We do not ban symbols of faith. We do not muzzle preachers and pastors. In America, we celebrate faith. We cherish religion. We lift our voices in prayer, and we raise our sights to the glory of God.
—-
I’m also committed to ensuring that every citizen can have access to high-speed Internet, including and especially in rural America.
For a full transcript of the speech, go here.