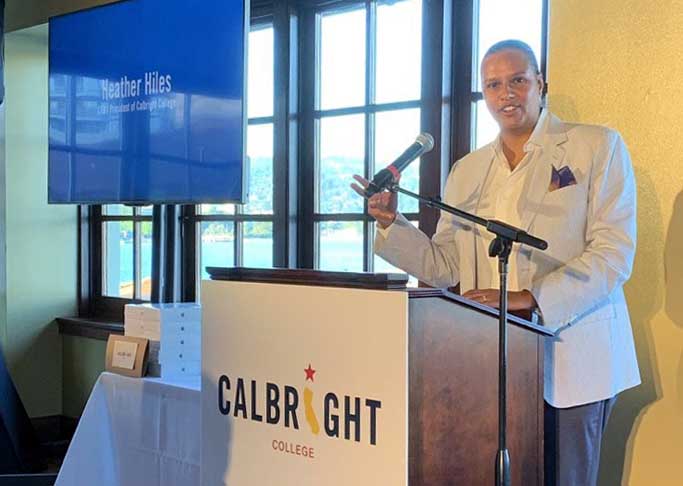 Former president of California's online community college abruptly left post that paid her a salary of $385,000.

Heather Hiles, president of California’s first online two-year institution — Calbright College — will receive a lump sum payment of about $32,000 and be paid through the end of March as part of her separation agreement after she resigned Monday.

Hiles suddenly resigned after less than one year on the job. Calbright, the state’s 115th community college, opened in October.

Under the separation agreement, released by the college on Thursday, Hiles remains on paid administrative leave through March 31 and will continue to receive her regular salary and health benefits until that time. She will additionally receive a “lump sum equal to one month salary, subject to all normal payroll deductions, on or before March 31.”

Sakari Morrison, a Calbright spokeswoman, declined to comment on the agreement, saying “it is a personnel matter.”

When she was hired last February, Hiles received a four-year contract with a base salary of $385,000 plus ongoing cost of living adjustments. That contract also included yearly performance bonuses up to $10,000 in the first year that could have increased to as much as $40,000 in the fourth year. It also included a $10,000 annual vehicle allowance.

Taylor Huckaby, the college’s communications director, said Monday that it was Hiles’ decision to step down as president. The board of trustees unanimously accepted her resignation. Meanwhile, the college will be led by Calbright’s chief operating officer, Derek Gordon; chief technology officer Ari-Bader-Natal; and Nicolas Schweizer, chief finance and administrative officer. The board will select an interim chief executive officer and president until Hiles’ permanent replacement is hired.

Hiles’ time with Calbright has been rocky since last March when she pushed to grant a no-bid contract of about $500,000 to a politically connected executive recruiter, who was described as Hiles’ friend. Community college faculty groups have frequently criticized the controversial college since former Gov. Jerry Brown first proposed it. The California Federation of Teachers, the union representing 30,000 community college employees, threatened to sue the college for failing, in its view, to meet goals outlined by the Legislature. It also criticized the lack of transparency at Calbright and how much money the college and Hiles have received.

The fully online and free community college receives about $20 million annually for operating costs. It has enrolled 449 students as of Jan. 1.

Brown envisioned the college as serving “stranded workers,” or adults between the ages of 25 and 34 who are unemployed, underemployed or working part-time. Although that is the focus, any student can enroll in Calbright College.

The college offers three certificate programs in information technology, medical coding and cybersecurity, all of which are self-paced and designed to be completed in under a year.