With the coronavirus out of control in California, and the health system reaching a breaking point, momentum toward opening more public schools for in-person instruction has largely come to a halt.

Some districts already offering in-person instruction are returning to distance learning, if only temporarily, as school leaders try to get through the holiday season and weather the full force of the pandemic’s spread.

That’s according to an EdSource survey of the state’s 58 county offices of education conducted between Dec. 7 and Dec. 16. At the time, almost all counties in the state had moved onto the Tier One “purple” list, effectively prohibiting schools not already offering in-person instruction from doing so.

At the end of October, when EdSource conducted a similar survey, schools were reopening for face-to-face instruction at an accelerating pace, although the vast majority of students in California were still learning through online instruction.

Now, even more students are learning via online instruction than in October, with no clear estimate of when they will be able to return to school. That is happening while parents, teachers and education leaders generally, including State Superintendent of Public Instruction Tony Thurmond, continue to worry that the distance learning regimen is contributing to significant learning loss, especially among the state’s most vulnerable students.

The EdSource survey sought information on districts offering instruction to students attending regular classes, not special education classes, learning labs or support centers. It did not attempt to tally the extent to which districts are offering face-to-face instruction to small groups of students with special needs, such as those in special education, English learners and homeless or foster children. Those figures are generally just not available.

Other findings of the EdSource’s survey, which involved a questionnaire sent to all county offices of education, supplemented by telephone interviews and online research, include the following:

Long Beach Unified officials, for example, say students will stay in distance learning mode at least until March 1, instead of its earlier tentative back-to-school date of Jan. 28 for some students. Further south near the Mexican border, South Bay Union School District officials say they will open for hybrid instruction on April 5, after students return from spring break. 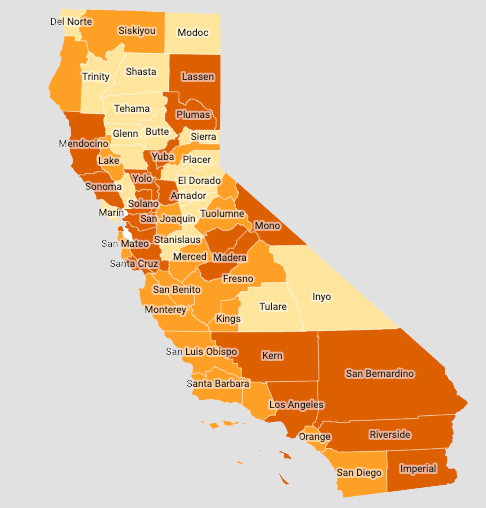 View our interactive map displaying the kind of instruction offered by all or most public school districts in a particular county — whether via in-person or distance learning, or a mixture of the two — as of Dec. 16, 2020.

Even districts trying to move forward with in-person instruction are having to cope with divisions on the issue within their own communities — notably in San Dieguito Union High School District in San Diego County — with some parents and students pushing to reopen, and others vehemently opposed.

Running through all the conflicts has been opposition from many teachers and their unions who have been insisting on greater safety precautions than many districts are currently able or willing to implement. In the San Dieguito district, the California Teachers Association has filed suit against the district to block its reopening plans, which the union alleges violate state regulations.

Following recommendations of advisory panels in California and nationally, teachers and other school employees will likely be among those next in line to receive vaccines, after emergency health workers and long-term care residents. But this prospect has yet to have any noticeable impact on districts’ plans for opening or closing schools, because the recommendations have not been formalized and translated into policies, and there are still many unknowns as to when school staff will actually be vaccinated.

Getting a full picture of what is happening in schools across the state is extremely difficult. Only a handful of California’s 58 counties provide detailed information about each school in their counties. Humboldt County, Madera County and San Diego County have collected that information — showing that it is possible to do so.

Nor is the state tracking which schools are offer in-person support and instruction to small groups of 14 or fewer students with special needs, which they are allowed to do even if their counties are in the “purple” tier, based on guidance issued early in the pandemic.

Even in counties with all or most districts offering in-person instruction, not all students have returned to campus. That’s because in every district some parents have opted for their children to continue to study remotely. In many cases districts are offering in-person instruction only in the elementary and middle school grades. Research shows that high school students are more likely to be carriers of the virus and more susceptible to developing more serious symptoms; it is also difficult if not impossible to keep them in a single group and in the same classrooms during the school day.

For now, distance learning remains the primary mode of instruction for the majority of students in the state, even in counties like San Diego where many districts are offering some in-person instruction. Of the 982 public and private schools in the county, 385,000 students are learning via distance learning, according to the San Diego County Office of Education. That includes San Diego Unified, the largest district in the county. An additional 97,000 are receiving instruction in a mix of in-person and online instruction known as “hybrid” learning. Some 28,000 are learning full-time on school campuses.

Complicating the entire planning process for opening schools is the fact that it is impossible to predict the course of the pandemic over the next month or two. Currently, the crisis is only getting worse. In fact, it is likely the state will extend current stay-at-home orders due to expire at the end of December in all or most regions of the state, according to Dr. Mark Ghaly, the secretary of California Health and Human Services. That is likely to raise anxieties among school administrators and others in school communities as they grapple with whether and when to reopen.

Los Angeles Unified, with 1 in 10 of the state’s public school students, announced months ago that it would not open for in-person instruction unless it could implement a rigorous testing regimen, and other health safeguards. It still remains closed for in-person instruction. Since the county went into the purple tier, the district even sent home about 4,000 students with special needs that it was serving in tutoring and other programs.

This week Superintendent Austin Beutner affirmed that schools would not open after the winter break on Jan.11. “We’ll remain in online-only mode until community health conditions improve significantly,” he said.

In what he described as an “alarming” finding — and one with implications for other districts — he disclosed that 5% of adults and 10% of children who came to district Covid testing centers and who showed no symptoms, had tested positive for the virus.

“Think about that,” he said. “One in 10 children being tested at schools show no symptoms but have the virus. It’s clear we’re a long way from reopening schools with the level of virus this high.”