Los Angeles Unified enrollment dips below 600,000, a first in more than three decades 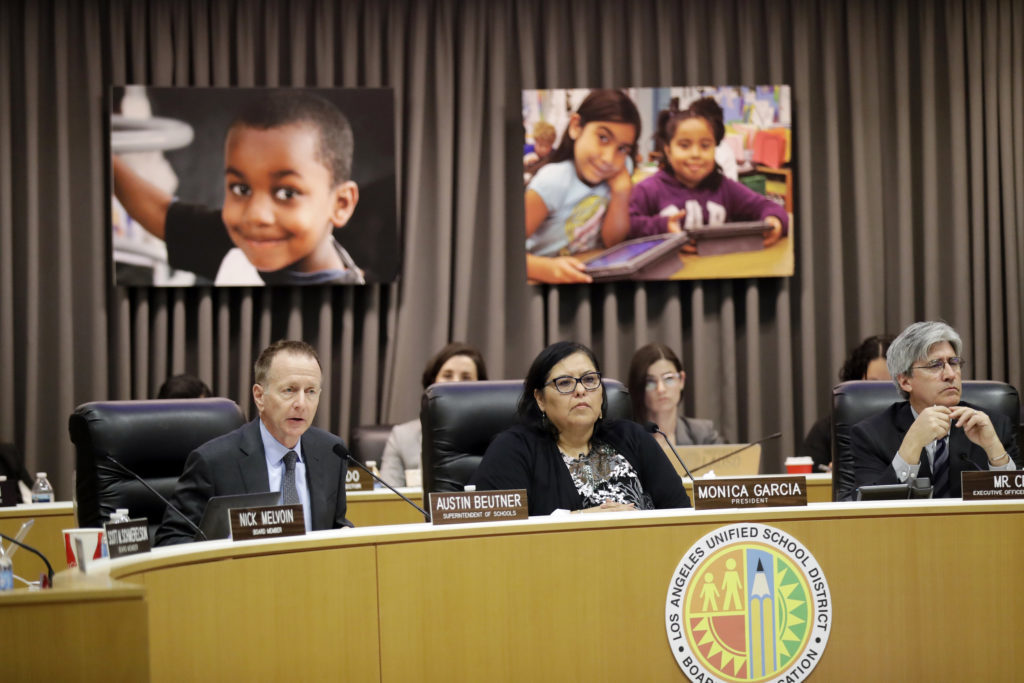 For the first time in more than three decades, the number of students in Los Angeles Unified has fallen below 600,000 students — the continuation of a long trend of declining enrollment that has significant implications for the financial health and staffing of the district.

The district is already facing an uncertain financial future amid the coronavirus pandemic, which Superintendent Austin Beutner estimates will bring LA Unified $200 million in unexpected expenses — including the cost of distributing millions of meals and ensuring that students will have access to distance learning. The pandemic also will likely lead to a drop in the state’s revenues that determine the district’s funding.

The continued declining enrollment has become a persistent challenge for the district, because schools receive funds from the state based mainly on their average daily attendance.

The district’s enrollment has declined each year since peaking at about 750,000 students in 2003, which experts mainly attribute to lower birth rates in the Los Angeles area and the higher cost of living in Los Angeles, forcing families to move to more affordable areas such as the Inland Empire, an area east of Los Angeles that includes parts of Riverside and San Bernardino counties.

“We’ve seen over the years a migration from the central part of Los Angeles to the peripheries as the cost of housing has skyrocketed,” said John Rogers, a professor of education at UCLA’s Graduate School of Education and Information Studies.

Statewide, out of a total student enrollment of just over 6.1 million, enrollments dipped by 23,000 students this year. That means that L.A. Unified, by far the state’s largest district, accounted for nearly half of enrollment declines statewide.

Beginning in 2013-14, the district’s eroding financial position has been masked by huge increases in supplemental and concentration grants intended to serve low income and English learner students through the Local Control Funding Formula. Each year these supplemental grants increased until the 2018-19 school year. Now the district will not see any further increases, and reductions in state funding as a result of declining enrollments will have a more noticeable impact.

Even as enrollment has declined, L.A. Unified has faced soaring pension costs, higher employee benefit costs, increased costs of special education, the impact of charter school enrollments within the district and additional hiring.

“You still have to pay for some of these things regardless of the number of kids you have. That’s the crux of the problem,” said Julie Marsh, a professor of education at the University of Southern California. “When we bring in COVID-19, that makes all of this even more dire.”

The district in recent years has been spending its reserves and the Los Angeles County Office of Education, which oversees LA Unified’s budget, has warned that the district is spending its savings at an unsustainable rate.

“We remain concerned that, if this trend of deficit spending continues as projected, it will lead to further deterioration of the Unrestricted General Fund balance, and will adversely affect the District’s ability to meet its financial obligations in future years,” wrote Patricia Smith, the L.A. County Office of Education’s chief financial officer, in a letter this month to L.A. Unified’s board president Richard Vladovic.

That letter was issued on April 10, ten days before the district revealed that it is facing $200 million in unfunded costs associated with the coronavirus pandemic.

L.A. Unified schools have been closed for in-person instruction since March 16 and will remain closed through the summer. During that time, the district’s unexpected costs have included providing meals to children and adults, distributing technology to students so they can continue learning at home and training teachers for virtual instruction. The district also expects it will need to spend an extra $50 million to provide a virtual summer school program.

On Monday, Beutner said local, state and federal governments will need to reimburse the district for those costs.

But how much government support the district could expect to receive remains unclear.

An important factor for districts like L.A.Unified will be whether Congress approves additional federal stimulus money and, if so, how much will be earmarked for education, said UCLA’s Rogers. Also uncertain is by how much California’s tax revenue will decline.

“Those two factors I think will be critical,” he said.

The L.A. County Office of Education has urged the district to prepare for a sharp decline in state revenues because of the pandemic. California “is anticipating a significant decline in revenues, and districts should be prepared to respond to the financial challenges that lie ahead accordingly,” Smith, the office’s chief financial officer, wrote in her letter to Vladovic this month.

“As the negative economic impact on State revenues becomes known, it will be critical that districts act quickly in evaluating and adjusting their current budget and multiyear projections to align with available resources to ensure fiscal solvency,” she added.

Pedro Noguera, another professor of education at UCLA’s Graduate School of Education and Information Studies, suggested that Beutner, with a background and connections in the financial sector, may be well-qualified to get the district through its financial challenges. Noguera said Beutner will have “to look at every possible source” for funding, from government to corporations to wealthy individuals.

“And I think that because of his ties to the private sector and his own wealth, that he’s a good person to try to form some strategic partnerships,” Noguera said.