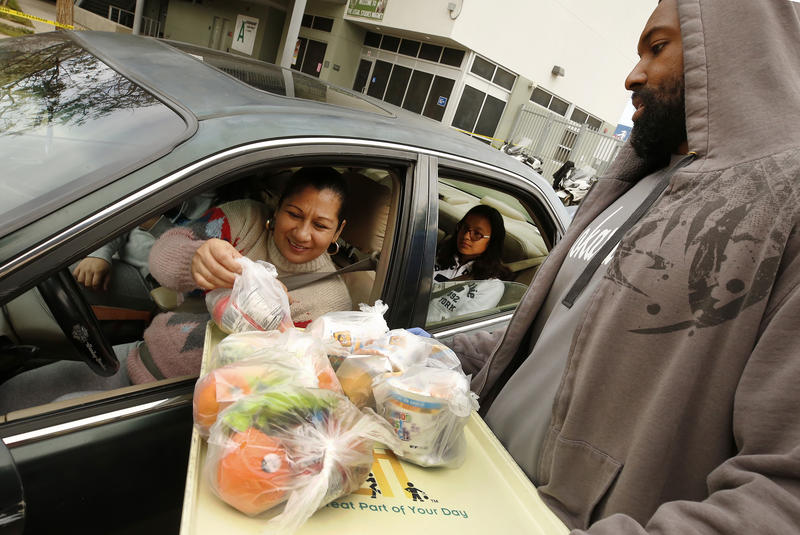 Los Angeles Unified faces about $200 million in unbudgeted costs, primarily to feed students and their families and to connect them to online learning for the remainder of the school year in response to the coronavirus pandemic, Superintendent Austin Beutner said Monday.

The budget hole is due to unexpected costs that include providing meals to students, spending on technology to address the digital divide and training teachers for instruction on online platforms, Beutner said during a televised speech Monday. He sounded a warning that LA Unified will need additional funding from local, state and federal governments to close the budget when the fiscal year ends on June 30 and to fund new costs related to the pandemic going into the next fiscal year.

“The Board of Education has been kept informed of these expenditures and are committed to making sure we help all students continue to learn and providing support to students and families most in need. All purchases have been made with every attempt to secure the best price possible given the circumstances,” Beutner said.

At the same time, LA Unified is planning to hire more reading and math teachers once in-person instruction resumes for elementary schools in an effort to help students make up for missed learning opportunities. The district has switched to distance learning for the rest of the school year and will continue with that type of instruction at least through the summer.

School may reopen for in-person instruction in the fall, but students may need to maintain social distancing to contain the virus spread.

“It may sound counter-intuitive to be talking about increased spending on education in the midst of looming state budget issues, but it’s necessary,” Beutner said. “Unless we’re prepared to sacrifice a generation of boys and girls who are counting on a great education as a path out of poverty.”

The district estimates it will incur about $390 million in unexpected costs and has so far identified about $190 million in funding to cover some of the expenses, leaving about $200 million in unbudgeted costs this year.

“It will take some time as well as public and political support to make sure we are properly reimbursed by local, state and federal government for these investments we are making in students and families,” Beutner said.

LA Unified’s meal distribution service is the largest contributor to its budget hole. The district has distributed 10 million meals to children and families since schools closed for in-person instruction in mid-March and expects to have $78 million in unbudgeted costs associated with providing those meals.

In addition to handing out meals to students, LA Unified has also supplied meals to anyone who comes to one of its dozens of grab-and-go food centers. “In these extraordinary times, we will help all who are in need and, in the absence of broader food relief efforts by the city or county, we have stepped up to help,” Beutner said.

To connect students to the internet at home, the district also plans to spend about $95 million on technology, including tablets and hotspot devices that allow students to connect to the internet. Bond funds will cover most of that investment, but an estimated $23 million remains in unbudgeted costs.

Beutner said Monday that it should be up to government agencies, such as the Federal Communications Commission at the federal level and the Public Utilities Commission at the state level, to address the digital divide. “But in the absence of action by others, we will address the issue and sort out the costs later,” he said.

He added that the district has an estimated $31 million in unbudgeted costs to provide instructional training to teachers on online platforms such as Schoology as well as an additional $50 million in extra costs for summer school. Beutner has said the district is planning to provide a more robust summer school program to help students catch up on lost learning.

About 90 percent of the district’s funding comes from the state, and Beutner noted that “in normal times,” California would pass a budget by June 30.

“We expect the state will delay the passage of a complete budget until later in the year and they will also delay the deadline for Local Control Accountability Plans school districts need to complete along with their budgets,” he said.

Beutner added that LA Unified’s Board of Education will meet in the coming weeks “to review these issues and make any final decisions about the budget for the coming school year as the state issues further guidance.”