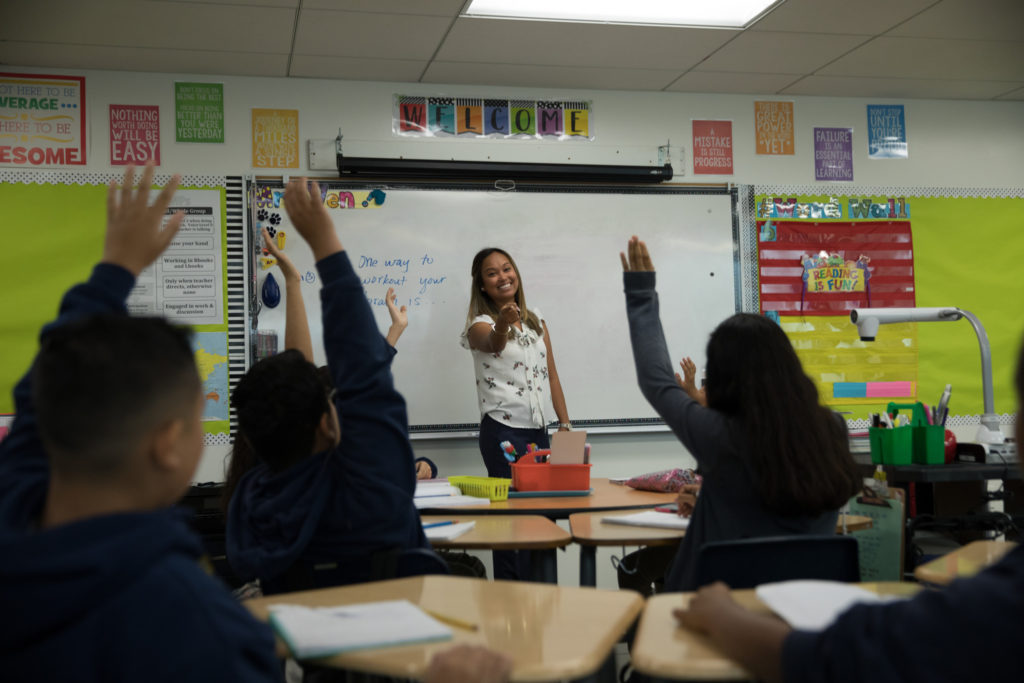 L.A. Unified's school board is expected this week to approve a policy detailing how the district will implement AB 1505.

With the upcoming school year already upended by the coronavirus pandemic, charter schools in Los Angeles are facing more uncertainty as they comply with a new state law.

California’s new law imposing greater restrictions on charter schools, which took effect last month, faces pushback from charter schools in the district that’s home to the largest number of charter schools in the state. At issue is a draft of a new 80-page policy detailing how Los Angeles Unified plans to implement the law. The policy will be in front of the school board for a vote on Tuesday.

L.A. Unified’s policy, which was developed by its charter school division and reviewed by the district’s general counsel, is likely to set the stage for how other districts across the state interpret the new law, Assembly Bill 1505. The law gives school boards more power to reject new charter schools and changes the process for renewing charter schools.

Cassy Horton, a vice president of the California Charter Schools Association, in an interview with EdSource called L.A. Unified’s policy “deeply concerning,” saying it threatens to essentially put a moratorium on new schools and close some existing schools. Horton and other charter school supporters dispute the district’s interpretation of the law, arguing that the policy would add restrictions that they say are not in line with the new law, such as allowing the school board to consider the facilities a charter school plans to use when deciding whether to approve it.

District leaders, however, say their policy is consistent with the law, which has ambiguities that leave it open to interpretation. For example, the law allows school boards to deny a petition for a new charter school if the school is “unlikely to serve the interests of the entire community” but doesn’t define in detail what constitutes community interests, leaving much discretion to school boards to make that determination.

“Language is very subjective nowadays. Unless you say you must do something, there are exceptions,” Richard Vladovic, president of the L.A. Unified school board, said at a recent board meeting. “But as I read the law and I read the proposed implementation, it followed the law.”

The policy is being praised by the California Teachers Association, the union that represents teachers across the state and has called for limiting charter school growth. The final version of AB 1505 was viewed as a compromise between the CTA and the California Charter Schools Association after Gov. Gavin Newsom’s staff negotiated for months with both groups.

L.A. Unified’s school board is expected to vote to approve the policy this week, but other key factors that will play a role in how the policy is ultimately implemented won’t be settled for months.

Two board seats, in Districts 3 and 7, are up for election this November and one of the biggest issues framing the races will be charter schools and how to handle efforts to expand school choice.

By next year, L.A. Unified and other districts will also likely get additional guidance from the California Department of Education, which is currently drafting regulations to help districts interpret and implement the law.

Disagreements over L.A. Unified’s policy may also be settled in the courts. Julie Marsh, a professor at the University of Southern California’s Rossier School of Education, said she has “thought all along that we will see litigation” sometime in the future.

“I think there’s plenty of opportunity for litigation down the line, whether it’s around being denied a petition based on fiscal impact and the way a district interprets that, whether it’s based on a disagreement with the way the district determined serving the interest of the community or whether it’s over a school getting denied renewal,” she said.

Erika Jones, a board member for the California Teachers Association and a teacher in Los Angeles, said she’s hopeful L.A. Unified will be able to limit the growth of charter schools under the district’s new policy.

“We can’t sit here and deny that L.A. Unified is oversaturated with charter growth,” Jones said. “To have the district be committed to holding themselves accountable to the community they’re serving, I think that’s important.”

With so many charter schools within L.A. Unified, the district essentially has a “dual school system” that puts district schools in competition with charter schools, according to board member Jackie Goldberg, who is often critical of charter schools.

“We have one system that has never had much accountability,” Goldberg said, referring to charter schools. “And now it does, finally.”

But charter school leaders argue that the district’s policy would add regulations that do not follow the letter of the law. Their biggest concern is that the policy allows the school board to consider a charter school petitioner’s facilities plan and reject the petition if it determines that the plan doesn’t benefit the community where the school proposes to locate. That applies to both new charter schools and existing schools that try to move to a new facility.

Marcia Aaron, CEO of KIPP SoCal, one of the largest operators of charter schools in L.A. Unified, said KIPP schools often start out in temporary locations before moving to permanent sites. Now, she said it will be more difficult for schools to change facilities if L.A. Unified’s policy is implemented as currently written.

Aaron described a hypothetical situation where KIPP has financed and built a new facility for an existing school to move into, only to have the facilities plan rejected by the school board. Aaron said KIPP would then be left paying for two facilities: The facility where the school is already operating and the new building.

“And the ramifications of that are significant, because you can’t afford two sites,” Aaron said, adding that some KIPP schools in Southern California “have had to move four or five times in their lifetime.”

The new policy may also make it more difficult for charter schools to share campuses with district schools, known as co-location. If a charter school wants to co-locate on a district campus, the charter school must provide “detailed information and analysis regarding the specific” district site where it wishes to locate, according to the policy.

The union representing teachers in the district, United Teachers Los Angeles, has called for a moratorium on new co-locations during the coronavirus pandemic. The union argues that co-locations would make it more difficult to follow public health protocols, such as physical distancing, since students from two schools would be sharing one campus.

Goldberg said the district has no choice under the new law but to consider facilities because of Proposition 39, the state law approved by voters in 2000 that requires districts to offer facilities to charter schools that are “reasonably equivalent” to other district facilities.

Some existing charter schools in Los Angeles feel at risk of being shut down completely under the new law.

Based on their performance on the California School Dashboard, existing charter schools are grouped into one of three categories: high-performing, middle-performing or low-performing. The dashboard is the state’s system for assessing school performance based on multiple factors, including test scores, suspensions and college readiness.

When evaluating middle- and low-performing schools, school boards must give significant weight to measures of academic performance on the dashboard, such as standardized test scores. Charter school advocates want the district to also consider student growth — data the district collects that measures how individual students progress from year to year.

Charter school supporters hope the California Department of Education will encourage districts to consider growth data. The department is currently developing regulations that are expected to provide more clarity to school districts as they move to implement the law.

Thurmond wrote in a memo to the State Board of Education dated May 29 that department staff “has reached out to stakeholders to solicit written feedback on the areas where regulations may be needed and is in the process of reviewing comments.” A department spokesperson said in an email that the department is expected to propose regulations to the state board by January.

“I will say that each of the schools that we have, I stand behind the excellent work that’s happening every single day, and a closer look at year-over-year student growth actually tells that story,” she said.

To avoid being closed, low-performing schools will have to demonstrate to the school board that they are “taking meaningful steps to address the underlying causes” of their low performance, the district’s policy states. They must also present “clear and convincing data” that demonstrates either increases in academic achievement or strong postsecondary outcomes, according to the district’s policy.

Alfonso Paz, executive director of one of the district’s low-performing charter schools, Apex Academy in Hollywood, said he is “100% concerned” that the school will be closed when it is up for renewal in 2022. Apex Academy in 2019 scored below average on several areas of the dashboard, including graduation rates and student performance on both math and English standardized tests.

“It is literally the death knell for us if we don’t fight back,” Paz said.

School board member George McKenna said he believes many of the low-performing charter schools are trying, “but their results are embarrassingly low.”

“I’ve tried to help them by saying we’ll give you another shot at the apple,” McKenna said in a school board meeting last month. “But we’re down to the core now.”