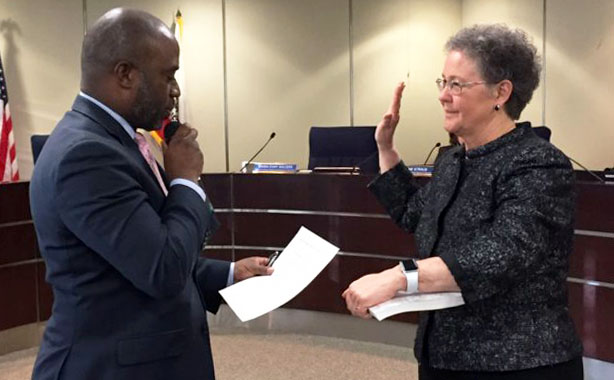 Says she is committed to working with Gov. Newsom to achieve education goals.

Photo: Janet Weeks/SBE
Linda Darling-Hammond is sworn in by State Superintendent of Public Instruction Tony Thurmond as president of the State Board of Education in Sacramento on March 14, 2019

Photo: Janet Weeks/SBE
Linda Darling-Hammond is sworn in by State Superintendent of Public Instruction Tony Thurmond as president of the State Board of Education in Sacramento on March 14, 2019

Ending considerable speculation in media and education circles, Linda Darling-Hammond, the president of the California State Board of Education, says she is committed to staying in California, and is not interested in becoming the next U.S. Secretary of Education.

Darling-Hammond is currently heading up the education transition team for President-elect Joe Biden.  She had been viewed as a top prospect to become education secretary in a Biden cabinet. But, she said, “I want to get that speculation out of the way.”

“I am not interested in that role,” she said. “My commitment to Gov. Newsom and the California agenda that we are pursuing through the State Board of Education are paramount to me.” She said she had told Gov. Gavin Newsom of her intention to stay in California.

“She is a vital leader in my administration, and is instrumental in advancing our shared objectives to expand equity, set the course to universal pre-K, and prepare all students for success in college, careers, and civic engagement—especially as we manage the impacts of COVID-19,” Newsom said in response to this development. “I am thrilled that Linda will continue to architect and drive our vision for education in California, in addition to advising President-Elect Biden and his transition team as they chart a better course for our students nationwide.”

California’s public school system serves 6.2 million children, or 1 in 8 public schoolchildren in the U.S., and more than the total public school enrollment in many countries. It also has the highest proportion of poor children of any state.

Darling-Hammond also headed up the education transition team for President-elect Barack Obama in 2008, and there was similar speculation that she might be his secretary of education. Obama ended selecting Chicago schools superintendent Arne Duncan for the position.

Darling-Hammond is one of the nation’s foremost education researchers and policy analysts. She is a professor of education emeritus at Stanford University’s Graduate School of Education, where she was on the faculty for several decades. She left Stanford in 2015 to establish the Learning Policy Institute, a research and policy organization based in Palo Alto, where she is currently president.  She said that continuing the work at the Learning Policy Institute was also a major factor in her desire to stay in California.

Darling-Hammond had been an education advisor to Gov. Jerry Brown, where she championed state funding for teacher residencies and other programs to expand the teacher workforce, among other priorities. Shortly after being elected, Gov. Newsom named her to head the 11-member State Board of Education in February 2019. She assumed the unpaid position at what she described at the times as “a critical moment in California education.”

California had introduced a series of landmark education reforms beginning in 2013. Those included the Local Control Funding Formula, which targets additional funds to low-income students and English learners, and a new accountability system based on multiple measures, not just test scores. The state also put in place a support system designed to help rather than punish struggling schools.

When Newsom appointed her to the board, Darling-Hammond said she was interested in “continuing that very strong reform trajectory,” while “taking it to the next level.” She emphasized that making reforms work can take many years. “Any state or nation that has improved education outcomes has had a 15- to 20-year trajectory and stayed the course” with reform initiatives, she said.

The coronavirus pandemic has interrupted the implementation of some reforms. The state board and all education institutions in the state are grappling with the more immediate challenge of educating children via distance learning with a minimum of learning loss, and, increasingly, how to get students and staff back to school safely for face-to-face instruction.

Darling-Hammond said were she to become secretary, “it would undermine our ability to reach the goals we are committed to achieving in California. I am determined to follow through on that commitment.”

Carl Cohn, the former school superintendent in Long Beach and San Diego who also served on the State Board of Education, said that if Darling-Hammond were to head the State Board for eight years, as did her predecessor Michael Kirst during Gov. Brown’s last eight years in office, that would assure 16 years of policy continuity in California.

“That is something that would be unprecedented in most states,” said Cohn, who was the founding director of the California Collaborative for Educational Excellence. “It is very important that there be continuity of leadership. If that is in fact what is unfolding, I applaud Linda’s commitment to our state and to seeing through 16 years of important returns of reforms based on local control and equity.”

Update: This report was updated on Nov. 10 to reflect confirmation of Darling-Hammond's role in the transition and remarks from Gov. Newsom.