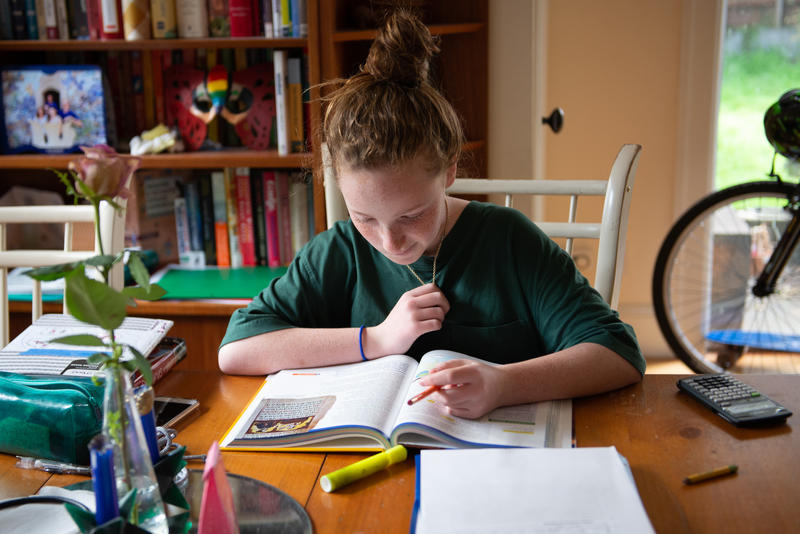 Photo: Kate Munsch/San Francisco Chronicle/Polaris
Juliette Schoenberger, 11, a 6th-grader at Oakland's Claremont Middle School, does school work while she and her family self-isolate during the shelter-in-place order in March due to the coronavirus pandemic.

Photo: Kate Munsch/San Francisco Chronicle/Polaris
Juliette Schoenberger, 11, a 6th-grader at Oakland's Claremont Middle School, does school work while she and her family self-isolate during the shelter-in-place order in March due to the coronavirus pandemic.

As school communities embrace distance learning, districts are now trying to figure out how to fairly grade students for the rest of the semester while their campuses are closed and they get instruction online.

The state has issued detailed guidance, telling districts they can revamp their grading systems but leaving the details up to local educators to decide.

But the state is advising that students be “held harmless” for their spring grades — in other words, they should not receive worse grades than those they were were already on track to receive before the virus pandemic shut down schools for the rest of the school year.

Of the six largest California public school districts, five have changed their grading systems to hold students harmless for their spring grades. Elk Grove Unified, south of Sacramento, is the only one to continue with a traditional grading system.

Los Angeles Unified, San Diego Unified and Fresno Unified have all adopted policies ensuring that students’ grades don’t drop lower than they were before distance learning began. Long Beach Unified is switching to a pass/fail and credit/no credit system, and San Francisco Unified is considering giving all students A’s for the spring semester. 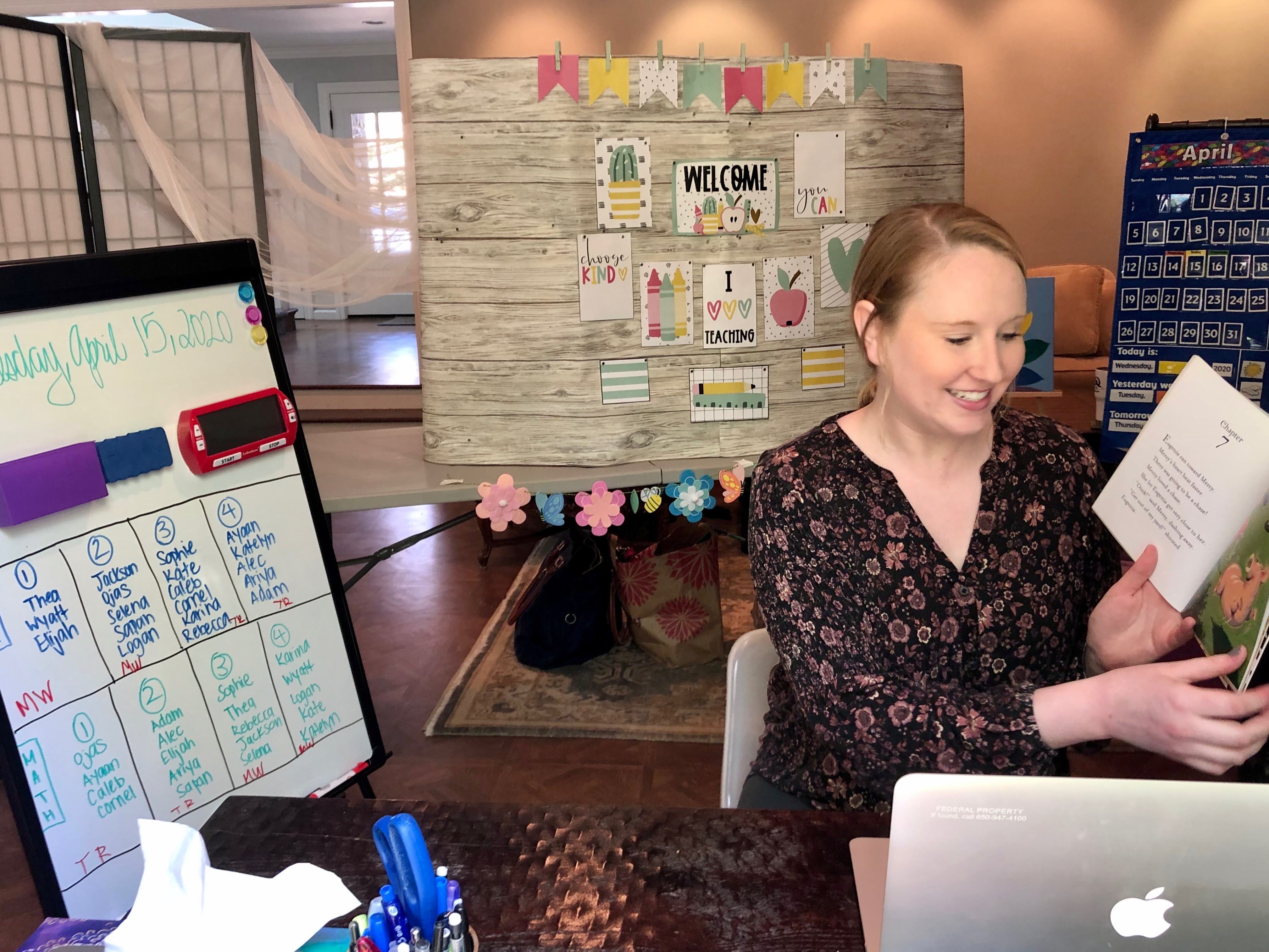 One of educators’ top concerns is that, for a range of reasons, not all students will have equal access to distance learning; low income students in particular will be disadvantaged, especially those students who lack computers or internet access. Some educators argue that it therefore wouldn’t be fair to award regular grades to all students.

Long Beach Unified — the fourth largest district — emphasizes teachers giving students feedback in its plan for distance learning. Like many districts, Long Beach is implementing different grading systems depending on the grade level of the students. The district’s distance learning plan says there will be no report cards for the second quarter. For grades 6-8, the district suspended grades for the third quarter saying it embraces a “do no harm” philosophy using pass/fail grades “but also incentivizes the completion of home learning assignments.” For grades 9-12, the district adopted a credit/no credit approach with the same values of no harm and giving students incentives to work at their assignments.

“High schools traditionally have used the credit system, but the elementary and middle grades have not,” said Chris Eftychiou, district spokesperson. “Moving to credit/no credit grading will benefit high school students who have college aspirations. All CSUs/UCs and many Ivy League schools and other universities nationally are accepting credit/no credit grades during this pandemic.”

The California State University and University of California systems have both agreed to accept pass/fail or credit/no credit grades for winter, spring and summer 2020 in lieu of letter grades for all courses, including the A-G course sequence required for admission to the university systems.

For others, such as Elk Grove Unified, south of Sacramento, grading will remain the same: students will receive letter grades on their report cards, and run the risk of getting an “F” if they fail to complete their online course requirements.

Los Angeles Unified declared that no student will receive a grade that is lower than their grade as of March 13, and promised that no failing grades would be issued this semester. San Francisco Unified could be taking that concept a step further: At a meeting April 14, board members discussed not only refraining from giving out “F’s” this semester, but giving every high school and middle school student an A. They are expected to vote on the proposal on April 28.

“It really is not a time to impose grading,” San Francisco Unified school board member Alison Collins said in an interview. “We need to focus on student well-being, and students’ basic needs like food and device employment.”

Though Collins said learning is still important during this time, she said she doesn’t think students should be held to the same standards they were held to at the start of the semester — especially since students have different computer resources and varied internet access. She also believes many educators and college admissions officers will consider this semester a wash.

Education Trust-West, an Oakland-based advocacy organization, has called on all districts to move towards a pass/fail system in order to minimize the impact that the closures could have on students’ academic careers. The San Francisco proposal is “one way to do it,” Executive Director Elisha Smith Arrellaga said via email.

The organization conducted a survey of parents statewide and found that disproportionate numbers of low-income, Latino and African American families lack the technology needed for remote learning. Rather than worsen those disparities, districts should focus on making sure all students have the materials they need to continue learning at home, Arrillaga said.

“We should all be looking towards how to reduce the slide in student learning and provide resources to students who are the most in need now, through the summer and for the next school year,” Smith Arrillaga said.

Collins said she doesn’t think giving all students A’s will discourage them from participating. Students are motivated to participate in distance learning, not because of a grade, but because they want to learn, she said.

“Kids want to learn, and I think that we get in the way as adults, but especially when they’re at home on their own they want to see their friends, there’s community and they love their teachers too…” Collins said at the school board meeting. “They want to learn and it’s on us as educators to use this time to say, ‘it’’s weird now, let’s use this in a new way. What do you want to learn, what books do you want to talk about?’”

San Francisco’s grading proposal stands out among Bay Area districts. Like most districts, Oakland plans a credit/no credit approach and West Contra Costa is poised to adopt a similar plan. Some districts have yet to decide how they will handle the complex issue.

Elk Grove Unified is sticking with its traditional letter grading system in an effort to “maintain some normalcy” during these uncertain times, district spokeswoman Xanthi Pinkerton said.

Elk Grove teachers are still expected to consider students’ circumstances when grading their work. Teachers will be adjusting the curriculum to work for distance learning. The school district has also gone to great lengths to make sure all students are equipped with the educational resources they need, and that students who don’t have a computer at home are provided a Chromebook, she said. Counselors are regularly reaching out to juniors and seniors to make sure they are on track, Pinkerton said.

“It’s a matter of looking at what students can achieve and making sure they can still attain mastery and get what they need for those courses,” Pinkerton said.