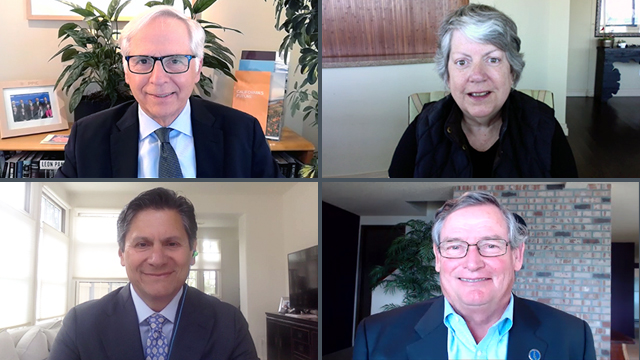 The leaders of California’s three public systems of higher education on Friday all urged the state’s voters to approve a ballot measure that would return affirmative action to admissions, retention and hiring efforts on their campuses.

The top administrators — University of California president Janet Napolitano, California State University chancellor Timothy P. White and California community colleges chancellor Eloy Ortiz Oakley — described themselves as strong supporters of Proposition 16 on the Nov. 3 ballot. That measure, recently approved by the state Legislature, will overturn the 1996 ban on considering race, ethnicity or gender in admissions, hiring and other programs at state colleges and universities.

The three leaders appeared together during an online forum, entitled “New Realities for Higher Education,” sponsored by the Public Policy Institute of California. While dealing with pandemic and financial concerns, the event was notable in that it was likely to be the last public gathering of the trio; Napolitano is leaving her office next month and White is expected to depart his in December.

Beyond widening factors permitted in admissions considerations, adoption of Proposition 16 would allow academic support and counseling programs specifically targeted for racial or ethnic groups that show weaker graduation and retention rates than others, according to White. Helping more students to finish their degrees that way “will open up a huge opportunity that will only serve California well,” he said.

Oakley said passage of the new proposition would allow public colleges and universities to overtly encourage more young people of color to train for an academic career, with the goal to hire more black, Latino and other minority scholars as faculty. He said it would allow campuses to “create an intentional pipeline of faculty of color and faculty with experience of working with underserved students.”

Proposition 16 would repeal the 24-year-old Proposition 209, which bans affirmative action in state institutions. Opponents of the upcoming ballot measure say it will create a new form of discrimination that could value race more than academic achievement and that it could particularly hurt admissions of some Asian Americans into UC campuses.

In other matters, the three education officials also said that the current emergency shift to online learning because of the pandemic might provide long term benefits in improving distance learning and expanding opportunities for people who cannot easily attend traditional in-person classes. But they emphasized that California needs to ensure reliable broadband access across the state.

“Broadband for all,” Napolitano said several times during the hour-long forum. Better and universal Internet access, Napolitano said, is one of the most important goals “that arises from this pandemic” and would help to address inequities the crisis has revealed across education, starting with K-12 and into college. Coincidentally, almost at the same time, Gov. Gavin Newsom was holding his own press briefing in which he reiterated the need to connect all students to distance learning.

PPIC president Mark Baldassare, who moderated the event, asked the three about what they thought were the greatest challenges facing higher education in this time of Covid-19-related closures and reduced state funding.

White, who oversees 23 CSU campuses, said that getting sufficient resources to provide high-quality distance learning and keeping faculty, students and safe were major challenges. But he also alluded to controversies over what he described as “human behavior” — whether California residents will wear masks in public and stay the proper distance apart to reduce spread of the Coronavirus. “If we cannot get our fellow members of society to recognize that we can’t change the biology of this disease, we can only change our behavior about it, we are going to be in a world of hurt,” White said.

White, as he has in the past, warned that sharp restrictions on in-person teaching may last beyond the fall semester into the spring, and possibly longer. He urged people to start thinking about the pandemic as having “a much broader horizon,” perhaps more than two years. The CSU and UC systems will have mainly online classes in the fall, except for some labs and performing arts classes with limits on enrollment.

Napolitano, who helps administer ten UC campuses and five medical centers, said that she wanted to make sure that online learning is as good as in-person. She said it was most important that “our students are still learning, still making progress toward their degree and getting the kind of education they will need for the future.”

Many students at the state’s 115 community colleges and their families have been financially battered by the pandemic and the ensuing job losses, Oakley noted. “We have millions and millions of Californians who have very few prospects of employment in this current economy,” he said. So Oakley said public colleges need to “double our abilities to re-skill and up-skill Californians now” with job training and partnerships with employers.