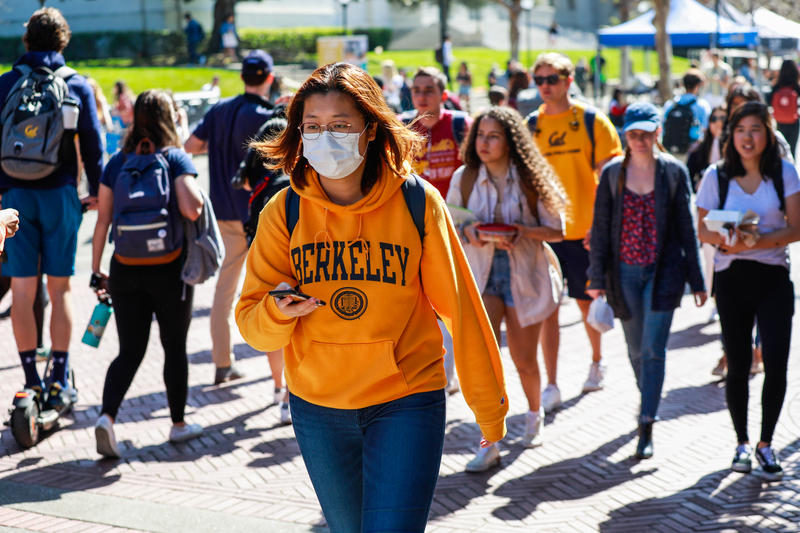 Photo: Gabrielle Lurie/San Francisco Chronicle/Polaris
Monica G. wears a mask while walking through the UC Berkeley campus. A Berkeley resident with nothing to do with the campus recently tested positive to the coronavirus.

Photo: Gabrielle Lurie/San Francisco Chronicle/Polaris
Monica G. wears a mask while walking through the UC Berkeley campus. A Berkeley resident with nothing to do with the campus recently tested positive to the coronavirus.

As the coronavirus spreads to more communities in California, California public health authorities have issued their first detailed guidance to K-12 schools as well as colleges and universities about how to respond to the coronavirus.

“It’s a question of when – not if – some California public schools will face closure because of COVID-19,” Gov. Gavin Newsom said in a statement accompanying the guidance issued on March 7. “School districts must prepare for these scenarios so that parents and children can plan for what would happen if their local school faced closure.”

In fact, his statement and the guidance were released just hours after the 64,000 student Elk Grove Unified, the state’s 5th largest district just outside Sacramento, had decided to close all of its 67 schools for at least the next week.

In a joint statement issued late Monday, “The Sacramento County Public Health Department and Sacramento County Office of Education will be collaborating with the 13 District superintendents to develop recommendations to implement the new state and county mitigation guidelines within the next 48 hours.”

Although local control is a core principle of K-12 school governance, the guidance, issued jointly by the California Department of Public Health and the California Dept. of Education, raised questions about the extent to which school districts would make the decision to close schools, and to what degree they need to make the decisions in tandem with local health departments.

GUIDANCE FOR SCHOOLS AND COLLEGES

The guidance underscored the different challenges facing K-12 and higher education institutions as officials consider responses to the virus.

UC Berkeley Monday suspended all in-person classes starting Tuesday through March 29, the end of the university’s spring break. “There are no confirmed cases on our campus at this time,” Chancellor Carol Christ said in a statement.  “However, as local, national, and global public health recommendations shift to include mitigation of transmission, the campus is proactively taking steps that will help to protect the community.”

Over the weekend, Stanford University announced, for example, that it would move all classes online in response to the virus for the next two weeks, in advance of its spring break, and many other colleges and universities are preparing for that possibility.

The University of Southern California will offer all of its classes online for three days this week (Wednesday through Friday) as a test run for a possible longer period of online instruction should that become necessary,

Over the weekend, UC Davis’s leadership, said the campus would continue with classes but encouraged “maximum flexibility,” and said “faculty or students who either should not or do not wish to attend in-person classes to complete the work of the quarter via alternate means.”

But K-12 schools in general don’t have the ability to offer online instruction, or for students to work independently, especially in the lower grades.  Closing schools involves not only the students themselves, but has a ripple effect on parents who have to stay home or make alternative arrangements to take care of their children.

At the same time, many institutions of higher education have students, faculty and staff living on campus, a complicating factor that K-12 schools don’t have to deal with.

The guidance advises schools what to do in response to four different scenarios:  when there is no one in the school or community  diagnosed with the virus, when there are two or more “community transmission” cases, but no one within the school tests positive; if one student, teacher, or staff member tests positive, and exposed others at the school; and student, teachers or staff members at multiple schools within a school districts test positive.

In the guidance, health officials present slightly modified scenarios — and responses — for institutions of higher education. The guidance is not restricted to whether a school or institution should close, if warranted under different scenarios, but recommends multiple other actions schools and colleges should be taking.

Newsom appeared to acknowledge the huge impact that closing K-12 schools has on an entire community.  “It’s also not lost on anyone that these scenarios would put significant stress on families– especially those with the least financial resources. Already, we are seeing how this outbreak is having significant economic impact on families, workers, businesses and communities across California.”

The decision to close the Elk Grove district over the weekend was made in consultation with local health authorities, but it has engendered considerable controversy.

What happened in Elk Grove, just south of Sacramento, seemed to fit the second scenario  described in the guidelines — in which there are two or more community transmission cases, but “nobody within the school community tests positive.” But in that case, the guidelines do not recommend closing a school, and certainly not an entire district.

It is not entirely unclear what circumstances led to the district’s decision to close all schools. The district announced that a family had been quarantined, and at least one family member had tested positive to the virus, although at the same time making it clear that no student or staff member had tested positive. EdSource has reached out to Elk Grove to provide more details on what led to the closing decision.

At an unusual press conference Sunday, Sacramento Mayor Darrell Steinberg “We’re not here to second guess any decision that has already been made,” Steinberg said. But he said that “going forward I am equally concerned about the massive closure of schools, public spaces and public events without clear protocol and without a collaborative decision-making process that includes our public health leadership.”

As schools around the state grapple with what do to different scenarios, it is also becoming clear that there will be different responses to each situation, although guidance issued on Saturday may bring more uniformity to the decision making process.

School officials in San Francisco reacted in a completely different fashion to what appeared to be a somewhat similar situation to Elk Grove’s.  In San Francisco, Lowell High School will remain closed Monday after a parent of a student tested positive to the virus, although the student did not test positive.  But all other schools in the district remain open.

At Murrieta Valley High School in Riverside County, 71 students were placed in “self-quarantine” after a school employee tested positive for the virus.  The employee had apparently visited a country where the virus was spreading.  The school was closed on Friday, and will remain closed on Monday for cleaning.