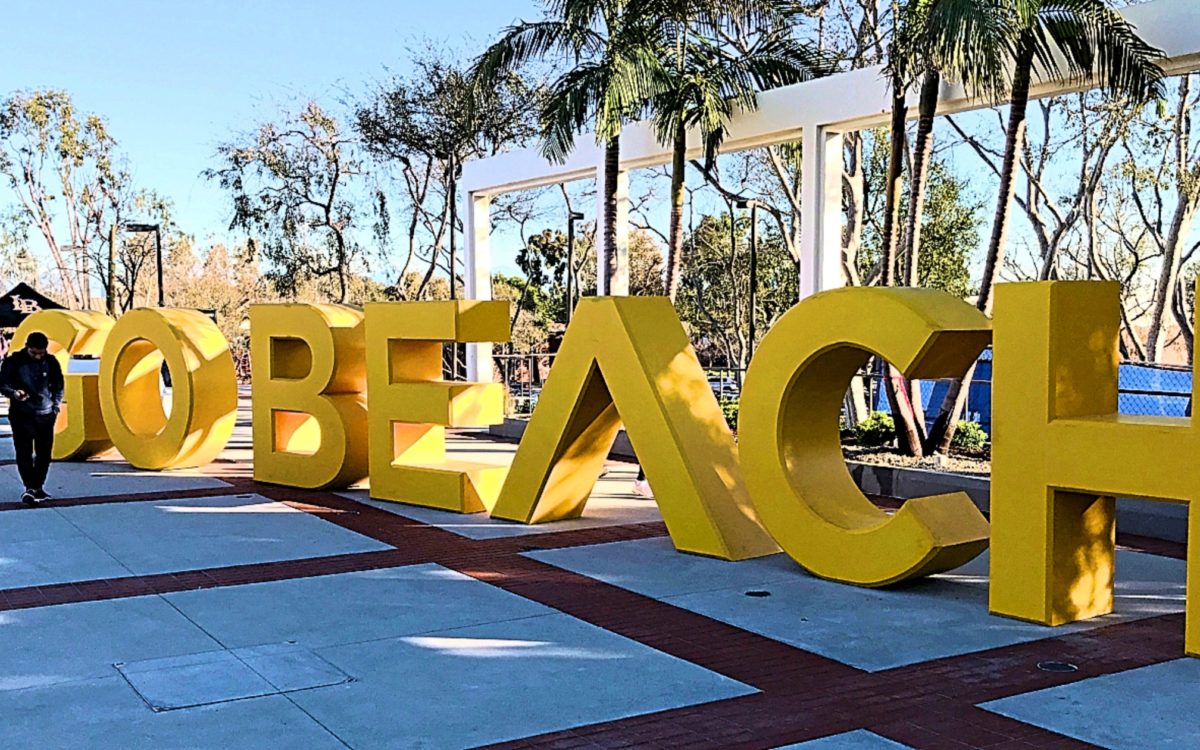 As all 23 California State University campuses are under pressure to improve their graduation rates, Cal State Long Beach has shown the biggest gains in getting students who entered as freshmen to finish within four years.

Its success, however, is not a guaranteed model for other campuses that are lagging and face challenges in keeping students in school, including housing costs and weak preparation for college math classes.

Recently released statistics for 2019 show that Cal State Long Beach pushed its graduation rate up by 18 percentage points to 34 percent since the systemwide 2025 Graduation Initiative began four years ago. That plan, which gives each campus target graduation rate goals for 2025, has received $225 million in state funds so far.

The Long Beach campus is getting close to its goals of graduating 39 percent of freshmen within four years and 77 percent within six years. Across the CSU system, progress is particularly strong among transfer students and freshmen who finish in six years.

But officials say there is no single magic formula that can help bolster all graduation rates. While overall improvement is clear, CSU campuses showed vastly different graduation rates at the start and a wide range of results halfway through the initiative.

Look at 2019 CSU graduation rates for freshmen and transfer students and goals for 2025.

Brian Jersky, Cal State Long Beach’s provost and senior vice president for academic affairs, attributed the gains on his campus to “a whole lot of little things a whole lot of people have done over many years.”

Among its efforts, that campus and others are using extra state funding to hire faculty and provide more classes to meet student demand, especially in required courses. Long Beach and others also are pushing students to take more credits per term.

Another fruitful reform is the paying of summer tuition if students need just one or two classes to finish their degrees in four years, Jersky said. That change, he estimated, increased the graduation rate by about 2 percent and is “an example of a small thing that makes a bit of a difference.”

Cal State East Bay is undertaking many of the same efforts as Long Beach. But its four-year graduation rate dropped in the last year by 4.5 percentage points to 12.1 percent.

Most of the problem is attributed to the fall 2018 change in its academic calendar from three quarters to two semesters a year, according to Edward Inch, provost and vice president of academic affairs. As the change approached, some students getting close to graduation added to their course load so they could finish without having to deal with the new calendar. But it took a while for many other students to adjust and take enough courses for a timely graduation track, Inch said. That now seems to be improving.

Part of a systemwide trend, the East Bay campus adopted the semester system so students can build stronger connections to professors and have more time to learn material and receive tutoring if needed. The fast-paced quarter calendar did not allow “enough time to really be able to intervene and make a difference,” Inch said.

Jeff Gold, the CSU system’s assistant vice chancellor for student success initiatives, said it is more important to look at changes over the course of the initiative, not just annually. “We as a system are continuing to make excellent progress toward our goals,” Gold said. But he added that administrators “are concerned about campuses that are not making the type of progress” that’s expected.

Across the CSU system, the data also shows:

At San Francisco State, the four-year graduation rate for freshmen declined slightly this year and has grown only about six percentage points since 2015. A lot of that was caused by students leaving the university after the first or second year because of rapidly escalating off-campus housing prices, according to its president Lynn Mahoney.

In response, San Francisco State “is trying to build housing as fast as we can,” Mahoney said. A 560-bed residence hall is under construction and plans are afoot to add as many as 2,000 more on-campus beds in the near future.

Beyond housing, the campus has started freshman seminars that help create a sense of community and added more course sections. It also is about to launch a new counseling system, under which all first-year students meet with specially trained advisers rather than relying on counselors in academic departments or majors to provide the advice. That is thought to be particularly helpful for students who have not declared majors.

CSU Channel Islands, which opened in 2002 and is CSU’s newest campus, has done well with getting transfer students to graduate, mainly because it began as a more transfer-focused institution with close ties to community colleges in Ventura County.

But officials say they were slow to respond to issues hurting rates for students who enter as freshmen. Since 2015, their four-year graduation rate dropped about two points to 23.3 percent.

Most students there are considered low-income and the first in their families to attend college. Those students are more likely to struggle with college math and potentially drop out if they fail it, according to Amanda M. Quintero, associate vice provost for student success and community engagement. 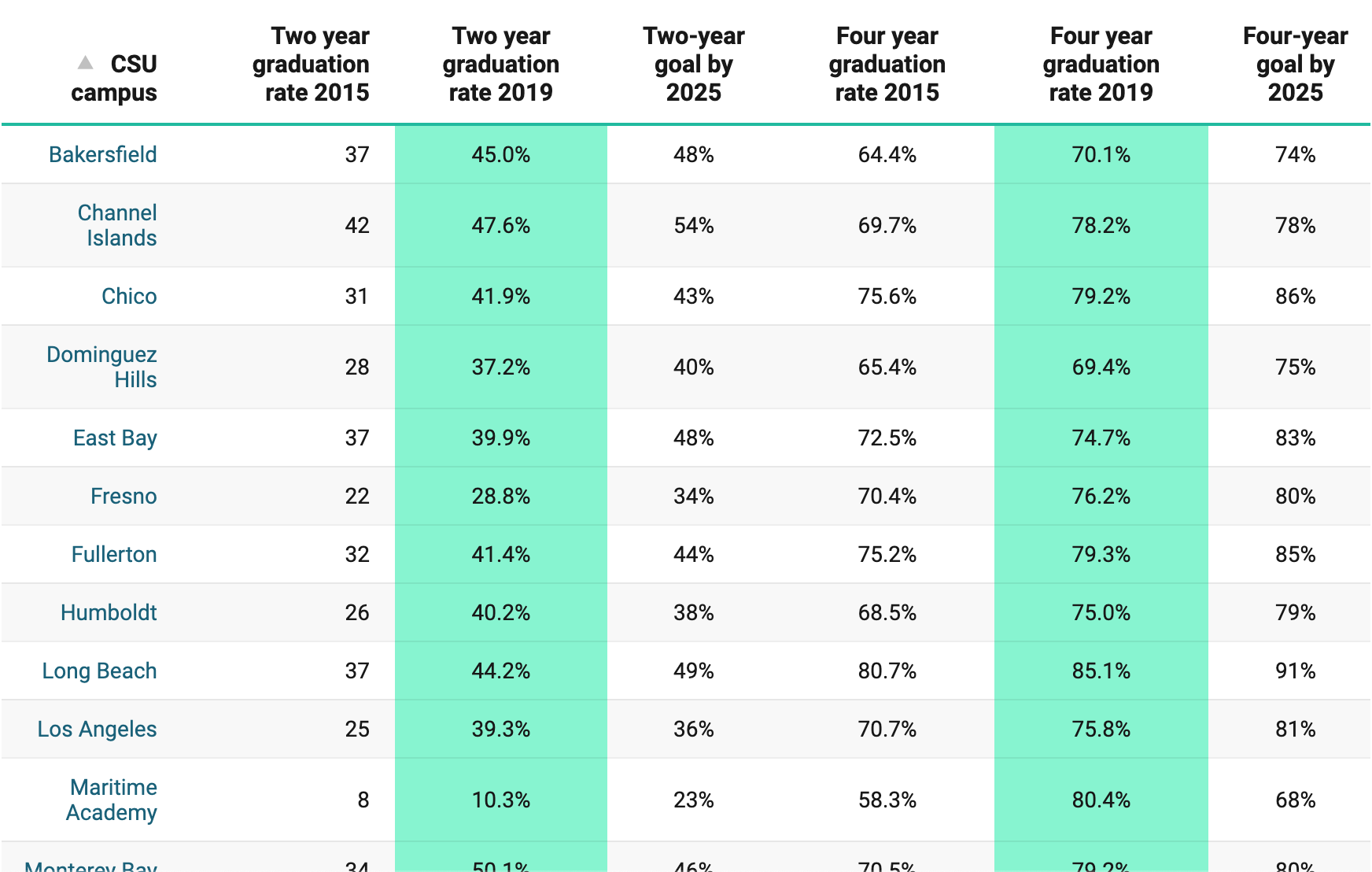 Graduation rates for transfer and non-transfer students in CSU, 2019

The situation now is improving as the CSU system has replaced no-credit remedial math with credit-bearing courses that provide more tutoring and support, she and others said. In addition, the campus has improved freshman counseling and intervenes more quickly if students flounder, she said.

“We are making an intentional effort to really focus on what we need to do differently to serve the students we have,” Quintero said.

CSU leaders said they were pleased with continuing progress when systemwide statistics for 2019 were released in October. The share of incoming freshmen who finished in four years rose from 19.3 percent in 2015 to 27.5 percent now, with a goal of 40 percent. Similarly, the six-year rate rose from 57.3 percent to 62.1 percent over that span, with a target of 70 percent.

Each campus has different goals. Four-year graduation targets for freshman range from 30 percent to 71 percent. Six-year goals spread from 55 to 92 percent. Goals are based on each school’s starting points, socio-economic demographics of student populations and comparisons to similar institutions nationwide.